As part of my job as membership executive for Worcester Railers HC, I reach out to as many people as possible, trying to sell season tickets. Over the summer I happened to call the co-founder of Worcester Sun, Mark Henderson. 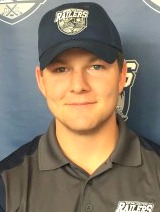 Mark, who was very happy that the Railers were filling a void in Worcester and Central Massachusetts, bought two memberships with the team. Like any good salesman, I wanted to follow up with him. I met Mark on an afternoon at his co-working space at the Worcester Idea Lab on Franklin Street.

When I walked in, we started to talk. When I walked out, I had an assignment: Mark noticed my affinity for the city and asked me to put what I said on paper.

While I am not from Worcester, I’d moved to the city this past May — and soon I didn’t want to leave. When I started work with the Railers in April after five years in the U.S. Marine Corps, I had little experience in sales, had never worked in sports, and practically every potential customer I called knew Worcester better than I did. But I was not oblivious to the opportunities the city offered me and my young family.

I had grown up in the Pioneer Valley spending a lot of my time traveling around Massachusetts playing youth hockey for teams like the Springfield Pics. I was familiar with the hardships that cities like Lowell, Springfield and Worcester faced. After being away from Massachusetts the past few years, my wife and I came to Worcester to meet with the Railers, and we were hooked.

Cliff Rucker, the team’s owner, had made and still is making significant investments in the city. When a person like Cliff says to come to Worcester, you come. I quickly developed a growing and still deepening admiration for the city, and wanted to ingrain myself in it.

My wife and I lived in Hawaii while I served in the military. As a Marine, I had the opportunity to visit cities such as Honolulu, San Diego and countless others. All of them had many things in common: They were overcrowded, expensive, and not friendly to new families trying to grow.

When we moved to a small apartment overlooking the Worcester Common in May, we had a completely different experience. The price we paid was reasonable, the location was more than ideal, and we had a comfortable springboard from which to start looking for a home in or around the city.

Influencing our decision to move to the Worcester area was my pursuit of education. In June, I began attending Harvard University full time to work toward a bachelor’s degree in economics. With Union Station a five-minute walk from where we lived, it seemed like everything was coming together. Rather than wrangle with a difficult commute into Cambridge, I could ride any of the morning trains that took me to South Station, connect to Wi-Fi and study on my way to class.

Anyone seeking higher education while also working knows how important it is to maximize your time. The commuter rail into Boston did just that. And I was not the only person taking advantage of this, as I saw many familiar faces each morning, which was a good sign.

Another positive indicator was all the investment being made in the city, from our apartment complex on the Common to all the restaurants, old and new, lining Shrewsbury Street. Working for the Railers, I saw many of these investments up close and personal, such as the twin rinks being built in the Canal District, where public and private investments were made.

Coming from a city like Honolulu, where there wasn’t such rapid economic growth, I was shocked to see all the construction happening around the CitySquare project.

My wife, Emily, and I could not have been more impressed. When we began putting together all the pieces of our financial puzzle, we realized we were in a unique position. If we had decided to live somewhere between Boston and Worcester, we’d be struggling instead of thriving. And if it weren’t for an offer we couldn’t refuse — and an opportunity for Emily to pursue her dream — there’s a good chance we’d be living in Worcester today.

But a short drive west down Route 20 we found our home in Southbridge, where my wife will have enough property and existing equipment to find her way in the world of therapeutic horseback riding. If we could have pulled this off in Worcester, we would have.

Perhaps because I get an inside glimpse of the willingness of the business community to come together and support the Railers, I may be biased. Regardless of the company I work for, though, it is evident that this area is a great place to start and grow a family. For the reasons listed above, I am thankful for the many people I have met so far who have been genuinely helpful in my transition to Central Massachusetts.

I was told when first arriving here that Worcester was a tough city to move into, but so far in my experiences this could not be further from the truth.

Tymmothy Dore is a membership executive for Worcester Railers HC. He can be reached at tymmothyd@railershc.com.

One thought on “Tym Dore: Railers brought me to Worcester, city keeps me wanting more”