Warning: unlink(/tmp/blog-dIAxAa.tmp): No such file or directory in /home/customer/www/worcester.ma/public_html/wp-admin/includes/class-wp-filesystem-ftpext.php on line 116

Warning: unlink(/tmp/full-width-image-XpXrwu.tmp): No such file or directory in /home/customer/www/worcester.ma/public_html/wp-admin/includes/class-wp-filesystem-ftpext.php on line 116

Warning: unlink(/tmp/full-width-image-f30jvo.tmp): No such file or directory in /home/customer/www/worcester.ma/public_html/wp-admin/includes/class-wp-filesystem-ftpext.php on line 116

Warning: unlink(/tmp/full-width-image-eHx3uX.tmp): No such file or directory in /home/customer/www/worcester.ma/public_html/wp-admin/includes/class-wp-filesystem-ftpext.php on line 116

Warning: unlink(/tmp/top-stories-nLkzeI.tmp): No such file or directory in /home/customer/www/worcester.ma/public_html/wp-admin/includes/class-wp-filesystem-ftpext.php on line 116

Warning: unlink(/tmp/legacy-three-column-yp7KX2.tmp): No such file or directory in /home/customer/www/worcester.ma/public_html/wp-admin/includes/class-wp-filesystem-ftpext.php on line 116 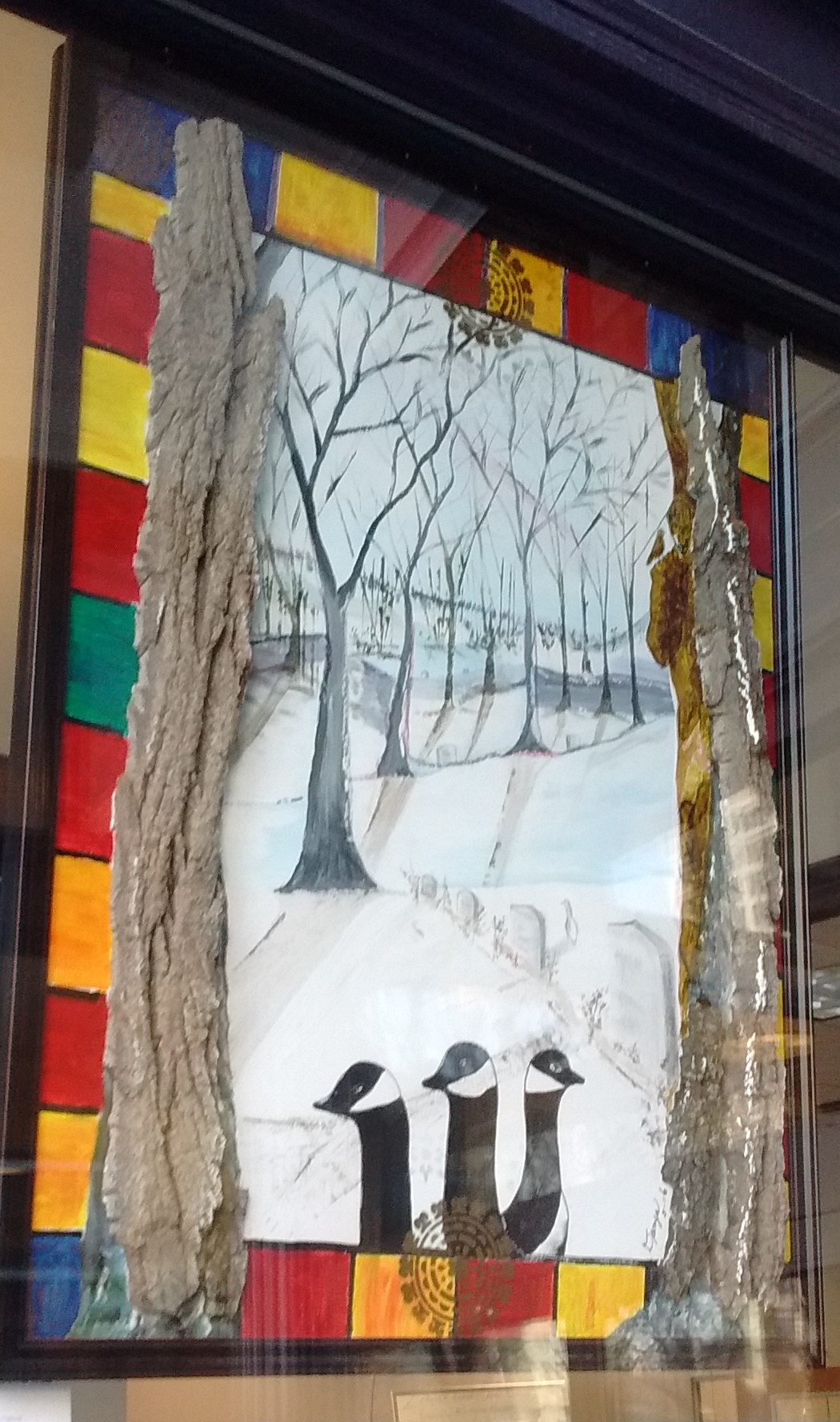 The Worcester Cultural Coalition is pleased to announce two Worcester Windows Winter exhibits are on display. “Worcester City Hall and Common” is located at the Community Gallery in the basement level of City Hall, 455 Main St. “Let There be Light” is located at Bay State Savings Bank, 28 Franklin St. Both are free and open to the public.

Artwork on display at Bay State Savings is based on the theme of light and ranges from sunsets and landscapes to fall and winter scenes. They demonstrate an array of different art forms including mixed media, acrylic and oil  on canvas and photography. One participating artist whose work is on display is Nate Niles, a 13-year-old who created his “untitled” digital print on an iPad Mini with just his fingers. Other participating artists include: Kyle Srrachan, Sharon Lindgren, Jackie Penny — check out our free profile of Jackie’s Hanover exhibit last winter — Cathy Weaver Taylor, Lia Valentine, Darya Kuruna, and Mia Gajdzinski. 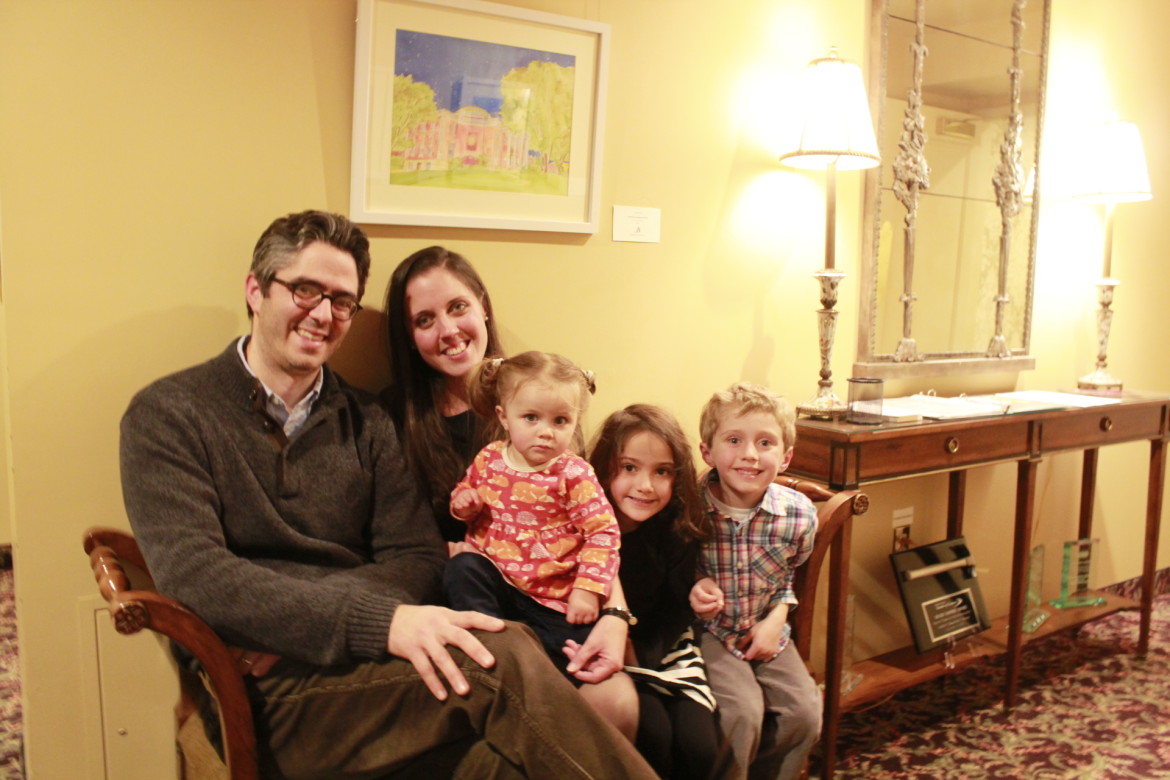 Jackie Penny sits beneath one of her paintings with husband Tony, youngest daughter Lydia and twins Sophia and Henry at the reception for her new Hanover Theatre exhibit.

The Worcester Cultural Coalition in collaboration with Preservation Worcester, The Seven Hills Camera Club and the Worcester Alliance of Photographers present “Worcester City Hall and the Common.” Worcester’s grand City Hall is the architectural centerpiece of the heart of our city. Designed by Boston architects Peabody & Stearns and dedicated in 1898, it was conceived as a “Palace for the People.” Outside, its fortress-like tower is a city landmark. Inside, its barrel-vaulted grand staircase is truly impressive.

All of these striking images of City Hall and the Common have been beautifully captured and are on display for the public. Curated by Priscilla Messinger of the Worcester Alliance of Photographers, artists whose works are on exhibit include: Charyl Rosen, Don Ricklin, Christine Sendrowski, Bob See, Priscilla Messinger, Michelle French and Ted Theodore.

Holy Cross is one of a select group of colleges and universities that accept students regardless of their ability to pay (“need-blind admissions”) and then meet 100 percent of demonstrated need. Nearly two-thirds of Holy Cross students receive some form of aid.

The rankings will appear in the February 2017 issue of Kiplinger’s Personal Finance, on newsstands Jan. 3.

Joined by two Anna Maria staff members, student volunteers will take on a variety of construction assignments in a Habitat for Humanity home-building project. Students will spend time learning more about Georgetown’s Habitat for Humanity Chapter and have the opportunity to explore the surrounding area. This is the fourth consecutive year for Anna Maria students using their winter and spring breaks for volunteer service.

“Service is a core value at Anna Maria and our Alternative Winter Break allows students with a passion to serve others to participate in a part of the country that needs help,” said Anna Maria College President Mary Lou Retelle. “Many of our students are aspiring to serve their communities as future nurses, firefighters, social workers, teachers and law enforcement professionals. Experiences in the field like this one help shape their perspectives and ultimately makes them better community leaders.”

Naughton named to board of Council for a Livable World

Council for a Livable World’s board of directors recently gathered for its final meeting of 2016. The board elected state Rep. Harold P. Naughton Jr., as one of its two newest board members.

“We are honored to have Representative Naughton and Mr. [Nicholas] Clark join our board of directors,” said John Tierney, Council for a Livable World’s executive director and member of Congress from 1997 to 2015. “Both gentleman bring a unique and deep understanding of international security, arms control and non-proliferation that will help guide the organization during an uncertain political era.”

He serves as the chairman of the Joint Committee on Public Safety and Homeland Security, and is an appointed member of the State Department’s International Security Advisory Board, which advises the department on arms control, international security and other policy areas. He is a Commissioned Officer (Major) in the U.S. Army Reserve, and a veteran of the wars in both Iraq and Afghanistan. Naughton is a recipient of the Bronze Star Medal, Combat Action Badge, Meritorious Service Medal, and 15 additional military awards.