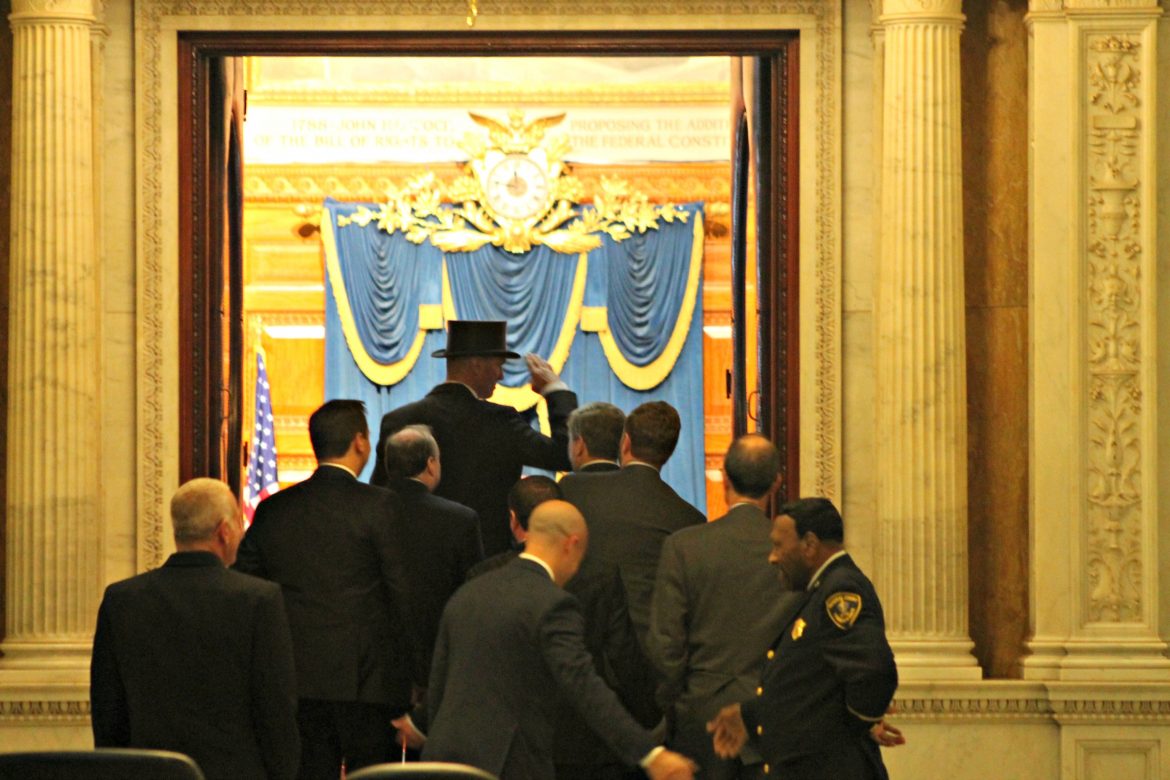 As the state Legislature enters a new session, Worcester is at the top of the agenda -- and now more innovation is coming to the city.

The new year got underway on Beacon Hill last week with a flurry of the pomp and circumstance that marks the beginning of every two-year legislative session followed by the quiet of 15 newbie lawmakers getting to know their surroundings, while veterans prepare for the battles to come.

Gov. Charlie Baker played the role of master of ceremony, swearing in the still heavily Democratic Legislature that he will work with well into his likely re-election campaign, while the lawmakers themselves reupped in the trust department, turning again to House Speaker Robert DeLeo and Senate President Stanley Rosenberg to guide them on their journey.

Minority Leaders Bruce Tarr in the Senate and Brad Jones in the House also got another vote of confidence from their caucuses to continue to lead the opposition, the little there is of it.

Republicans will make up just more than 20 percent of the Legislature to start the session.

DeLeo, who is soon to turn 67 and two years removed from scrapping the term limits that would have forced him into an early retirement this month, has a chance to become the longest serving speaker in state history. 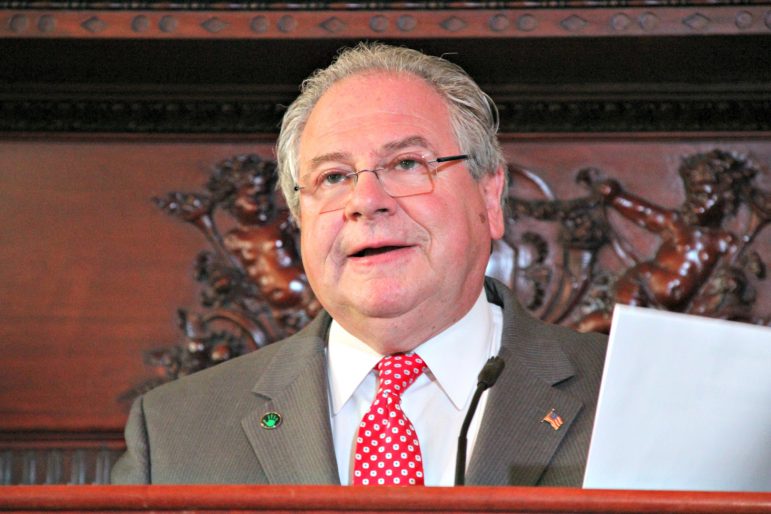 Should he finish this two-year term, DeLeo will pass Tom McGee and hit the decade mark as the House’s top Democrat.

“To break records or terms of longest speaker is not foremost in my mind, quite frankly,” DeLeo told reporters about his reign. What is foremost on his mind, however, will have to wait at least a few weeks until he outlines his goals for the coming two years in speech to the members.

Criminal justice reform, early education expansion, a living wage, paid family leave and even self-driving cars all made Rosenberg’s list of issues to address in the weeks and months ahead. He also urged the Senate to reach for revenues where they could be found to invest their way to success, but stopped short of calling for a broad-based tax increase beyond the income surtax on millionaires that he supports for the ballot in 2018.

Instead, Rosenberg called for taxing Airbnb and closing “loopholes” in the tax code that no longer serve a purpose, and on those fronts he may find little argument from DeLeo or Baker.

Allowing @DCAMM_MA to work with the WBDC to bring biomanufacturing jobs to #Worcester is a tremendous opportunity. https://t.co/D0h1tA32Bw pic.twitter.com/90Z5Q2tkD9

BOSTON – Gov. Charlie Baker signed legislation Friday, Jan. 6, to facilitate the transformation of unused state-owned land in Worcester into a site for biomanufacturing.

An Act Authorizing the Transfer of Certain Parcels of Land in the City of Worcester to Promote Economic Development (H. 4774) authorizes the commissioner of the Department of Capital Asset Management and Maintenance (DCAMM) to sell 44 acres of land at the Worcester State Hospital campus to the Worcester Business Development Corporation (WBDC) for the purpose of developing the site into a biomanufacturing industrial park.

“This bill is critical to the continued growth and prosperity of my district,” Senate Majority Leader Harriette L. Chandler said. “The statutory changes would provide the framework for a new biotechnology park, bringing jobs and opportunity to our community. Worcester is on the cusp of becoming a destination for this burgeoning industry and this legislation is the next step towards a very bright future.” 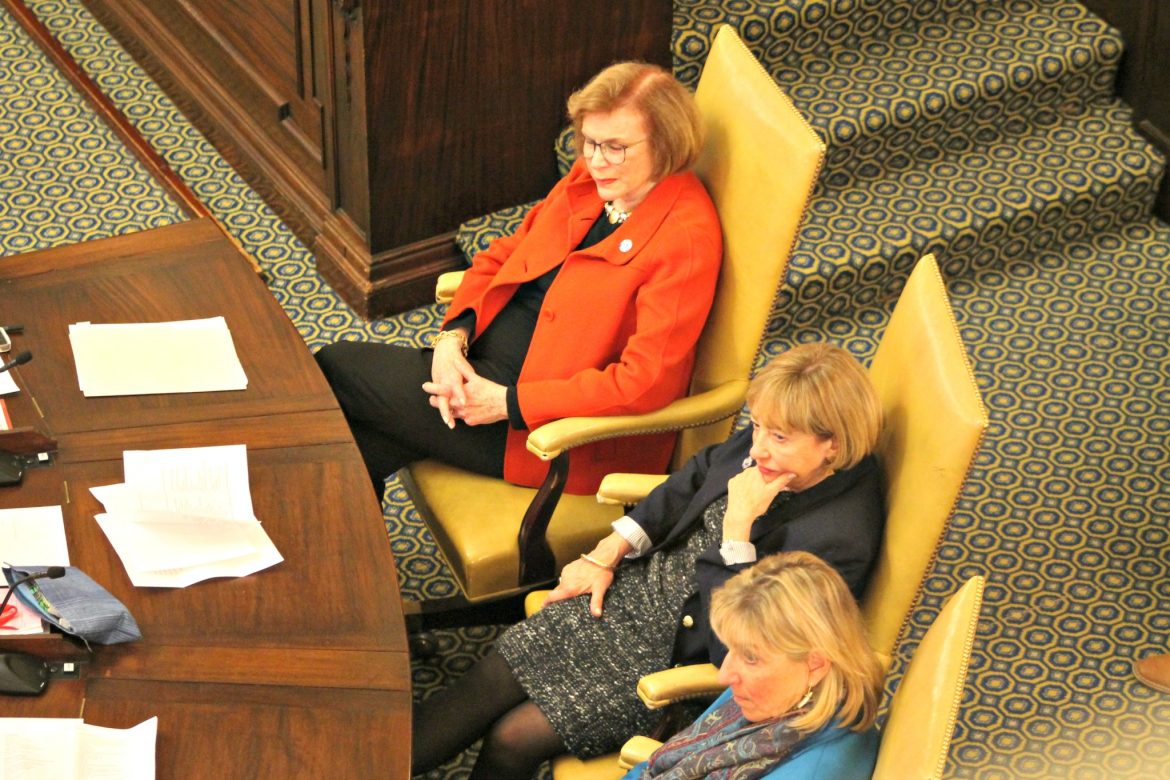 The redevelopment of the land is part of the commonwealth’s ongoing Open for Business Initiative that seeks to redevelop underutilized state assets into productive pieces of our state economy. At full capacity the new site will have the potential to create more than 500 well-paying jobs in Central Massachusetts.

“When we first developed the Open for Business initiative, projects that could transform unused state property into revitalized centers for business and economic activity is exactly what we had in mind,” Baker said. “Allowing DCAMM to work with the WBDC so that they can bring biomanufacturing jobs to Worcester is a tremendous opportunity for the commonwealth and I want to thank Rep. [James J.] O’Day and Sen. Chandler for their help making this possible.”

“Massachusetts is a national leader in the life sciences and advanced manufacturing technologies and the redevelopment of this site ensures a Central Massachusetts hub for a continually expanding industry,” Lt. Gov. Karyn Polito said.

“This will bring initially 150 jobs to the city and the arrival of LakePharma can only mean good things for the city of Worcester moving forward. I’d also like to thank my colleagues in the legislature for such a swift passage of the bill,” O’Day said. “The Worcester Business Development Corporation has extensive local development experience and has successfully completed notable projects like the Massachusetts Biotechnology Research Park, Gateway Park, and Centech Park.”

More than 40 near-term opportunities throughout Massachusetts and across state agencies and authorities were first highlighted for public-private partnerships, of which seven are currently under agreement.

From a press release from the Office of the Governor

Amid priorities that might be familiar any other year, or century — wages, taxes and crime — Senate President Stan Rosenberg directed legislative focus to an issue that not long ago would have been the stuff of science fiction: self-driving cars.

“In as few as five years from now autonomous vehicles will again turn our world upside down,” Rosenberg told colleagues after being re-elected president of the Senate Jan. 4. The Amherst Democrat keyed in on public finance, legal liability and safety as challenges for lawmakers in regards to the new technology.

House members agreed autonomous vehicles present a number of policy considerations and the Baker administration has assembled a working group on the issue, which has already held its first meeting.

“We have to adapt and move more quickly,” Rosenberg told State House News Service after his speech.

“It’s even bigger than the Uber transition because it opens up a huge, huge number of issues. It’s about as transformative a technology as this is,” Rosenberg said, holding up his smartphone.

In November, Boston announced it had teamed up with Cambridge-based nuTonomy to test its self-driving Renault Zoe electric vehicle in the Raymond Flynn Marine Park in the Seaport.

Two engineers, including one behind the wheel, cruised around for an hour in an autonomous vehicle on Wednesday in the South Boston Seaport, the first test of its kind in Massachusetts, according to The Boston Globe. The ride-hailing network Uber began offering trips in autonomous vehicles in Pittsburgh last year.

While lawmakers have not determined how to approach the technology that might one day revolutionize transportation and other mobility issues, officials in Boston and the Massachusetts Department of Transportation have started to explore self-driving car policy.

In September, Boston announced it was selected by the World Economic Forum as a test site for developing autonomous vehicle policy, and in October Gov. Charlie Baker signed an executive order establishing an automated vehicles working group and setting out processes for approving vehicle tests.

“The hope is that through this working group established under the executive order we can work together to figure out if there is a legislative approach that’s needed. For the moment we’re doing it through existing regulatory means,” Transportation Secretary Stephanie Pollack said.

Rep. Angelo Scaccia, the dean of the House, and Rep. John Rogers, who came up on the losing end of a speakership fight in 2008 with DeLeo, begged off the vote to give DeLeo a fifth term as speaker.

In an odd move, the two men notified the clerk in advance that they would not be in the chamber for the vote and not to call their names.

While their exit after taking the oath of office may have spared DeLeo from a non-unanimous vote, it didn’t go unnoticed either. The speaker’s office was fuming, according to one person with knowledge of the reaction.

So why did they do it? Who knows. Neither would return calls seeking an explanation.

Scaccia in the past has tweaked House leadership for a consolidation of power that leaves many lawmakers, most willingly, in the dark. And Rogers’s history with DeLeo is not secret. But what changed this year from the previous four speakership elections when they voted for DeLeo remains a mystery. Perhaps it will be solved during the transition to the next speaker. 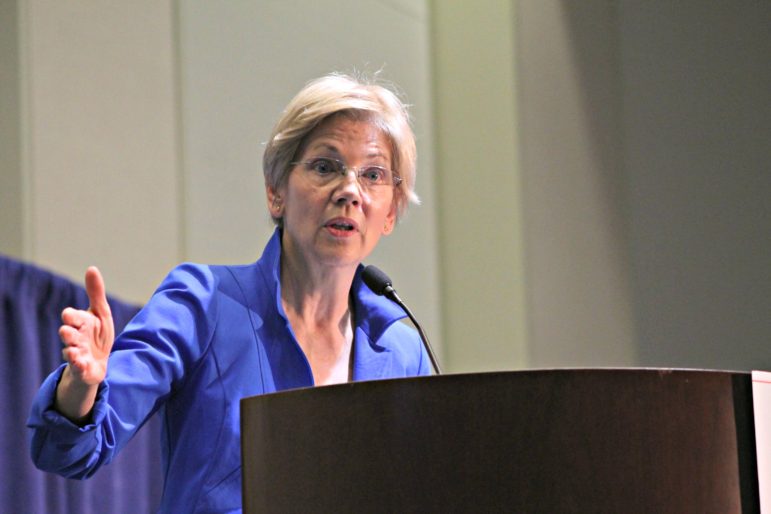 Warren won’t ‘roll over and play dead’ in upcoming campaign

U.S. Sen. Elizabeth Warren will run for a second six-year term next year, she announced by email Friday, Jan. 6, and she expects her 2018 campaign to be “uglier and nastier than anything we’ve ever imagined.”

Warren, a Harvard Law professor and consumer protection advocate who burst into the political mainstream with her 2012 victory over Republican Sen. Scott Brown, focused her re-election announcement on President-elect Donald Trump.

A darling of the progressive wing of the Democratic Party, Warren framed her announcement as a vow to fight Trump and his allies in Congress tooth and nail.

“Nobody expected 2017 to start this way. This isn’t the fight we were expecting to fight. But this is the fight that’s in front of us,” she wrote in an email to supporters. “And the people of Massachusetts didn’t send me to Washington to roll over and play dead while Donald Trump and his team of billionaires, bigots, and Wall Street bankers crush the working people of our Commonwealth and this country.”

No other candidates have formally announced their intention to challenge Warren in 2018, but former Red Sox ace pitcher Curt Schilling has publicly mulled a run, has called Warren a “nightmare” and said he hopes to be “one of the people responsible for getting Elizabeth Warren out of politics.”

Despite not having an opponent yet, Warren made a plea for donations ahead of what she expects will be “an even bigger, more expensive fight” than her race against Brown in 2012.

“The smears and right-wing attacks from Donald Trump, Mitch McConnell, the Koch Brothers and Wall Street aren’t about to get a little worse — they’re about to get A LOT worse,” she wrote.

She added, “The big banks and giant corporations aren’t lining up to give money for my re-election. In fact, a lot of them would rather see me pack my bags and go home.”

Among the issues Warren vowed to push for in the Senate were debt-free college, raising the minimum wage, expanding Social Security, investing in public schools, affordable health care and childcare, and defending Wall Street reform.