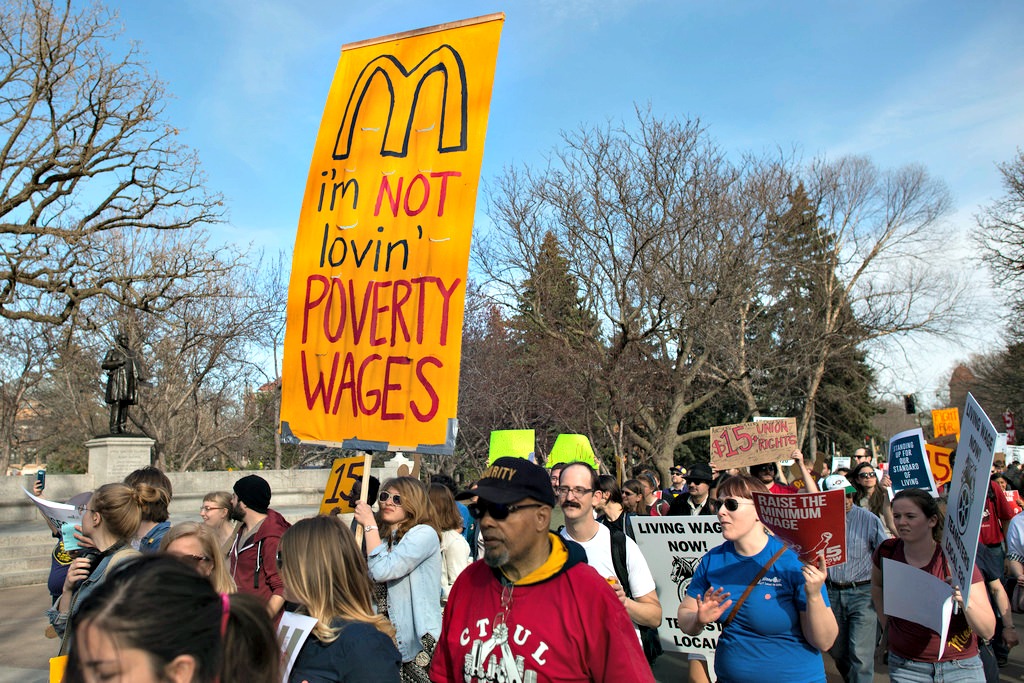 The Fight for $15 is a losing battle for everyone, says Chris Sinacola.

It remains true that millions of Americans who lack sufficient education and training find themselves stuck in minimum-wage jobs for years. But their American Nightmare cannot be ended by increasing pay to levels that exceed their productivity.

With the arrival of the new year, Massachusetts increased its minimum wage to $11 an hour. Liberals and the working poor are celebrating, claiming it will make a real difference for low-wage workers, and brings them closer to the fabled $15 per hour wage that is already law in some places, including Seattle and San Francisco.

Their celebrations would be much quieter if they understood the real effects that minimum-wage increases have on employment.

There are three such effects that must be examined: Immediate, long-term and psychological.

An enormous amount has been written about whether minimum-wage hikes increase, decrease or have no effect on employment. The effect, it turns out, is mostly a function of politics.

The latter, in my opinion, are correct.

Economist and columnist Thomas Sowell, who recently announced his retirement from media commentary, put the case eloquently in his 2007 book “Basic Economics: A Citizen’s Guide to the Economy,” which should be required reading for every politician, pundit and policymaker: “The unemployed are made idle by wage rates artificially set above the level of their productivity.”

It really is that simple. If your labor is worth, say, $8 or $10 per hour, but any employer must offer you $11, you are not likely to be hired. If hired, you are likely to soon be out of work again, since your employer will soon be bankrupt.

There is, in fact, no basis in our Constitution, or any place in a truly free market, for government to set any minimum wage at all. But polls show that even a majority of conservatives, who really should know better, favor some increase in the minimum wage. The arguments for such increases, although flawed, are very seductive.

As for persuading today’s liberals that minimum wage increases are harmful, that’s a fool’s errand. True believers in the very worst sense, they place party and policy above the common good. Their minds are open only to such information as confirms their beliefs.

Those of you who are open to argument may consider this article from the Wall Street Journal. The rest of you can continue to witness and try to explain away generations of poverty, misery and unemployment — particularly among minorities — without ever considering that it is liberal economic policies that keep the poor shackled to the welfare state.

And rest assured: The true believers will never stop calling for increases in the minimum wage.

Not a week has passed in the last 50 years without someone, somewhere in America, calling for an increase in the minimum wage. Such cries won’t end the day every burger-flipper and Walmart greeter is finally getting a Hamilton and a Lincoln every 60 minutes.

The basic reason, as liberals are fond of pointing out, is that you cannot live on $15 an hour in America, never mind raise a family. What liberals rarely add is that no one is meant to, and minimum-wage workers are mostly young, entry-level workers who soon move up the ladder.

It remains true that millions of Americans who lack sufficient education and training find themselves stuck in minimum-wage jobs for years. But their American Nightmare cannot be ended by increasing pay to levels that exceed their productivity. Such policies retard job growth, increase business costs, and add to the millions of working-age, able-bodied Americans who could be in the labor force, but are not.

But such wage increases may do worse by psychologically disabling the workers they are meant to help.

Encouraging minimally skilled workers to think that life will improve if they hang on for another dollar or two per hour is misleading and cruel. Such workers really need more skills and training so they can quit their entry-level jobs for better ones.

“Labor is not exempt from the basic economic principle that artificially high prices cause surpluses,” Sowell writes. “In the case of surplus human beings, that can be a special tragedy when they are already from low-income, unskilled, or minority backgrounds and urgently need to get on the job ladder if they are ever to move up the ladder by acquiring experience and skills.”

If you really want to help the poor, forget minimum wages. Help them get the education and training they need to claim their own piece of the American Dream.