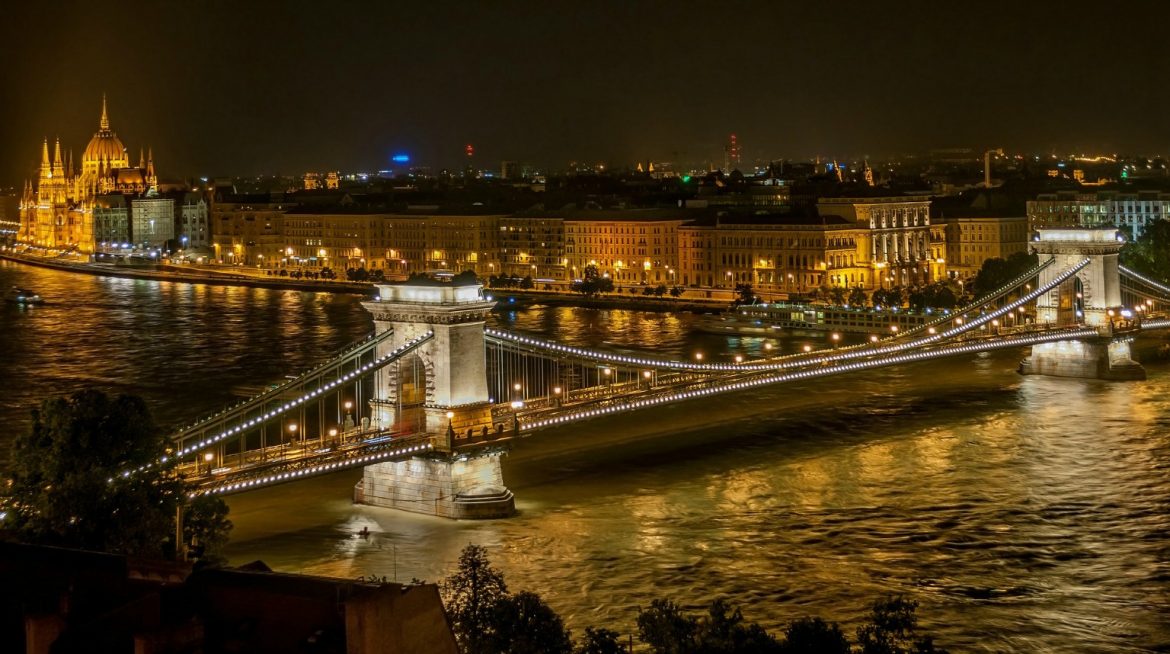 While socialists and would-be socialists in Worcester and elsewhere were marching out of their left-wing universities on Inauguration Day to resist a supposedly right-wing president, my wife and I were exploring the capital of Hungary, where anyone over 30 can tell you how socialism works in the real world.

Budapest is a city of beauty and bitterness, remembrance and forgetfulness.

Seven bridges link hilly Buda on the Danube River’s western shore with Pest on the eastern floodplain. Ice floes drift past the Parliament, or Országház, a Gothic masterpiece that has witnessed Hapsburg hegemony, the Soviet heel and 1989’s joyous birth of the Third Republic. 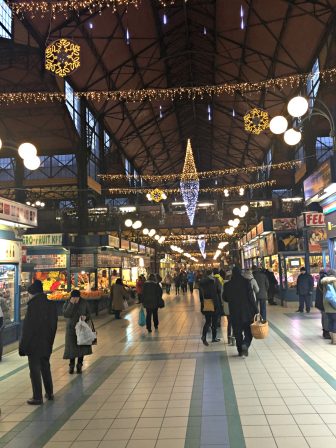 It was not always so.

As we enjoyed the city, I kept thinking of the late Robert Nemeth, who fled following the Soviet Union’s 1956 invasion to crush the rebellion. Bob and his family settled in the United States, where he mastered English and rose to become the Telegram & Gazette’s chief editorial writer.

Bob wrote often about his native Hungary. The beauty of Lake Balaton. The grandeur of Budapest. The perilous war years, particularly 1943-44, when his father faced possible arrest and his mother, a Jew, potential deportation or worse.

Bob wrote with equal passion and clarity about recent Hungarian history, the rise of the nationalist and conservative Fidesz party and its leader, Prime Minister Viktor Orban.

“Orban & Co. resorted to authoritarian rule and wholesale brainwashing,” Bob wrote in 2010. “It is a recipe for failure that Hungary can hardly afford.”

Years after he “retired” — Bob continued to write insightful columns until shortly before his death in January 2014 — I was appointed to the editorial post he had filled so well. I was under no obligation to consult him, yet always gave great weight to his views, and very often agreed with them. I believe he had adopted much the same attitude to those who preceded him.

But the conservatism Bob and I shared was not exactly political. Rather, it was a recognition that shaping the best future requires understanding the past.

It requires knowing that Budapest’s broad Andrassy Avenue — whose stately edifices house embassies, haute couture and the Hungarian State Opera House — in 1956 accommodated dozens of Soviet tanks. Accepting that the same folks selling savory pastries to tourists may hold decidedly unsavory views on minorities and refugees. And coming to terms with a city that gave birth to both Theodor Herzl, founder of Zionism, and the fascist, anti-Semitic Arrow Cross Party.

Bob knew all this, and wrote fearlessly, critically and lovingly of his native land. He returned several times to meet family and acquaintances and reflect upon Hungary’s contradictions.

What, for example, might he have said about the juxtaposition of a memorial to the Red Army soldiers who liberated Budapest from the Nazis, and a bronze statue of Ronald Reagan, who helped liberate Hungary from the Red Army? Would he have recognized any of the older faces we saw? 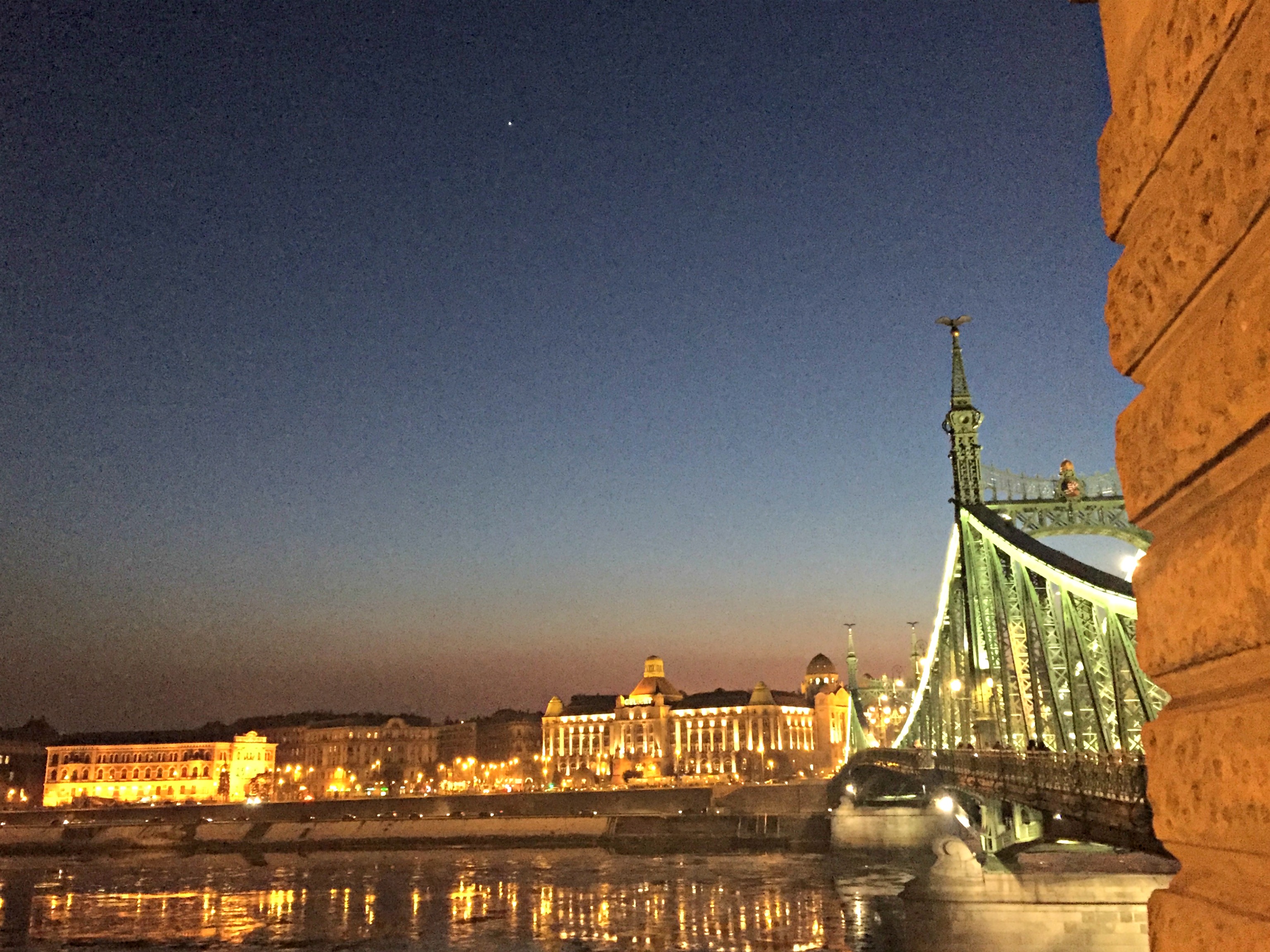 Budapest at night, from the banks of the Danube. 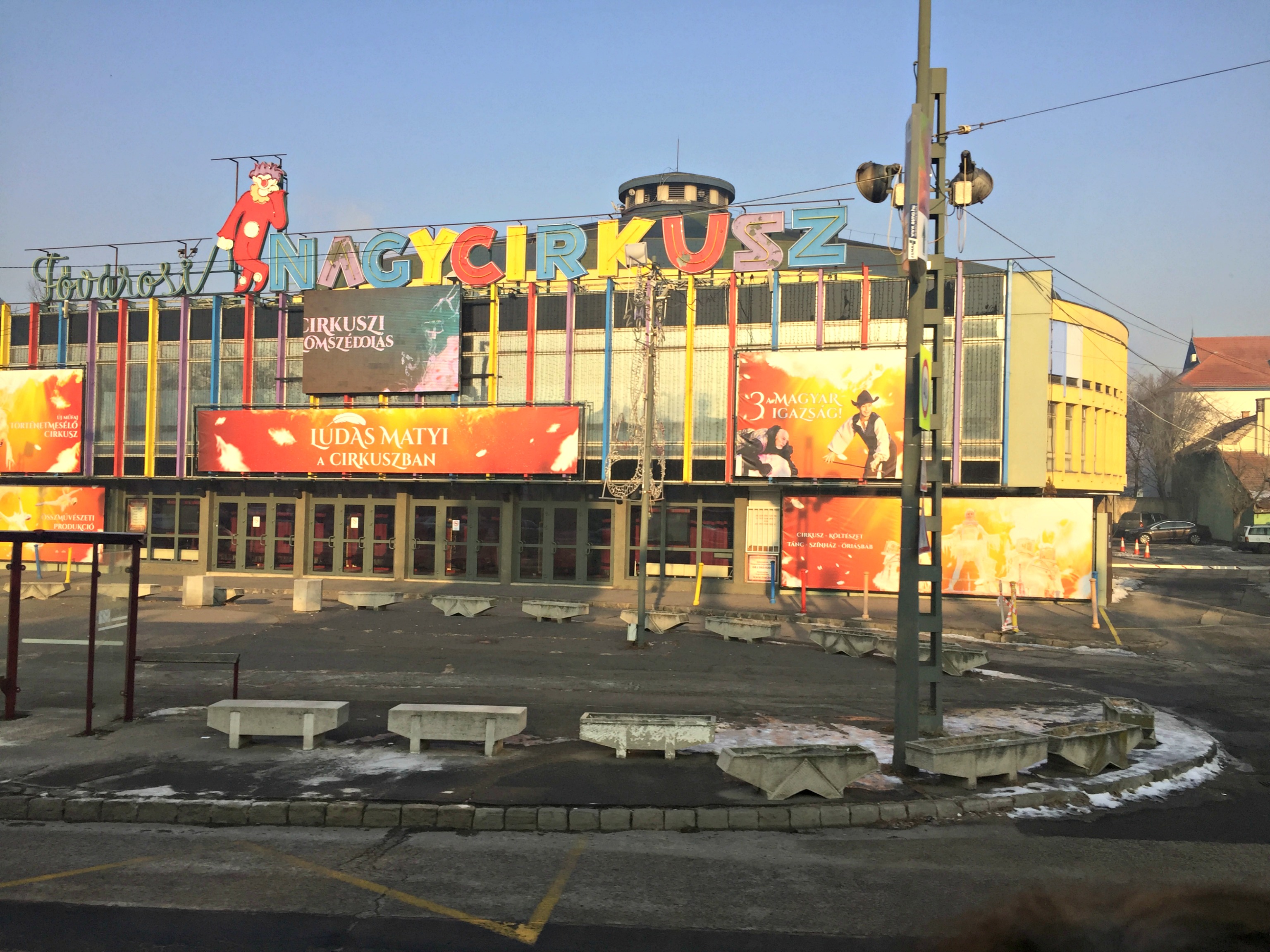 The Capital Circus of Budapest near the city's Városliget Park. "This building, which opened in 1971, has so much Soviet-era charm it's actually pretty." 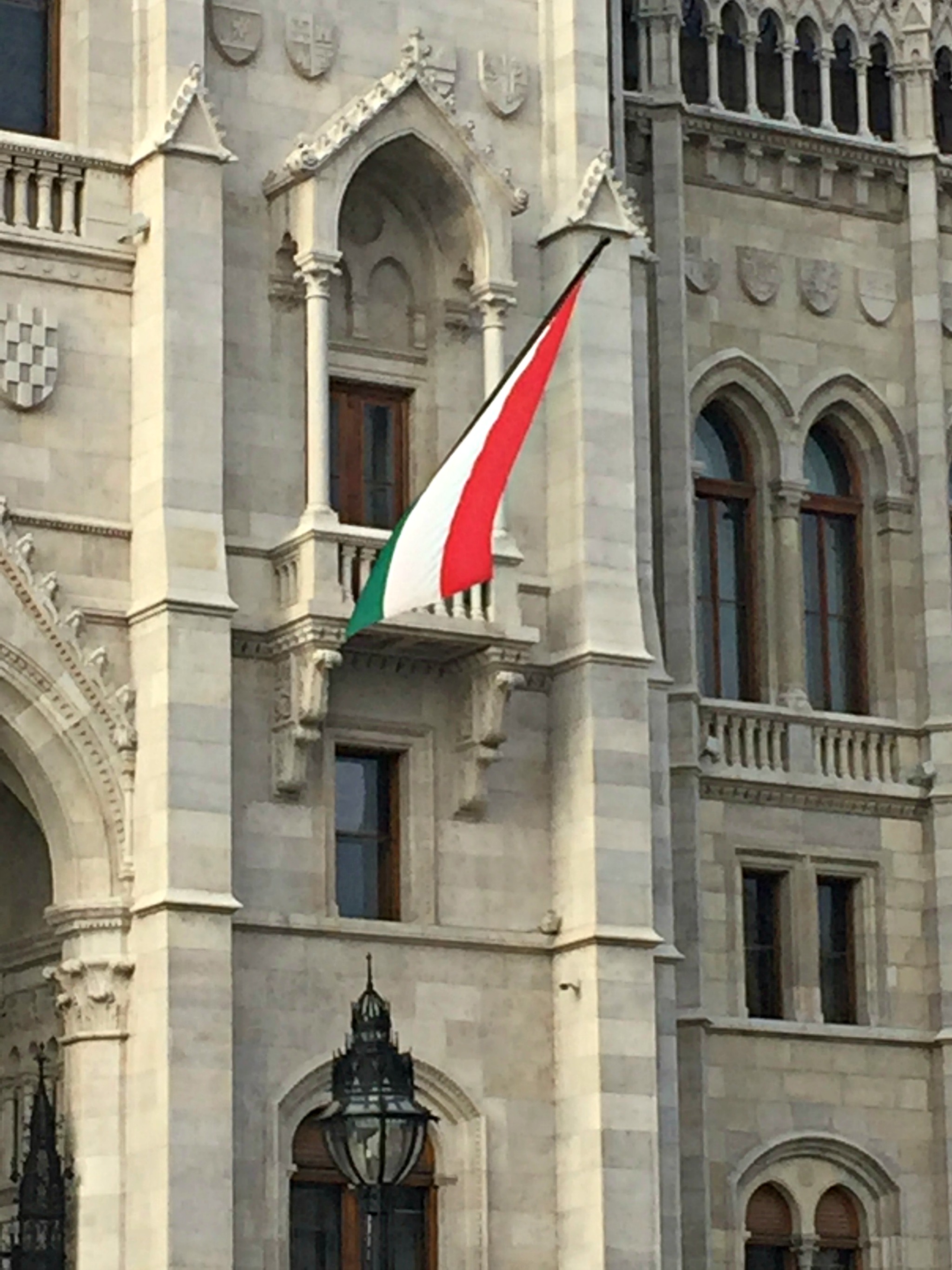 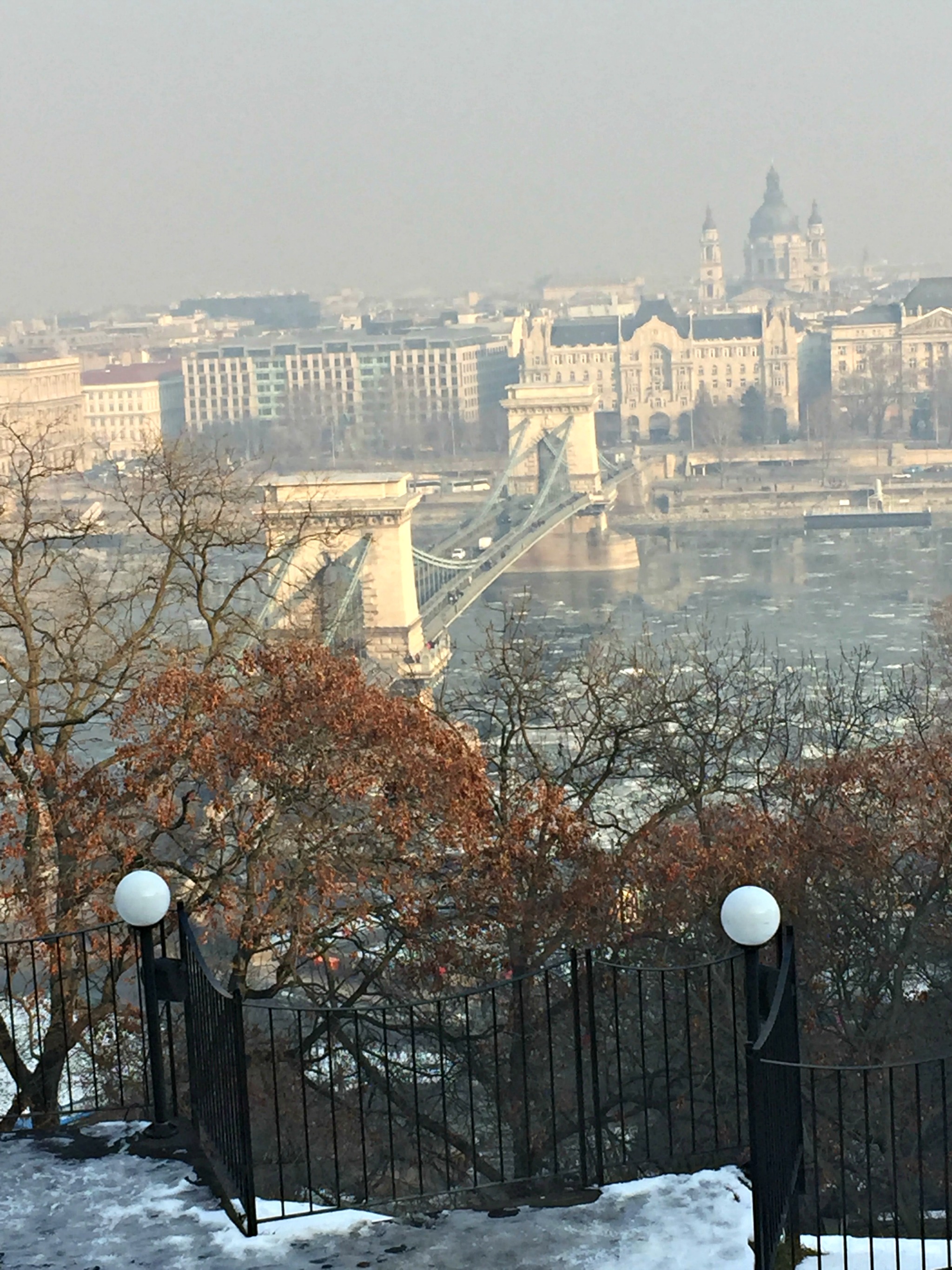 Pest from the heights of Buda, Chain Bridge across the Danube. 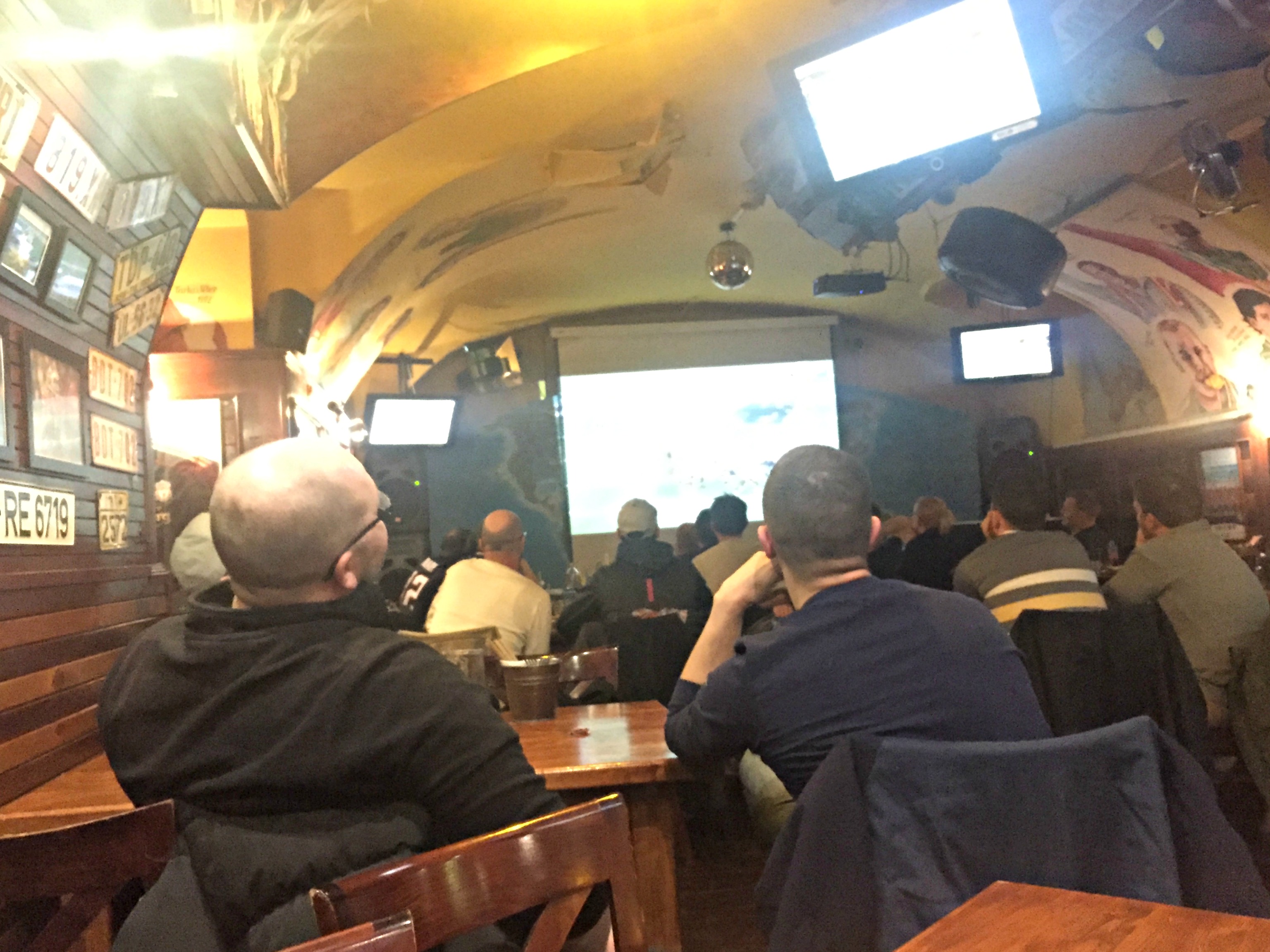 It's Tom Brady's world! At the Champs sports bar on Dohány Street, the Budapest Patriots Booster Club cheers them to victory over Pittsburgh in the AFC Championship.

Bob may be gone, but he was with me in spirit in Budapest. For he championed that truest free press, an independent mind. He would have encouraged us to explore, learn and decide for ourselves.

So we splashed in the Széchenyi mineral baths, enjoyed works by Berény, Szőnyi and others at the National Gallery, and stayed up with dozens of Hungarian Patriots fans to watch Tom Brady capture another AFC title. [Editor’s note: An occasion Mr. Nemeth would’ve likely skipped, Budapest or not.]

We returned home to a stack of newspapers, and began to sift through our new president’s childish tweets, his opponents’ childish accusations, and the Fourth Estate’s childish coverage of both.

I hope all that passes, and that capitalism and humanism once more push extremism aside in favor of liberty. Will they?

“When Hungary gained independence after the fall of the Soviet Union in 1989,” Bob Nemeth wrote in 2012, “I predicted it would take the country perhaps 15 or 20 years to achieve full democracy. If someone asked me today, I would shy away from making any prediction.”

Perhaps I am more hopeful, or just more naïve, but the Hungarians I met are not about to surrender their freedoms to anyone. Nor are Americans, despite the sincere — and misguided — advice of the socialists among us, who should head back to class to learn some more Hungarian history.