It was the end of year and there was midnight Mass on Dec. 31. The Mass, meant to usher the congregation into the new year, was exciting and full of joy.

The fraternity was cordial as we all hugged and shook hands. It was not difficult to smile and exchange pleasantries. We were soon to start the reality of American living, and our thoughts would quickly wander past the new year.

I was not too happy when I realized the enormous task ahead of me.

I only had a seasonal job, and my wife expected more from me, at least a better job.

And we received word that our family homes in Africa had all been burnt down, about four houses. My grandmother’s house was my entire responsibility. That is where I grew up. My two uncles survived and had nowhere to live, though they managed.

They may have been told that I had survived President Jammeh’s countless challenges and was now in the United States. Our first three months were challenging.

Augustine’s last chapter: First Noel in Worcester Or scroll down to catch up from earlier in the remarkable tale

My first job at FedEx would be ending that January. My wife, Theresa, was quick to quote me that “I cannot do such a job, because I am a journalist.” But she was more concerned that I do something fast to move on and get another job.

I had applied to Target at a job fair. I did not know even what type of job to try for. I am not good with cash and counting; could I have been a cashier? I tried it anyway, but I had no experience and was not called for an interview. It was in Marlborough. Theresa and our daughter Alice were called back, though, and they were hired.

The distance was too much for them, especially when my old Dodge Neon would break down on the way. Once, we were stranded on Boston Post Road. We had no way out, until I called a mechanic friend who managed to repair the car. Work was not fun, and neither Theresa nor Alice were long for their jobs. 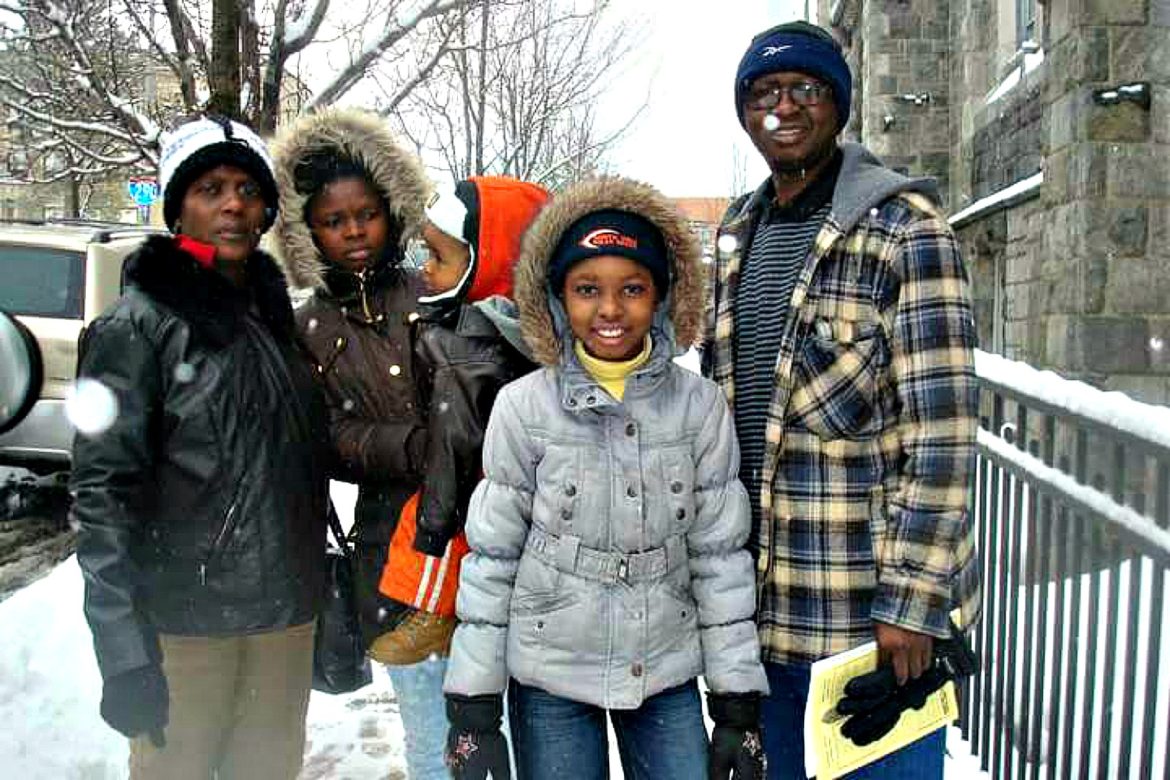 Theresa and Alice, left, found work at Target — but nor for long.

I stayed home thinking, what next?

I could not comprehend why I was still lacking a good job to help my family. Meanwhile I kept receiving messages for help from Sierra Leone and The Gambia. They had no clue as to what was going on here. The notion we all had there was that the United States had a lot of money for everyone. Friends would tell us before we left, “Don’t forget to be sending me dollars.”

The pressure was equal at home: “You can go to school, [then] when you are done I will go, [and] by so doing we would be able to care for our children well,” Theresa would say. She was right, in a sense, but was it an excuse for her not wanting to go to school? Only time would prove this.

I got a job at the Quabaug Vibram Innovation shoe factory in North Brookfield, where Theresa was also called for an interview. She got the job, too.

On our way back to Worcester one morning, I was not aware of some roadwork on a hill that I approached with speed. There was a policeman controlling the traffic and I was stopped as I approached them. I was ordered to wait as other drivers were let go.

After everyone left the officer came toward us. We looked at each other and Theresa asked me what I would say since I had no driver’s license; I drove on only my permit.

I started to recite the “Hail Mary, full of grace, the Lord is with thee … ” before he approached us.

“Hi,” I replied with my heart in my mouth. That was my first time being pulled over by police in America. He was stern but quite straightforward.

“Did you see the work going on here?”

“No, sir,” I answered in the gentlest voice, but trembling within, without letting my wife or the policeman know.

“Did you not see the trooper over there?”

I said, no, that there was no sign of it because I concentrated straight ahead which helped me to see them in time.

“What is your name?” he asked. “Augustine Kanjia,” I said.

“Where do live and where are you coming from?”

“We live in Worcester, and we are coming from Quabaug shoe factory. And we are just new in America.” He was fascinated by my openness.

“OK, this is a verbal warning. Do not repeat it any more.”

“Yes, sir!” He ordered us to go and be very careful. Thank you! We went gently, thanking him again and again. Theresa was near collapse for fear of the police asking me for my license.

The success we had in getting a job was a morale booster, and we made plans as to how we would spend the new money. Meanwhile, our food stamps were reduced, which put the strain right back on our salary. I wondered if the government would want us to remain idle, and maybe they would add to our food stamp allotment.

But we were resilient and diligent at work. We worked assiduously to keep our house going. 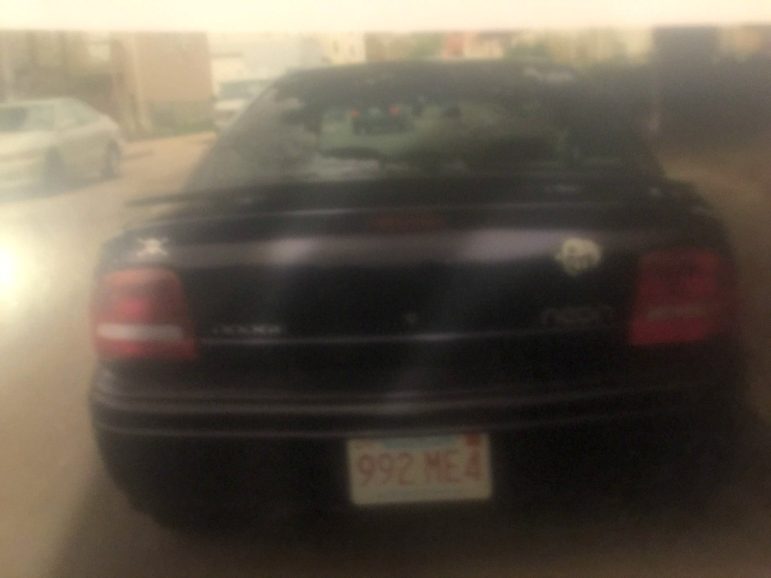 The journey to work was demanding. We left by 6 p.m. and started at work at 7 — until 7 in the morning. The rubber smell was excruciating, but it was too early to start complaining. Theresa was not asthmatic but it showed on her when the smell was too much.

I did not have breathing problems, either, but I suffered from pain in my broken leg. Standing too much on my leg was a problem, but they could not feel my pain and neither, I thought, would they believe what I was going through. I prayed the Rosary each time I started work with machines.

I became a target for some Ghanaians we met there because they knew we were from Sierra Leone and they were not very pleased. Some were very friendly, but others would tell the supervisor that I was quite lazy at work.

I had just started to trim the soles and they expected me to be an expert. Theresa was reported, and they started a rumor that she was pregnant, because she coughed and vomited as she was bothered by the smell. I was confused altogether as to what to do next.

The main supervisor, Jeff, was my ally and did not believe what was said about me. He was patient until I became an expert in trimming the soles. I trimmed more than 1,000 a night. There was no way they would attack me for being lazy anymore. The situation was normalized.

Theresa pulled out of the job before I did. She was getting sick from the smell. She was without a job for some time, while I worked. I was lucky I brought the money home (and our food stamps allocation rose again).

I did not drive to the workplace anymore. One conversation with police was enough.

I carpooled with Danny Roberts, whom we called Oga. Eventually, I left him for Felix Osafo, another gentleman, who would pick me up for each shift. We became friends, though I did pay for the rides. My knee started swelling due to the pressure. I quickly made it known to my boss that I had a fracture which was swelling up due to the standing hours on end.

It was Sierra Leone’s Independence Day, April 27. Many people gathered at City Hall in Lowell, where they have many Sierra Leoneans. We had become a part of the Sierra Leone organization there. I was elected the secretary, making it mandatory to be plying the route to Lowell whenever we had meetings.

I was made the master of ceremony during the independence celebration. I had my recorder and reporter’s notebook to jot down salient points for possible publication. I searched for a publisher for my work, but got none.

David A. Jordan, president and CEO of Seven Hills Foundation, was the guest speaker, and that made perfect news for me.

I eventually thought of my friend Pa Nderry Mbai, editor of the online Freedom Newspaper in The Gambia. He would publish my article, I thought. He loved it, and indeed he did publish it. I sent the link to Dr. Jordan, who was very excited. He wrote to me to see him.

I went with Theresa to his office. He asked if I had a driver’s license.

No, I said. He replied that we should get our licenses — and that once we did, he would give me a job. He thanked me for my article, saying it was well articulated and to the point.

This was in 2012. My work was excruciating at the shoe factory, so I fought hard to pass my driving test. I got fed up when I failed twice for simple mistakes. My family depended on me to pass the test, but I couldn’t. My heart trembled at the exam, making it difficult for me. To think, I had a license and drove all over in Africa.

The line was longer than expected at the Central Mass. Safety Council on West Boylston Street. I tried to be patient. I prayed this time. It was my turn to go.

The first task was to do parallel parking. I did it with ease. I knew this was my big problem so I had worked at it well. I then drove gently, following all rules carefully. At the end, I was congratulated. I rejoiced in my heart and ran home with my friend who had brought me there.

The license changed my world.

I felt like I belonged, with my new identity. My wife was not told right away. I waited for a week until we received the license in the mail. I made it a surprise. Our progress had only begun.