Expanded train service between Worcester and Boston has long been considered a key component of economic development efforts in this city.

From the reintroduction of service in 1994, the history of the commuter rail has been marked by expanded offerings and faster service. This is notwithstanding problems with reliability and on-time performance.

Those problems recently resurfaced at public forums to solicit feedback for proposed schedule changes that will take effect in May.

Feedback from meetings in Natick and Worcester included discussion around the timing of trips to and from Boston, and the proposed inclusion of stops in the evening Heart to Hub express service.

Ryan Coholan, chief railroad officer for the MBTA, told a group at Union Station, “You deserve a functional, reliable and resilient schedule. It’s not an easy task,” according to the Telegram & Gazette.

Indeed, it has not been.

In an interview with State House News Service in December, David Scorey, general manager of Keolis Commuter Services, said the schedule introduced in May, which included the nonstop Heart to Hub service and sped up peak travel time from Worcester to Boston by 13.4 percent, “stretches” the equipment and was “less forgiving” than the prior schedule.

Data from the MBTA’s own Reliability Dashboard backs that up. The dashboard considers on-time arrivals to be within five minutes of the scheduled arrival time. 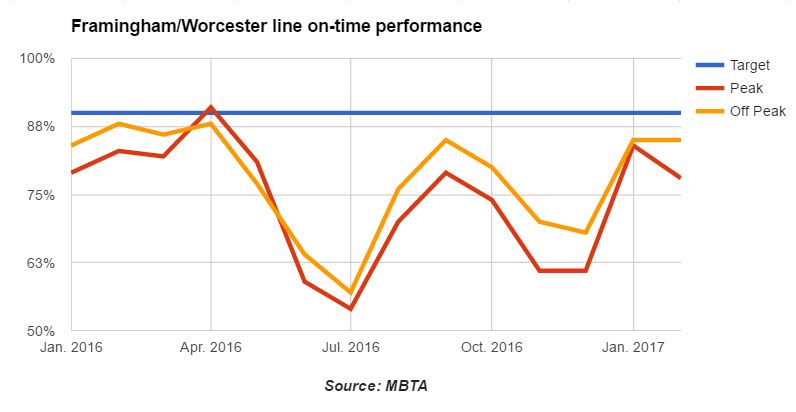 A review of the previous 30-day performance on the first of each month from January 2016 to February 2017, shows that prior to the schedule change in May, the Worcester line operated on time in peak hours between 79 percent and 91 percent of the time.

In the seven months after the schedule change on-time performance dipped to as low as 54 percent and did not top 80 percent. Frustration with the service reached its apex when a group of commuters petitioned Gov. Charlie Baker to eliminate the nonstop Heart to Hub.

Since the fall, two groups, the Worcester Line Working Group and the Worcester Line Rapid Action Group, have been formed to study the problems and propose solutions, including the planned schedule changes slated to be introduced in May.

Short-term solutions proposed by the Rapid Action Group, such as extra staff and deploying the right equipment (which Scorey describes in a December video below) seem to be helping.

Thirty-day performance numbers for Jan. 1 and Feb. 1, which show 84 percent and 78 percent on-time performance, are the line’s best since the schedule changes last May. Overall on-time performance of 85 percent for the past two months is also the highest in back-to-back months since March and April.

The schedule proposed for this May includes minor changes to the inbound peak trains, a maximum of four minutes added to three of the trains.

In the end, it may prove to be the case that the schedule introduced last May was too ambitious considering changes to infrastructure and improvements being made to the Worcester line at the time.

We applaud the recent efforts by the MBTA and Keolis to increase on-time performance while retaining the Heart to Hub services. Further, we applaud the continued long-term investment in the line.

Speedy, reliable service to and from Worcester is and will continue to be important to the city’s economic well-being.