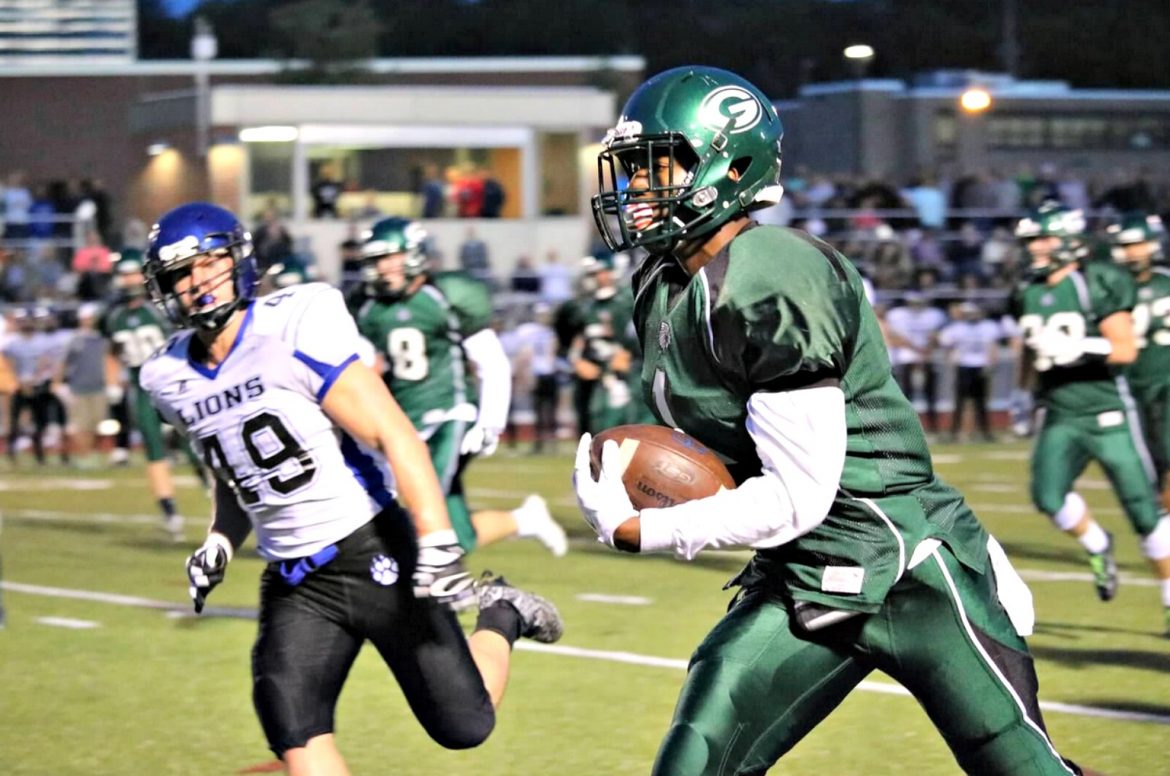 Iffy Melifonwu and Cole McCubrey were imposing presences on the high school gridiron. And now they're both headed to the next level.

All across the country last Wednesday, National Signing Day, media members packed into high school gymnasiums, libraries and cafeterias to catch a glimpse of the nation’s most highly touted college football prospects making their commitments official.

It has become a day of de-commitments — with players pretending to put on one school’s hat before wearing another to signify their choice, and all other sorts of unnecessary drama.

Here in central Worcester County, we had a pair of Division I football commits, and neither of them provided much drama, though they certainly could have.

Grafton’s Ifeatu Melifonwu, a star running back and defensive back who rushed for nearly 1,900 yards and led the Indians to the Division 3 state championship game at Gillette Stadium in December, became a wanted man toward the end of the recruiting process.

Though Melifonwu has been verbally committed to Syracuse since last summer, Michigan coach Jim Harbaugh showed up at one of his basketball games to try to lure the 6-foot-3 athlete to Ann Arbor.

While he still remained committed to Syracuse, Melifonwu couldn’t help but agree to a campus visit at Michigan a week before Signing Day.

“(The Michigan trip) did change my thinking a little bit,” Melifonwu admitted. “I wanted to see more of my options, because nothing is set in stone until you sign, like I did (Wednesday). … I just thought it would be good to check it out and see how I liked it.” 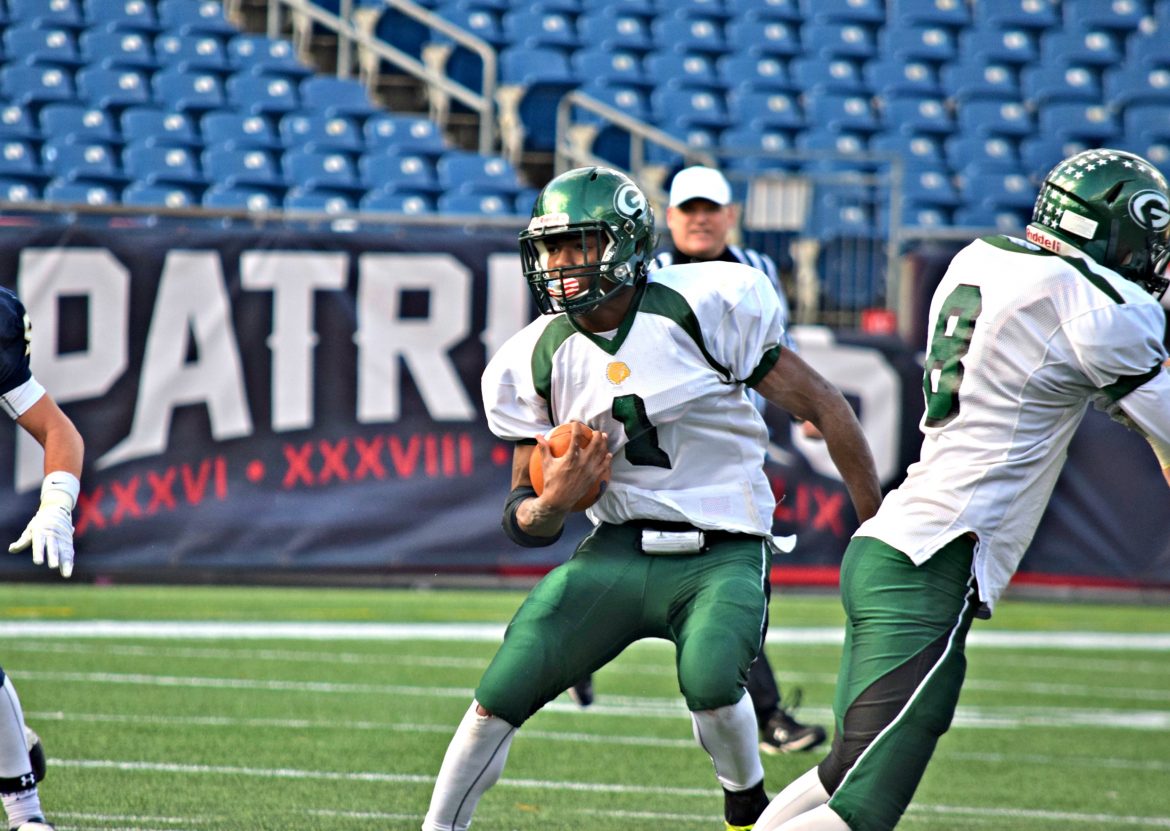 Melifonwu led the Indians to state title matchup this past season at Gillette Stadium.

Then, while he was at the airport, set to leave Michigan for a last-minute visit to Syracuse, the Wolverines formally extended a scholarship offer to Melifonwu.

It was a lot to think about.

One of the country’s most well-known coaches had offered him the chance to play at one of college football’s most prestigious programs. Still, his final visit to Syracuse reassured him that he wanted to join the Orange. After meeting with defensive coordinator Brian Ward, among others, Melifonwu decided to honor his commitment.

“That last trip to Syracuse kind of sealed the deal for me, and I knew where I was going,” Melifonwu said. “I definitely formed a strong relationship with the Syracuse coaches.”

And Wednesday we didn’t even get a hint of drama. 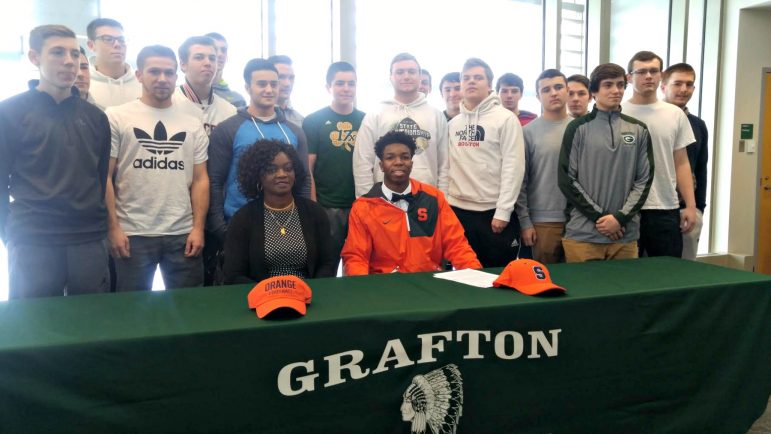 Melifonwu, with his mom, teammates and friends after signing his national letter of intent to play football at Syracuse University.

Rather than bringing a hat from each school, or at least trying to make students, fans, teachers and media guess where he was headed, Melifonwu showed up wearing a Syracuse jacket with a pair of Orange hats in hand. Grafton football coach Chris McMahon even wore an orange tie for the occasion, as his top player prepared to join one of the Atlantic Coast Conference’s up-and-coming programs under second-year coach Dino Babers.

“The emotions are just tremendous right now,” McMahon said. “I feel great for Ifeatu and his future. It’s really the culmination of four great years here at Grafton High School. 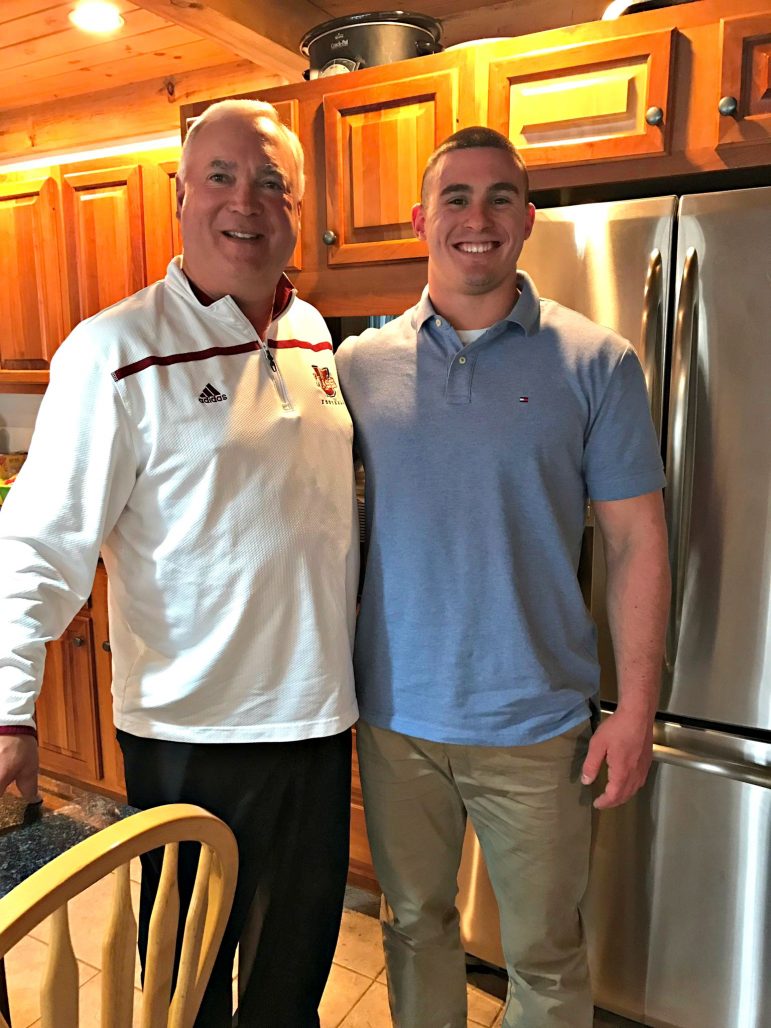 Tahanto‘s Cole McCubrey had an equally drama-free ceremony to honor his commitment to play football at UMass-Amherst, but that doesn’t mean it wasn’t special.

The star of the West Boylston/Tahanto co-op football team, McCubrey was given an unexpected gift by some New England winter weather. As snow blew across Central Massachusetts Tuesday night, sporting events were canceled and postponed throughout the region, including Tahanto’s home boys’ basketball game against West Boylston.

The game was moved to Wednesday night, meaning that McCubrey could make his commitment official in front of fans from both schools he represented on the gridiron the past four years.

Just before the game started, McCubrey and his family took their positions at the scorer’s table, then Cole threw on a UMass hat to cheers from both sides of the gym.

Cole McCubrey (@Colemcccubrey34) throws on the UMass cap & gets a cheer from the crowd at the Tahanto-West Boylston bball game. pic.twitter.com/yAnsPvwBCK

“It was awesome to have all the guys come out,” McCubrey said of his teammates joining him at the basketball game. “(My teammates) are a big part of it too. Competing and everything during practice, it all comes together. I guess this is the next step, which is awesome.”

Known as a running back, mostly because he is the region’s all-time leading rusher with 6,352 career yards, UMass actually recruited McCubrey to play linebacker. Already at his target weight of 225 pounds, McCubrey has the look of a D1 defender, and his coach Mike Ross thinks he’s ready to be a standout for the Minutemen. 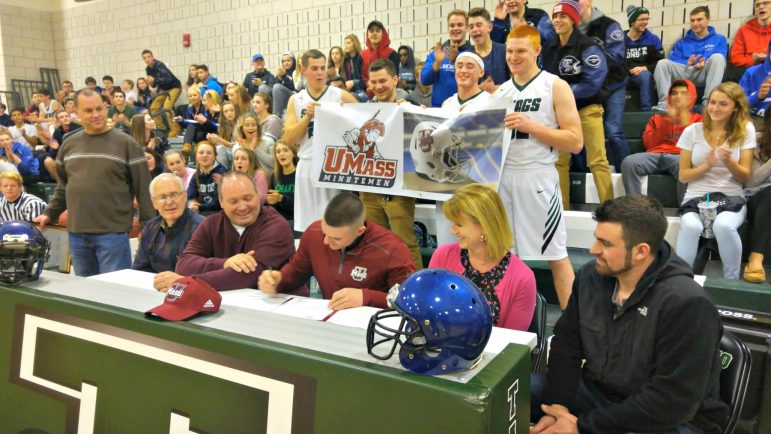 Flanked by his parents and coach, McCubrey signs to play for the Minutemen.

“He’s probably better on defense,” Ross said with a smile. “He’s so good at running, so people see that, but he’s a great defensive player. He’s gonna be great up there.”

Ross would know a thing or two about small-school talent.

When Ross coached Grafton several years ago, he coached Obi Melifonwu, Ifeatu’s older brother, who is now considered a likely NFL Draft pick after a stellar career at University of Connecticut. While Obi was a dominant player at the high school level, Ross praised McCubrey as the best high school player he’s ever coached, and joked that McCubrey could walk on a college football field right now and be fine.

“He looks like he’s ready to play over there,” Ross joked of McCubrey talking to a group of his friends. “Seriously, look at that kid. Just put a helmet on him and get out of the way.”

Earning a Division 1 scholarship was a longtime goal for McCubrey, who will join UMass as one of four in-state prospects entering the program this year. Alongside Worcester Academy’s Brian Abosi, who also starred at St. John’s High School in Shrewsbury, and Jake Byczko, a Lawrence Academy star who previously played at Auburn High School, McCubrey will also bring a little Central Mass flavor to Amherst. 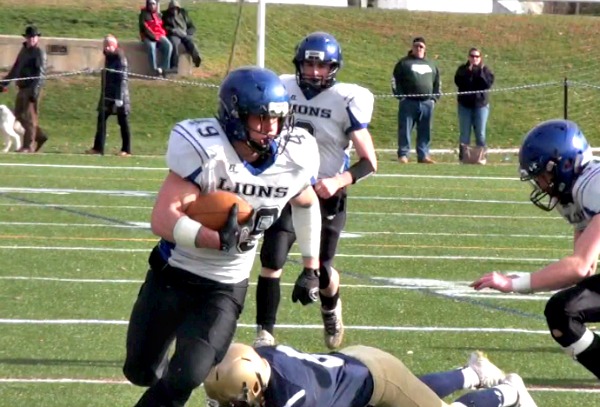 “First of all, it means the world to be able to play for my home state’s football team,” McCubrey said. “Along with the football program, the school is great. I’ll be studying finance at the Isenberg School, so I’m excited for that, and really the people (all around UMass) sold me on it.

“One hundred percent, (getting a Division I scholarship) has been the goal since playing youth football in first grade,” McCubrey continued. “It was like, ‘I wanna go Division I, I wanna play big-time football,’ and now I’m gonna have the opportunity to do that.”

While McCubrey isn’t quite sure what the future holds, Melifonwu is pretty sure he will be redshirting next season to pack on some extra weight and strength. Both of them, however, were told by coaches at their new schools that they may get the chance to play both sides of the ball.

“I doubt it,” McCubrey said with a laugh. “But you never know.”

But Melifonwu was a bit more optimistic.

“Another thing was (the Syracuse coaches) said I might be able to play running back,” Melifonwu said. “So don’t be surprised to see me back there.” 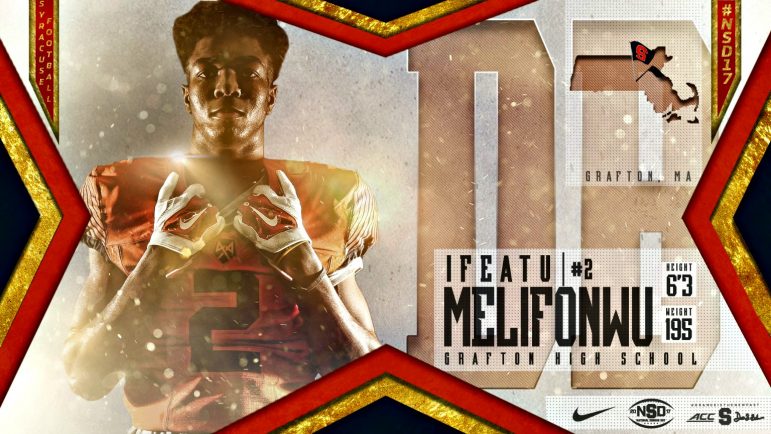 But, as it stands, McCubrey enters UMass as a physical outside linebacker with a clear path to the field. He’s already begun UMass’ offseason lifting program before even arriving on campus, and he’s eagerly awaiting his playbook in the mail.

Melifonwu, meanwhile, projects as a long cornerback who can jam receivers in Syracuse’s Cover-2 defense. The Orange also think he could develop into a play-making safety, like his brother Obi at UConn, but they’re leaving the door open for him to play a variety of positions.

Either way, the pair joins Shepherd Hill’s Alec Lindstrom, already enrolled at Boston College, and Leominster’s Noah Gray, who signed with Duke last Wednesday, as one of the most decorated football recruiting classes in the history of Worcester County.

With the hoopla of signing day behind them, now the real work begins.