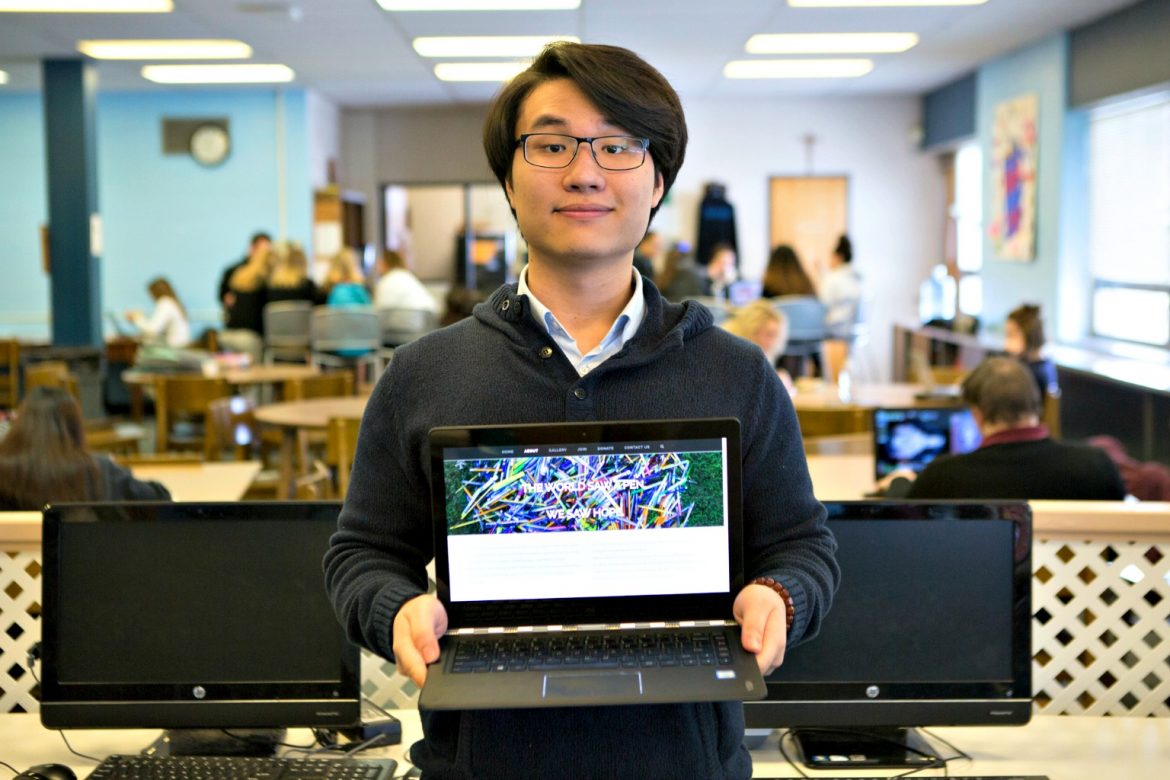 “It is so hard to do something nice when you are a teenager. You do not have money you can send to nonprofits, you do not have power to support the underprivileged. But Pen in a Box is an opportunity for us to stand up for those who need our support.”

For many, it can be seen as the end of a fulfilling journey. For others, it’s simply a necessary chore to put the past year in the rearview and move on.

No matter how high school students feel about the annual task of cleaning out their lockers, the undertaking is usually the first sign of a fresh start to come.

What’s left behind — notebooks, pens and pencils, binders, rulers, etc. — is usually thrown away and forgotten about.

But where most of his fellow students saw trash, David Byun saw a chance to help students in countries where kids are less lucky. His simple idea turned into a nonprofit that has branched out to more than two dozen schools around the world.

Byun, a senior at Holy Name Central Catholic High School, began thinking about all the school supplies being discarded.

“When I came [to America], I really noticed there was an apparent waste of school supplies in high schools in the United States. Just walking through the hallways you can see pens and pencils laying here and there on the ground,” Byun said.

Byun, an international student on a visa from Kazakhstan where his parents work as missionaries, was surprised by the volume of school supplies being tossed away when he witnessed his first locker cleanout at the end of his freshman year.

“During locker cleanout, especially, people throw nearly everything out of their lockers including pens, pencils, notebooks, loose-leaf paper and everything that can be used again next year,” Byun said. “I asked people, ‘Why would you throw this out?’ and most people said they want to have a fresh start to the next year with a fresh feeling. 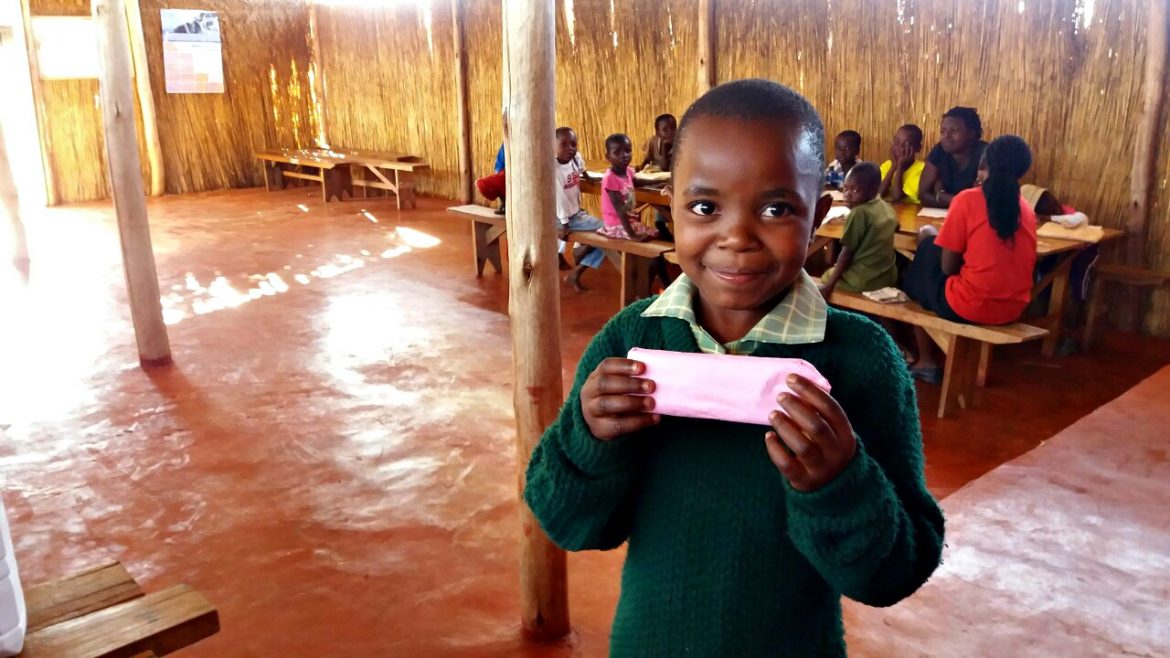 With that in mind, and following in the charitable footsteps of his parents, Byun asked, “If we have so many, and they have so little, why not give?”

At the start of his sophomore year, Byun drafted a proposal for a club at Holy Name. When June rolled around students responded, and the first collection allowed Byun’s project to send supplies to three countries: Kyrgyzstan, Kazakhstan and Nigeria.

“We did so by piggybacking the school supplies with missionaries going to those places. It basically cost us zero dollars,” Byun said.

From that single drive, Byun created Pen in a Box, a nonprofit that in just over two years has spread to schools around the globe, with more than 235 members in 29 different schools and supplies being delivered to 15 different countries.

“Our philosophy is that we help as much as possible and do as much as we can do,” Byun said.

“You don’t need money to help others,” Byun said. “All you need is the school supplies that you throw away so easily. There’s so much of it, so why not give? We are trying to make helping others accessible to students.”

Scott Anderson, director of admission at Holy Name, said, “This concept is wonderful. David started a club as a sophomore in high school, being empowered to do so, and he truly is making a difference in the world.” 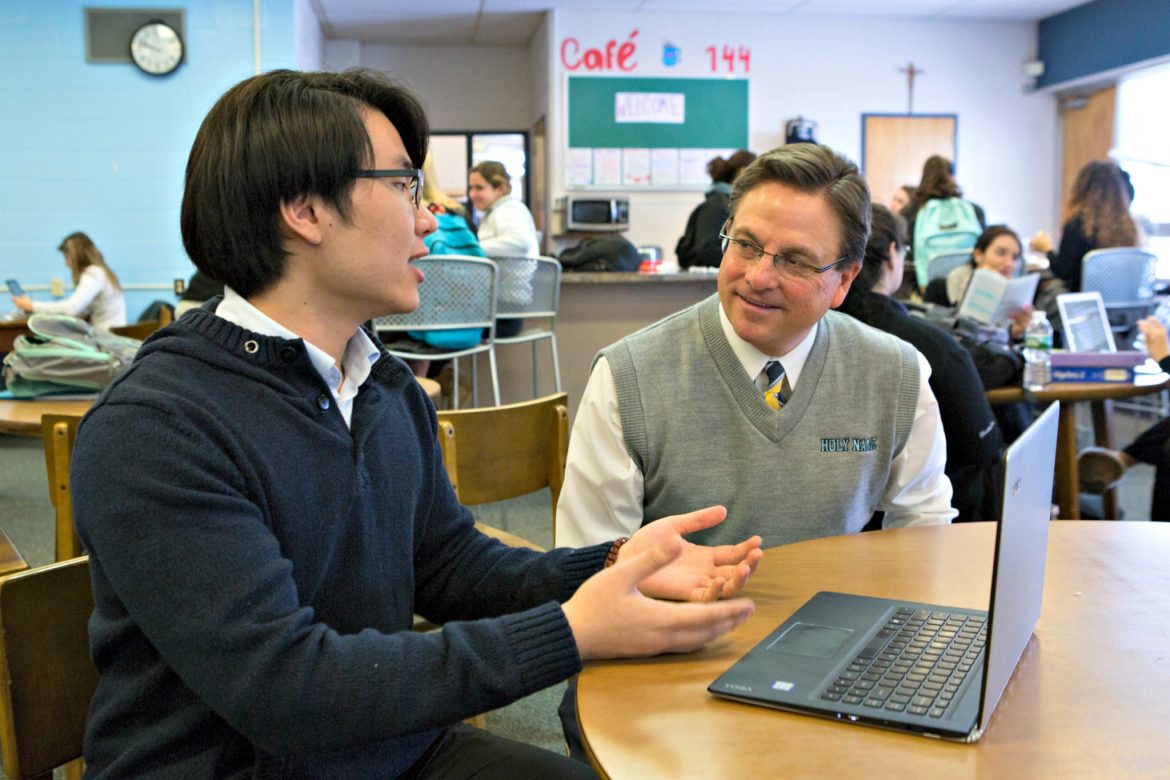 “The maturity around charity without the concept of money is impressive,” Anderson added.

Byun said he was influenced by the research of Dean Karlan, an economics professor at Yale University.

Byun points to Karlan’s evaluation of the cost of education in Uganda for Innovations for Poverty Action — a nonprofit focused on global poverty problems — as an inspiration for his own efforts.

In an email to the Sun, when asked how programs like Pen in a Box can help relieve the financial burdens of students in need, Karlan wrote, “We know that for the poor in many parts of the world (including the United States), what seem like small financial challenges to some can be substantial barriers to getting an education.

“It might be that they need the supplies to attend in the first place, or that they’ve already made a substantial effort to go to school, but aren’t benefitting as much as they could because they have nothing to write with or on.”

In the United States, Pen in a Box — which has spread through Byun’s contacts and web outreach — has organizations in 11 high schools, including Connecticut, New York, Maryland, New Jersey, California and Florida. The Holy Name branch is the lone organization in Massachusetts.

The organization has two types of branches. The first type, in an effort to be efficient with funding, sends schools supplies to individuals, organizations and churches going on volunteer and missionary trips overseas.

The other type of branch — the international locations of Pen in a Box and some of the U.S. locations — are those that have students in need close by and are able to distribute school supplies to schools within walking or driving distance.

Pen in a Box first expanded to Princeton High School in New Jersey. Byun’s friends Nina Sachdev and Yerem Kang (whose parents are also missionaries) serve as the branch managers. 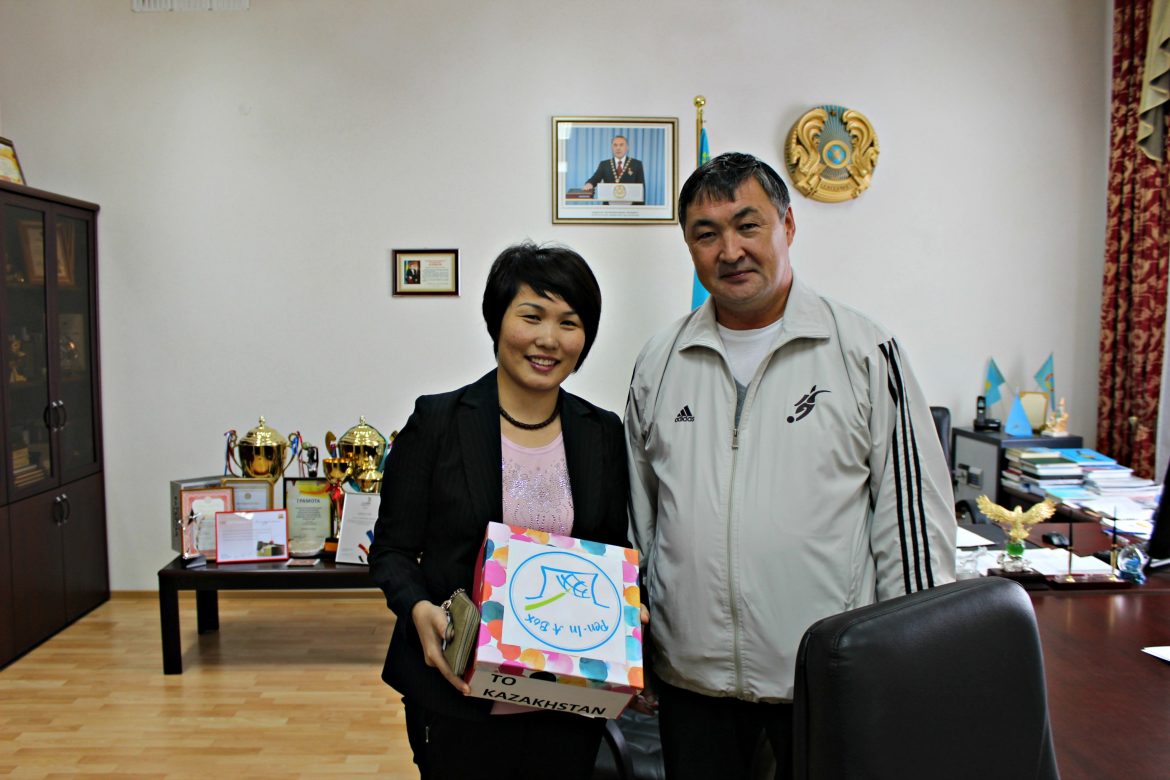 “Because my parents are missionaries, I have a lot of friends around the world,” Byun said.

“Since we branched out to so many places, they too reached out to their friends. It gives it a domino effect of branching out to more and more schools as time passes.”

Byun was born in South Korea and, shortly afterward, the family returned to Kazakhstan to continue their missionary work. David came to the United States in 2012 as part of a foreign exchange program. His younger brother attends boarding school in South Korea.

Byun lives in a private boarding house in Worcester. 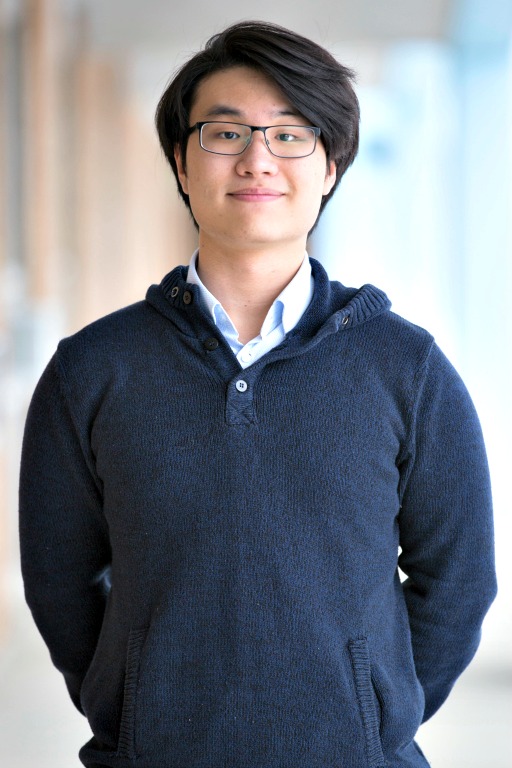 When he’s not gathering school supplies for the next shipment, Byun likes to read and write poetry, and enjoys literary classics such as Ayn Rand’s “The Fountainhead” and Victor Hugo’s “Les Miserables.”

Byun is applying to more than a dozen colleges, including Ivy League schools, and hopes to form a Pen in a Box group wherever he decides to attend.

Byun lists sending projectors and other classroom equipment, partnering with embassies and forming partnerships with people who can provide more to schools in need as priorities for the next chapter of his organization.

Byun and the four other members of Holy Name’s Pen in a Box will continue to operate as they have the past two years — by collecting school supplies during locker clean-outs and accepting supplies from outside groups — without the need of accepting large monetary donations.

In an email to the Sun, John Choi, manager of the 30-member Pen in a Box at Downey High School in Downey, California, said he will also continue volunteering with Pen in a Box even though, like Byun, he will be heading off to college in the fall. He said that “knowing that every effort we make helps better the world in some way” is “enough of a benefit” to keep him involved. 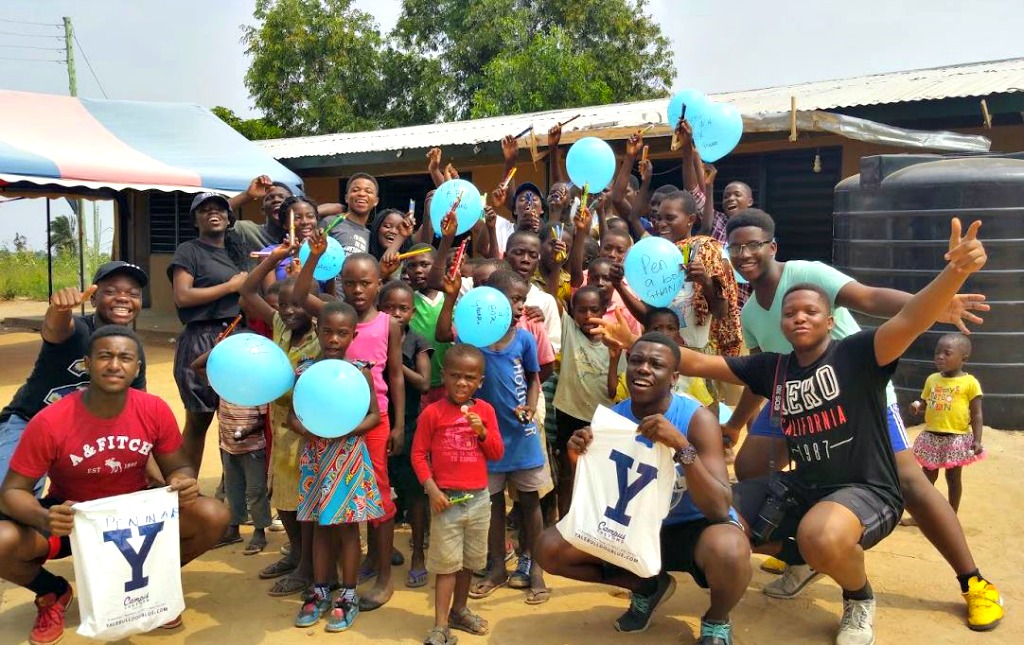 According to Choi, the Pen in a Box members at Downey set up stands near the exits of their school and boxes in each classroom to collect school supplies for their club.

At LEAF Academy in Slovakia, according to leader Silvia Filova, the Pen in a Box group not only operates within their own school, but collects supplies throughout the country.

The seven members of Pen in a Box at LEAF Academy formed the group this past November and started collecting supplies by going to as many schools as possible doing presentations and handing out leaflets.

“It’s a good feeling to be able to help the children around you,” Filova said in an email. “And gives us needed skills for our future — presenting, teamwork, graphic design, and management.”

Likewise, the students at Fazekas Mihály Primary and Secondary Grammar School of Budapest, Hungary, launched their Pen in a Box last September with a large presentation to the student body. That branch holds a collection event every other month.

“The reason why we are collecting books as well, is due to the fact that in the Wesley János Elementary School (for who we are gathering these tools), small children (in the age of 6-12) are learning. Their families are usually so poor, that they just cannot afford buying them storybooks,” branch leader Lili Naómi Zemplényi wrote in an email to the Sun. 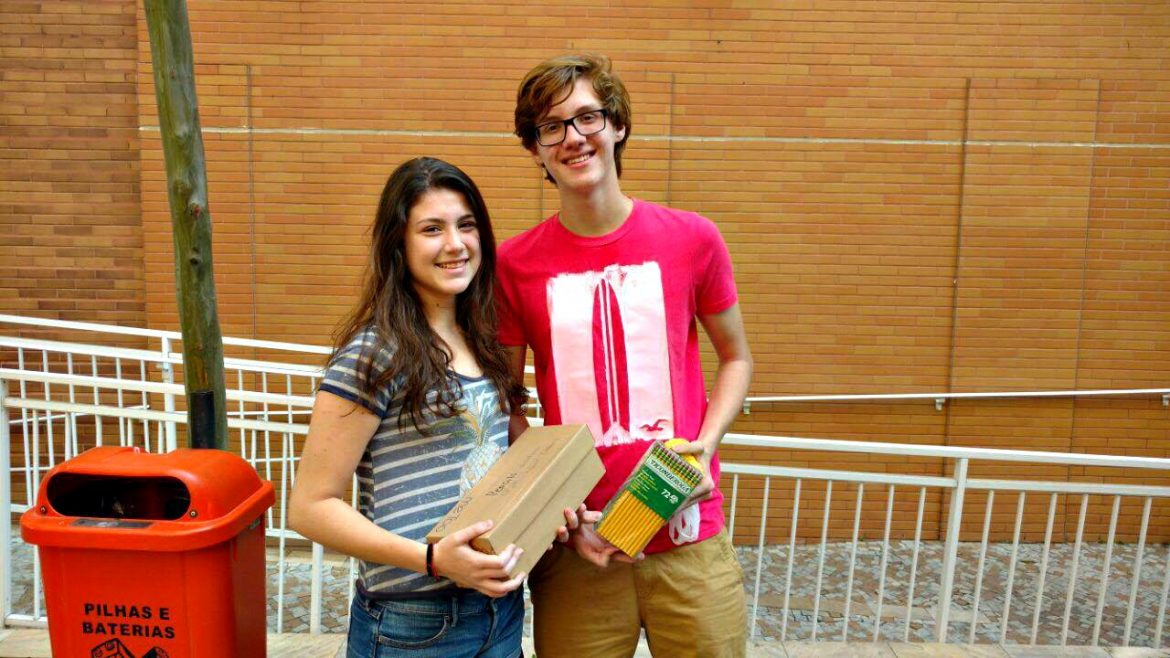 Zemplényi also hopes to continue work for Pen in a Box in college and beyond.

Zemplényi said, “The reason why I am personally proud of doing this program, is due to the fact that I can help. I can have a positive impact on the people. It is so hard to do something nice when you are a teenager. You do not have money you can send to nonprofits, you do not have power to support the underprivileged. But Pen in a Box is an opportunity for us to stand up for those who need our support.”

The Holy Name Pen in a Box will continue after he graduates, Byun said. “Like at the other schools involved, I will have to find a successor to take over the group here next year. I just haven’t decided who that will be yet.”

Pen in a Box uses Facebook, Instagram and its website to update where the school supplies go. Every time a package is received, a photo of the students at the receiving school with their supplies is posted on social media.

Byun said, “We believe that what we are doing is more than simply sending pens and pencils to people that need them. After all, what is left after the ink runs out or the pencils become so small that you can’t use them anymore?”

“We believe that to the students that are receiving the school supplies, what we do gives them hope — hope for a better tomorrow, a better education, and the message that someone cares about them and wants them to have a better future,” he added. “The biggest thing is participating in the project. Not just donating.”

Karlan said, “It’s inspiring to see students from so many places taking such an active, hands-on role in helping, but also that they’re thinking about how to do it in a cost-effective way.

“In the world of fighting poverty, we often say that it’s important to put our resources towards where they’ll have the greatest impact.” 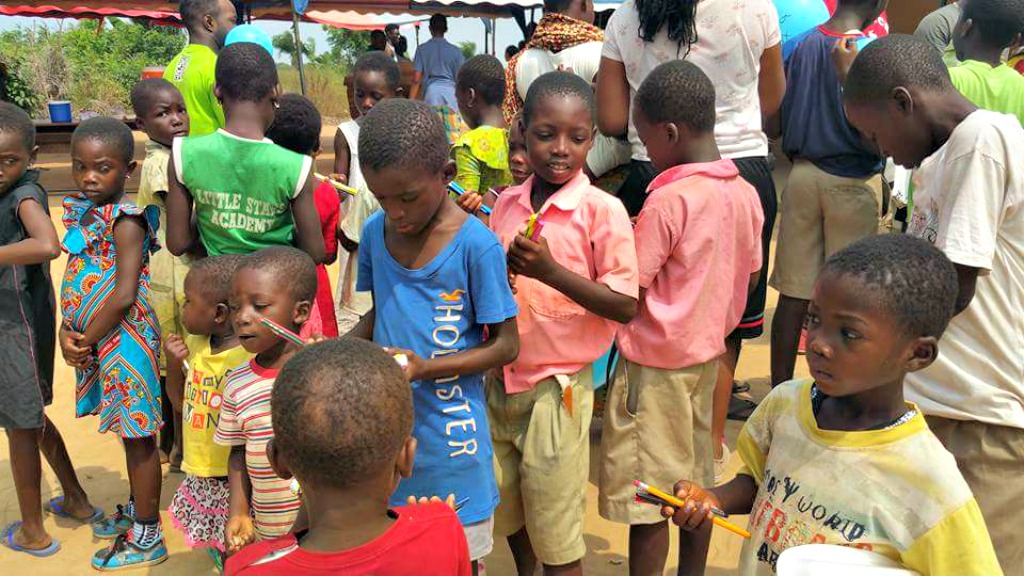 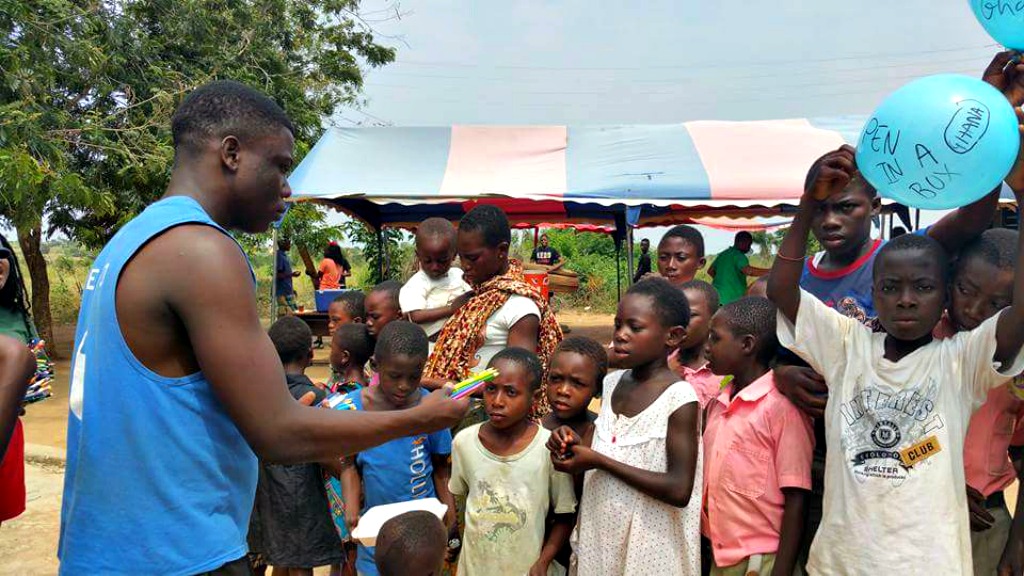 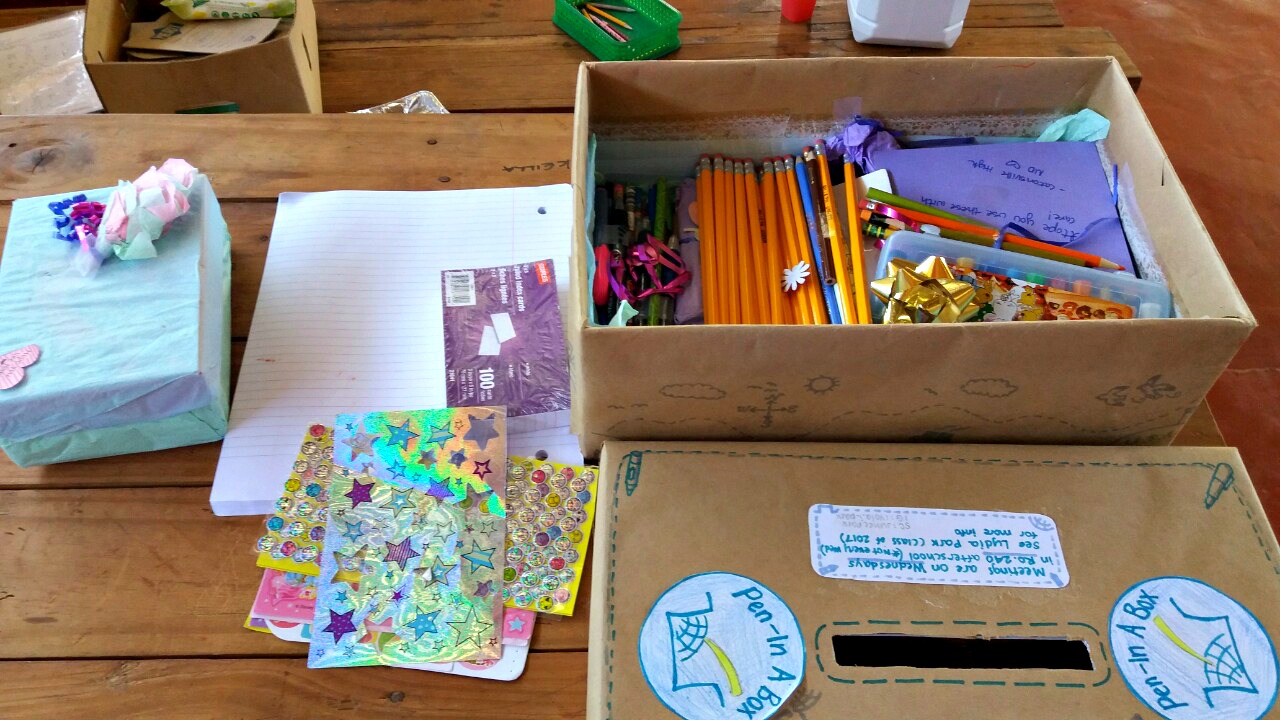 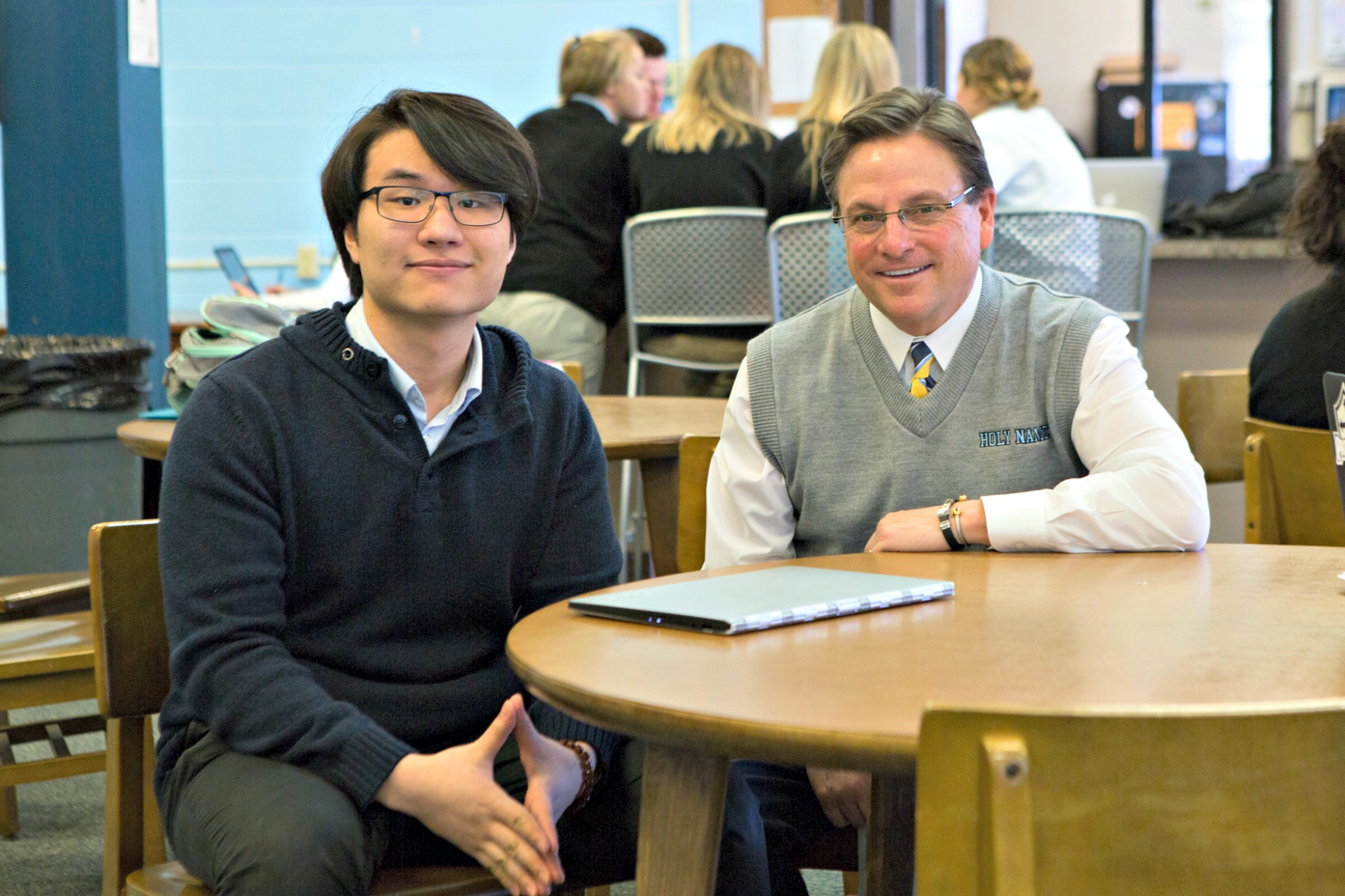 Any students or schools who want to get involved with Pen in a Box can reach out to Byun here: Become a Branch Leader. If any charitable groups or missionaries are planning visits to countries in need and would like to carry school supplies from Pen in a Box, please visit the group’s donation page.