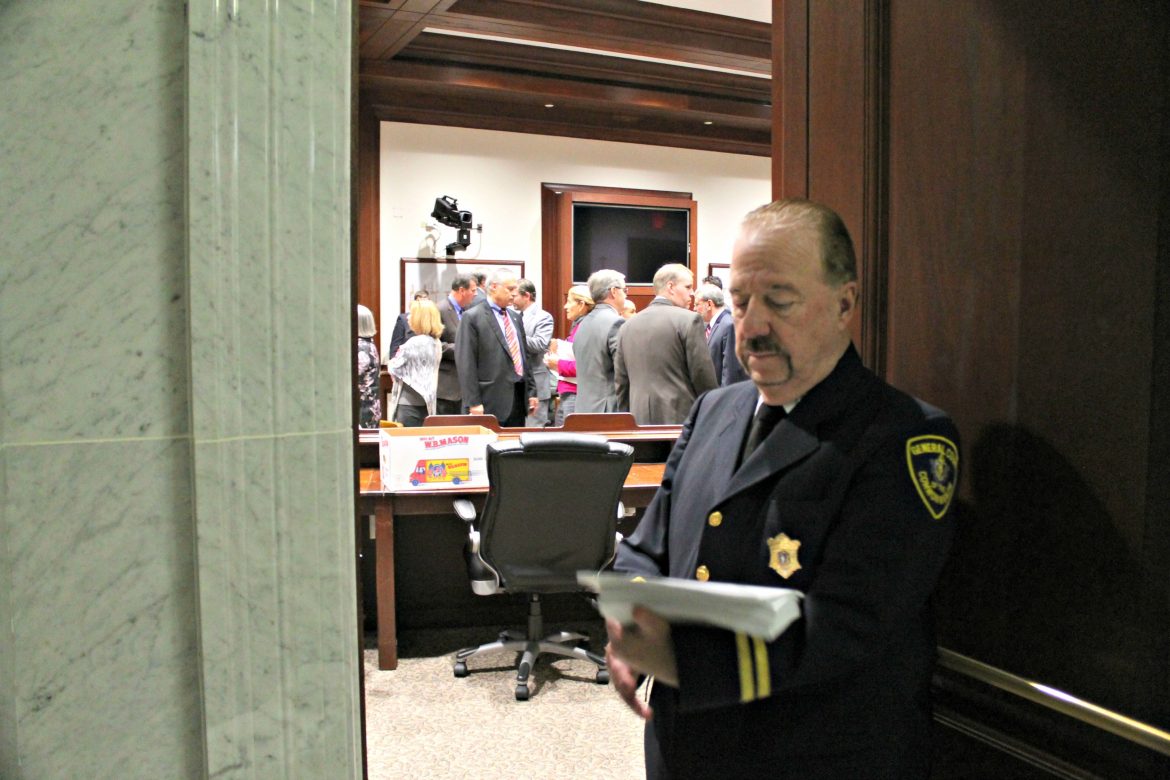 Upon entering a Democratic caucus Thursday, House members were handed a copy of the rules that would govern the 160-member body for the current legislative session. Lawmakers would eventually go on to pass the rules package and override Gov. Charlie Baker's veto of pay raises for public officials.

BOSTON — President Donald Trump’s fledgling administration and legislative Democrats on Beacon Hill may have one thing in common: a willingness to test the boundaries of what the electorate might be willing to stomach before there are political consequences.

One difference, however, is that Trump told voters essentially what he planned to do before the November election. State lawmakers? Not exactly.

Trump crossed the line for many Massachusetts residents and elected leaders late last week when he signed an executive order halting refugee resettlement in the United States and restricting travel for immigrants and visitors from seven majority-Muslim countries.

While the White House insisted this was not the Muslim ban that Trump talked about during the campaign, many immigration advocates viewed it as just that, and those in the state’s higher education and technology worlds warned that it would cut off access to talent that helps drive the state economy.

The action sparked virulent protests throughout the weekend and led to Attorney General Maura Healey filing suit in federal court this week on behalf of the state and the University of Massachusetts seeking to overturn the order on constitutional grounds.

Back under the Dome, House Speaker Robert DeLeo and Senate President Stanley Rosenberg used the cover of the Trump chaos and the New England Patriots run-up to Super Bowl LI as an opportune time to finalize an $18 million package of pay raises for themselves and others by overriding the governor’s veto.

For pay raise proponents, the override went about as smoothly as could be expected given the volume of phone calls and public opposition to the idea. Not one Democrat besides the 12 already on record in opposition defected in the week between the bill’s passage and the vote.

The 116-43 vote in the House and 31-9 vote in the Senate comfortably eclipsed the two-thirds margin needed in each branch to reverse the governor’s veto.

In other words, no one who voted for the raise was swayed by either the governor’s case against the bill or the public outcry.

Knowing they had the votes, leaders largely dispensed with the idea of speaking out to defend the move, but when they did they pointed again to the decades that have elapsed since salaries were seriously adjusted.

Calls from upset voters have reportedly poured in to some elected officials, including Gov. Charlie Baker. But as MassINC pollster Steve Koczela noted on Twitter: “Unless MA voting patterns change, the House could vote to ban apple pie and baseball without worrying too much.”

House Speaker Robert DeLeo last Thursday evening called a caucus for Wednesday, Feb. 8, to discuss with Democratic members how, if at all, the House should respond to recent actions taken by President Donald Trump.

‘Troubled’ by Trump, Baker doubles down on support of refugees, immigrants

Gov. Charlie Baker is “troubled” by the Trump administration’s 120-day stop to refugee admissions and believes the federal government should “reject broad, ‘blanket’ bans on immigration from particular countries,” he wrote in a letter Friday to Homeland Security Secretary John Kelly.

Baker, who has supported Attorney General Maura Healey’s move to add Massachusetts to a federal lawsuit against President Donald Trump’s temporary restrictions on immigration and travel, wrote in the letter that how the order is enforced will ultimately be decided in court.

He said he believes immigration policy changes are needed to improve national and border security, but “more restrictive policies” could have negative effects “on people who have followed the rules, who share our values, and who wish to contribute to our nation’s successes.”

More than 20,000 Massachusetts residents hold H1-B visas — for foreign workers in “specialty occupations” — and 60,000 foreign students attend schools in the state, Baker wrote. He suggested the Trump administration consider the “vital contributions” of academics and healthcare professionals from other countries and encourage immigration by entrepreneurs, potentially by creating a new visa.

“We do not need to abandon our humanitarian commitment to refugees in order to address the security threats raised by illegal immigration,” Baker wrote, saying the administration should “re-prioritize” immigration review to “identify that small minority of applicants” who may pose a real danger, instead of instituting broad bans.

Baker plans to make ‘down payment’ on K-12 funding gap

Gov. Charlie Baker’s new budget bill includes new funding to help school districts deal with rising costs of health insurance and employee benefits, a move he described this week as a “down payment” on an issue raised in a special commission’s report that concluded state funding for schools has failed to keep pace over the years with rising expenses.

In November 2015, the Foundation Budget Review Commission issued a report saying the state’s current school funding system underestimates the cost of educating students by at least $1 billion per year. School district spending on employee benefits throughout Massachusetts exceeds the foundation budget allotment by more than 140 percent, according to the report.

During a WGBH radio appearance Tuesday, Baker said his fiscal 2018 budget “included for the first time … a down payment on one of the issues that was raised by the commission, which is the rising cost of health insurance for cities and towns.”

According to the Department of Elementary and Secondary Education, the change would mean “an additional $66 million is invested in district foundation budgets.” A school district’s foundation budget is calculated based on costs for a variety of categories, including teaching and instruction, benefits, maintenance, guidance services, special education tuition and administration.

During his monthly “Ask the Governor” segment, Baker mentioned the additional funding on Tuesday after a caller named Brian from Lynn asked him what he would do to get more cash flow into schools while many communities grapple with tight budgets.

“I’m sure this will end up being the source of debate in the Legislature between now and the end of the session, but I can tell you that making sure that our schools are funded has been a priority for us since we got here, and it’s going to continue to be going forward, and this down payment on the Foundation Budget Review Commission thing I think is an important first step toward resolving some of those issues as well,” Baker said.

Only nine House members received extra pay before 1977. That number will rise to 80 under DeLeo’s plan, according to a Watertown democrat who opposed the pay raise bill.

Reps. Jonathan Hecht of Watertown, Shawn Dooley of Norfolk and James Lyons of Andover were the only representatives to take the floor and debate the pay raises prior to the override vote.

They all spoke against passing the bill, with Dooley saying it was precedent-setting and would add to the power of the House Speaker by enabling him or her to decide how much House members receive in their paychecks.

The Watertown Democrat said only nine House members received extra pay before 1977, a number that rose to 28 in the late 1970s, 34 in the mid-1990s, and 55 in recent years. That number will rise to 80 under DeLeo’s plan, Hecht said, or two-thirds of the majority party members.

With nine separate pay levels among House members, Hecht speculated that House members will become more concerned about the desires of House leaders who decide which representatives get extra pay than about their constituents’ concerns.

“This order walling off our state and our country is not something that we support, and it puts our economy and many people in our Commonwealth at risk and feeling insecure,” Lt. Gov. Karyn Polito told State House News Service. 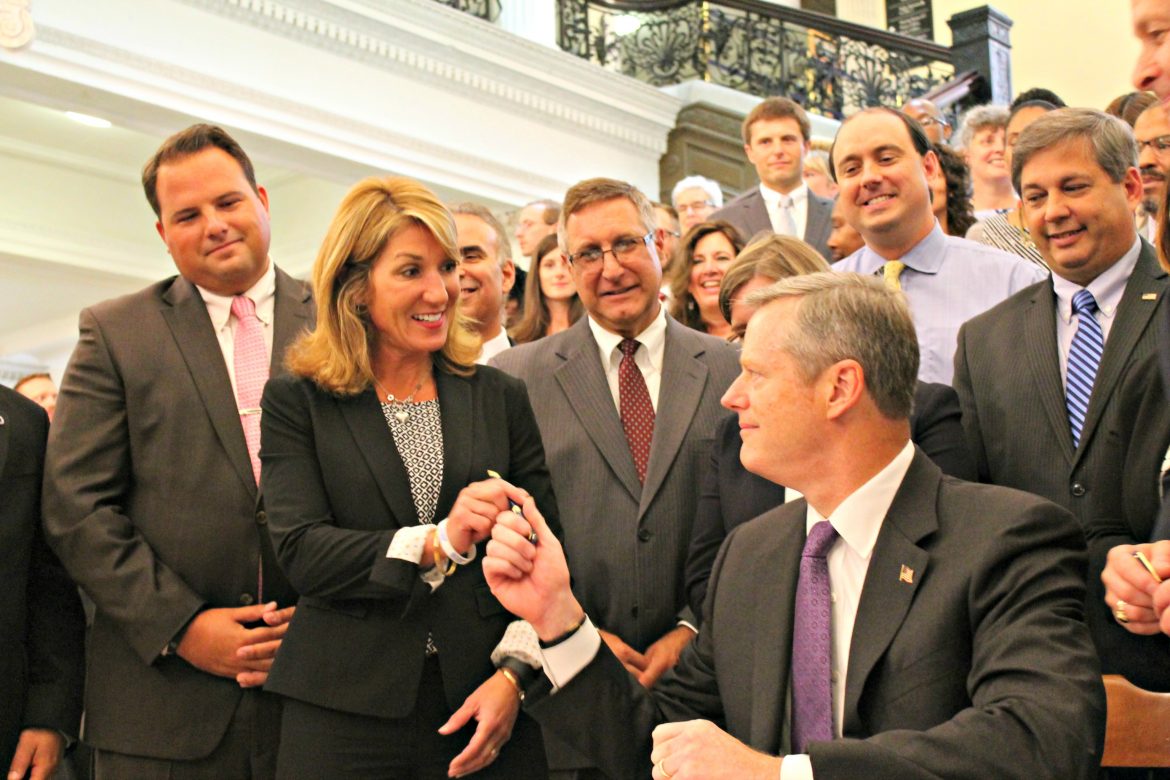 Lt. Gov. Karyn Polito and Gov. Charlie Baker, republicans, have much to consider before a re-election bid in Dem-heavy Massachusetts.

The Shrewsbury Republican suggested she would not attend protests that have sprung up in response to the order, but said she supports those taking action.

Gov. Charlie Baker has criticized Trump’s unilateral action to bar travelers from Iran, Iraq, Libya, Somalia, Sudan, Syria and Yemen for 90 days, knocking both the way the executive order was rolled out and its impacts in Massachusetts.

The president said the order is intended to protect Americans from terrorism, and said he would “find ways to help all those who are suffering” while prioritizing the safety of Americans.

Homeland Security Secretary John Kelly said the order is not a ban on Muslims, and said “religious liberty is one of our most fundamental and treasured values.”

“America is a proud nation of immigrants and we will continue to show compassion to those fleeing oppression, but we will do so while protecting our own citizens and border,” Trump said in a statement. “America has always been the land of the free and home of the brave. We will keep it free and keep it safe.”

A Jan. 30-31 Reuters/Ipsos poll found 49 percent of Americans agree with the order while 41 percent disagreed, with division following party lines. The poll of 1,201 people nationwide has a 3 percent margin of error.

Neither Baker nor Polito voted for Trump.

Asked if she supports or disapproves of the order, Polito said, “I disapprove of the executive order, for the reasons first and foremost that we have a global economy here in Massachusetts — from academics to health care to the business economy.”

Baker and Polito face a delicate couple years if they seek re-election. Trump’s election has polarized the electorate nationally, and Baker and Polito have relied on support from Democrats and independents in addition to their Republican base.

Polito has a history of challenging people in her party.

When she was a member of the House, Polito joined a group of Republican lawmakers who unsuccessfully sought a change in leadership of the caucus, backing Lew Evangelidis, now the Worcester County sheriff, following Republican losses in the 2008 election.