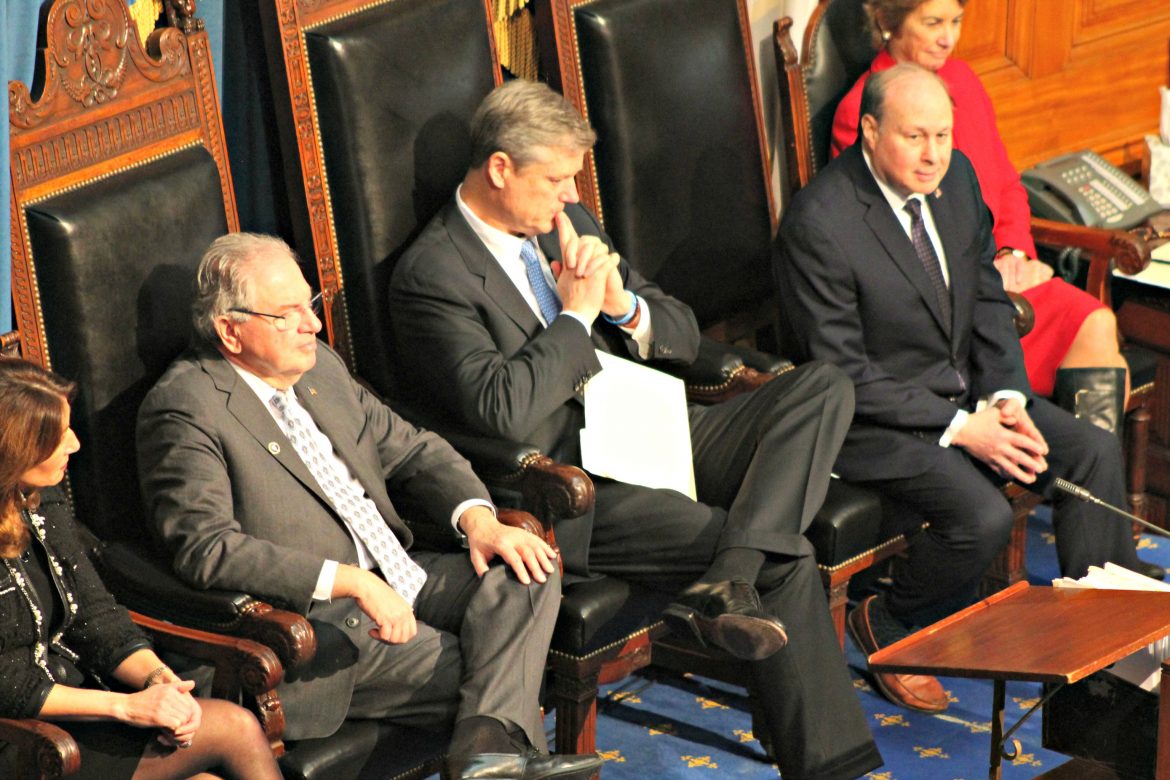 If March college basketball is one of the biggest drains on workplace productivity of the year, then Beacon Hill bracketology has the opposite effect.

House Speaker Robert DeLeo and Senate President Stanley Rosenberg finally filled in their seeding charts this week, allowing for the legislating process to truly begin. And no two chairmen will be more under the gun than Braintree’s Rep. Mark Cusack and Somerville’s Sen. Patricia Jehlen.

Cusack and Jehlen were tapped to co-chair the new Committee on Marijuana Policy, starting a four-month countdown-clock for the two Democrats and their committee to craft a comprehensive re-write of the recreational marijuana ballot law.

Jehlen, a legal marijuana supporter, was picked over Sen. Jason Lewis for the chairmanship after Lewis spent much of the past two years becoming the Senate’s expert on marijuana policy.

The problem for Lewis, however, was that he came out of that process an ardent opponent of legal pot and essentially tipped his hand by filing numerous bills already this year to change the law. 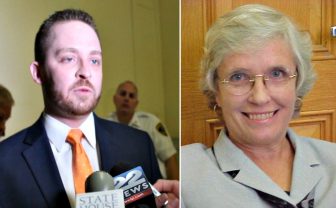 Instead, Lewis will serve as Jehlen’s vice-chair, and Rosenberg is confident that Jehlen will be able to engage with the marijuana advocate community in ways that Lewis could not have.

On the House side, Cusack is something of a wildcard. He would not say Thursday how he voted on the ballot question, and DeLeo touted Cusack’s open-mindedness on the issue as a chief selling point for his selection to lead the pot effort.

Gov. Charlie Baker has suggested he would like to see a bill even earlier than June. But the Republican has his plate full as well dealing with a new White House administration that challenges, on a near daily basis, his desire to remain above the fray, and getting a new Supreme Judicial Court nominee confirmed by a Governor’s Council that increasingly makes Congressional infighting look like child’s play.

For the second straight week, the Governor’s Council, the elected body that vets Baker’s judicial nominees, dissolved into a puddle of name-calling, accusations and fist-pounding.

Though the animosity ostensibly stemmed from a disagreement over how the vote was handled for a Superior Court nominee, the eight-member council can barely be in the same room together anymore. And the anger runs deeper than one nominee.

And all of this transpired within the governor’s suite with Lt. Gov. Karyn Polito hopelessly trying to maintain order, and staffers poking their heads out of offices wondering what could be going on.

State senators laid out a multifaceted criminal justice reform agenda last week, pitching legislation that would eliminate mandatory minimum sentences for nonviolent drug offenders, limit the use of cash bail, and give police officers discretion to issue civil citations instead of criminal charges for certain misdemeanors.

A group of 10 Senate Democrats who have all filed bills proposing changes to the state’s justice system said momentum is building behind the issue and expressed optimism that some of their ideas will make it into law.

“I think you’re hearing a fresh message today, and that’s that all the prep work has been done,” Sen. Michael Barrett of Lexington said. “All the groundwork that one might have expected has been laid. Now really is the two-year window for action. I think we’ve started up all our engines, I think we’ve fueled. These issues are ready to take off, and over the next two years we expect to see some results.” 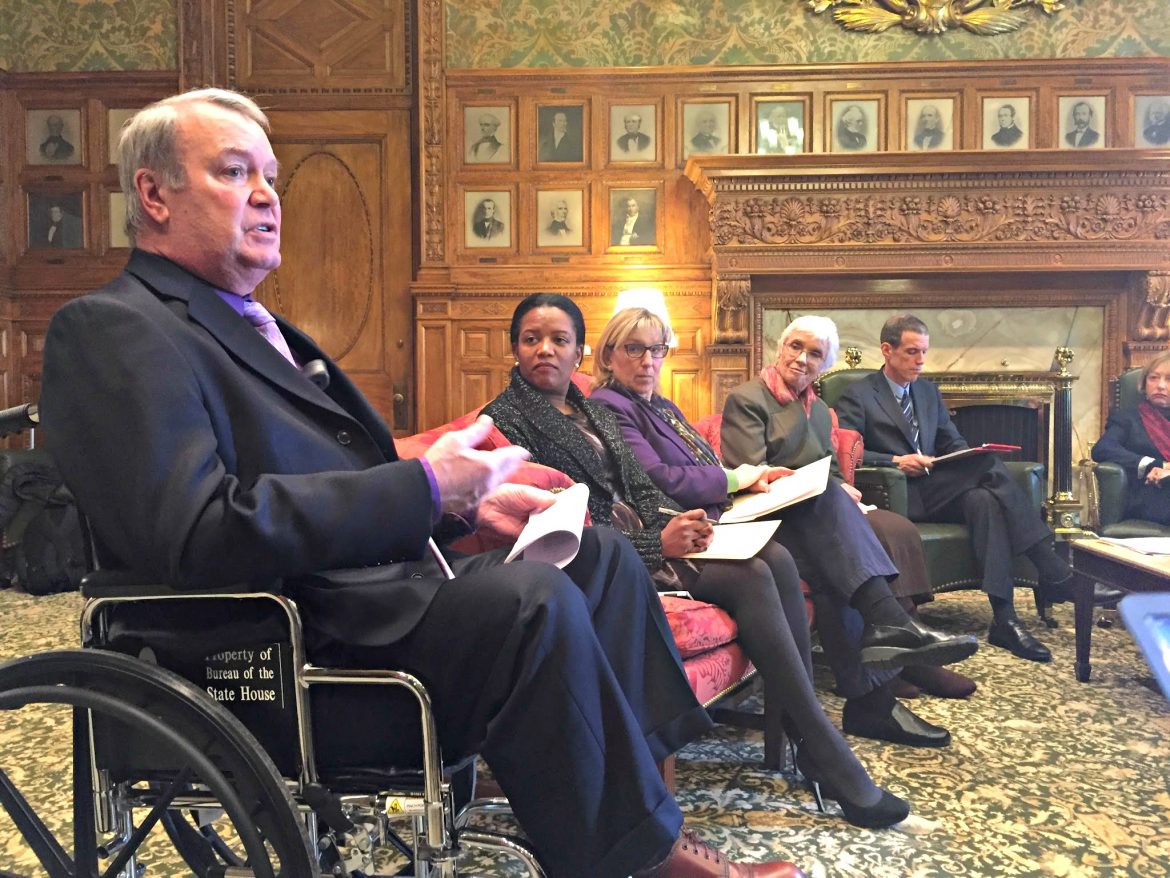 Sen. Will Brownsberger, the Senate’s Judiciary Committee chairman, said this is the year when “stars may align for us to make progress” on criminal justice reform, pointing to the accumulation of years of work on some reform ideas, media attention around the Black Lives Matter movement, and the completion of an outside review of the state’s criminal justice system.

Brownsberger said he divides justice policy into three main areas: front-end, focusing on diversion and other pre-incarceration programs; back end, covering what happens after someone is released from prison; and “collateral consequences” or “all the things that come after a sentence,” such as the fees and fines that convicts face.

The CSG report “focuses on a portion of those back-end issues,” Brownsberger said.

Several of the bills senators highlighted Feb. 16 deal with the “front end” of the justice system, including proposals dealing with police de-escalation training, sentencing reform and bail reform.

The bail reform bill, filed by Sen. Ken Donnelly of Arlington, calls for limits on the use of cash bail and the development of a risk-assessment tool to predict a defendant’s probability of returning to court.

A Sen. Michael Moore bill would allow police officers to issue citations for certain misdemeanors. Moore, of Millbury, said his bill would amend an existing law that allows for decriminalization of some low-level offenses in a courtroom, making the process begin instead at “street level.”

“Our law enforcement community is basically handcuffed,” Moore said, adding that granting additional options to police officers could help keep people out of court and reduce the burden on the justice system.

The senators also touted new versions of legislation that passed the Senate last year but were not taken up in the House. Sen. Karen Spilka filed a bill that would create a process for the expungement of certain juvenile offenses, and Sen. Patricia Jehlen sponsored bills seeking to create a medical parole program and to raise the level at which larceny becomes a felony offense from $250 to $1,500 — all measures the Senate approved in some form in 2016.

McGovern: ‘I swore to defend U.S.’

When I took my oath I swore to defend the US. America can’t ignore Russia attack on our democracy. We must #InvestigateNow. #DoTheOath pic.twitter.com/Llgbv9pEw9

“I’m going to step down as the chair of the Regional Transit Authority Caucus in the Legislature,” Chandler told Church, “because I feel I’ve accomplished what I set out to do. And hopefully, maybe Anne Gobi will take it and she will do a very good job because she has an awful lot of towns that have no transportation.”

Earlier in the show, Chandler cited increased RTA funds and forward funding, which brought the WRTA toward solvency. [Feb. 14, WCCA-TV]

Gov. Charlie Baker is often loath to talk about controversies churning outside the state’s borders, but late last week he waded into national and international waters, joining calls for investigation into the relationships between U.S. and Russian officials.

“Most of the folks in Washington at this point have said there needs to be a full vetting of this,” Baker told reporters Feb. 16 after addressing the Greater Boston Chamber of Commerce. “I think one of the advantages of a full vetting is people will get a much better understanding about what actually happened when, and a big question mark for the public can be satisfied.”

President Trump asked for and received the resignation of his national security advisor, Michael Flynn, after reports that Flynn had spoken to Russia’s ambassador to the U.S. about sanctions against Russia around the time they were issued by the Obama administration.

After news of Flynn’s conversations with Sergey Kislyak – but not their content – was reported, Vice President-elect Mike Pence went on CBS’s “Face the Nation” ahead of the inauguration to vouch for Flynn, saying they “did not discuss anything having to do with the United States’ decision to expel diplomats or impose censure against Russia.”

The Obama administration took action against Russia because of the country’s alleged hacking of Democratic National Committee emails. As a candidate, Trump encouraged Russia to release thousands of emails that his rival, Democrat Hillary Clinton, had deleted – a controversy of the 2016 election.

Baker received another query about Russia from a caller during his Thursday appearance on WGBH’s Ask the Governor. Melissa in Walpole asked Baker about an independent investigation about Russia’s motives.

“There are a lot of folks in Washington – Democrats and Republicans – who are talking about some sort of Congressional review and investigation around this stuff,” Baker replied. “At some point just for the integrity of the process, that’s probably going to be a good idea.”

The number of deaths related to the powerful opioid fentanyl in Massachusetts continues to rise, according to a new state report.

The Department of Public Health’s quarterly report on opioid overdoses found that fentanyl was present in 75 percent of the 1,374 opioid deaths in 2016 for which toxicology screens were available.

A total of 1,465 people died of unintentional opioid overdoses in 2016, with another 469 to 562 suspected opioid-related deaths, according to the report released late last week.

Rates of deaths involving fentanyl — a synthetic opioid prescribed for pain treatment that is also illicitly produced for abuse — have grown at approximately the same rate that heroin death numbers have fallen, the report said. It said heroin or “likely heroin” was present in roughly half of opioid-related deaths with toxicology screens in the third quarter of 2016.

Emergency medical service incidents involving the overdose rescue drug naloxone rose 47 percent in the first three-quarters of 2016 compared to the same period in 2015, according to the report.