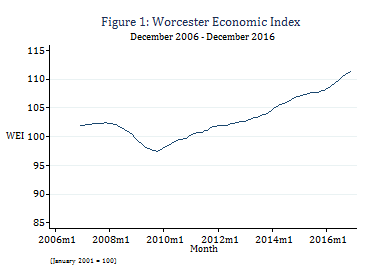 According to the Worcester Economic Index, a quarterly economic analysis compiled by Assumption College Professor of Economics Thomas White, Ph.D., the Worcester economy grew 2.1 percent in the fourth quarter of 2016, which combined with solid growth turned in earlier in the year made 2016 the strongest year for the local economy since before the Great Recession.

“Over the course of 2016 all three of the variables used to compute the WEI moved in a positive direction,” White said. “And compared to December 2015, the WEI finished the year up 3.0 percent, which marks the highest annual growth since before the Great Recession.”While the forecast of the Worcester Economic Index is based on four national leading indicators, White said it is important to also examine data that is more locally focused. The three local leading indicators which are followed for this project are: online help-wanted advertisements for the Worcester NECTA [New England city and town area], new business incorporations also for the Worcester NECTA, and statewide initial unemployment claims.

“Currently, the three local leading indicators are offering mixed signals for the future direction of the economy,” White said. “Continuing its trend throughout 2016, online help-wanted advertisements fell substantially compared to a year ago and therefore this indicator is providing a negative signal at this time.

“Over the next six months, the WEI is expected to grow at a rate of 1.3 to 1.7 percent,” said White. “Both national and local leading indicators are providing mixed signals concerning future economic activity.”

The program strengthens organizational, local, regional and national capacity to mitigate against, prepare for and respond to disasters and complex emergencies, as well as asymmetric, multimodality terrorist events.

“Counter-Terrorism Medicine” is a new area of study and mandated by the increasingly complex and devastating terrorist attacks seen recently around the world.

“We are proud to have the opportunity to host the certificate in disaster and counter-terrorism emergency medical service program,” said Judith Kenary, associate vice president for Academic Affairs.

Dr. Ciottone, the course director said: “In the Emergency Management field it is important to be proactive rather than reactive. With this program participants learn the necessary steps to take should a disaster or terrorist attack occur.”

The certificate program is a three-hour class which takes place 6-9 p.m. Tuesdays for eight consecutive weeks beginning on Tuesday [Feb. 7]. The program will include topics such as Prehospital Disaster Medicine: Principles, Preparedness, Field Operations and High-Threat Terrorist Event Response. Participants who fully complete the program will receive a Certificate of Completion and uniform DC-TEMS patch.

Fallon Health and Summit ElderCare, in partnership with the YWCA Central Massachusetts, is holding a Couples Team Workout. 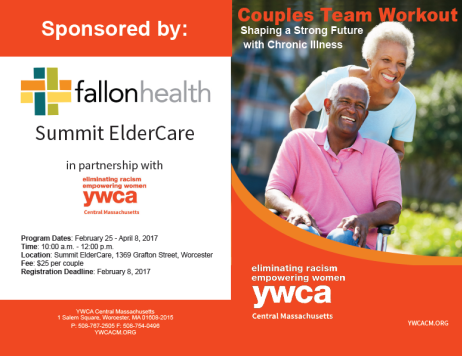 Couples Team Workout is a program for couples in which one partner has a chronic illness, and the other is transitioning into a role of partner/caregiver. The person with the chronic illness and the caregiver participate together, using teamwork to shape a strong, well-planned, positive and meaningful future, with a focus on the needs of both.

The goal of the program is for couples faced with chronic illness to acquire tools and resources to shape a strong, well-planned, positive and meaningful future, with a focus on the needs of both partners.

The WPI men’s basketball team is using the 3-pointer this month to help raise money and awareness for the American Cancer Society.

The team is asking fans to donate for every 3-pointer the team makes this month.

Teams can be matched up against their rival schools to see who can raise the most funds from their 3-point shots, and fans can follow the leaderboard to see who will become the 3-Point Challenge Champion.

“The WPI Men’s Basketball Team is proud to participate in this innovative way to raise money for the American Cancer Society,” coach Chris Bartley said. “The 3-Point Challenge has taken on significant meaning for me as a coach. A young man I coached as an assistant at both Medford High School and Wentworth Institute of Technology, Kenny Bascomb, just died from a long battle with cancer last Saturday morning. He was just in his 30s with five children, which makes this loss all the more devastating.

“I applaud all of the programs across the country for committing to the 3-Point Challenge so we can take the steps needed to find a cure.”