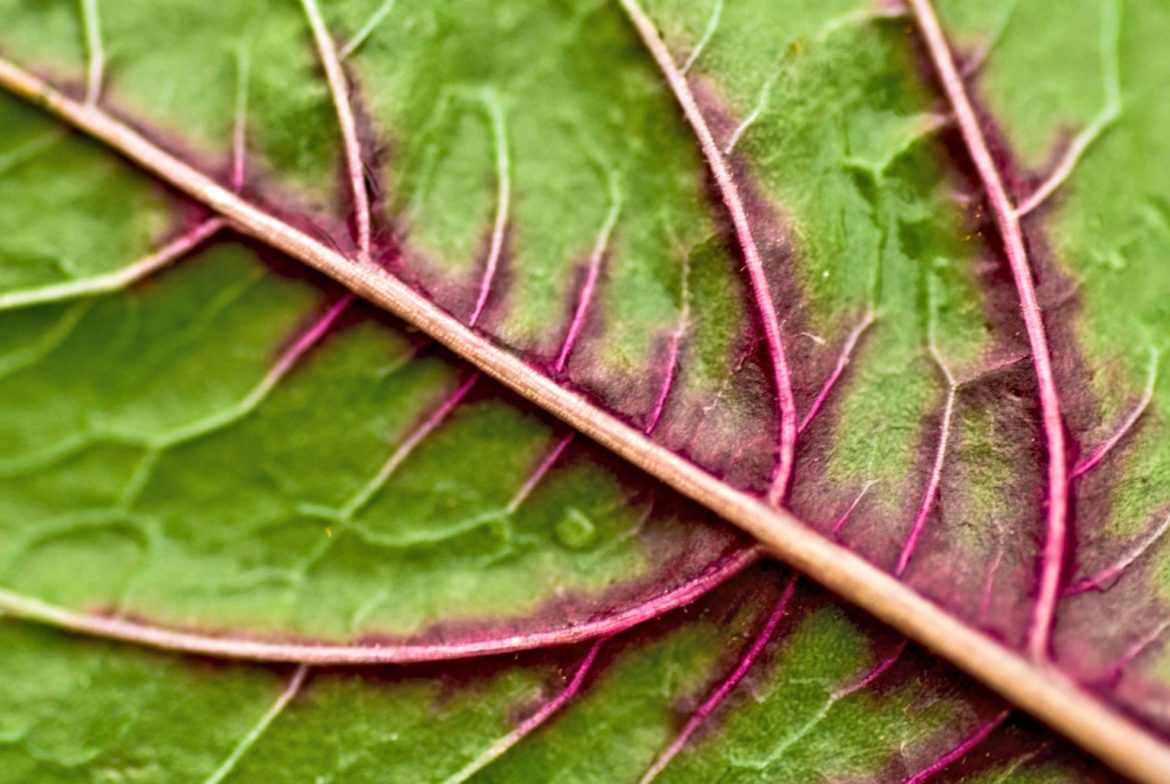 Spinach leaves -- a key ingredient in a promising biomedical advancement made at WPI.

Most of us see a spinach leaf as something to eat (or not).

Imagine the leap it took for someone to see it as the solution to a biomedical research dilemma.

That leap is spurring astonishing research in labs at WPI and two more U.S. college campuses.

The key is in the veins, the complex network visible in any plant leaf held to the light. Those countless interconnected tubes of varying size transport water, nutrients and other materials to and from the plant’s stem.

It’s reminiscent of the human circulatory system. And therein lies an improbable idea that just might work.

Biomedical scientists have been wondering how they could scale up regenerative tissue research to the point that someday, organ tissue with a built-in vascular system could be implanted in humans suffering from disease or traumatic injury. A heart attack victim, for example, in whom some heart tissue has died, could receive a graft of lab-grown, beating, vascularized human heart tissue.

Though that goal is still a long way off, it’s a significant step closer thanks to the engineering genius of nature — and to the insight and hard work of researchers at Worcester Polytechnic Institute, the University of Wisconsin-Madison and Arkansas State University-Jonesboro.

The WPI researchers and their collaborators have succeeded in growing human heart cells on spinach leaves. And these cardiac cells “beat” on the leaves, just as they do in the body.

The procedure first involves using a detergent solution to strip the leaves of their plant cells, turning the leaves into floppy, translucent growing platforms with the complex leaf veining intact. Cardiac cells are then grown on the leaves and also, a statement from WPI last week explained, the spinach-leaf veins are seeded with the human cells that line blood vessels.

With any luck, spinach-leaf veins could someday transport blood and other life essentials inside people. The ongoing studies open the door to using the treated, stacked spinach leaves to “grow layers of healthy heart muscle to treat heart attack patients,” the statement said.

The researchers will report their findings in the May issue of Biomaterials. Their paper, “Crossing Kingdoms: Using decellularized plants as perfusable tissue engineering scaffolds,” has a WPI graduate student, Joshua R. Gershlak, as lead author.

In a video posted with the WPI statement, Gershlak noted that the major limiting factor for tissue engineering is the lack of a vascular network. Lab techniques “can’t fabricate microvasculature the way that the body needs it” for oxygen transport, he said.

As the WPI statement explains: “Current bioengineering techniques, including 3-D printing, can’t fabricate the branching network of blood vessels down to the capillary scale that are required to deliver the oxygen, nutrients, and essential molecules required for proper tissue growth.”

So the WPI team and its collaborators turned to the world’s top engineer: Nature.

The researchers chose spinach, but could have tried any number of other plants.

“[W]e just kinda started looking into whether or not the cardiac cells will attach [to a spinach leaf], and whether they would continue to contract on this spinach leaf, and they do, and they seem to stay contractile for a long period of time,” Gershlak said in the WPI statement. “They look and act like normal cardiac cells when they’re on there, so … it seems to be very promising.”

In the video Glenn Gaudette, a professor of biomedical engineering at WPI, agrees that, although much work remains, the spinach scaffolding has the potential to help patients in the future.

“What we’re trying to do is grow cardiac muscle on these leaves, which then can be perfused with a blood source by the veins that are inside the leaf,” Gaudette said. “And so we can, in theory, sew those veins into the native arteries in the heart and therefore produce a contractile muscle that can replace the infarcted or the dead tissue in the heart.”

The WPI professor — whose research is supported financially by the National Institutes of Health and National Science Foundation — expresses the same sort of amazement many of us feel when hearing news like this.

“[To] be able to take something as simple as a spinach leaf, which is an abundant plant, and actually turn that into a tissue that has the potential for blood to flow through it, is really very, very exciting and we hope it’s going to be a significant advancement in the field,” Gaudette said.

Not every experiment meets with such early success or holds such vast practical promise.

But examples like this help highlight the incalculable value of all kinds of scientific pursuit and the intellectual leap-taking allowed by a strong platform for research.

We agree with University of Massachusetts Medical School Chancellor Michael F. Collins, who wrote in an  As I See It commentary in the Telegram & Gazette March 19 that the Trump administration’s proposal to cut at least $6 billion from the National Institutes of Health would deal “a devastating blow” to scientific and medical research.

The chancellor also wrote: “A president’s budget speaks to our values as a nation, and this is not the time to reduce or withdraw vital investment in science and biomedical research. American innovation has put us at the forefront of global discovery and it would be a tragedy to discard generations of investment in our nation’s health.”

Pursuing daring ideas in the lab — teasing out the secrets of nature in order to inform us, help us and even, sometimes, heal us — is at the beating heart of research. And, mostly unheralded, it’s happening daily in Worcester, because of our outstanding colleges and impressive biotechnology infrastructure and foresight.

Science needs the government’s healthy support. Science more than pays it back.

WPI’s exploits with spinach are showing us, again, why this is so.