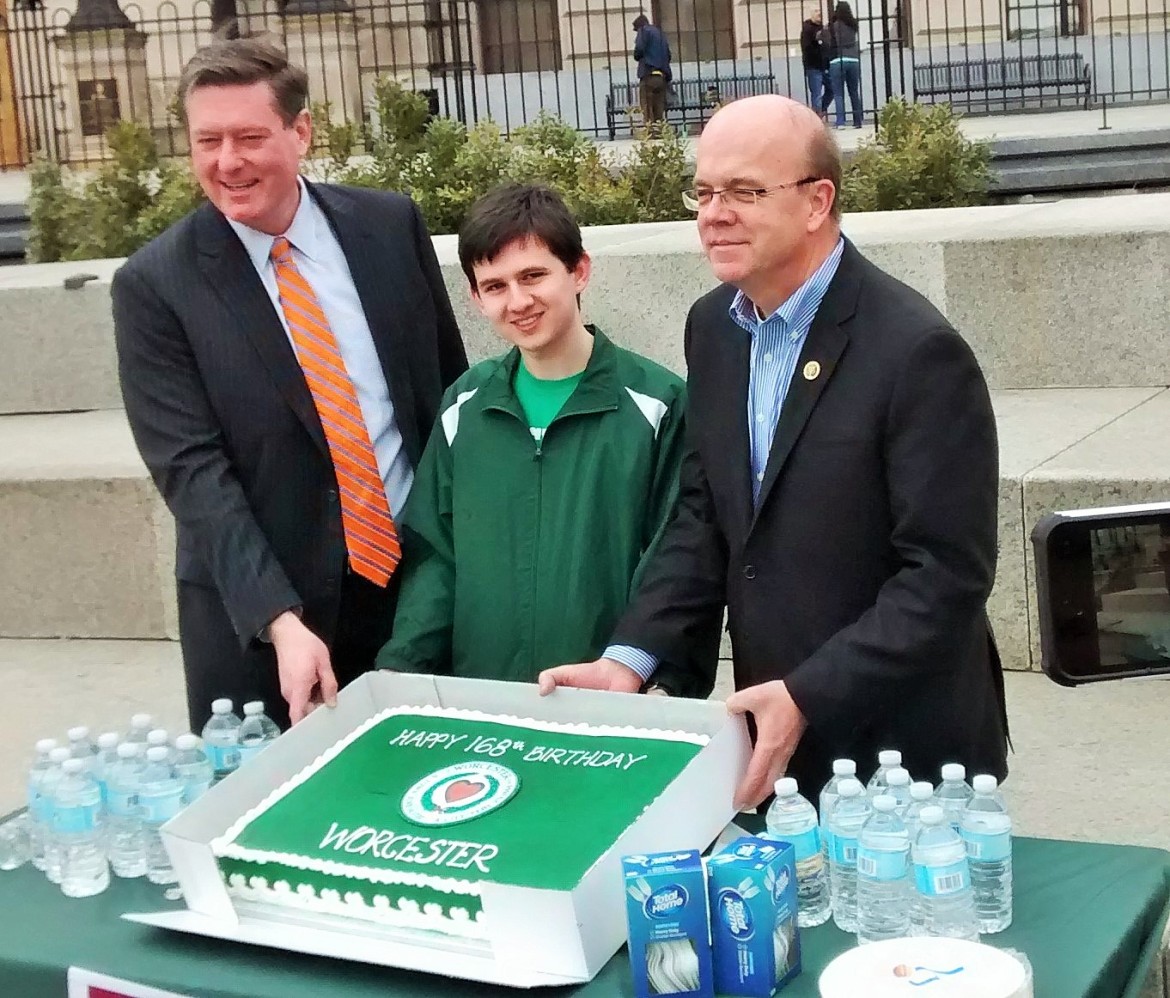 U.S. Rep. Jim McGovern, right (shown at the city's 2016 birthday celebration on Worcester Common), has plenty on his plate as he grapples with many Trump administration positions.

“We ought to look at this moment as a privilege to be on the playing field and to engage in these battles. … Ten years from now people are going to ask what you did at this time. I think it’s important for people to stand up and to resist when it’s appropriate.”

If the 2nd Congressional District were carved into Worcester County only, U.S. Rep. James P. McGovern, D-Worcester, might have a problem. Many of those towns voted for Donald Trump in the presidential election.

But the 2nd has roots in Franklin and Hampshire counties as well, with liberal enclaves like Northampton and Amherst that combined with Worcester should keep McGovern safe as long as he wants to hold office.

The 2nd voted for Hillary Clinton over Trump by a margin of 60 percent to 40 percent. So that would indicate that the district is safe for McGovern for at least the time being.

To that end, it’s not your imagination: McGovern, one of the most unabashed liberals in Congress, has been ubiquitous in active resistance in the weeks since Donald Trump was elected president — calling for, among other things, an independent investigation into Russian influence in the election.

“If you don’t have an independent investigation,” he said, “people aren’t going to believe the results.”

His higher-than-normal profile has been a conscious course of action.

“There’s so much happening that I think it requires more responses and more action, more resistance,” he said in a wide-ranging exclusive interview with Worcester Sun. “I want to protect the values I think are important to the country.”

McGovern said he is comfortable that his views continue to be shared by the majority in a district that he tours frequently. Most of the communities within it voted for Hillary Clinton. More to the point, he has not seen a serious challenge since his first re-election bid in 1998.

“I do feel I represent the district in terms of their politics,” he said. “I represent a big chunk of Worcester County which tends to vote red in elections, so I know there are people out there who support Trump and believe he will make a positive difference in their lives. I think a lot of people voted for Trump out of frustration. I understand that.

Indeed, though Clinton won the 2nd District handily overall, when broken down by municipality, the surprise runner-up took 33 cities and towns to Trump’s 30. And more than 1 in 3 votes came from 3 of those 63 cities and towns (Amherst, Northampton and Worcester).

In the Trump administration, McGovern finds much to dislike. Take, for example, the new head of the Environmental Protection Administration, Scott Pruitt, a former Oklahoma attorney general who made a name for himself in part by suing the EPA.

“This is a guy who is a climate change denier,” McGovern said. “In this day and age, to appoint somebody to the Environmental Protection Agency who doesn’t believe in science is unconscionable. Climate change is real. We are seeing the effects of it, not only in the United States but around the world.

“I have a lot of farms in my district. I do farm tours every year. The last tour I did a few months ago one of the first things out of every farmer’s mouth was about climate change, these kind[s] of unpredictable weather patterns, late frosts, droughts.”

2016 was the third consecutive year to be labeled the warmest year on record by NASA and the National Oceanic and Atmospheric Administration, which found the 2016 global average temperature 1.78 degrees Fahrenheit higher than the mid-20th century mean.

“We have an opportunity to do something about it,” McGovern said. “The question is whether we will act accordingly or whether we’ll retreat. And it sounds like based on who our EPA administrator is that we’re going to retreat. That’s unfortunate, not only for our kids but for our grandkids and great-grandkids.”

For someone who has spent a long time in Congress pushing for programs that aid the poor and middle class, like food assistance and universal health care, the switch to an unexpected defensive stance is not welcome.

But McGovern said he is realistic about this moment in time and his role in it.

“This is not the way I hoped things would be. I thought we would be talking about how we deal with climate change and how we move forward in supporting projects to rebuild infrastructure. I thought we’d be talking about making college more affordable, investing in clean renewable green energy, how we could support our farmers and small businesses, expanding health care for people and making health care more affordable. Because of this election we find ourselves where we have to be on the defensive and try to hold onto some of these programs.”

McGovern said it serves no purpose for people unhappy about the election to wallow in depression.

“We ought to look at this moment as a privilege to be on the playing field and to engage in these battles,” he said. “Ten years from now people are going to ask what you did at this time. I think it’s important for people to stand up and to resist when it’s appropriate.” 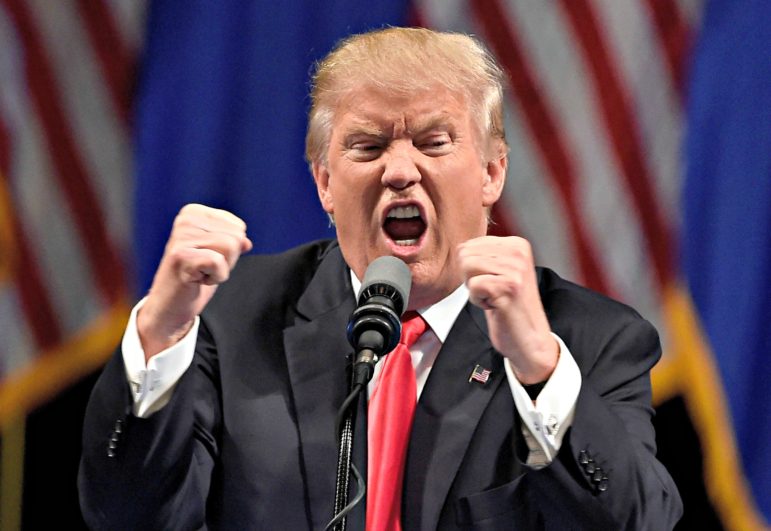 “I am horrified by Donald Trump’s policies. His healthcare bill may throw 10 [million] to 15 million people off of health insurance and raise costs on people and provide them with fewer healthcare protections.

“I’m frightened by his erratic behavior, these tweets at 5 and 6 in the morning, conspiracy theories in which he claimed that President Obama wiretapped Trump Tower, the people he surrounds himself with, the Steve Bannons of the world, people who are living in an alternative universe.”

More from the March 19-25 Worcester Sun:

McGovern said he sides with those who question Trump’s mental state, and believe the nation would be better off with Vice President Mike Pence at the helm. He does not believe that Trump is any less conservative than Pence.

“I was kind of hoping that after the election Trump would calm down and he would kind of walk away and disassociate himself from some of the extreme elements in politics and try to roll up his sleeves and work in a bipartisan way to get things done,” he said. “But that hasn’t been the case. So there’s a lot of uncertainty about what’s going to come next.

As evidence, he points to Trump’s insistence on building a wall on the U.S.-Mexico border and undoing Wall Street regulations.

“I talk to Republicans here and in Congress and a lot of them privately will tell you they are very troubled by the actions coming out of the White House, but they are looking at poll numbers and among Republicans Trump is still very, very popular. They fear that if they take him on there’ll be a primary challenge and Trump will come and campaign against them and they’ll lose.

“I think they think it’s fine, that chaos helps them,” he said. “The day before he unleashed about President Obama we were all talking about how his attorney general [Jeff Sessions, the former Republican U.S. senator from Alabama] perjured himself before a Senate confirmation committee during the hearings on him becoming attorney general.”

As for the continuing controversy surrounding Russian involvement in the presidential election, McGovern said, “It’s an attack on our democracy and people should be outraged.”

“I think there needs to be an independent counsel, or there needs to be an independent commission. I don’t trust the attorney general to do this. He said he’d recuse himself, but I don’t trust him to have any direct involvement in this. The Senate and House intelligence committees are looking into this, but the trouble with intelligence committee investigations is that they’re all secret.”

Although there are signs that Trump will not roll back LGBTQ rights, McGovern said that situation deserves attention. In general, he said he is concerned with civil and human rights issues and how they will play out during this presidency.

Some of the most critical battles, he predicted, will be in the states with referendum elections and local political contests.

McGovern also said he is keeping an eye on immigrant communities in Massachusetts who come from places such as Bosnia where citizens don’t have a great trust in government and might be reluctant to access available services as a result.

“This is a particularly difficult time,” he said. “I have a tough time trusting the current president of the United States. It’s hard to separate what is real and what is not with this man. I do believe it erodes trust in government. It’s important to restore that trust.”