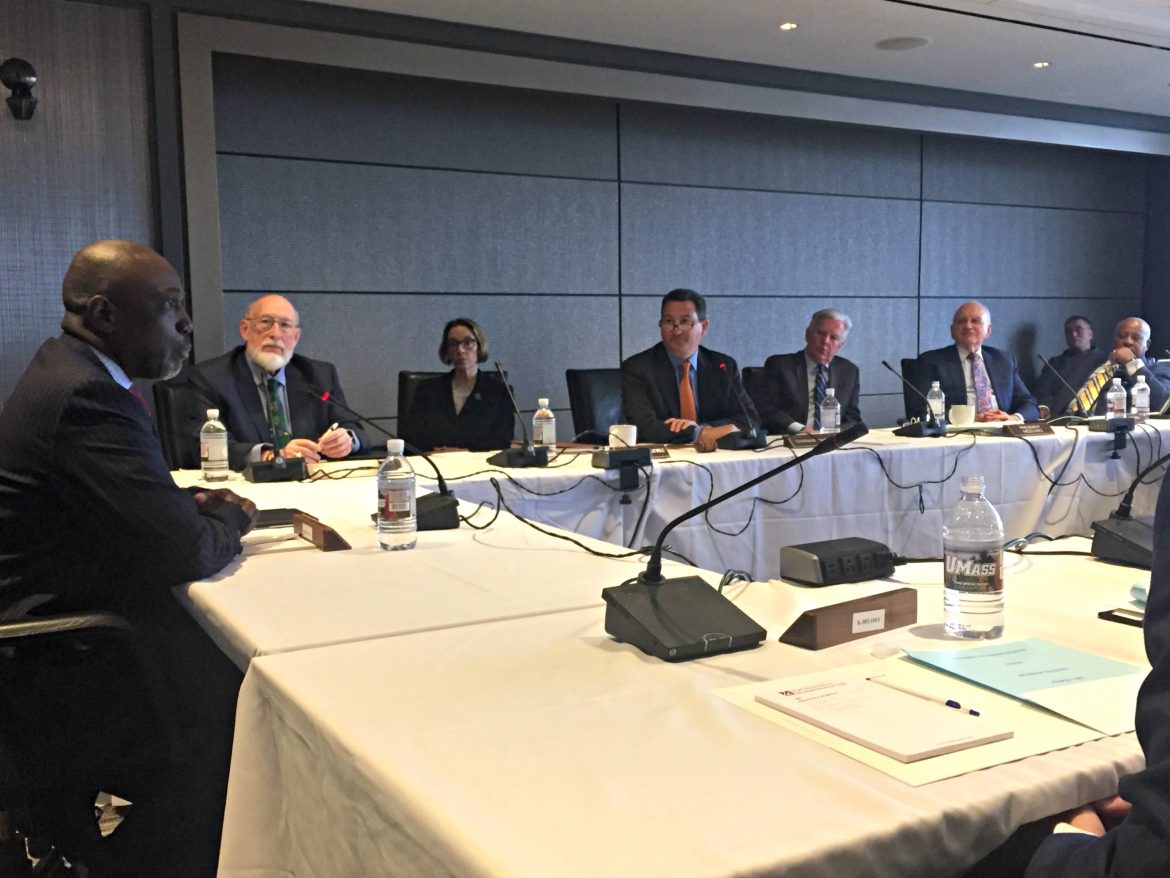 Robert Johnson, left, speaks to the UMass Board of Trustees March 7 after a unanimous vote to appoint him as chancellor of UMass-Dartmouth.

BOSTON — Robert E. Johnson, the president of Becker College, whose main campus is in Worcester, was approved Tuesday as the next chancellor of the University of Massachusetts-Dartmouth.

Johnson, a member of the state Board of Higher Education and vice chairman of the Massachusetts Technology Collaborative Board, has been president at Becker since 2010. A Detroit native, Johnson has served in administrative roles at Sinclair Community College in Dayton, Ohio; the University of Dayton; Oakland University and Central State University in Wilberforce, Ohio.

UMass President Martin Meehan, who recommended Johnson to the full UMass Board of Trustees, said Johnson is a “change agent” who has the ability to inspire the Dartmouth campus.

“Robert Johnson is a dynamic leader who, through hard work and collaboration, has transformed Becker College into a national leader on several fronts,” said Timothy P. Murray, President and CEO of the Worcester Regional Chamber of Commerce.

“Robert’s brand of can do leadership has had a profound and positive impact on Worcester and Central Massachusetts – including as chair of the Worcester Regional Chamber of Commerce board of directors,” Murray added. “While he will be missed, I know he will be an incredible asset for UMass-Dartmouth, its students and faculty, and the entire South Coast.”

At Becker, Johnson “elevated the reputation of that university” and became “deeply ingrained in the Worcester region’s business and civic community,” Meehan said.

After Meehan’s recommendation, the board voted unanimously to appoint Johnson as chancellor.

“This is an honor for me for a number of reasons, most importantly my dad. When I was a young boy, he used to talk about the University of Massachusetts,” Johnson told the UMass Board of Trustees. “And the greatest joy in my life was when I called him last night and told him I was coming here.”

UMass-Dartmouth, the best is yet to come. It’s possible,” he added. “Any organization, any entity out there, that thinks that we’re not going to step up to the plate and make a difference on the South Coast, well, I’ve got news for you. It’s possible. We’re going to do great things down there with the help of everybody.”

“Under Dr. Johnson’s leadership, Becker College has grown, thrived, and proven itself as an institution that has realized exceptional outcomes,” said Arthur P. “Jay” DiGeronimo, Jr., chair of Becker’s Board of Trustees. “Dr. Johnson’s future-oriented leadership, energy, and full embrace of his office have inspired the entire Board of Trustees, and the entire Becker community, and have made the charge of helping ensure Becker’s future an exciting one. We thank him for his exceptional commitment and service to Becker College and congratulate him on this wonderful new opportunity to lead a world-class institution.”

Board Chairman Robert Manning said Dartmouth is “the campus that has not had resources invested” and said once Johnson is in place and the campus has a strategic plan, the board will be asked to invest in the Dartmouth campus.

“Part of the problem is an enrollment issue,” Manning said. “It’s hard to attract students when you’re competing and your physical plant is not in the condition we need it to be in.”

While enrollment across the five-campus University of Massachusetts system shot up 27 percent over the past decade, the trend has differed at UMass-Dartmouth.

Systemwide enrollment surpassed the 74,000 mark for the first time in 2016, and university officials have described their system as “one of the fastest-growing universities, public or private, in the nation.”

At UMass-Dartmouth, enrollment has decreased each of the last two years, leaving the school with slightly fewer students last fall — 8,716 — than in the fall of 2006, when enrollment stood at 8,756.

“UMass Dartmouth is to be commended for their brilliant selection of Robert Johnson as Chancellor,” said Laurie A. Leshin, President of Worcester Polytechnic Institute.  “Since my arrival at WPI, Chancellor-designate Johnson has been my close colleague and I can personally attest to his vision, commitment, and capability to advance an institution during a time of transformational change in higher education. Although I will miss him as my neighborly collaborator, I’m so pleased we will keep his great talent in our Commonwealth.”

“As a transformational leader, Robert Johnson has proved a tremendous asset to our region, and I congratulate him on his new position,” said Mark Fuller, Vice President of Risk Strategies Company and Chairman of the George F. and Sybil H. Fuller Foundation. “I expect that UMass-Dartmouth, the University of Massachusetts, and the South Coast region will reap the many rewards of his able leadership.”

“While I am sad to see our president, my mentor, and friend leave Becker College, I could not be happier for Robert Johnson,” Crimmin said. “Dr. Johnson and I are working together to ensure a smooth transition of leadership, and I feel confident in the succession plan that is now in motion.”