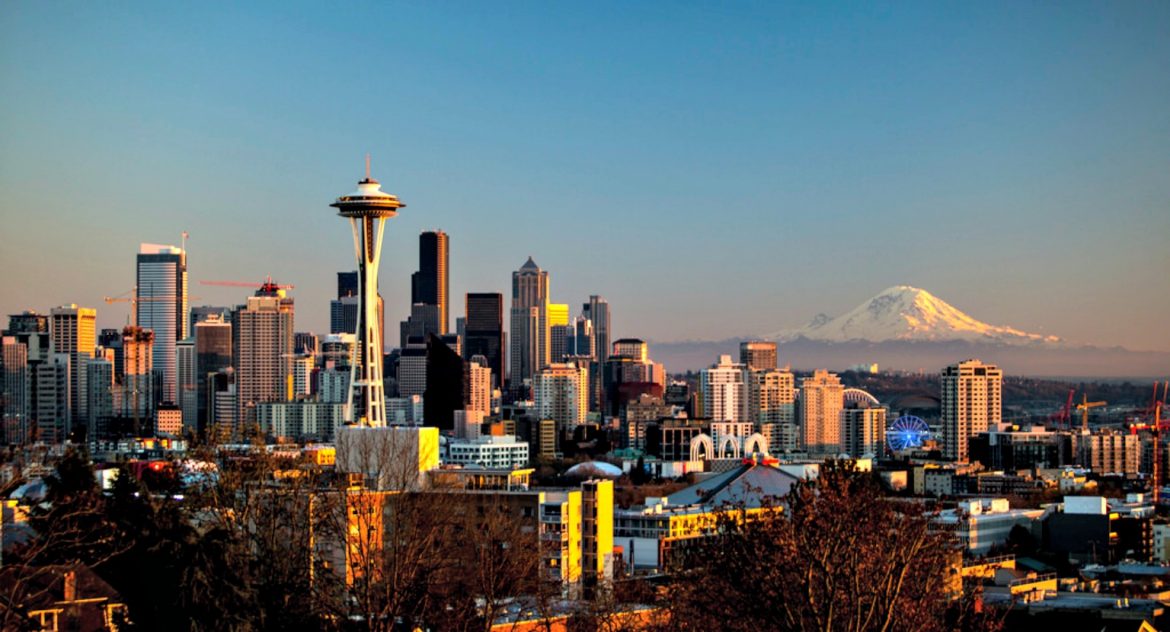 They say Massachusetts is the bluest state, but Washington can’t be far behind.

While I haven’t yet perfected my Liberal-O-Meter, preliminary readings from the prototype recently were of a magnitude never yet recorded.

The first signals were received shortly after we left Seattle-Tacoma International Airport and saw the first of many billboards touting the best cannabis in town. Smaller versions of these ads can be found in various publications, such as Seattle Weekly, the Feb. 22 issue of which carried a back-cover ad for Dutchy (“Fine cannabis. Pass it to the left.”)

Based on limited research — a couple hours of walking around the University District, downtown and Pioneer Square neighborhoods — it appears impossible to go more than one block in any direction in Seattle without seeing a poster, sign or handbill urging solidarity against the fascist dictator now occupying the White House.

Many restaurants and retail shops display posters declaring they are “no place for hate” and that refugees and immigrants are welcome. Such posters are common in parts of Massachusetts, as well, but in Seattle they are ubiquitous and inescapable.

I was even offered a bumper sticker urging the immediate impeachment of the aforementioned fascist dictator. I declined, since my car’s bumper is no place for hate.

Even on Vashon Island, 20 minutes from Seattle by ferry, there is little doubt that the Evergreen State is a very deep shade of blue.

On Feb. 23, after authorities had removed the last of the Dakota Pipeline protesters from their camp at the Standing Rock Reservation in the Dakotas, two locals set up on the street corner in the center of town to lament the news of the day. They even threw in a “Free Palestine” sign.

While it is true that Republicans enjoy a tenuous control of the state Senate, Democrats control the state House of Representatives, and the last Republican to govern the state, John D. Spellman, left office on Jan. 16, 1985. Washington hasn’t backed a Republican for president since Ronald Reagan.

The left might consider that perhaps they don’t have all the answers for society’s ills after all.

There are no state personal income taxes or corporate income taxes, per se, but Washington compensates with a 6.5 percent sales tax, which soars to 9.5 percent in Seattle and other urban areas. Commercial interests are hit with both a business and occupation tax and a gross receipts tax. And the state’s gasoline tax, at 49.4 cents per gallon, is second only to Pennsylvania.

If you’re politically liberal, this amounts to something close to paradise, particularly given the fine coffee, superb bookstores and natural beauty of the Pacific Northwest.

That bargain rests in part on the continued cooperation of Mother Nature.

Mount Rainier is a majestic site, and apparently sleeping, but it’s also among the world’s most dangerous volcanoes, perfectly capable of sending a stunning volume of lava, rock, ash and superheated mud into South Seattle or beyond. And any sudden movement of the Juan de Fuca Plate, which is subducting beneath the North American Plate, could create the ultimate sleepless in Seattle scenario.

When Seattle Mayor Ed Murray delivered his state of the city address Feb. 21 — from a mosque — he vowed to fight the now thrice-referenced fascist dictator, to protect refugees and immigrants, and to push for $275 million in new taxes over the next five years to combat homelessness.

Indeed, peer beneath the I-5 overpasses, and you find veritable tent cities, complete with propane tanks, curtains, partitions, and piles of trash. It’s a jarring sight in a city with 4 percent unemployment and tens of thousands of new jobs in recent years.

I’m not blaming Mayor Murray or Seattle’s liberalism for the city’s obvious problem with homelessness, but the left might consider that perhaps they don’t have all the answers for society’s ills after all.

For the real threat of division in Seattle, the only thing that could mark a true splitting away from the American mainland, is ideological. It’s the insistence on the part of those on the far political left that it is not enough to score political victories, but that one’s political and ideological opponents must be discredited, defamed and destroyed.

Just remember that communities are inclusive by definition, and belong not just to those who share the ideology that happens to be in fashion today. The enemy is not the right or the left, but those who cannot tolerate the existence of both.