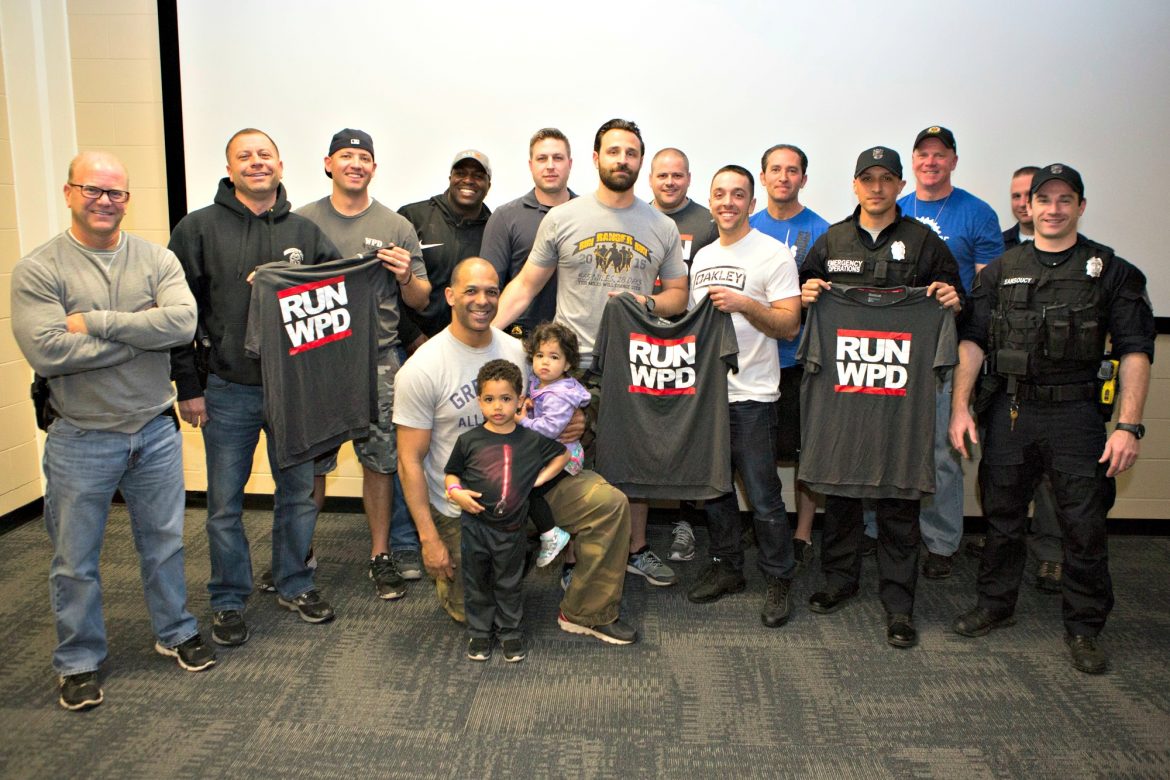 A group of Worcester law enforcement officers are "Bound for D.C." to raise money for the Boys & Girls Club.

From the Heart of the Commonwealth to the nation’s capital, 13 Worcester Police officers (sometimes 14) and one sheriff’s deputy will be lacing up their running shoes to jog 460 miles together over the course of four days, with a single, unified goal: to raise money for the Boys & Girls Club of Worcester’s track and field program.

Beginning May 9, city law enforcement officers — led by WPD gang unit Officer Brian Piskator and vice squad Officer Nathan Reando — will run about 10 to 12 miles a day starting at City Hall and arriving at the Law Enforcement Memorial in Washington, D.C., on May 13. Sunday, May 14, kicks off National Police Week.

The route from Worcester to Washington, D.C., is being scouted by map right now, but a “driving recon” will be done by car before May 9, according to Piskator.

“The way it looks like right now it will be 10 to 15 miles per day for each runner. However, that’s going to be dependent on injury and condition. If one person goes down the first day and rolls their ankle, that’s going to bump everyone else up to 16 or 17 miles a day,” he said.

“The Worcester Police Department is one of our greatest supporters and they knew we would need financial support to have staff and equipment for [track and field] programming that we’ve never been able to provide our kids before,” Boys & Girls Club of Worcester executive director Liz Hamilton told the Sun recently.

The Worcester Police Department is active with the Boys & Girls Club of Worcester through the Worcester Police Athletic League [PAL] boxing and basketball programs and Gang Awareness Next Generation [G.A.N.G.] summer program. This new effort is to get the track and field program out of its infancy stages and turn it into a permanent year-round activity.

“Our line of thinking is this: ‘If it’s not us, then who’s going to do it?’ That’s really our mindset,” Piskator said. “That’s not to say that someone else couldn’t do it, but we have the opportunity do it, so why wouldn’t we? In our line of work, you can see how easy it is for a kid to take a wrong turn, rather than a right one.” 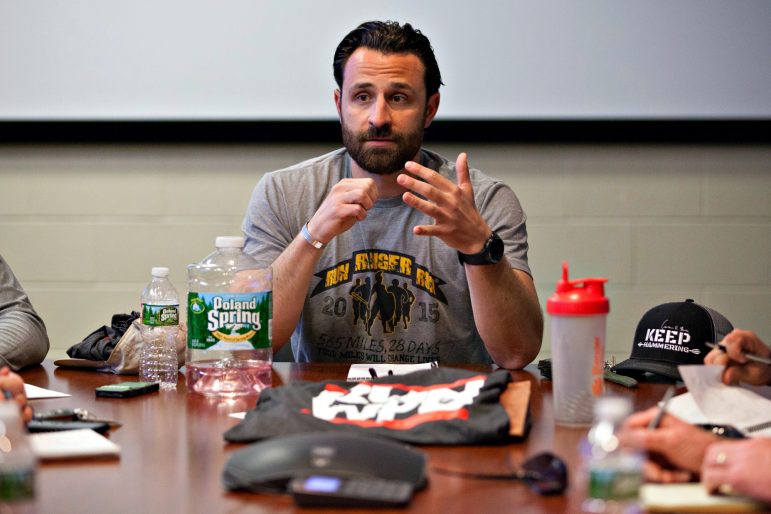 Officer Brian Piskator leads a meeting of the runners ahead of their 460-mile trip.

WPD officers “were really excited that we would have programming for our kids that would allow the kids to be exposed to outdoor athletic opportunities,” Hamilton said. “We need the funding to have programs to utilize the entire field.”

Piskator said, “It’s great to be able to help [kids] with the right choice between the hours when school’s out and when they have to go home.”

Last fall, with the addition of Clark University’s $3 million track and field facility built next to the flagship Tainter Street clubhouse, the opportunity to expand the club’s athletic program to soccer, rugby, flag football and, of course, track and field, presented itself and allowed WPD volunteers a chance to broaden their involvement.

“We’ve never been able to have that open space to provide our kids and a lot of our kids don’t have that opportunity to be able to just run around in a beautiful open space,” Hamilton said.

With a $25 annual membership fee, the Boys & Girls Club is left to raise $2.5 million a year to keep its doors open and be able to provide programs and services to those kids, Hamilton said.

“It wasn’t in their budget to fund any track or running programs,” Piskator said. “So, myself and [Reando] put our heads together and decided we needed to start fundraising to essentially build a track and field program here.”

“From their staff, their programs and everything they have to offer, it’s top notch. And that’s why our goal is to support them, and they in turn can get to these inner-city kids, and so it’s a win-win for us,” Reando said. 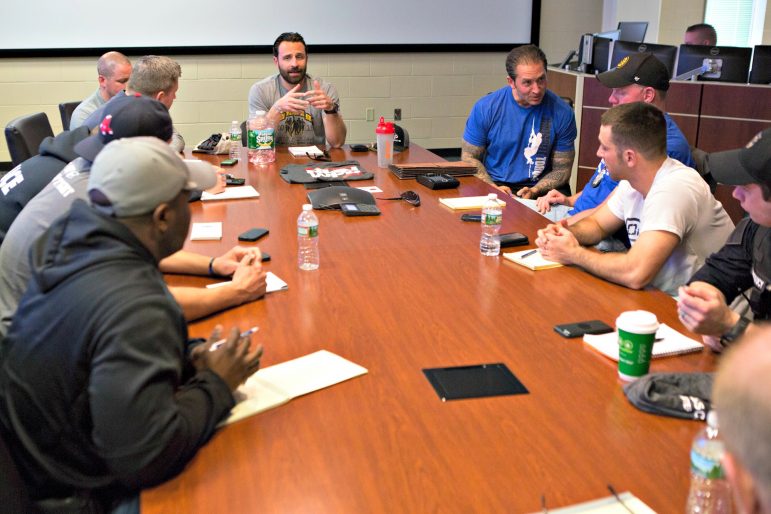 Piskator, 31, of Tatnuck Square and a graduate of Doherty Memorial High School, is a U.S. Army veteran and has been with the WPD for eight years. He is also a former member of the city’s Boys & Girls Club.

“I’ve been part of the program, and now I’m in a position where I can help out,” he said.

Reando, 43, is a graduate of Burncoat High School and Curry College and a Desert Storm veteran of the U.S. Air Force. He’s been with the WPD for 21 years and is a co-owner of Crossfit CenterMass on Shrewsbury Street.

Reando initially got involved with the clubs 15 years ago as a member of the WPD gang unit when he helped create the boxing program. As founder of “Give Kids a Fighting Chance,” Reando has helped that program raise over $900,000 for the city Boys & Girls Club.

“Since the beginning, I’ve always loved the Boys & Girls Club. I think it’s one of the best places in Worcester for inner-city kids,” Reando said. “My thing from when I was in the gang unit, and still is, is that I always thought the key to prevention is surrounding kids with positive people and positive places.”

Reando and Piskator hosted the Worcester City View 5K on March 26 on Shrewsbury Street to launch their fundraising efforts. By soliciting entries from runners, accepting donations from local businesses, and with other WPD officers volunteering their time to provide details for the race and block the roads, the event raised nearly $20,000 — enough to fund the Boys & Girls Club track and field program for one year and hire a part-time coach.

Money raised through the Bound for D.C. fundraiser will be used to purchase uniforms and equipment and to fund the program beyond the first year.

According to Piskator, the idea to run from Worcester to Washington came from the Woonsocket, Rhode Island, Police Department’s “CopsWalk” — a roughly 450-mile walk to Washington, D.C., to raise funds for Concerns of Police Survivors (COPS), a nonprofit group raising money for programs for surviving family members and coworkers of fallen police officers.

“They’re a great organization and we are going to combine our efforts and hopefully meet them out there on their way to D.C.,” Piskator said. The WPD Bound for D.C. group has yet to determine what time it will leave on the morning of May 9 [either 9 or 10 a.m.], in order to time their run to meet with the Woonsocket officers along the way in Connecticut. 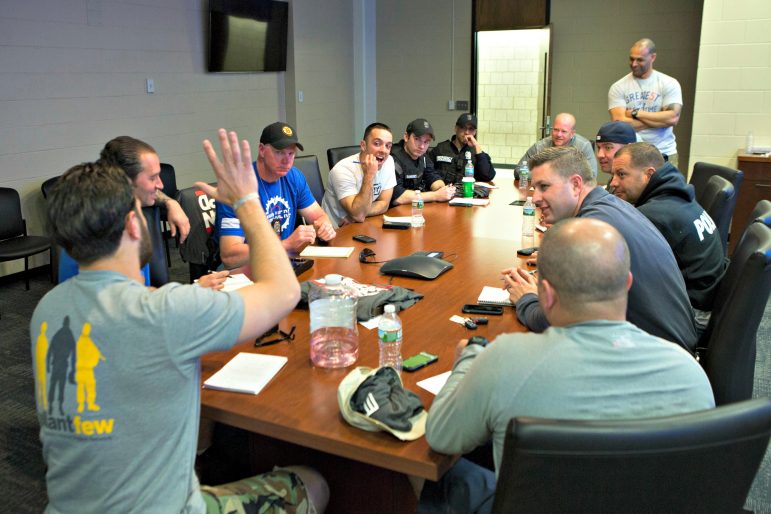 Worcester Police Chief Steven M. Sargent will join his officers for short intervals along the route.  He “obviously can’t be out of the city [for four days], but he is running with us to motivate us,” Piskator said.

Dan Melhouse, a Worcester County Sheriff’s deputy, will be joining the WPD runners.

With the help of their running coach Tim Ritchie of Worcester — a 2005 graduate of Doherty, Boston College alum and assistant coach with BC’s men’s cross country team — the group is running together at the Boys & Girls Club each Monday and Wednesday evening.

The officers run a few laps on the track with the kids from the club before they go out on a long run to train as a team.  Depending on what the training plan calls for, the amount of miles the officers run each day varies.

“We’re building up so there will be a culminating mileage where all the guys are able to do 10 miles a couple days in a row and have a strong base to get out there,” Piskator said. “Our goal is to stay healthy and maintain a good pace throughout. And, of course, try to stay up on our social media so everyone can watch us and track us.”

With 14 men running together over the course of four long days, Reando knows that to prepare mentally for the race, it’s going to take a good sense of humor and the ability to have some fun along the way.

“All the guys that we are running with are really good guys. There’s a lot of different personalities, but they’re all fun and they’re all bringing something to the table individually. That makes it much more interesting event and journey,” Reando said.

“We’re bringing a set of boxing gloves on the trip just in case we get on each other’s nerves,” Reando joked. “We’ll spar a few rounds and get it out of our system and then go run a few more miles.”

The WPD: Bound for D.C. runners can be followed on Facebook and donations to support the Boys and Girls Club of Worcester can be made at Crowdrise.com.