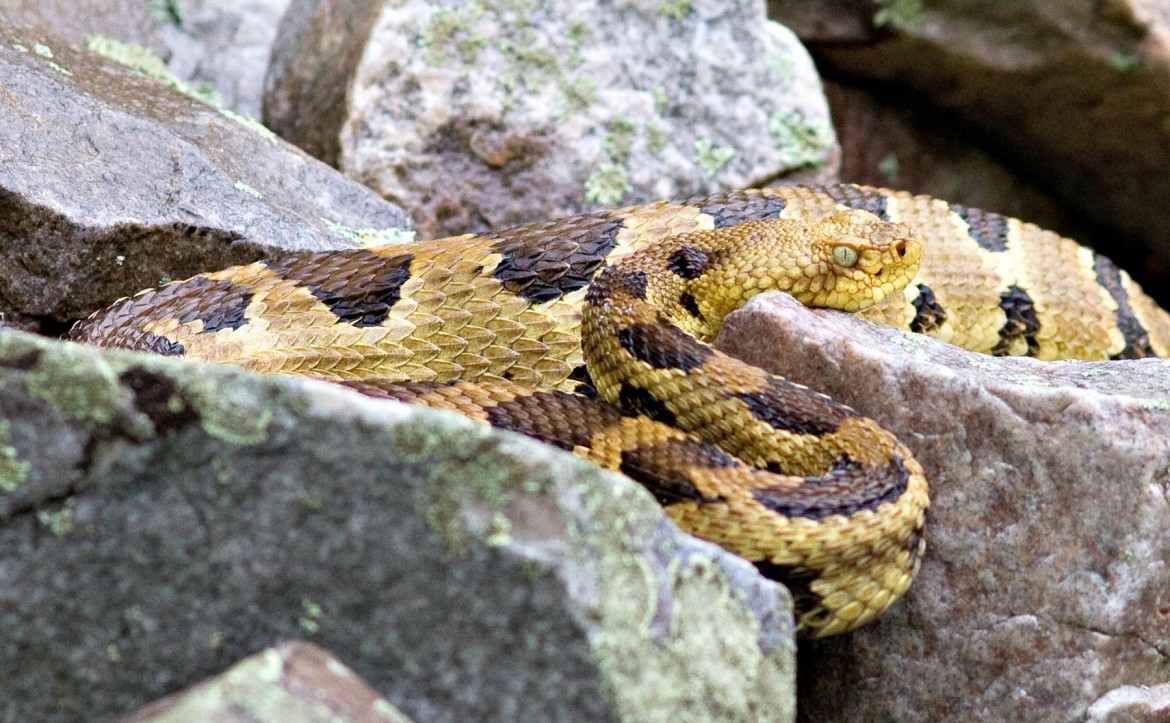 Timber rattlesnakes should be more worried about us than we are of them -- so why is it the other way around?

In cities around the world yesterday, people marched and held rallies in favor of science.

That’s a great show of support for reason, facts, discovery, and looking the world squarely in the eye.

Locally, though, science seems to have lost out to fear in the matter of Quabbin Reservoir’s would-be new residents, the timber rattlesnake.

The endangered [in Massachusetts and six other states] species won’t be slithering around a secluded Quabbin location in search of chipmunks anytime soon. The state Division of Fisheries and Wildlife last week shelved its idea to introduce the snakes — which are venomous but rarely harmful to humans — to Mount Zion Island in the reservoir, after more than a year of trying to persuade Quabbin-area communities of the proposal’s safety and ecological value.

State wildlife officials wanted to provide the snakes a sizeable territory where they could live and breed securely, well away from contact with people. They thought they had found the solution in Mount Zion Island, a restricted-access peninsula in the middle of the reservoir.

We would have liked the public to consider, learn about, and ultimately accept the idea of allowing a timber rattlesnake population to establish in that isolated Quabbin spot. What is perhaps most dismaying was the hands-down dismissal of the plan by some vocal opponents.

Science, in contrast, is more of a listener — beginning with Mother Nature.

Scientists and environmental enthusiasts embrace observation and understanding, deeply respect the environment and its need for diversity and balance, and enjoy the complexities of questions that arise from their work — such as whether and how to help a once-thriving rattlesnake species that is dramatically dwindling in numbers in Massachusetts and elsewhere.

Rattlesnakes as a group may be a little hard to love. They make a uniquely scary noise and have the bite to go with it. But timber rattlesnakes, experts avow, are reserved by nature and passive to people.

Further, in matters such as this, we have learned to trust in experts’ careful field observations and in the rich intricacies of nature, far more than the knee-jerk or fearful reactions of the uninformed.

Unfortunately, in today’s world, love and appreciation for science — as well as trust in those who have made science their life’s passion and work — can be in short supply.

While this relatively minor matter — the idea of introducing timber rattlesnakes to Mount Zion Island — is kaput at least for the near future, we hope large-scale events such as the marches and rallies for science yesterday (the idea for which stemmed from the post-inauguration Women’s March January) will help turn the tide toward greater respect for and grounding in science. Science and our attitude toward it affect how well our own species thrives here in the wilds of our planet.

Nature is easy to love, but on a global scale in the modern age, it’s not so easy to take care of.

It doesn’t help that some large-scale issues that matter directly to humans meet with persistent obstinance or ignorance despite available, reliable science. That is particularly true of the topic of accelerated climate change, the seriousness and even existence of which is questioned in some quarters, including within the Trump administration. The disproved hypotheses of a link between vaccinations and autism is another example of prolonged wasted energies when important and fascinating scientific puzzles need facts, wisdom and cooperation.

We very much support Earth Day 2017’s massive attention to science. Hundreds of communities signed on to hold sister marches to yesterday’s first-time main event, the March for Science in Washington, D.C. Here in Worcester, local organizations collaborated to hold a rally at Institute Park.

But science, reason, and caring about the Earth and its creatures aren’t topics for a day or a weekend. They’re constants, part of the human effort to make sense of our surroundings and live well within them.

As for the rattlesnakes, we wish them better luck somewhere else.