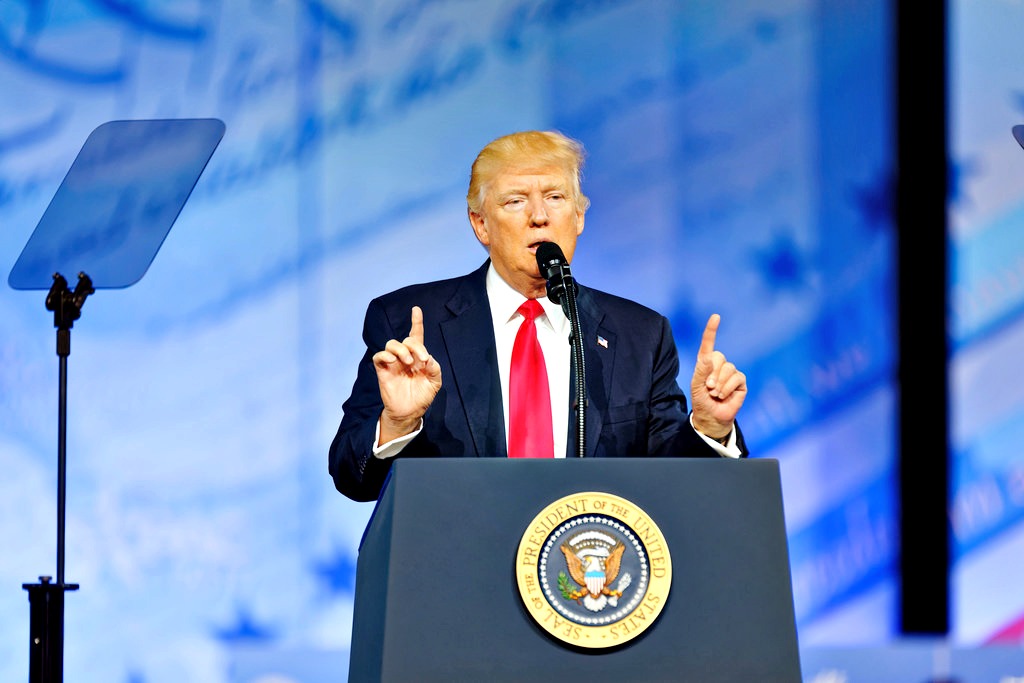 [YOUR TURN: What are your thoughts on the possible impeachment of President Trump? Vote in our poll at the end of Ray’s column or join the discussion on Facebook.]

With all of the serious and sometimes frightening things happening in Washington, D.C., it is hard to focus on what really matters. That is because President Trump’s behavior varies between boorish and mentally ill. We seem transfixed by his daily antics.

Many people want him out regardless of the consequences. We count the days that he has been in office as if they will soon end.

And we have people literally cheering for impeachment. Public Policy Polling recently released data showing that 44 percent of registered voters favor impeachment. Among the many anti-Trump websites, “Impeach Trump” already has about 1 million followers.

What are the chances that Trump will be impeached?

In my opinion, Donald Trump is a terrible president, a national embarrassment and an international laughingstock. But should he be impeached?

Keep in mind that impeachment must start in the U.S. House of Representatives.

Among the primary reasons cited as possible grounds for impeachment are:

1.) Violation of the Emoluments clause of the Constitution, Article 1, Section 9. This might include accepting payments from foreign governments at Trump hotels. The violation of this clause could also include China’s recent approval of 38 Trump trademarks. It is important to note that before he became president, over the past decade, Trump was consistently denied these trademark approvals.

2.) Colluding with Russian officials, Article 3, Section 3.  At least one member of the House Intelligence Committee has predicted that people connected to the Trump campaign will go to jail. But no one has cited evidence directly against Trump.

3.) Accusing President Obama of illegally wiretapping him. The President takes an oath to faithfully execute the laws and the Constitution. By accusing the former president of an illegal, impeachable act without any evidence, Trump may have violated his oath.

And then there’s the “What will he do next?” wild card. Who knows what Trump may do next month?

Allan J. Lichtman, a professor at American University, was one of only a very few prognosticators who predicted Trump’s victory in November. Lichtman, known as the “Prediction Professor,” has successfully predicted every presidential election since 1984.

Now Lichtman has made a second prediction: that Trump will be impeached before his time in office ends. And he wrote an entire book on the subject, “The Case for Impeachment.”

In an interview with The Washington Post, Lichtman acknowledged that talk of impeachment might be premature, but said: “Yet, given our new president’s disdain for constitutional checks and balances, the investigations already underway, and the turmoil knifing through this White House, it doesn’t seem entirely unrealistic, either.”

With all due respect to Professor Lichtman, at this point, I would say that it is highly unlikely that a Republican-controlled House of Representatives would vote to impeach Trump. For an impeachment resolution to pass, all 193 Democrats plus 23 Republicans must vote for impeachment.

What would happen if the House tried to impeach Trump?

When Bill Clinton was impeached by the House, many of his supporters were concerned. However, given the gravity of the matter, things remained relatively calm. I remember being at the White House during that time and asking President Clinton about it. He seemed tired, which was understandable. However, he assured me that things would be fine.

If the House ever tried to impeach Trump, it would be very different – there would be chaos. Trump’s approval rating may be historically low, but people who support him are zealous in their defense of the president.

Impeachment proceedings can be brought by a member of the House of Representatives on his or her own initiative, either by presenting a list of charges under oath, or by asking for referral to the appropriate committee, which is generally the Judiciary Committee. The committee would then hold public hearings, call witnesses and gather evidence.

The pressure on members of the Judiciary Committee would likely be unprecedented. Both sides would marshal their forces. There would be public protests. Members of Congress would be confronted by the public every time they stepped out of their offices. I imagine that there would be threats and ugly language and behavior beyond what we have seen thus far.

And I would expect that there would be violence – protesters clashing outside the White House or at some of the town hall meetings that would be held.

If history is any judge, this process would likely take months. During that time, virtually nothing else in Washington would get done.

To date, no member of Congress has pushed the impeachment button, although California congresswoman Maxine Waters said in March, “Get ready for impeachment.”

Get ready for impeachment.

Also remember that, if the House voted for impeachment, it is then referred to the U.S. Senate for a vote. Two-thirds, or 67 senators, must vote for removal or the resolution will fail. That means that all 48 Democrats and Independents plus 19 Republican senators would need to vote for removal. That is highly unlikely.

So what would happen if Trump was impeached and removed from office?

Think about it. If President Trump becomes citizen Trump or even convict Trump, we then get President Pence. And, to use one of Trump’s favorite phrases, that would really be “a total disaster.”

With a Republican-controlled House and Senate, Pence, who is far more rigidly conservative, would be able to roll back so many of the rights that we have won over the past few decades.

Trump is an opportunist. He is looking for a win, something he can boast about. Trump would work with anyone and support any side of an issue if he thought it would make him look good. In a single day (April 12, 2017), Trump reversed or walked back six different positions he took during the campaign.

Pence is an ideologue. He wants to remove LGBTQ rights, and roll back women’s and workers’ rights. And Pence is experienced enough and dogmatic enough to do it.

As far as being president, Vice President Pence looks the part. He conducts himself like a gentleman. He does not call people names or tweet bizarre accusations. But do not let his look and manner fool you.

If Pence were to become president, he would lead the Republican army on a scorched-earth assault on our rights, our environment and the poor that would make General Grant’s march on Richmond during the Civil War seem like a Sunday stroll.

Pence has opposed marriage equality and equal rights. In 2006, he called being gay “a choice” and said that gay couples signaled “societal collapse.” In 2007, he opposed a law prohibiting discrimination against LGBTQ people.

As governor of Indiana, he tried to stop the resettlement of Syrian refugees in his state. And he tried to create his own news bureau to assist in the production of “news stories” that drew comparisons to government-backed news outlets in communist countries.

Pence has also supported legislation to limit a woman’s right to choose and tried to defund Planned Parenthood.

A President Pence would be a national nightmare of such a magnitude that we might never wake up.

What is the best course of action going forward?

Look at it this way. Right now, Trump is fighting with members of his own party. The ongoing Russian investigations and other bizarre behavior have weakened him. His approval rating is in the cellar. On both foreign and domestic policy, some Republicans are starting to break ranks.

For those of us who get up every morning worried that Trump is leading our great nation into a hole so deep it will take years to find our way back out, we need to focus on the issues and causes that will bring us back to sanity.

We need to continue the resistance that began shortly after his Inauguration with the Women’s March and continued through the countless town hall meetings that have occurred over the past few months.

And we need to focus on taking back the Congress in 2018.

While most experts consider it a long shot, if the Democrats took back even one house of Congress, we would be able to halt the assault on our democracy. An erratic and personally offensive President Trump in 2018 is far more desirable to have as an opponent to fire up the troops than a calm, respectable President Pence.

The controversies on the table now guarantee that there will be investigations, hearings and perhaps discussions about possible impeachment for many months to come. Trump’s long history of bizarre behavior guarantees that he will say and do things that will only add fuel to that fire.

18 thoughts on “Mariano: What happens if Trump gets impeached?”