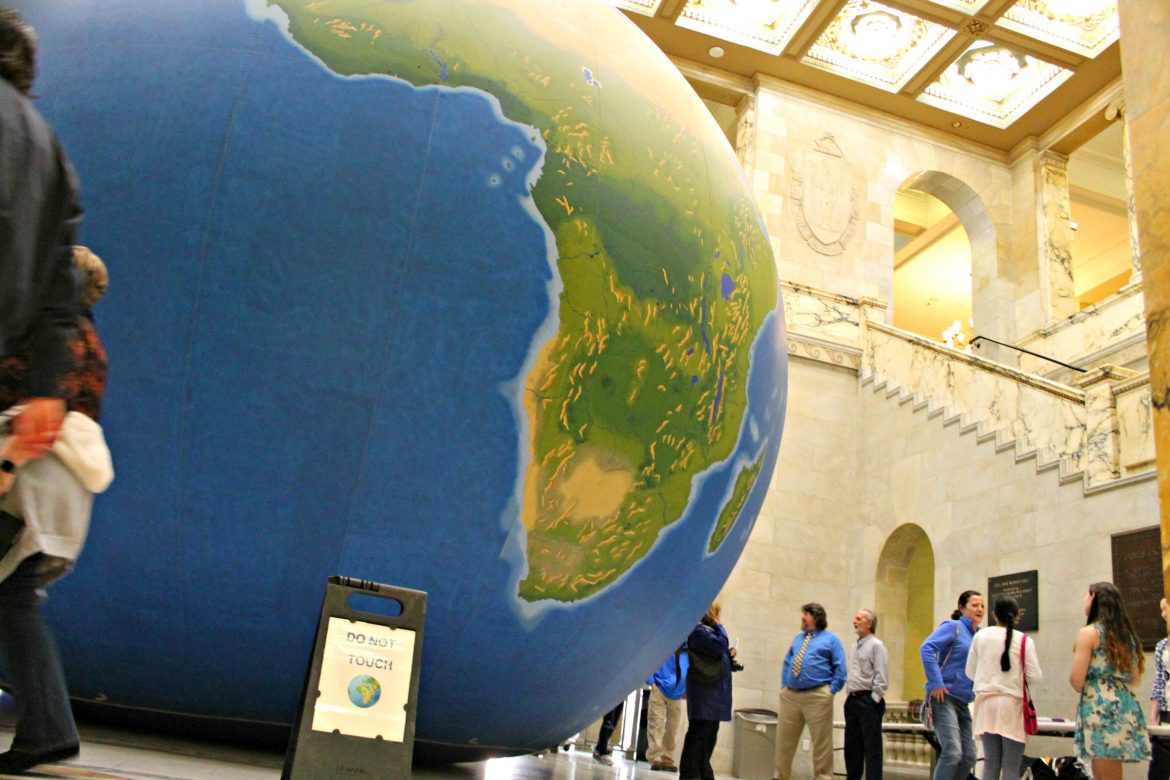 A crew from Bridgewater State University's Project EarthView inflated a 20-foot globe in Nurses Hall last week. Young children at the State House in the middle of school vacation week were able to climb inside the hand-painted sphere, which contains a "two-story, portable classroom" with a behind-the-scenes look at Earth's land masses. EarthView, an effort of Bridgewater State's Geography Department and Center for the Advancement of STEM Education (CASE), travels to schools and youth programs in Southeast Massachusetts.

Schools broke for April vacation, but midterm grades started to come out this week and had to leave Gov. Charlie Baker wondering what a guy needs to do to get an A.

It seems everyone in Massachusetts is a tough grader, the governor included.

It probably did not shock the governor or his team when, for the second straight year, a coalition of environmental advocacy groups gave Baker a “mediocre” grade of C for 2016.

Despite solid marks for energy efficiency and electric vehicle promotion, environmental activists have been unimpressed with the progress Baker has made toward a campaign promise to boost funding in the state budget for environmental issues.

The governor’s fiscal 2018 budget proposal actually backslides from the target of 1 percent of total spending, and the governor’s support for natural gas pipelines has not endeared him to those in the green community.

So he got one C grade. But surely, the governor’s performance would be looked at more kindly by the woman with whom he shares a home? Apparently not.

First Lady Lauren Baker, it would seem, was equally unimpressed by her husband’s recent 75 percent approval rating in a Morning Consult poll, which made him once again the most popular governor in America, now more than two full years into his first term.

“Congratulations. You got a C,” the first lady reportedly told her husband. Ouch.

All of that tough love must have rubbed off on the governor who, when asked this week to grade his own administration’s performance with the MBTA, handed down a grade of …. C+.

“I would argue that that’s because a big part of the investment that we are going to be making over the next several years in the core system is just getting started,” he said. Baker gave his team an A- for organizational improvements at the T.

Just days after being acquitted of a separate double homicide, Hernandez was found dead in his Souza Baranowski Correctional Center cell in Shirley where he hanged himself using a bedsheet. Leaving aside the question of why Hernandez took his own life, Gov. Baker said he would wait to form judgements on how it was allowed to happen until after the full investigation.

“Anytime anybody kills [themselves] in a prison, something clearly went wrong,” Baker said, nevertheless extending his “full faith and confidence” in state Correction Commissioner Thomas Turco.

[Watch video of Baker’s comments on Hernandez below.]

The Hernandez suicide rocked an otherwise sleepy news week as Beacon Hill slipped into its pre-budget debate slumber, and marathon runners gave Bostonians something to cheer for as summer temperatures briefly warmed the Patriot’s Day holiday.

Massachusetts Department of Revenue Commissioner Michael Heffernan notified senior state legislators about the numbers in a letter Thursday, cautioning that it “would not be advisable to use this data to predict trends” in part because tax-filing season activity peaks after the mid-month period.

Doug Howgate, director of policy and research at the Massachusetts Taxpayers Foundation, also cautioned against drawing conclusions based on mid-month data. “Certainly you’d rather be doing well than not doing well,” he said.

Tax revenue was streaming in earlier this month.

April is the single biggest month of the year for tax collections, so it’s being watched closely by the Baker administration and state lawmakers who are in the midst of planning for fiscal 2018, when budgeted state spending is expected to surpass the $40 billion mark for the first time in history.

In each of the last five years, the state has collected more in taxes during April than any other month. Payments made with returns are concentrated in April, which features the annual tax-filing deadline, and the year’s first round of estimated payments from individuals are due in April, Heffernan said.

Tax collections for fiscal 2017 were running $220 million behind spending benchmarks through March. Midyear spending reports are not available and Gov. Baker’s team has not publicly outlined details of steps they are taking to bring spending in line with revenues as the fiscal year winds to a close.

Accounting for the early April bump, tax collections over the first nine-plus months of fiscal 2017 are up by 2.8 percent over the same period in fiscal 2016. The fiscal 2018 budget, which the House plans to debate during sessions this week, is predicated on tax collections increasing by 3.9 percent.

Withholding collections, which are closely monitored because they reflect current labor conditions, totaled $561 million over the first half of April, up $106 million, or 23 percent, from mid-month April 2016. Fiscal year-to-date withholding collections are up 5.1 percent.

With more than 1,200 amendments to consider, House readies for budget season

Hampered by months of lagging revenue growth, House lawmakers this week will likely turn down major proposals to boost state spending and stick with the latest in a string of austerity budgets that target new investments while plowing the lion’s share of new revenues into health insurance, public employee pensions, debt service and the MBTA.

The House gavels in tomorrow at 10 a.m. for “budget week,” a string of marathon sessions during which 1,210 amendments will be considered, largely through private back-and-forth among members.

If past practice holds, most amendments will be withdrawn or laid aside while aspects of others will be blended into large “consolidated” amendments and approved, often with bipartisan support. Debates and recorded votes may even break out, although representatives in recent years have opted more often to dispense with amendments more quietly.

Amendments totaling $2 billion in spending have been filed, according to the Massachusetts Taxpayers Foundation, which noted last year only $58 million was added to the House budget through floor amendments.

Polito honors National Teacher of the Year from Boston

.@SydneyChaffee is a gift to her students, her school and our Commonwealth. We are proud to share her with the nation. #NTOY17 pic.twitter.com/HEjV1ZIhok

Trump to nominate Scott Brown for ambassador to New Zealand

If Brown is confirmed by the U.S. Senate, his newest title will be Ambassador Extraordinary and Plenipotentiary of the United States of America to New Zealand, according to the White House.

The role is at least the second in the administration for which Brown, formerly of Wrentham, has been considered. He previously met with Trump to discuss the job of Veterans Affairs secretary.

Since leaving Massachusetts after losing his U.S. Senate seat to Elizabeth Warren in 2012, Brown has been a contributor to Fox News. He ran an unsuccessful campaign for a U.S. Senate seat from his new home in New Hampshire.

Like Trump, Brown scored his own shocking upset when, in 2009, he ran a special election campaign for the U.S. Senate that he was initially given little chance of winning. He instead surged to defeat then-Attorney General Martha Coakley.

NEWTON — Newton Housing Authority resident Bonnie Mojica saw her winter energy bills plummet from about $470 per month to between $140 and $170 after a heat pump was installed in her home three years ago.

Making available $10 million in new grants, Gov. Baker wants the state to explore other ways of extending the benefits of renewable energy and energy efficiency programs to Bay Staters who lack the means to shell out resources for the technology.

Standing on the street outside Mojica’s home in Newton, Baker said environmentally friendly home upgrades have been out of reach “unless, frankly, you had a lot of dough.” 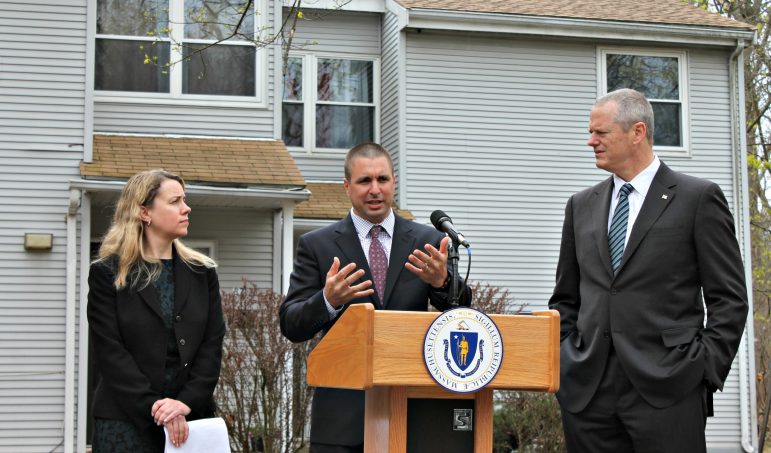 The initiative — which involved the collaboration of state housing and energy officials working in different secretariats — earned the administration praise from an environmental advocate who last week bestowed a middling C grade on the governor’s energy and environment efforts.

“This is an important step in the right direction,” Environmental League of Massachusetts President George Bachrach said in a statement. “Energy efficiency is the only way we can lower utility bills for families in the Commonwealth, and it’s far cheaper than more gas pipelines in dealing with energy capacity.”

The $10 million, which is expected to be distributed over the next year or so, will fund a variety of programs, including $400,000 for “zero-energy” prefabricated homes, $4 million for green public housing buildings, and $3 million for nonprofits that serve low-income residents.

State Department of Energy Resources Commissioner Judith Judson said some of the funds will finance renewable thermal energy in Department of Housing and Community Development properties, and the aim is to find what works best.

“These funds go towards demonstration projects,” Judson said. She said, “It really is to go towards how we can create programs and then make them sustainable for the future.”

The upgrade to Mojica’s home happened before Baker took office. Amy Zarechin, executive director of the Newton Housing Authority, said it was installed in 2014 with funding from the Massachusetts Clean Energy Center.

After announcing the new grants, Baker took a tour through Mojica’s home, asking about the cost and upkeep of the temperature-regulating unit. Told that the equipment costs several thousand dollars, Baker remarked, “That gets to the notion you have to have the dough to make the investment to get the benefit, and that’s why this kind of program is important.”