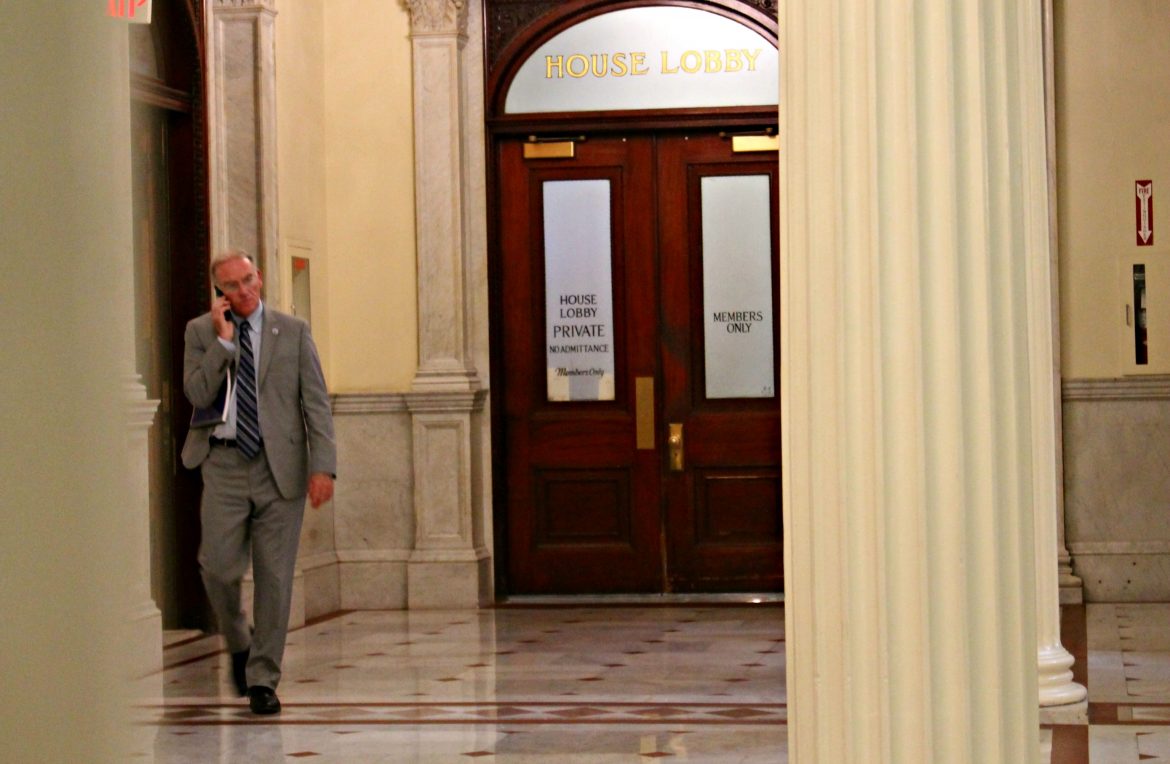 Freshman Rep. Brian Murray of Milford took a phone call outside the House Lobby early last week during the branch's first day of budget debate. Over the two-day affair, the shortest "budget week" in recent memory, most of the important debates and decisions occurred not on the House floor but in a nearby lounge where reps held meetings to decide which amendments were in and which were out.

House “budget week” — once as sure a rite of spring as Patriots Day and the marathon — became something altogether different this year, a slow evolution from a colorful and messy, sugar- and caffeine-fueled test of wills and endurance into something far more antiseptic.

And yet, the House achieved a notable milestone last week that had nothing to do with its pace-setting debate.

For the first time in the state’s history, a branch of the Legislature approved an annual budget north of $40 billion in spending, and with near unanimity to boot. The fact that it took just two days to accomplish such a feat only makes it more remarkable.

Rep. Brian Dempsey, the Rooseveltian wizard of Room 348 who oversees the behind-the-scenes blending that allowed the House to dispatch 1,210 amendments in nine bulk amendments and a scattering of individual votes, shepherded his seventh budget to completion.

Seldom seen or heard, the Ways and Means chairman’s style has become one that emphasizes ruthless efficiency. 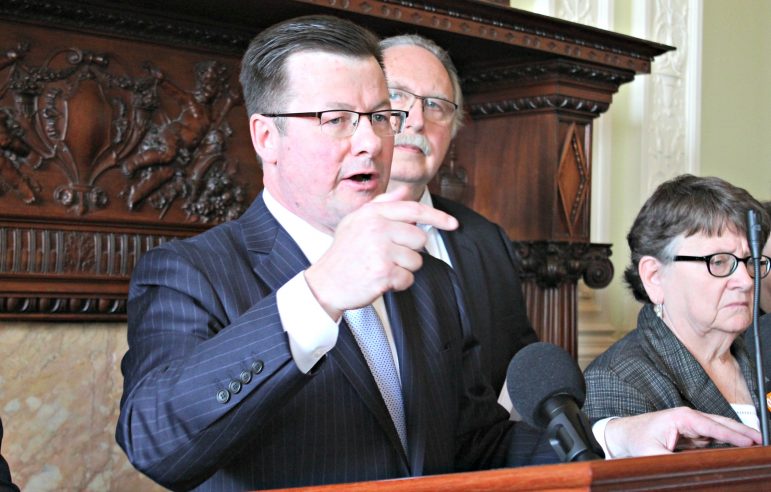 Budgets, politicians like to say, are value statements and a series of choices about where to allocate finite resources to achieve a goal, or many. But they’re also about basic math — making sure the revenue coming in matches the spending going out, and using whatever tricks of the trade are necessary to make that math work.

From the time the budget was introduced on Monday to the moment when the applause for Speaker Robert DeLeo and Dempsey subsided and the House called it quits on Tuesday evening, representatives spent a total of 1,283 minutes in session.

That averages out to a little more than a minute spent on each of the 1,210 amendments filed, with tax dollars being appropriated at a rate of $31.5 million per minute. And all of that was done while taking just 30 recorded roll call votes, some of which were simply to take attendance.

Before the clock struck midnight Tuesday, the aroma of celebratory cigars wafted through the smoke-free halls of the State House, marking the conclusion to another year’s budget week, which is slowly losing its right to that designation.

There are many factors why House leaders ran out of reasons to try to extend debate for optics’ sake into Wednesday, when the process has ended the past five years. As Dempsey has honed his amendment-crunching process, members of both parties have also seemed to lose their lust for the fight.

Liberal Somerville Democrat Rep. Denise Provost sparked a mini-debate over freezing the income tax rate at 5.1 percent, rather than allow it to possibly tick down in January. But she withdrew her amendment rather than put her colleagues on the spot by forcing a recorded vote that might become election fodder in 2018.

On the other side of the aisle, Rep. James Lyons rolled out a multi-pronged plan to reform MassHealth, a program whose size and growth is making many other investments impossible. Lyons couldn’t even get his GOP compatriots to help him force a roll call on a measure that included a control board for MassHealth.

“We really need to understand what we’re voting on, and we don’t,” Lyons lamented, a sentiment echoed from time to time by members of both parties.

There’s also the issue of money. After increasing local aid and paying for MassHealth, pensions and debt, there was precious little discretionary money to spend.

Just north of $75 million was added to the bottom line during deliberations, most of it in the form of local earmarks. Those funding carve-outs can be a reward to the rank-and-file for fealty, if they can make it past the governor’s veto pen and somehow find their way into a constrained capital budget.

In the end, only Lyons voted no on the budget.

The House went second in the annual budget dance, and used lower caseload projections at MassHealth than those used by Baker to put together his budget. On paper at least, that freed up some money to spend on local aid, early educator salaries and more. 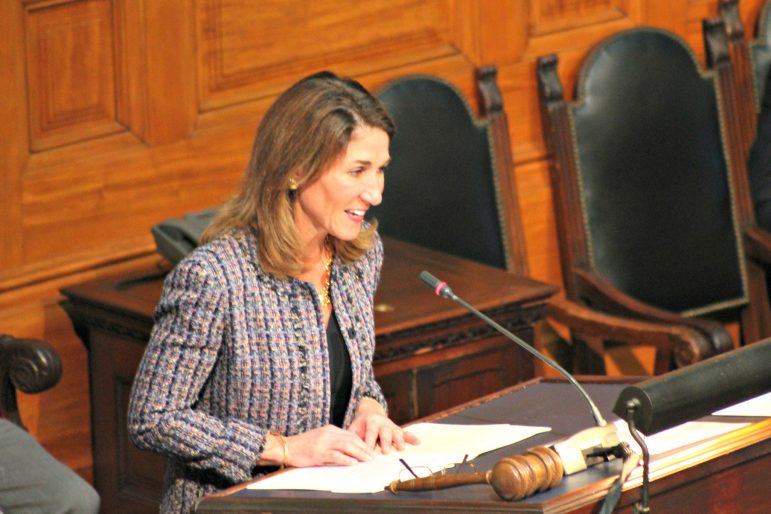 This AM, I told @FinancialCmte their bill to neuter consumer protection & unleash bad behavior on Wall St is immoral https://t.co/nWAXldHm9i

“There is a significant thing going on in state government that everyone should be aware of,” state Comptroller Thomas Shack said last week.

Shack proceeded to sound the tsunami alarm, warning that core state services could be in jeopardy in the next five to 10 years as older state employees leave the workforce and take their skill sets with them.

“This is really an issue that’s going to hit us whether we like it or not,” Shack said during the introduction to his 2017 Agency Leadership Summit April 26. “Whether we think the workforce should be halved in the next five to ten years, it’s going to happen.”

More than 30 percent of the state’s workforce is currently eligible for retirement, Shack said, and this “silver tsunami” of retirement-eligible workers is projected to swell to roughly 45 percent in five years.

As older employees leave, Shack said, they will take with them their expertise in operating the state’s technological systems, many of which are outdated and unknown to younger employees just entering the workforce.

“Our technology systems are not exactly state of the art. These are systems basically designed in the late ’90s or early 2000s. They’ve been upgraded from a technological standpoint … but the fact of the matter is they are still late ’90s or early aughts [the 2000-2010 decade] technology,” Shack said. “Those technologies require different skill sets from a different era.”

Meanwhile, state employees under 30 make up just 10 percent of the total workforce, and Shack said the state struggles to find young people who are interested in working for state government.

“Imagine if you take somebody who is used to dealing with a mobile device and they’re used to gamification … they’re used to fast-evolving technology, and then we put them in front of a black and green screen or an early Windows-based screen,” Shack said. “The fact of the matter is that you can pay them almost any amount and they’re going to have very little interest in actually working for you.”

Polito, others speak out against sexual assault on ‘Denim Day’

Half of the nearly 300,000 children in “high-poverty” school districts in Massachusetts receive breakfast at school, with the highest average participation rates in Lowell and New Bedford, according to a new report.

The report, released last week by the Eos Foundation and the advocacy organization Children’s HealthWatch, recommends the state’s highest poverty schools — those with 60 percent or more of students qualifying for free or reduced price meals — adopt free “after the bell” school breakfast programs, where the meal is made available for students to eat in their classroom after the school day begins.

At the top of the list for breakfast participation among the 33 districts studied are Lowell (68 percent), New Bedford (67 percent), Brockton (64 percent), and Springfield (62 percent). Randolph has the lowest rate with 18 percent, with Malden (19 percent) and West Springfield (20 percent) close behind. Worcester ranks 12th at 48 percent.

The Eos Foundation held its annual Healthy Start Awards ceremony Thursday, recognizing 138 schools from 24 districts for their breakfast programs. The New Bedford school district was honored with a $10,000 award for its efforts to expand classroom breakfast programs to reach its nearly 13,000 students.

“The most obvious reason for offering free breakfast after the bell in low-income schools is that kids won’t go hungry,” New Bedford Superintendent Pia Durkin said in a statement. “Beyond that, it’s evident that breakfast boosts learning, attention and test scores. As educators, we need to work through adult concerns about the logistics of running breakfast programs after the bell and in the classroom to do what’s best for kids.”

All high-poverty schools are required to offer breakfast programs, and the report said that making breakfast available to eat in-classroom increases participation rates. For example, 39 percent of Hyannis West Elementary School students participated in their school’s breakfast program when it was offered before school in the cafeteria, and that rate shot up to 93 percent when school officials moved breakfast to the classroom after the bell.