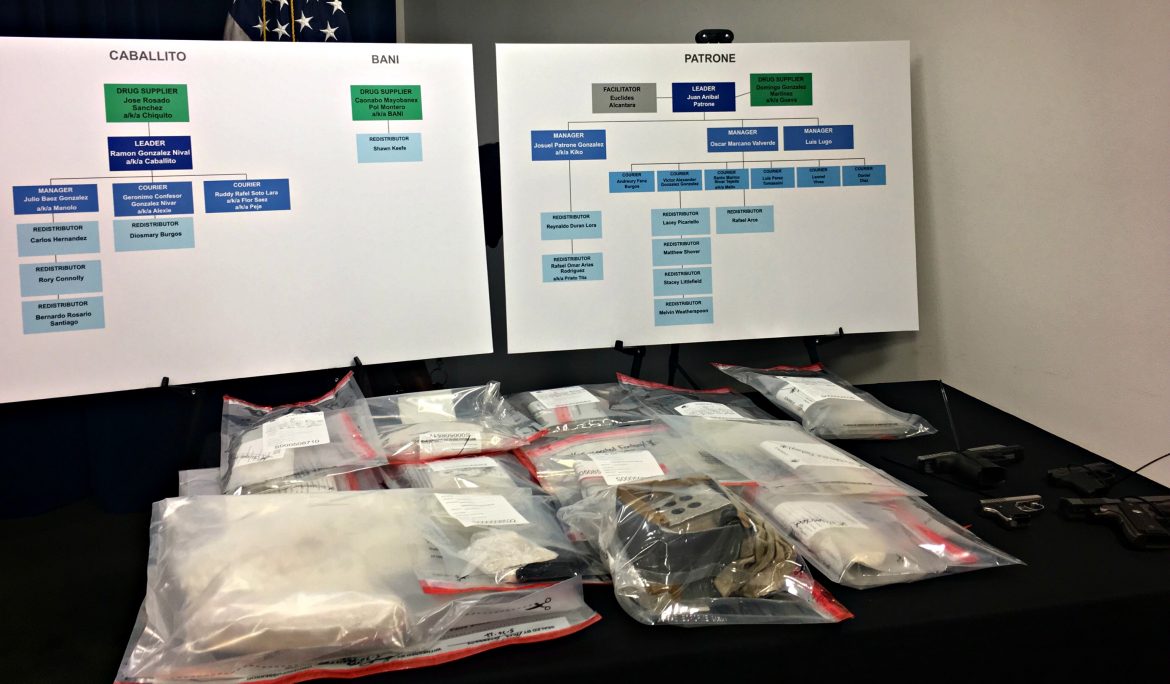 BOSTON — Thirty people were arrested Tuesday on gun, drug and immigration charges in a sweep that brought down a Lawrence-based network that Acting U.S Attorney William Weinreb described as “one of the largest fentanyl trafficking organizations ever seen in Massachusetts.”

Approximately 250 law enforcement officers were involved in the sweep, seizing several guns and two kilograms of suspected fentanyl in the culmination of a year-long trafficking investigation dubbed “Operation Bad Company,” Weinreb said in a press conference at his office at the Moakley Federal Courthouse.

“Those arrested … need to be held accountable for their actions because they have chosen to distribute this poison and profit from the misery that they spread,” Michael Ferguson, special agent in charge of the New England division of the Drug Enforcement Administration, said. He cited state Department of Public Health statistics showing 2,069 opioid-related deaths in 2016, 69 percent of which had a positive toxicology result for fentanyl.

Wiretaps captured defendants discussing the drug operations, in some cases “chuckling about the overdose deaths as they continued to distribute the deadly drug,” Weinreb said.

“One defendant even bragged about having been deported several times and discussed the wealth he amassed in the Dominican Republic, including businesses and homes,” Weinreb said. “While these defendants found their conduct amusing, federal authorities did not.”

A total of 34 arrests were made, including four people arrested administratively by Immigrations and Customs enforcement, authorities said.

The arrests included five people unlawfully present in the country and another five who had illegally re-entered after deportation, said Homeland Security Investigations special agent in charge Matthew Etre. Authorities said they are in the process of confirming the identities and immigration status of other defendants who used false identities.

The indictment lists two people as charged with “being an alien unlawfully present in the United States in possession of a firearm and ammunition.”

Weinreb said federal officials haven’t “gotten the message out” that unlawful reentry is “a crime that we are going to be taking seriously.” He said he hoped Tuesday’s arrests would serve as a deterrent.

Often referred to as a “sanctuary city,” Lawrence in 2015 adopted a “Trust Ordinance” prohibiting its local police from detaining or arresting a person based on immigration status alone.

Asked how that status played into the investigations and arrests, Lawrence Police Chief James Fitzpatrick said, “When it comes to criminal activity, all bets are off.” Weinreb said the sanctuary status had no effect on the investigation.

In March, Fitzpatrick announced his department would ask for a “bigger commitment” from state and federal partners to deal with violence related to the drug trade and domestic violence. Weinreb said Tuesday federal officials would maintain a “continued presence” in the city and surrounding communities.

At least 16 of the defendants were Lawrence residents, including the alleged leader of the operation, Juan Anibal Patrone, a 26-year-old dual citizen of the Dominican Republic and Italy. Four people from New Hampshire were arrested, along with two from Lowell, two from Methuen, and one from Burlington. Three people charged were already in custody in county jails.

Weinreb said Patrone was in charge of a “sophisticated and lucrative drug trafficking operation that he ran like a business,” with workers assigned to different shifts and couriers delivering drugs on specific walking routes or in cars equipped with hidden compartments.

The defendants sold drugs to hundreds of customers in Massachusetts, New Hampshire and Maine. Ferguson said 10 grams of fentanyl would have a street value of $200 to $400 in the Lawrence area, while the same amount would go for $600 to $800 in southern New Hampshire and upwards of $1,000 in Maine.

The governors of Maine and New Hampshire have each pointed fingers at Lawrence as they fight the opioid crisis in their respective states, though Lawrence Mayor Dan Rivera has rejected their claims.

New Hampshire Gov. Chris Sununu told the Greater Manchester Chamber of Commerce in March that 85 percent of the fentanyl in the Granite State came “straight out of Lawrence, Massachusetts.” Maine Gov. Paul LePage told State House News Service last summer that people arrested on heroin and fentanyl charges in his state are “from Lowell and Lawrence, Massachusetts, Waterbury, Connecticut, the Bronx and Brooklyn.”

After Sununu’s comments, Gov. Charlie Baker said he viewed addiction “as a problem that affects us all and I think singling out a single community or a single state is just not accurate and it doesn’t represent what the vast majority of us believe to be the case.”

Weinreb and others who spoke at Tuesday’s press conference said overdose deaths and addiction are a national problem that extends beyond the Merrimack Valley.

“Unless we do something about cutting off the supply, we’re never going to be able to make a dent in this problem,” Weinreb said.

The investigation was conducted jointly by the DEA Cross Border Initiative, comprised by the DEA and the Andover, Haverhill, Lawrence, Lowell, and Wilmington police departments, with the Massachusetts State Police.