The origins of the movement for a $15 minimum wage, the Fight for $15, began with a one-day strike in November 2012 by fast-food workers in New York City.

After years of high-profile victories such as in Seattle, California and New York City, the movement is either becoming an international phenomenon or in its death throes depending on your point of view.

Locally, Councilor at-large Khrystian E. King proposed a resolution calling for the City Council to support the Legislature’s efforts to raise the minimum wage to $15. The Council passed the resolution last night by a vote of 8-3.

WHEREAS: No one who works full-time should be paid so little that they cannot make ends meet; and

WHEREAS: Our state’s economy works best for everyone when all working people are able to meet their basic needs; and

WHEREAS: For employers, higher wages mean more efficient workers and less employee turnover, making is easier to recruit and retain workers and helping their bottom line; and

WHEREAS: When workers have more money in their pockets, they spend it at small businesses in their neighborhoods, helping those local businesses grow and create more jobs; and

WHEREAS: A full-time worker in Massachusetts earning the minimum wage still makes only $22,880 a year; and

WHEREAS: Many workers earning the minimum wage are forced to work three or more jobs to piece together enough money to pay their bills; and

WHEREAS: The sub-minimum wage for tipped workers leaves servers at diners, pubs and pancake houses; hairdressers; car wash staff, airport wheelchair and parking attendants; valets and other tipped workers facing financial uncertainty, and makes them vulnerable to harassment and discrimination; and

WHEREAS: Eight other states, from California to Maine, have eliminated the sub-minimum wage for tipped workers, without seeing any harm to restaurants or a reduction in tipping; and

WHEREAS: Forty percent of workers in Worcester would see their wages rise if the minimum wage were increased to $ 15 per hour;

NOW, THEREFORE, BE IT RESOLVED:

That the Worcester City Council does hereby support legislation (H.2365 and S. 1004) to create a statewide $15 per hour minimum wage for all workers in Massachusetts culminating in 2021.

Objections to raising the minimum wage to $15 are numerous, but most often center around the premise that raising it reduces the number of jobs.

The Bay State has a history of leading the way on increasing the minimum wage. Beginning in 1988, the commonwealth has on nine occasions raised its minimum rate more than federal standard. 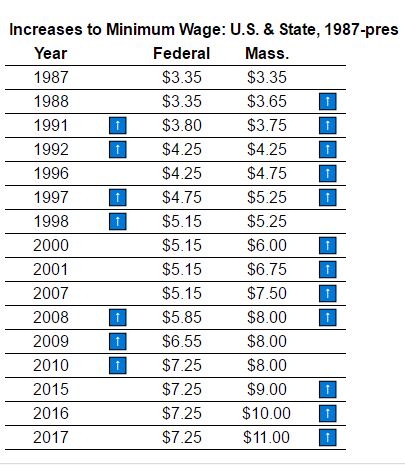 If the theory that increasing the minimum wage costs jobs is correct, one would expect that in the years following those increases that the state would see higher unemployment or decreased labor force participation than the country at large.

For the most part, it did not.

The Sun recently examined unemployment and labor force participation rates from 1987 to present for Massachusetts and the United States. We excluded the latest raise to the minimum wage, to $11 per hour on Jan. 1, for which complete data does not exist, and examined the 12 months following minimum wage increases that exceeded increases to the federal minimum wage. 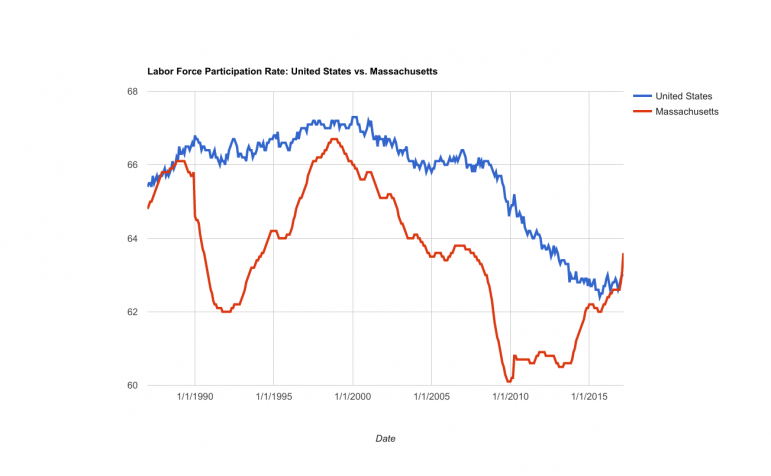 To be sure, the data does not speak to the nature of those jobs or numbers of hours worked. It neither supports nor refutes claims the increasing wages held back what would have been greater growth. Moreover, it remains true that increasing wages in the long run increases the economic incentive to automate jobs out of existence.

However, to the central argument that increasing the minimum wage in Massachusetts decreases jobs, the evidence is clear: It does not.

For this reason, we support Councilor King’s resolution and increasing the minimum wage to $15 per hour by 2021.