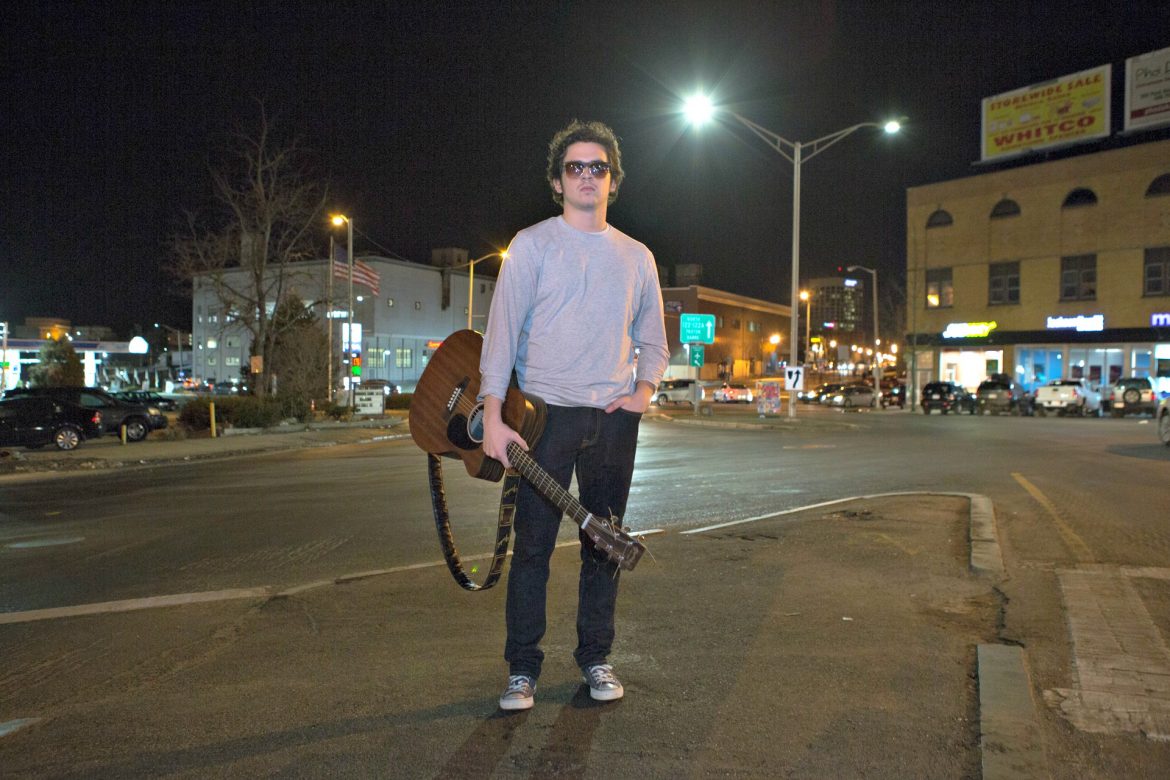 Dezi Garcia's career appears ready to take the on-ramp to success, but first he must navigate the difficult intersection of talent and opportunity.

This article was originally published in the March 12, 2017, edition of the Sun.

We are living in a digital world, and Dezi Garcia is an analog guy.

Or at least that’s what the young Grafton Hill crooner wants people to hear when they listen to the six songs on the album he released to iTunes Jan. 27: “Analog Mind in a Digital World”.

“Ultimately, an analog mind is an ‘outcast’ way of thinking,” Garcia said. “It’s like an introvert [who] realizes the complexity of his or her mind and steers away from mainstream thinking.”

While you wrap your head around Garcia’s free-thinking singer-songwriter perspective, consider the mind-numbing gauntlet that lies between the St. Peter-Marian graduate and the sold-out stadium tour dreamt of by most musical up-and-comers.

A little outside-the-box thinking might not hurt, after all.

After more than two years of writing, it took Garcia, 22, about another year to record and produce 18 minutes of music for the EP. 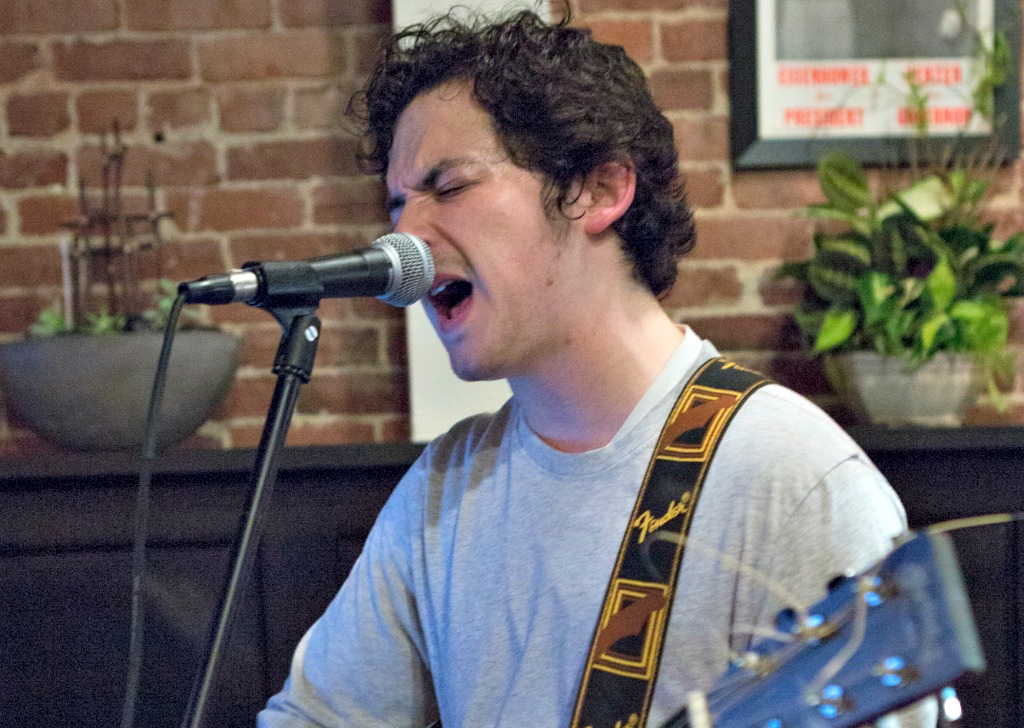 And now he’s searching for an agent and/or manager to help him book more gigs outside of Worcester and begin to boost his profile as he aims for a summer tour that spans the East Coast. You won’t get much argument about Garcia’s talent, but settling on the best way to leverage that ability into a sizable audience — that’s not so cut and dried.

“I’ve been in talks with people, but I don’t have anyone that’s filled the mold or is proactive enough for me in the industry,” Garcia said. “I need someone capable of doing more than I am. I need someone to be in charge of merchandise, and to be there to help me out with anything.”

“In my opinion, Dezi could really use a good team around him to support and drive his music forward,” said Carl Hovagimian, studio manager and audio engineer at Deep Blue (dB) Studios, 76 Webster St., where Garcia recorded five tracks for “Analog Mind.”

“Good management, marketing and resources are key to success. He has the talent; he just needs a push in the right direction.”

Sam James knows a thing or two about local musicians raising their own profile, and he believes Garcia’s search for an agent or manager is “pretty unnecessary.” Garcia should be focused on getting on Spotify playlists and pushing his album over social media, he said.

“He can do it on his own,” said the Worcester native and St. John’s High grad, known locally as a former contestant on “The Voice,” a reality TV singing competition.

“Every single person is going to wait on your project until you break your own project. Record labels can only do so much,” James said. “They’re pretty much useless because of the way the music industry is. You’re not selling units, you’re relying on streaming now.” 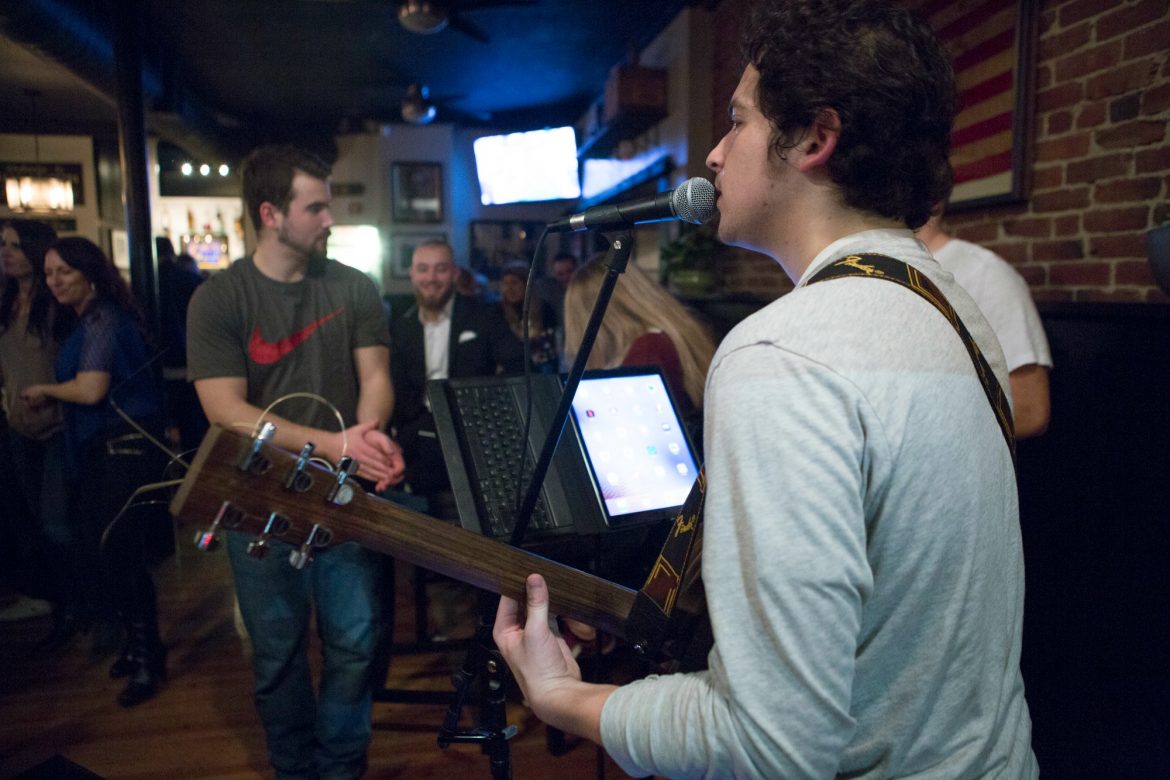 No matter what direction Garcia decides to go, James suggests he shouldn’t wait too long to start making moves.

“You should always be in rush to do whatever you can in the music business because there’s a million people that do exactly what you do. I say, the faster the better with everything. And it took me a really long time to learn that. I didn’t start going out to L.A. until I was 26, and I felt really late to the party,” said James, who released his own album back in October.

Joe Presti, a videographer for Dirty Water TV — a music, entertainment and nightlife series on NESN — met Garcia when Garcia was performing an acoustic set at Sterling’s in Boston, where Dirty Water TV filmed a brief video of Garcia performing his song “Back to You.”

Presti also thinks Garcia can use networking and social media to build his brand.

“Today, you have all these elements of social media, that you’re able to do it on your own. That’s where the audiences are,” he said. “If you’re self-motivated and driven, which Dezi is, and have a vision and follow that path, even if he signs with a manager or not, he has everything it takes.”

James, who signed with a record label when he turned 28 but has since struck out on his own, said, “We live in 2017, so record labels are pretty much not a necessity. When you’re from Worcester, and you’re really talented and have a lot going on, it’s easy to think that you need an agent, manager and record label, and that will solve all of your problems.

“That’s not really how it works. I just figured that out myself.”

James, a frequent Worcester performer who lives in Sturbridge, lists cities like Nashville, Tennessee, New York City, Miami and Los Angeles as places where Garcia should try to make a name for himself to expand his brand.

Closer to home, Garcia made such an impression on Presti that Dirty Water TV invited Garcia to be part of its livestream at The Greatest Bar, one week after filming at Sterling’s. 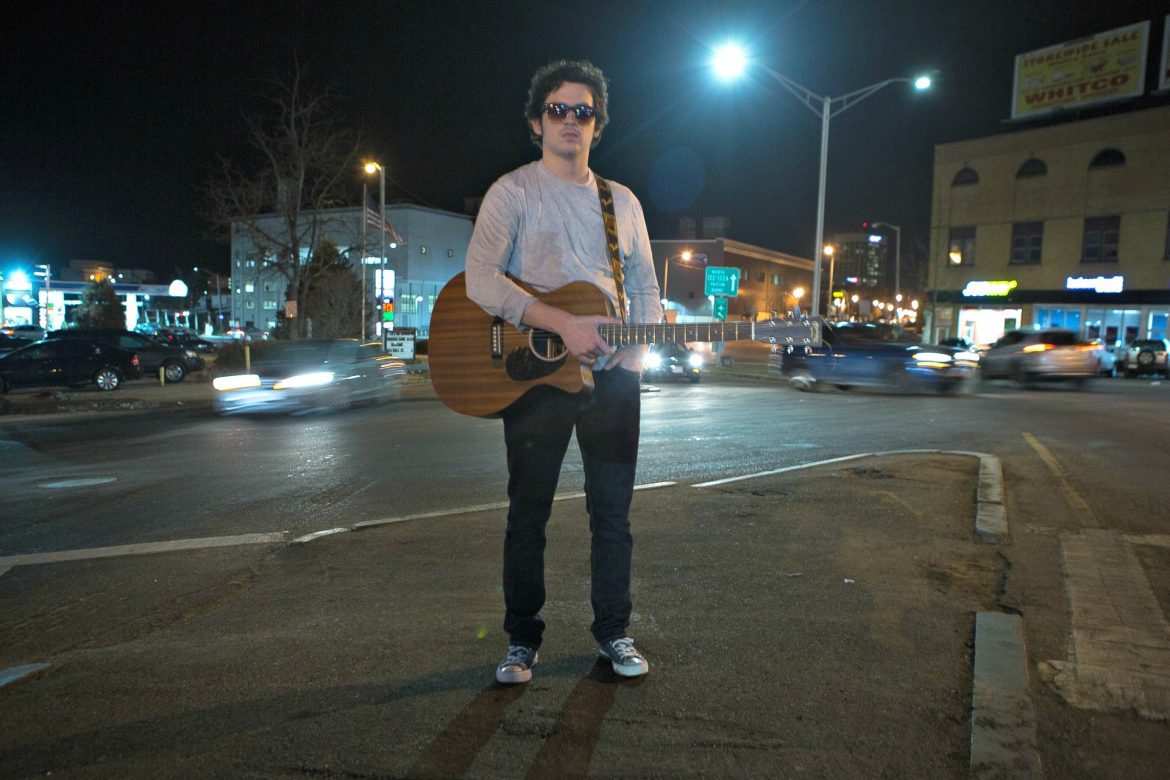 “I think Dezi is a great, young talent. He’s passionate about everything he does. He’s not doing this because he’s trying to prove anything. He’s doing it because he wants to put his heart and soul into it,” Presti said. “It really translates to his music. That’s why I enjoy listening to him.”

In Worcester— where his dad, Iggy, is a city police officer and mom, Andrea Borrelli, is a business analyst for the state — Garcia performs several times each week at bars and restaurants on Shrewsbury Street, in the Canal District and up and down Park Avenue. He’s also played gigs in Hingham, Boston and Newport, Rhode Island.

When performing live, Garcia turns to the songs he grew up with, from artists like Third Eye Blind, Oasis, Coldplay, Sublime and The Black Keys.

While he said he doesn’t have a favorite place to perform in the city, “as long as people are enjoying the music, that’s really all that matters. I’ve had awesome nights and gigs everywhere.”

“I love Worcester. It’s my home. I’ve read a quote before that ‘Where you are, makes you who you are and who you aren’t.’ I really believe that,” Garcia said.

Garcia, whose sister Luciana is a freshman at Holy Name, was captain of the hockey team and played shortstop for the Guardians before graduating from SPM in 2013. He is studying entertainment management and audio production at Bay State College in Boston.

On “Analog Mind,” Garcia showcases the “full-circle”-themed song “Back to You,” and the obsession-based “Addicted.”

“Back to You,” he said, is about “always ending up back to that one thing in your life — whether it be a person, an addiction, an interest — and making your life come full circle. That’s kind of what the whole project is about.” 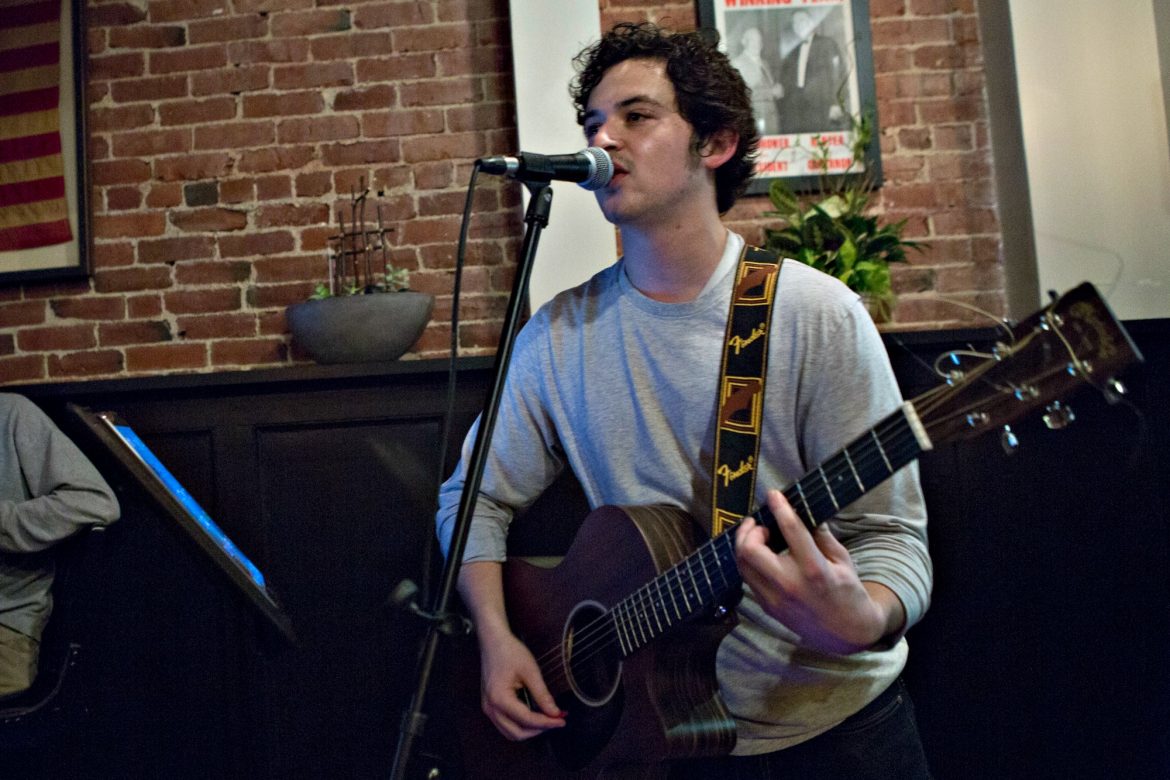 Garcia sings original tracks and covers at bars across Worcester.

The album also includes the original songs “Visions” and “Drifting Away” — which both debuted on his first EP, “Dezi Garcia,” in 2015 — and title track “Analog Mind in a Digital World.” The final song, “LIFE,” is the longest song on the album (3:31) and serves as an apropos ending to the EP with its dreamy rhythm and message that “life goes on.”

“It’s a concept album. It’s about being different in the world today,” Garcia said. “It’s about standing out in a crowd of people and things coming full circle for one individual. It’s about the ups and downs of one person, and the life that comes out of dealing with the everyday things people have to deal with.”

Garcia recorded “LIFE” at Kissy Pig Recording Studio in Allston, but finished the rest of the album, including production, at Deep Blue Studios.

“Working with Dezi was a great experience because he takes his art extremely seriously and strives for perfection,” Hovagimian said. “It was a long process that took months, which would tell you just how much time we put into perfecting the project.”

“Where am I going after his album?” Garcia pondered. “The next album and the next project. I don’t know when that will be. For now, my plan is to acquire a ton of gigs up and down the East Coast for a short summer tour — maybe 10 to 12 days with five or six places lined up.

“I think that once that happens I’ll be able to open up to different concepts. There’s a lot of different riffs in my head and I just need to see where it takes me.”

Wherever he goes, he’ll have fans close by.

“Dezi is super talented. It’s nice to see someone younger taking the reins and getting out there on their own,” James said. “With the new record, if he promotes himself the right way, and books the right shows, he has the talent to go far.”

“I downloaded his album a week after it came out. I’ve been playing it all the time. It’s so well-rounded.” Presti said. “This album is just the beginning. He has really bright future.”

Garcia said he still has several original tracks that he hasn’t recorded yet, but will ultimately be part of a larger album in the future, alongside the six tracks on “Analog Mind.”

“There’s more to come. The sky’s the limit. I have faith in myself. I’m not putting any limits on myself. I’ll see where this takes me. I’m just going to continue making music because that’s what I love to do and what I’m going to keep doing,” he said. 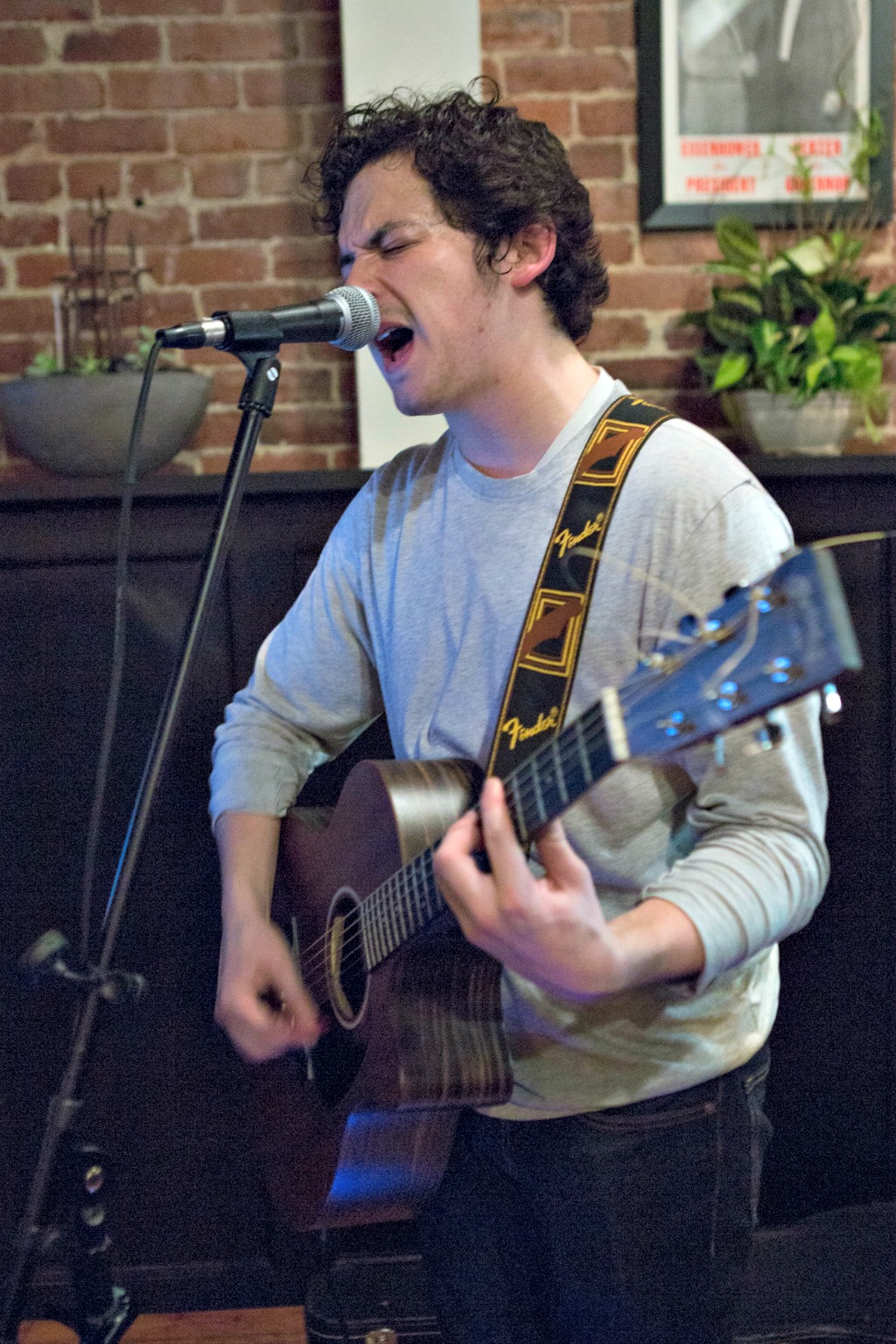 On St. Patrick’s Day, March 17, Garcia will perform at The Loft on Park Avenue from 8 p.m. to 11 p.m. Garcia also will perform in Boston, May 12 at The Black Rose and May 14 at the Landmark Events Showcase Festival at the Hard Rock Cafe.