Not long ago, I wrote a column asking what, if anything, we have learned from the closing of Our Lady of Mount Carmel Church in Worcester. In that column, I was critical of Bishop Robert McManus for not getting more publicly involved and for not reaching out to personally guide the members of the parish through that difficult ordeal.

I also criticized the Diocese of Worcester for not having a list of best practices to help guide the pastor and the parishioners through the process.

I have reflected on that column a great deal.

Related: On Mount Carmel, have we learned anything?

For me, the column was not all that easy to write. I am proud of my Catholic faith. I was also a devoted member of the Mount Carmel parish community and have been for many years. The pastor is my friend, as are so many of the people who attended Mass there each week.

The other day, as I was sitting waiting for Mass to start, at a different local church, it occurred to me that over the next 10 years or so, Worcester will most likely experience more church closings – perhaps many more.

As it relates to our churches, I have often thought about two things: (1) that the people sitting in church pews are much more likely to have gray hair; and (2) there are far fewer people attending weekly Mass.

It is an undeniable fact that the decline in regular involvement with institutional churches is felt by most, if not all, religious groups in the Northeast.

One of the primary reasons for the decline in church attendance is that fewer young people are going to Mass. The result is the “graying” of many parishes.

If these current trends continue, we are likely to face many more church closings in the years ahead. As a warning, we should take notice that the nearby Diocese of Hartford just announced the closing of 26 church buildings (more about that later).

What if … Worcester: Gardens and gargoyles: Dilapidated churches grow into urban farms

However, over the past 17 years, the number of active parishes and missions – churches tied to a parish of record basically for all sacramental records and parish programs – has decreased dramatically to only 100. That is a reduction of about 25 percent in only 16-17 years.

In the United States, while the number of Catholics in the South and West has increased, it has shrunk in the old industrial centers of the Northeast and Midwest.

Statistics provided by the Diocese of Worcester show that over the past five years, the number of Catholics in area parishes decreased from 301,149 to 286,149.

But that 5 percent reduction is only a part of the problem.

According to Pew Research, the percentage of U.S. Catholics who reported attending Mass at least weekly fell by nearly half, from 47 percent to 24 percent, between 1974 and 2012. The Worcester Diocese estimates that only 23 percent to 24 percent of those registered attend Mass weekly.

So, what can or should the diocese do?  I have a few suggestions.

Whatever is done, involve parishioners at the very beginning

I do not mean to be heretical here but this is as much a political problem as it is anything else. The parish is not the building used to celebrate Mass. The parish is the people who celebrate the Mass while sitting inside the church building. In my opinion, parishioners need to be at the center of any discussion about the future of their parishes.

Whatever course the diocese chooses to take, it would be wise to start by having an active and fully engaged conversation with the members of each congregation – even those with relatively healthy attendance. The diocese should start with separate conversations, about the future, within each parish. Once those conversations are completed, a larger conversation bringing various congregations together should take place.

Imagine a dynamic conversation with members of various parishes talking about what their parish and their diocese will look like in the years ahead – about what they could do to attract new people to their parish. That might very well invigorate parishioners.

If the diocese tries to figure this out on its own or if it brings parishioners into the conversation near the end when church closings are being considered, and after decisions have been made, it will only exacerbate the problem.

The time to start this conversation was a few years ago. So, time is of the essence. The diocese should engage its communities now, not when it is facing an imminent church closing.

Look at attracting new people to the church

With fewer and fewer people attending Mass, the diocese does not need nearly as many churches. That is, unless the diocese finds a way to increase, or at a minimum stabilize, the number of people who are active in area churches.

While many local parishes are struggling to fill seats, St. Peter’s Church in Main South is one example of a parish with a thriving congregation. Pastor Monsignor Frank Scollen told me that to be successful, “You’ve got to work at it!”

The monsignor ran through a list of church programs designed to reach out and bring people, even non-Catholics, into the church. The parish runs an ESL program, a mentoring program, a food bank and a very popular basketball league for children, among other programs.

The St. Peter’s community also reaches out to groups of new immigrants, offering a weekly Mass in Spanish and another in Swahili and English. “Those Masses are packed,” Monsignor Scollen said. The church boasts an African language choir, Spanish language choir and two English language choirs.

Referencing Pope Francis, Monsignor Scollen said, “We’re not here to judge. We’re here to invite people to be a part of us.” He said that St. Peter’s overall success has been its ability to establish “a real community connection.”

While all of the St. Peter’s programs may not be appropriate for every parish, it should be clear that the ability of a parish to reach out and bring new people into the church will minimize the need for future church closings while at the same time invigorating parish life for everyone.

In any planning process, the diocese should help guide individual parishes by putting together a list of best practices that might attract more people into the parish.

As I wrote earlier, this is as much a political problem as it is anything else. As such, the diocese should learn from the experience of local government. Cities and school districts develop comprehensive, long-range plans to guide their efforts.

While municipal and school planning is not the same thing as a church closing, it can be instructive. Having gone through that process a few times in my career, I can tell you that developing a comprehensive plan and involving the community in its creation is a smart move.

The Worcester Diocese, local church leaders, and parishioners should look at population shifts, attendance, building location, proximity to other churches, building condition and parish costs, among other things.

To do this right, the process must be led by professionals with experience dealing with this type of planning problem. That means going outside of the church and getting professional help to guide the process.

The Diocese of Hartford has just completed planning for the future of its diocese. To assist its efforts, the diocese hired a Minnesota-based consulting firm that specializes in this kind of planning.

As in Worcester, the Hartford Diocese has seen a huge drop in the number of people attending Mass. That diocese now is facing a seismic upheaval. 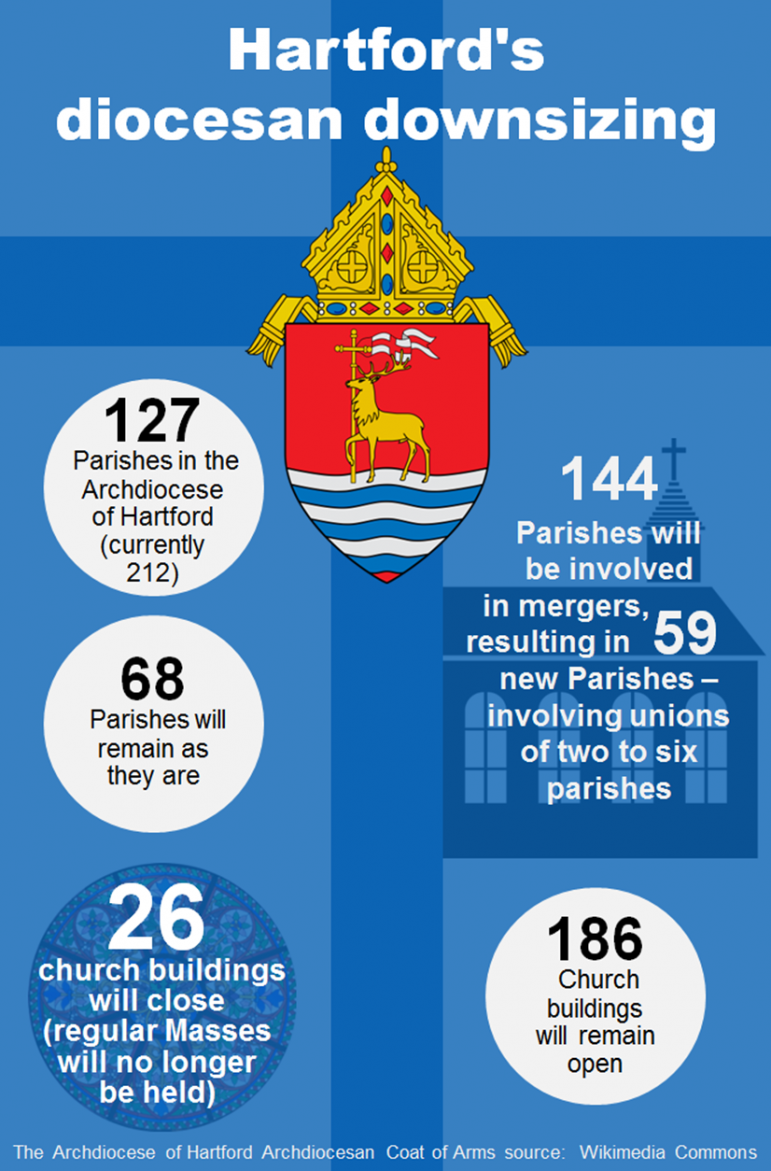 Of the 212 parishes in Hartford, the diocese plans to close almost half, reducing the overall number to 127. A staggering 26 church buildings will close.

So what should the Diocese of Worcester do?

As it stands now, if nothing changes, we can expect more messes like the one surrounding Our Lady of Mount Carmel – except this time it will involve multiple churches.

Although there are no easy answers here, the time to start dealing with what our diocese looks like in the coming years is now.

5 thoughts on “Mariano: It is time to start talking about and planning for the closing of more churches”