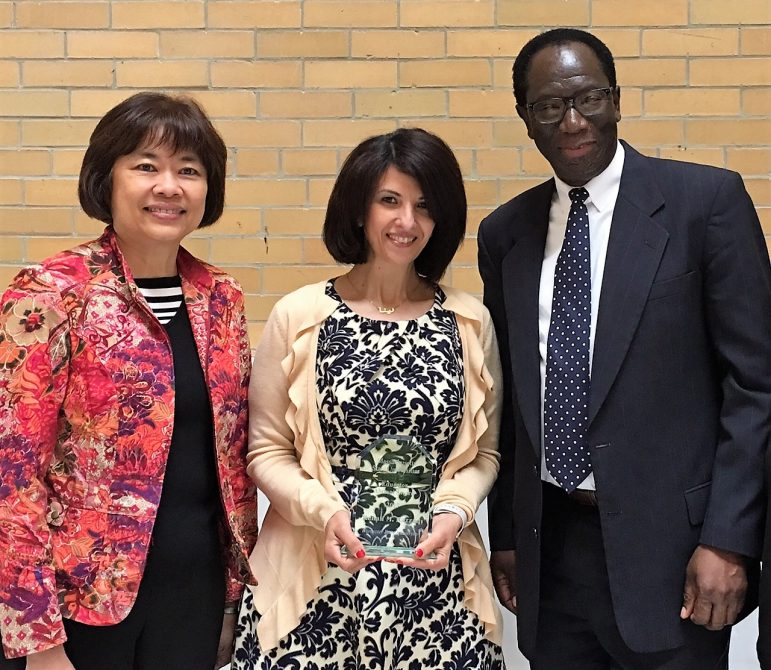 Educators representing the nine campuses across the State Universities of Massachusetts were recognized for teaching excellence. Among the educators honored were school principals, teacher mentors and team leaders, a developer of professional development programs, and a teacher helping inner-city students gain exposure to the arts.

Razzaq is in her 15th year as a teacher at Doherty. She has served as department head for the last six years.

She was born in the United States to immigrant parents from Palestine. She obtained her GED then completed studies at Quinsigamond Community College. She transferred to Worcester State University (then Worcester State College), from which she graduated in 2002 with a bachelor’s degree in Mathematics and in 2009 with a master’s degree in Secondary Administration and Leadership.

She is also an adjunct professor in the Mathematics Department at Worcester State and is enrolled in the Learning Science & Technology Ph.D. program at WPI.

Anna Maria College announced that Professor Joan-Beth Gow, Ph.D., has been published by the National Center for Case Study Teaching in Science for her case study called “We Are Not Alone: The Unseen World of the Human Microbiome.” 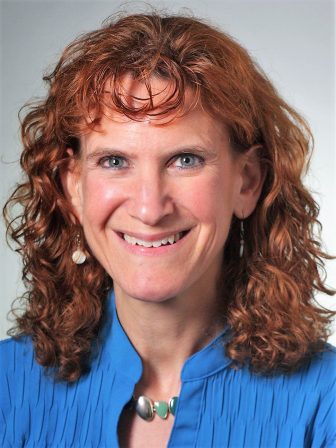 This case study creatively introduces the human microbiome (the genes of the microbiota that live on and in humans) from the perspective of one of its microbial occupants.

“The role that microorganisms play in our existence is an exciting scientific field, but that fascination can be elusive in a traditional science book or classroom,” Gow said. “By creating a story and putting names and narrative to our Human Microbiome, we refresh our pedagogy for the flipped classroom model and can better engage students when they are in class.”

Gow teaches a variety of courses in the Natural Sciences for the School of Fire and Health Science and has published case studies for science teaching as well as articles on case-based teaching and other engaging pedagogical strategies.

Steven B. Bird, M.D., professor of emergency medicine, has been elected to the Society of Academic Emergency Medicine Board of Directors and will serve as its president-elect for a one-year term.

Dr. Bird, vice chairman for education in the Department of Emergency Medicine and the emergency medicine residency director, has been actively involved with the society since 1998, most recently as secretary-treasurer. As president, Bird intends to focus on resident and faculty well-being.

“Burnout is increasing in physicians, particularly in emergency physicians, who have the highest burnout rate of any specialties with 70 percent meeting the criteria for burnout,” Bird said. “I firmly believe that a well physician will take better care of his or her patients. I think as a patient, you’d want your physician to be well, to be happy and find joy in his or her work. I want to be part of the effort to learn how to mitigate burnout and improve physician wellness and bring the joy back into medicine.”

The Fallon/OrNda Community Health Fund of the Greater Worcester Community Foundation has awarded Planned Parenthood League of Massachusetts (PPLM) a $12,500 grant to support the work it’s doing to encourage young people to learn about their sexual health and empower parents to become their children’s go-to resource.

The grant will enable PPLM’s peer education program, Get Real Teen Council, and its parent education programs, Let’s Be Honest and Seamos Honestos, to reach more young people and families in Central Massachusetts.

“Too often, young people and parents don’t know where to turn for accurate, non-judgmental information about sex and sexuality, or they are unsure how to start to such conversations. Thanks to the generous support of the Fallon/OrNda Community Health Fund of the Greater Worcester Community Foundation, PPLM will be better equipped to provide young people the information they need to stay healthy and plan their futures and to offer parents guidance for initiating open, honest conversations with their children,” said Dr. Jennifer Childs-Roshak, president and CEO of PPLM.

Worcester faces higher rates of teen births and sexually transmitted diseases (STDs) than many other communities in the state.  With the support of the Greater Worcester Community Foundation, these programs will be able to connect more people with the resources they need and reach communities who face barriers to education and care, including Latino and LGBTQ teens who are disproportionately impacted by unintended pregnancy and STDs.

Read the entire story on the Planned Parenthood website

The city of Worcester will hold a groundbreaking ceremony for the new Blackstone Gateway Park in Worcester.

Once complete, the park will feature approximately a half mile of accessible walking paths, elevated boardwalks and three bridges crossing a section of the Middle River that runs into the headwaters of the Blackstone River, adjacent to McKeon Road. Included along the trails and boardwalks are observational platforms, kiosks, and interpretive signage providing historical and ecological information about the Blackstone River and the role it played in the history of Worcester and the Blackstone Valley Corridor.

Construction time is expected to be about 12 months.