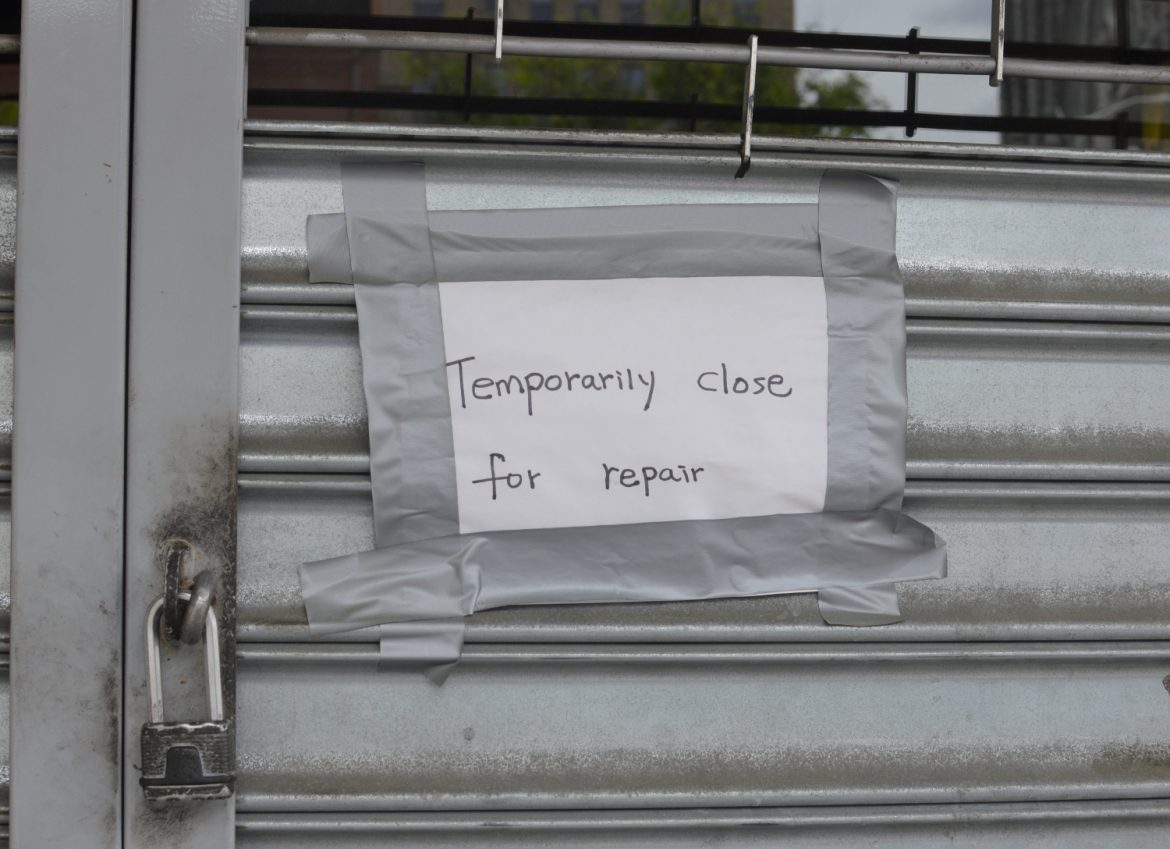 The Great Wall restaurant on Main Street has been closed since April 20.

A longstanding Chinese restaurant in the heart of downtown — and on a list of more than two dozen properties targeted by the city in a sprawling urban renewal plan — has been closed for more than a month as its owner and city officials grapple with how to address its crumbling facade.

The property at 521 Main St., across from the Denholm Building and between Franklin and Federal streets, is home to the Great Wall Chinese restaurant. Significant structural erosion of the rear exterior wall that faces the alleyway known as Allen Court is the primary concern. 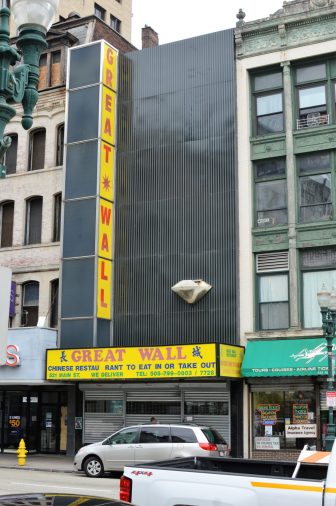 Deputy Building Commissioner David Horne said the damage to the brick and concrete wall impacts the restaurant as well as the adjacent (and connected) buildings at 517 Main St. (which has a MetroPCS on the first floor) and 525 Main St. (home to Alpha Travel Agency).

“It’s an issue we want to get rectified and move as swiftly as possible,” Horne said early last week.

Because of the hazardous state of the rear wall — and the multiple properties affected — the city has taken the property owner, Mindy Jiang, to court to address the issue promptly.

City Solicitor David M. Moore told the Sun that the city code commissioner issued orders for the repairs on April 6, a complaint was filed in Housing Court on April 18 and Jiang first responded to the city when she appeared at a hearing April 20, the same date the restaurant closed.

“When there’s no compliance [to the code orders] then the next step is to take them into court and get a court order to do the repairs. The owner’s actions are under the jurisdiction of the courts to either do the work or face penalties,” Moore said. 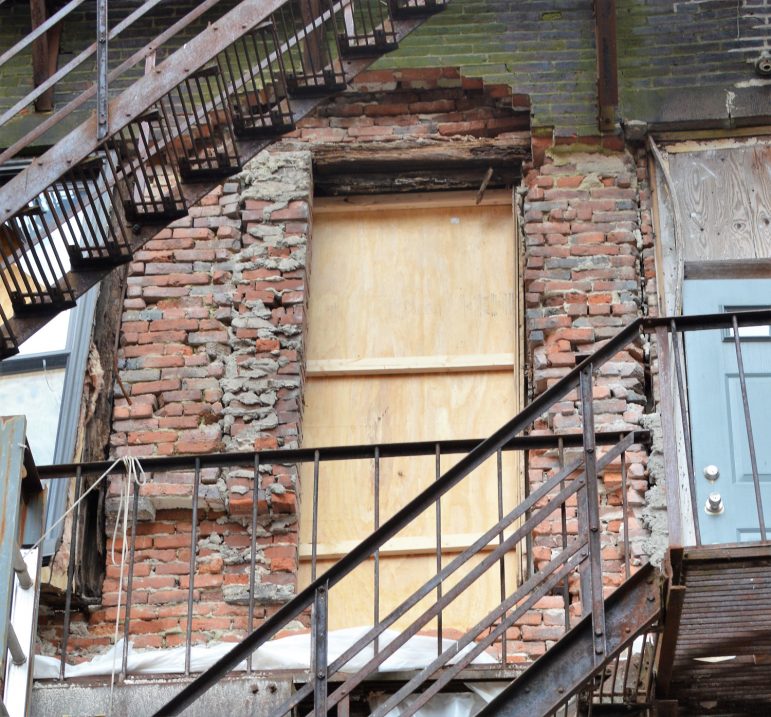 Moore said that Jiang was not in compliance — by not responding to the city — for more than two weeks in April, but is now actively involved with the court to address the orders and remedy the situation.

According to Horne, the city and Jiang are working on a schedule for the repairs to be made and an engineer hired by Jiang, Huang Mj Construction of Quincy, is generating plans to fix the wall.

A public hearing will be held at City Hall on June 1 for the approval of an application from Jiang to repair the exterior wall of the first and second floors of the building. The hearing will be conducted by the Worcester Historical Commission.

According to Stephen Rolle, Worcester director of Planning & Regulatory Services, city regulations require a demolition delay waiver to make repairs to the building “to ensure that historically significant details are not removed during the repair.”

“If a demo delay waiver is granted, the applicant [Jiang] must start work within one year, or the waiver expires,” Rolle wrote in an email. 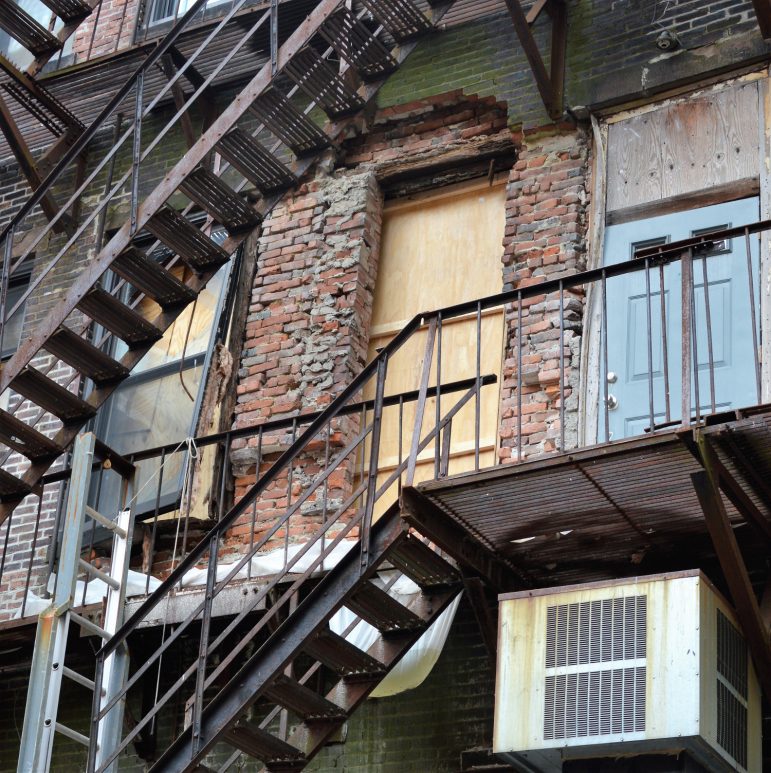 Formerly known as the Holbrook Sawyer Building and the Cheney-Laugher Building, the property was built in 1855. Sharfmans Jewelers began its business there in 1937 — where it also sold appliances — before it moved to the Worcester Center Galleria in 1971. Great Wall has been the first-floor storefront since at least 1988, according to Worcester Historical Society.

The building is targeted for acquisition and rehabilitation by the City of Worcester as part of the Worcester Redevelopment Authority’s Urban Revitalization Plan.

The Great Wall is the property’s only tenant; there are four vacant floors above the restaurant. The revitalization plan, made public more than a year ago and approved by the state in September, proposes a mixed-use solution, with retail space on the first floor and residential space to be developed above.

Great Wall is listed as a business “which may require relocation.”

According to Michael E. Traynor, the city’s chief development officer, the repairs to the property are unlikely to have any adverse effects on future plans for the building.

“The plan designates the building for rehabilitation, so the repairs, while not of the scale that would advance the goal of the plan, would nevertheless be in accord with it,” Traynor wrote in an email response last week.

Under the plan, a total of 28 “key” properties are scheduled for redevelopment and rehabilitation, including 521 Main St., its neighboring business, MetroPCS, and the residential condominiums at 531 Main St. 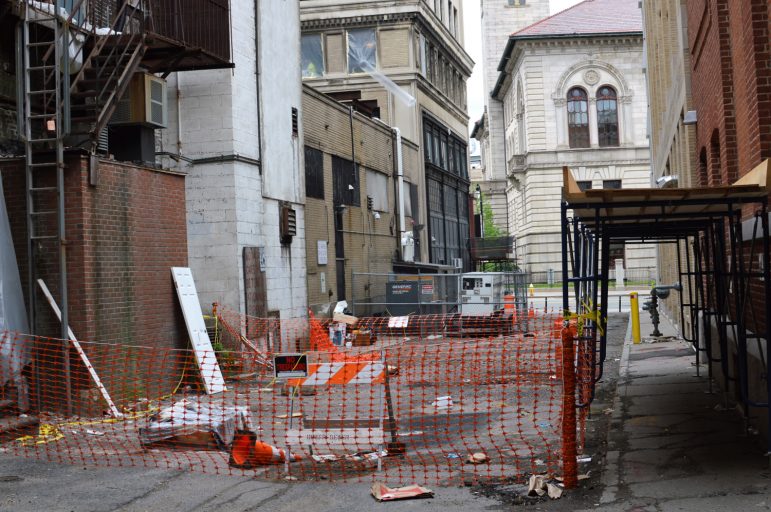 According to Traynor, the owners of these properties will benefit from investing in their property and keeping up with repairs.

“I think there is tremendous potential for that block,” Traynor said, noting the close proximity to the Common, CitySquare, The Grid properties and Hanover Theatre for the Performing Arts.

“Along with the pending redesign and reconstruction of Main Street and Carroll Plaza, [the plan] should provide the current owners or new owners/developers the confidence to invest in not only the two properties in the plan but the entire block,” Traynor wrote.