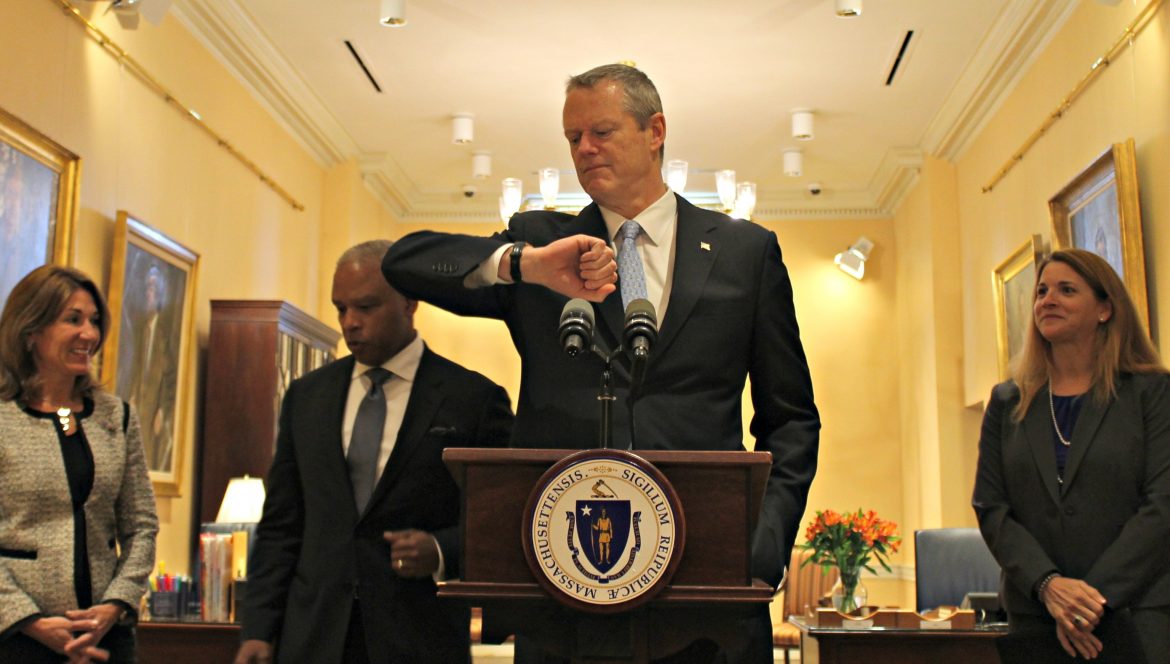 For Gov. Charlie Baker, the time is now to start getting creative in addressing the state's prohibitive healthcare costs.

BOSTON — Employers would be counted on to pay $200 million more a year over the next two years to help pay for rising expenses in the state’s $16.6 billion Medicaid program under a plan the Baker administration presented to the Legislature Tuesday to balance next year’s budget.

The plan, a sweeping package of insurance reforms and temporary assessments — considered taxes by many — calls for a two-tiered assessment on companies, with the bulk of the burden falling on employers with non-disabled workers who enroll in MassHealth.

The new strategy deviates from the $2,000 assessment on certain employers that Gov. Charlie Baker proposed in his budget in January, a plan that sought to raise $300 million. Business groups and lawmakers raised concerns over the governor’s plan, but the House and Senate deferred to the administration in their budgets, essentially signaling to Baker to work with the industry to come up with a compromise.

Secretary of Health and Human Services Marylou Sudders and Administration and Finance Secretary Kristen Lepore said they have been in negotiations with the business and healthcare communities since January on the solution to the MassHeath spending problem.

The administration submitted its package, which features revenues and savings totaling $314.6 million, on Tuesday afternoon to the House-Senate conference committee negotiating a final fiscal 2018 budget plan in hopes that lawmakers will include in the compromise in their bill, due by July 1.

The proposal calls for an increase in the Employer Medical Assistance Contribution levied on all employers with six or more employees from a maximum of $51 per employee to $77 per employee. That change is projected to generate $75 million in fiscal 2018.

The second tier assessment would also apply to companies with six or more employees and be capped at $750 per non-disabled employee who chooses to enroll in MassHealth instead of an employer-sponsored health insurance plan.

The administration expects to collect $125 million from the tier-two penalties, which are designed to target those companies whose workers are contributing to the state’s rising Medicaid expenses by opting for public plans, if income-eligible, instead of private coverage.

To offset some of the new assessments on businesses that would sunset at the end of 2019, the administration has proposed to slow the rate of increase in unemployment insurance costs to save businesses $334 million over two years by adopting smaller rate increases than are currently scheduled.

Officials with many of the major business groups and some healthcare providers, including the Retailers Association of Massachusetts, the Mass High Tech Council, Fallon Health, Boston Medical Center and the Massachusetts Taxpayers Foundation are backing the reform package.

“The comprehensive plan moderates the employer assessment that was originally proposed in January while offering the opportunity for meaningful structural reforms to the health insurance system and rate relief within the Unemployment Insurance system,” said Rick Lord, president and CEO of Associated Industries of Massachusetts.

Many of the adjustments will require not just a change in state law, but also federal approval.

For instance, the administration plans to seek permission from the Trump administration to prevent non-disabled workers with access to affordable employer sponsored coverage from enrolling in MassHealth, similar to how the system was designed in the state’s 2006 healthcare reform law.

Sudders said she met with Centers for Medicare and Medicaid Administrator Seema Verma in May to submit a concept plan, and was encouraged by the response in conversations with CMS officials as recently as a week ago.

Sudders said she would hope, if the Legislature approves, the state could submit a finalized waiver application in August and be on track for final approval by late fall. 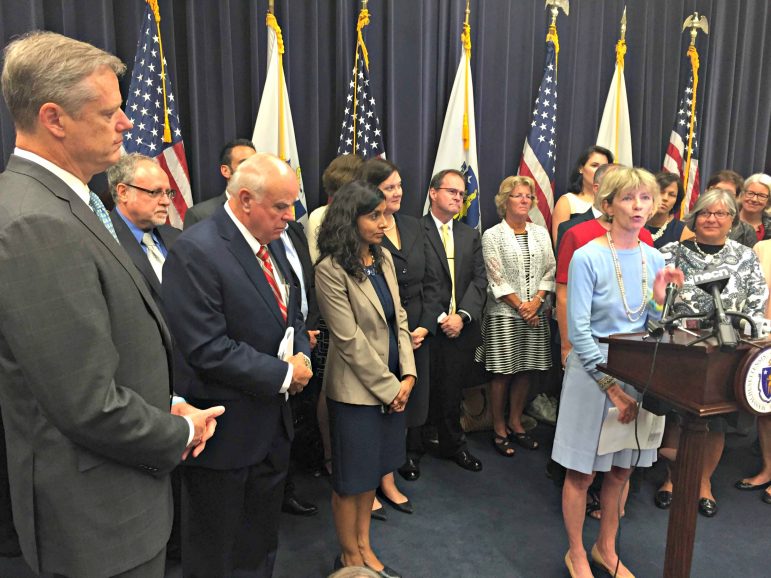 Sudders said the prescription drug changes will allow MassHealth to use tools employed by commercial insurers to narrow drug coverage to those pharmaceuticals most effective for a given course of treatment and to negotiate better prices with a limited network of pharmacies.

These changes will lead to $114.6 million in savings in fiscal 2018, according to Sudders and Lepore.

In order to generate an additional $88.3 million in savings in fiscal 2019, Sudders said MassHealth will seek state and federal permission to transition 140,000 non-disabled adults who became eligible for public coverage through the Affordable Care Act expansion to the ConnectorCare program.

Sudders said the change would maximize federal subsidies and residents shifted to the subsidized plans would still pay no premiums and limited co-pays, similar to MassHealth. Instead of a public health plan, affected residents would choose between private coverage options offered through the Connector.

The administration also wants to shift 230,000 non-disabled parents and caretakers with incomes less than 100 percent of the federal poverty level from MassHealth Standard Plans to CarePlus.

The final part of the proposal comes with no savings attached, but the administration hopes it will slow the growth in overall health care costs in Massachusetts. The plan calls for a five-year moratorium on new insurance mandates, and changes in state law to encourage enrollment in tiered network plans by increasing the premium differential from 14 percent to 28 percent and to expand the scope of practice for optometrists, podiatrists and advanced practice nurses and creating a new mid-level dental health provider known as dental therapists.

It’s unclear how much of the governor’s major health care reform proposal will be adopted by conferees who are working under a tight deadline and mindful that some of the ideas were not seriously considered during budget debates in the House in April and in the Senate in May.