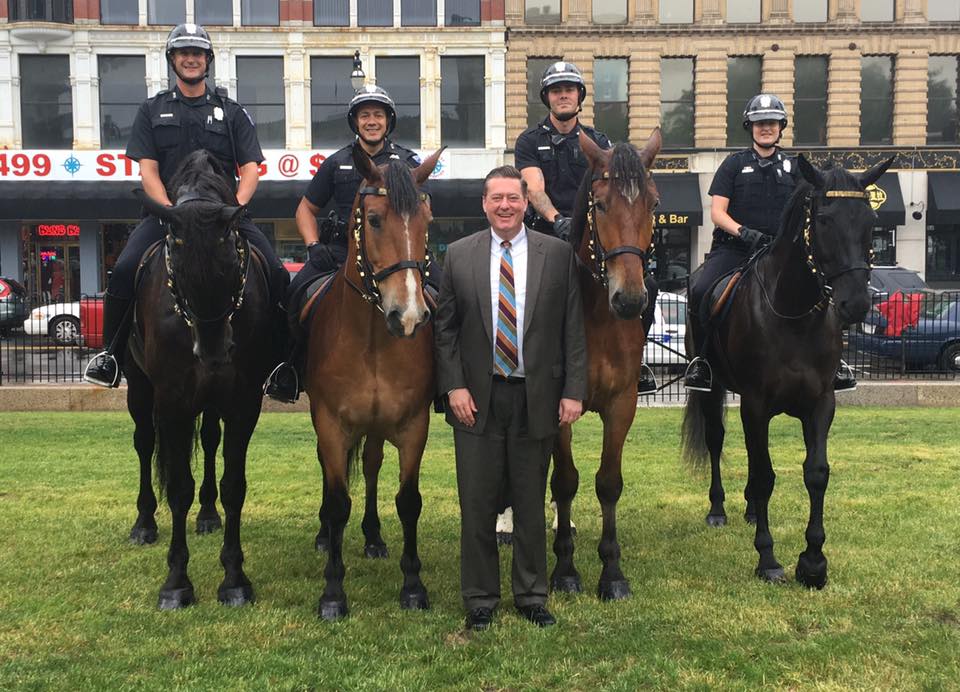 Myra, Major, Justice and Midnight — that’s a nice set of names for some new public servants in Worcester.

Now all the horses have to do is prove their mettle.

They’re off to a good start. Residents who have had a chance to see members of the police department’s Mounted Patrol Unit since the unit’s official first day last Monday have reacted warmly and with curiosity.

That’s part of the idea.

A police officer on a horse doesn’t just have advantages in terms of visibility, crowd control and the ability to quickly traverse different kinds of terrain in an emergency. The likeability factor is hugely important, too. A police officer plus his or her 1,000-pound mount is an engaging and powerful combination, both majestic and accessible.

Children, of course, are naturally drawn to the sight and have not been shy about their excitement.

The nine-officer unit wants residents to enjoy this addition to the city, and has as part of its mission serving as goodwill ambassadors, more closely connecting citizens and the police department.

With this seeming throwback to a simpler time, the city aims to enhance both safety and unity. That’s a lot of hope to attach to horse and rider, but there is a long, proud, global tradition of mounted police backing that up.

Worcester’s horses are gorgeous. And they look good from the taxpayer point of view, too.

The stables and barn at the Worcester County House of Correction were recently renovated, also without directly hitting up taxpayer pockets, according to Evangelidis.

Nine members of the Worcester Police Department are involved, after completing a 10-week training program last winter provided by the Massachusetts State Police.

What’s not to like? Officers are even charged with cleaning up after their horses as part of their duties.

We congratulate everyone involved in seeing this idea through, and we hope it succeeds. But we urge a good dose of “horse sense” to go along with the excitement and expectations accompanying the launch of this experiment.

We hope this idea is yet another building block to bridge the gap between the Worcester Police Department and communities it has sometimes struggled to reach. But the care and maintenance of the horses should never cost taxpayers a dime.

The new police unit should be carefully evaluated in a couple of years for its cost versus effectiveness. Our city may be too small to truly merit a long-term mounted patrol. And even if tax dollars continue to be spared, the time of the police personnel involved is precious to the city and certainly not free.

For now, no nays are allowed. Neighs, though — yes.

The horses are here, sporting their gleaming coats and pleasing names. As for those names, the thoroughbred Myra is named after Worcester-born philanthropist Myra Kraft, the late wife of New England Patriots owner Robert Kraft. Major, Justice and Midnight have their own naming stories.

Formal introductions out of the way, the mounted police unit and the rest of us will have to wait and see how long the welcome lasts. This summer, meanwhile, we’re listening for hoofbeats and anticipating lots of sightings of Worcester’s impressive equine ambassadors.