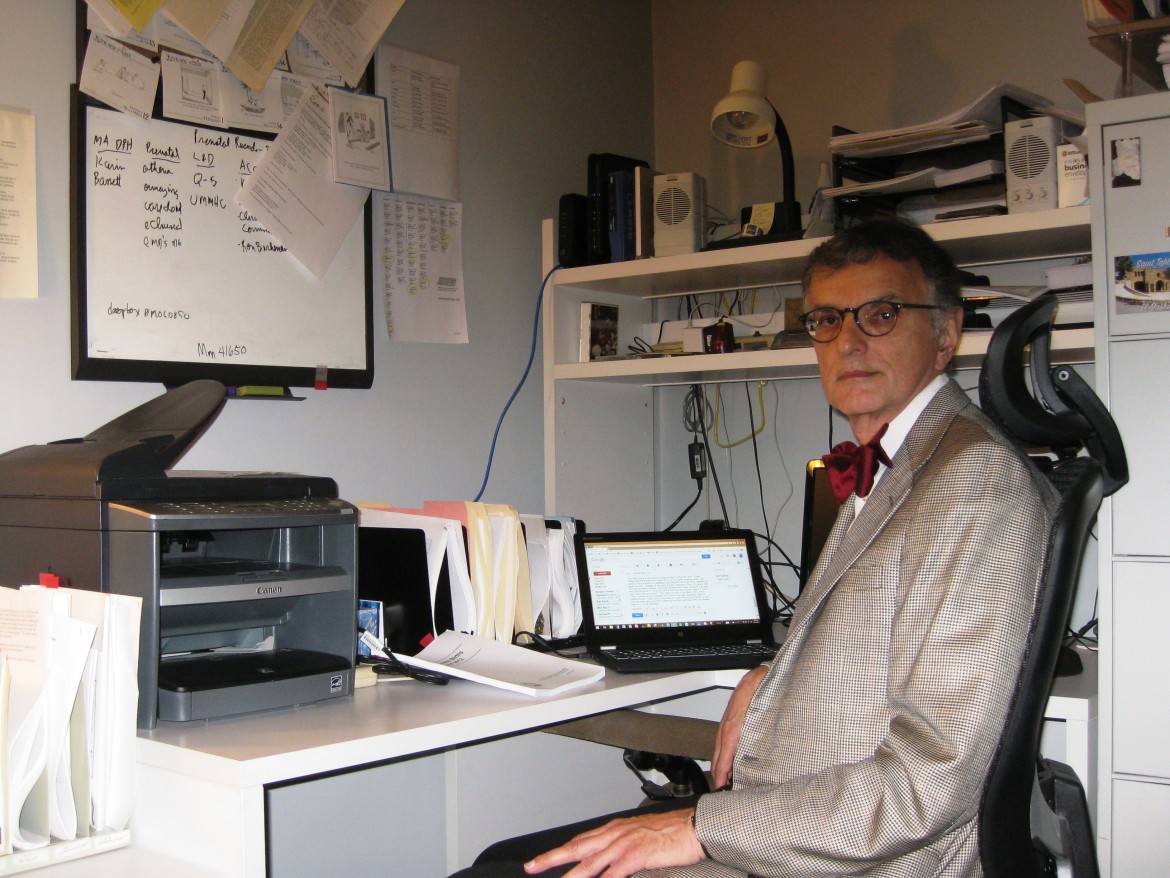 This article was originally published in the second edition of Worcester Sun, Aug. 16, 2015.

Worcester is known for a lot of things.

Its biotechnology achievements are an economic engine.

Medical research at the University of Massachusetts Medical School, some of it led by a Nobel Prize winner, is cutting-edge science.

And entertainment venues, from the DCU Center to bars on Green Street, have provided recreation to generations.

In medical circles, though, Worcester is also known for something else. And that is some of the highest infant mortality rates in Massachusetts, particularly within the Hispanic community.

It is a source of pain to families who lose their babies — often in their first day of life — and a source of some puzzlement to researchers. While theories as to the cause abound — some having to do with the melting pot that is Worcester — state and local researchers admit they just don’t know.

Why does Worcester have the highest infant mortality rate (IMR) in the commonwealth? 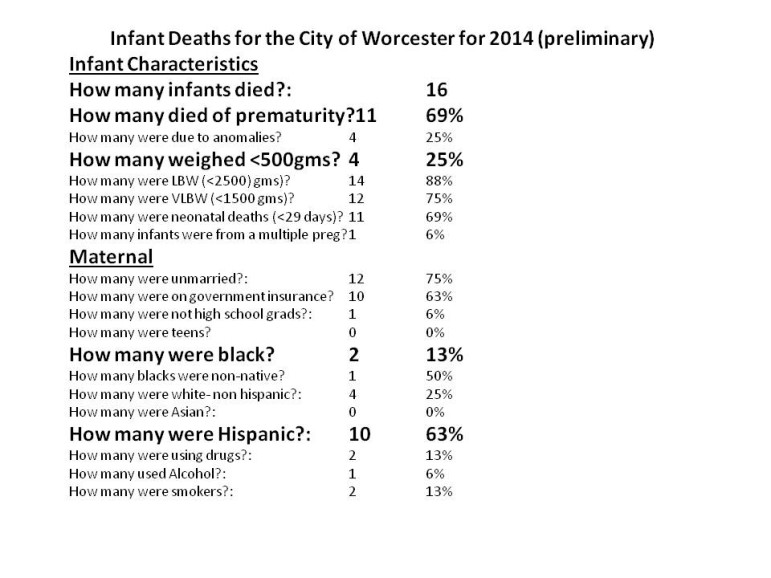 The catalyst for the city’s elevated IMR beginning in the early 1990s, according to Dr. Hafsatou Diop, was an influx of immigrants to the city from Africa, primarily from Ghana.

“The Ghanaian IMR (in Worcester) has dropped since, but is still higher than typical African-Americans,” said Diop, director of the Office of Data Translation at the state Department of Public Health.

The reduction follows years of work by the Worcester Healthy Baby Collaborative, which was created as the Worcester Infant Mortality Reduction Task Force in the 1990s because of alarm over the number of infants who did not survive their first year.

Related: The 20 organizations that comprise the Worcester Healthy Baby Collaborative

The height of the crisis was about 10 years ago.

In 2014, the city’s rate was 6.7, local research found. Dr. Magee warns against reading too much into one-year figures that can be unduly influenced by chance.

That is close to triple the 7.6 rate of the Hispanic infant mortality in Boston that year. The Hispanic rate in Worcester has steadily declined since then through the three years ended in 2012, according to the state, but at 11.0 it remained higher than any other Hispanic community in Massachusetts. 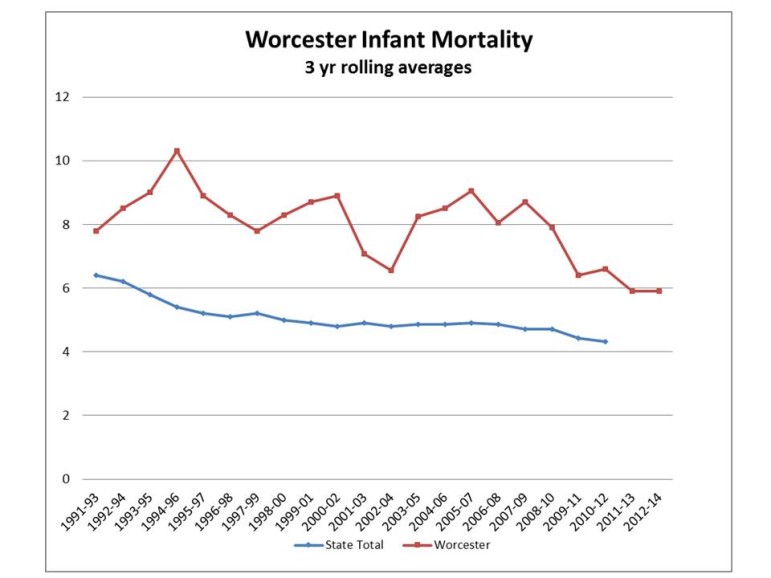 What could explain such a thing? There are theories galore.

But “nobody knows. It’s all opinion,” said Dr. B. Dale Magee. A former chairman of the Worcester Healthy Baby Collaborative, Magee recently retired from his obstetrics-gynecology practice in Shrewsbury as well as his position with the collaborative.

Although the state DPH has released no infant mortality figures beyond 2012, the Worcester collaborative has data for 2014 that indicate there were 16 deaths among the 2,400 live births in Worcester last year, a rate of 6.7 per 1,000.

Ten of the infant deaths were Hispanic.

Researchers are loath to use single-year rates because they can be skewed easily by just a few deaths. Instead, they roll the births and deaths of three years into a single rate for study purposes.

While the rolling averages are less dramatic, Worcester still had the highest infant mortality rate in the state seven times between 1992 and 2012, the most recent year for which the state publishes figures. 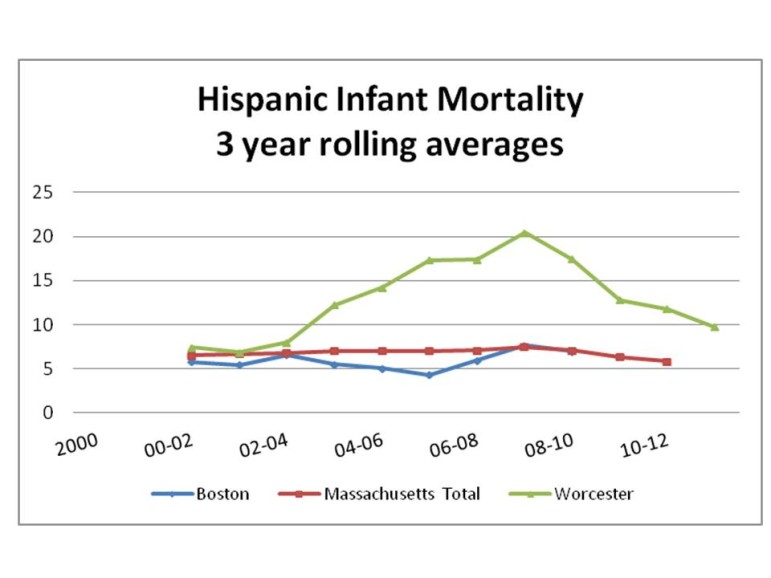 The good news is that the city’s infant mortality rate is falling from highs of a decade ago. The state Department of Public Health calculates the three-year rolling averages for the last three data periods were 8.0 in 2010, 6.4 in 2011 and 6.4 in 2012. That’s an improvement over 9.0, 8.1 and 8.8 for the three data periods prior.

One of the main ways that the infant mortality problem is being attacked is through the research of and strategies devised by the 20-organization collaborative, which also has a program designed to educate and empower Ghanaian women, called Nhyira Ba. The moniker is derived from an African name, meaning “blessed baby or child.” The program is primarily administered by Grace Williams, a registered nurse. 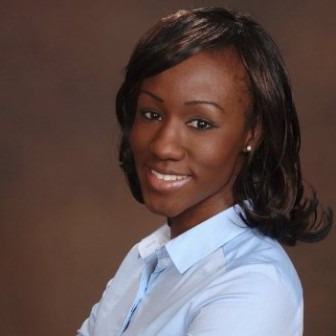 The WHBC educates Ghanaian women about good nutrition and healthy medical practices, according to Alexis Travis. Until stepping down recently, Travis had been part of the collaborative’s leadership team and director of program services for the New England chapter of March of Dimes.

Similarly yoga had to be removed from the program because some Ghanaian women have religious objections to it, said Travis, whose parents were born in Ghana but immigrated to Great Britain, where she was born.

Educating Ghanaian women is a balancing act. There is a need to meld Western good health practices with African customs and practices — not simply discard them, Travis said.

So, in cooking, the women are not forbidden to add Maggi cubes, which are too salty to be healthy for anyone, let alone a pregnant woman; but they are told not to add salt to a stew as well, for instance.

Travis said education is a two-way street, and Western health providers have much to learn from their African clients. Nhyira Ba takes doctors to Ghanaian restaurants in Worcester so they can be familiar with their clients’ food, and the mothers of pregnant Ghanaian women often move in with their daughters, becoming important counselors to them on baby care.

Ghanaians typically have high levels of education and employment and use of prenatal services, Travis said, all indicators of lower risk of infant mortality.

So why the high rate? “They have a great deal of stress,” said Travis, perhaps working two or three jobs that may be at lower levels than they had in Ghana, straining to send money to family in their homeland. Diet and exercise could be a factor, also.

“The truth is we still don’t entirely know,” she said.

And while the infant mortality rate is coming down among Ghanaians, it’s not time to fold the tent. “When you have intervention you need maintenance work.

She added, “With Latinos we see increasing numbers. Even if we’re starting to see improvements at macro level we need to see the (healthy baby) rate for a specific ethnic group increasing.

“We need to strive to have health equity for all.”

Magee, a former president of the Massachusetts and Worcester District medical societies, said there have been great strides in medical technology in reducing infant mortality, even among preterm, very low birth weight babies. But even with advanced science “a large percentage go unexplained,” he said.

“With Latinos we see increasing numbers. Even if we’re starting to see improvements at macro level we need to see the (healthy baby) rate for a specific ethnic group increasing. We need to strive to have health equity for all.” Alexis Travis

Because medicine can’t stop a woman in premature labor from delivering, society should “look at other things such as poverty, unstable housing, poor education, unmarried status, drug abuse, things that destabilize the home environment.”

Statistics show that better education is key to reducing infant mortality. Yet in Worcester a great percentage of Hispanics do not finish the school year in the same school where they started. Magee contends that that undermines a school’s ability to educate a student, and shows instability in the home.

Magee said he simply does not know why Worcester Latinos have a higher rate of infant mortality than Latinos in the rest of the state.

“I have a feeling there is something going on here that we don’t measure,” he said.

Hilda Ramirez said she is not surprised to learn of the poor figures in Worcester. She is assistant director of the Latino Education Institute at Worcester State University as well as a Worcester School Committee member.

While there is poverty among Hispanics in Boston, where she worked previously, she said there seemed to be more social programs in Boston, more awareness of the programs and better transportation so people can get to them.

“I have a feeling there is something going on here that we don’t measure.” Dr. B. Dale Magee.

Ramirez, who is of Dominican descent, said there is a high percentage of the Hispanic population in Springfield, for example, from Puerto Rico. Worcester’s demography is more diverse, coming also from South America, Central America, Mexico and the Caribbean. Being U.S. citizens, Puerto Ricans are more familiar with mainland systems and culture, she said. 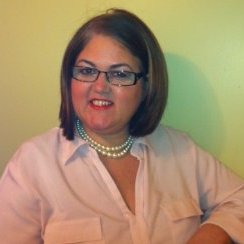 Derek Brindisi, Worcester’s former director of public health, said an infant mortality rate of about 15 per 1,000 live births for Hispanics does not show a lot of success in the efforts to combat the problem.

While it is true that poverty and education are factors, he said “it’s really about race.” He pointed to theories that a lifetime as a victim of racism causes stress that may result in high infant mortality.

Brindisi, who stepped down as health director in February, is town administrator in the Western Massachusetts town of Ashfield. Worcester Health Commissioner Michael Hirsh did not respond to requests for comment.

Brindisi also said that the end of federal funding for Worcester’s Healthy Start Initiative about four years ago cannot have helped.

Magee said agencies not already involved in the fight against infant mortality should join in the effort to improve lives through better housing, education and transportation for low-income people.

“Infant mortality is an early, sensitive indicator of things not going well in the community. You need to look at the totality of the community ‒ the stability of the home, food, education, everything that leads to a stable nest.”