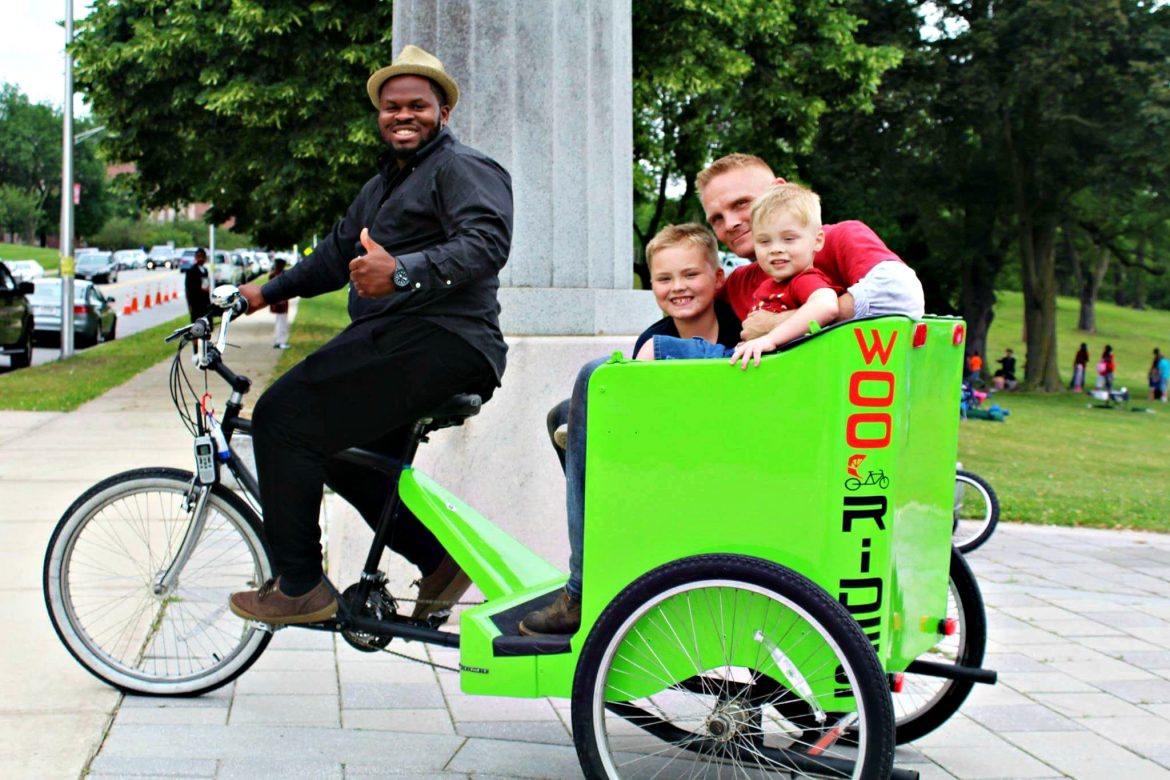 WooRides co-owner Valentine Beluchukwu gives a thumbs up as he takes customers on one of the startup company's first pedicab rides.

The race is on for local bike taxi companies to get the official “green light” from City Hall to hit Worcester streets this summer. But with the support of key city influencers, one enterprising firm appears to have a head start.

Otherwise known as “pedicabs,” these bicycle-towed taxis are aimed at the city’s high-traffic nightlife areas in hopes to help bar and restaurant hoppers beat the heat.

“I think [bike taxis] would be big for Worcester. Just being out and around, I think it would be easy to jump in an open-air cab to take you to the end of the street so you don’t have to move the car. They’re very popular in bigger cities, and I know they will be popular here — especially getting between the major nightlife areas,” said Jason Grayson, president of Worcester Pedal Bike Company.

Pedicabs are zero-emission transportation found in major U.S. cities like Boston, Chicago, Los Angeles and New York City, and across the globe.

It seems the time is now for New England’s second-largest city to put its pedal to the metal. Indeed, Grayson had been planning for months to launch his company, but a competitor beat him to the streets. 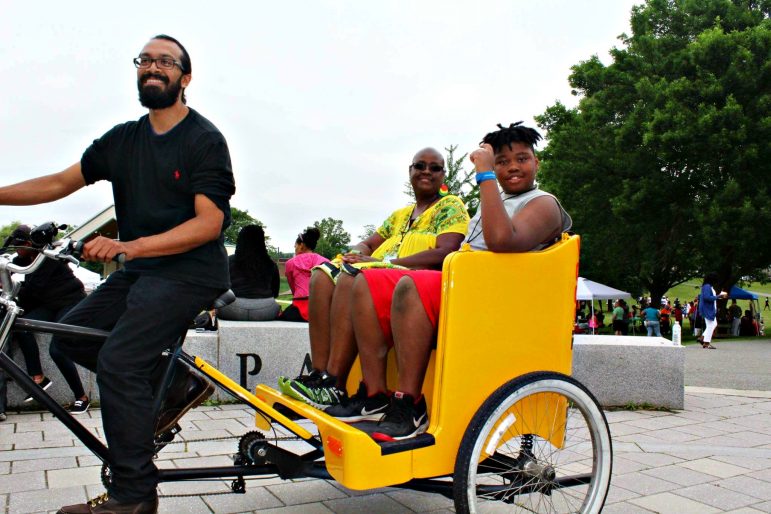 Shahbaz Soofi, WooRides owner, takes a pair of customers for a ride.

On June 20, city residents and visitors enjoying the annual Taste of Shrewsbury Street event had the opportunity to take a spin between participating hot spots on Restaurant Row in one of the pedicabs owned by WooRides.

A recent winner of the Worcester Regional Chamber of Commerce’s StartUp Worcester competition, WooRides, according to co-owner and WPI alum Shahbaz A. Soofi, was asked to attend Taste of Shrewsbury Street by organizer Paul Giorgio, who had taken a WooRides pedicab at the Black Heritage Juneteenth Festival June 17 at Institute Park.

“We were told to ‘be safe’ by a lieutenant in the police department,” Soofi said last week. “He said, ‘I can’t tell you not to do this. There’s no ordinance. Just be careful’.”

While City Hall officials worked with Worcester Police to draft regulations for the suddenly burgeoning industry, Grayson said he was advised by the Executive Office of Economic Development to wait until a comprehensive ordinance was in place before launching his company and accepting passengers.

Once Worcester Police and municipal leaders come to an agreement, the ordinance would still need to be approved by City Council. 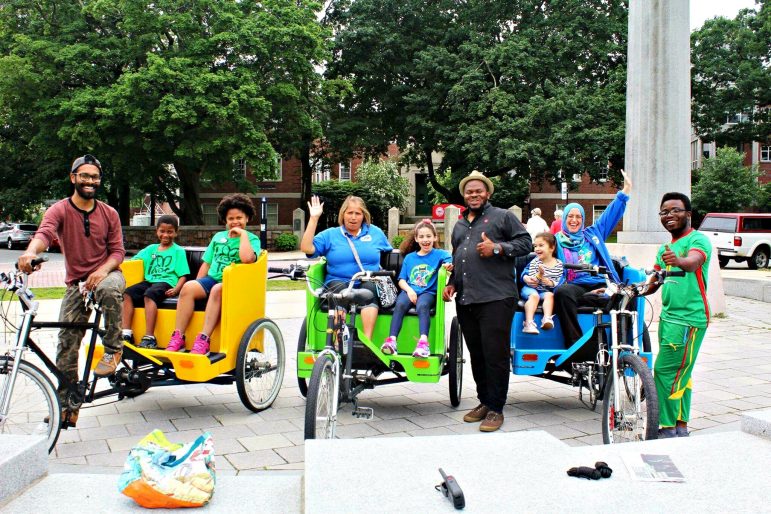 Ali Soofi, left, Valentine Beluchukwu and Yaovi Tsomana are three of the partners behind WooRides.

Stuart Loosemore, Worcester Regional Chamber of Commerce general counsel and director of government affairs and public policy, told the Sun June 23 that the chamber put WooRides in touch with Peter Dunn, city director of business and community development — a key member of the economic development office — and there were several discussions of how WooRides should operate without an ordinance in place.

“It’s a lot like when Uber and Lyft showed up in Worcester,” Loosemore said. “There’s no ordinance that regulates what you need. The city’s stance was that there’s nothing prohibiting you from doing it, just be careful, be safe, but know that the city is going to be putting a pedicab ordinance together.”

“As of now, no pedicab business has been sanctioned for operation within the city,” Worcester Police spokesman Sgt. Kerry Hazelhurst said in a statement. “Once completed, a potential business proposal will be forwarded to the City Administration for review. The Police Department’s focus is solely on the safe operation of this type of conveyance.”

Hazelhurst said police were aware of WooRides operating on June 20.

Soofi said WooRides is fiscally sponsored by Worcester Roots and is insured through that organization until WooRides obtains its own tax identification number. Soofi said any concerns he and his partners had about operating in the city were trumped by the support they received from City Manager Edward M. Augustus Jr.’s office.

“The city wasn’t concerned about it,” Soofi said. “There was only a little bit of hesitation on our part, but everyone was telling us that there was nothing stopping us from doing it. So you do what you can until the regulations come through and then you follow the regulations.” 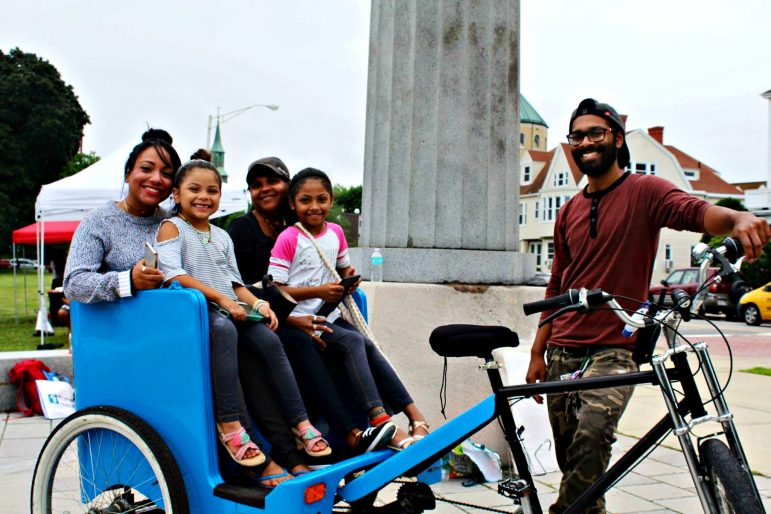 He added, “We’re looking forward to a greater reception from more people in the city. The folks in the City Manager’s office have told me they’re really excited about it.”

Both Grayson and Soofi said they’ve been told it may take up to a year for the city to finish its pedicab ordinance. Grayson told the Sun, as of now, he plans to wait for regulations to be finalized before he launches his operation.

“The first draft of an ordinance is still underway,” city spokesman John Hill wrote in an email statement last week. “A draft is being reviewed now, but [I] don’t have a timetable at this point. Nothing specifically preventing the regulations, they just haven’t been finalized yet.”

Requests for comment from the economic development office were unreturned.

Grayson, 38, studied clinical psychology at the University of Tennessee. He previously served as food and beverage director at the DCU Center and now owns and operates I Know A Guy Event Services in Worcester.

Soofi, 24, is originally from Southbridge, but has lived most of his life in Worcester. He formulated the idea for WooRides prior to his graduation from WPI as a sustainable energy, transportation-related cooperative.

He is one of six partners behind WooRides, including his brother, Ali, and mother, Imrana, who is director of Muslim Community Link and Black Seed Farmers Market. Josh Averett, Valentine Beluchukwu and Yaovi Tsomana are the other principals.

“It was a ripe opportunity,” Shahbaz Soofi said. “And by winning StartUp Worcester, it helped legitimize us.”

“[WooRides] were selected because it’s kind of a neat, unique business model. It’s another transportation option in a city where we are constantly looking at parking restrictions and requirements,” Loosemore said. “Here’s a business that doesn’t require parking spaces. It’s environmentally friendly, and it’s a budding startup business.”

As Grayson and Soofi wait for an ordinance to come together, Loosemore said the chamber will be ready to offer scrutiny when it does.

“Much like anything that comes out, the Chamber will certainly take a look at the ordinance and have comments or ideas about it based upon what we feel will be both positive and negative impacts on businesses like WooRides or other pedicab companies that may sprout up,” Loosemore said.