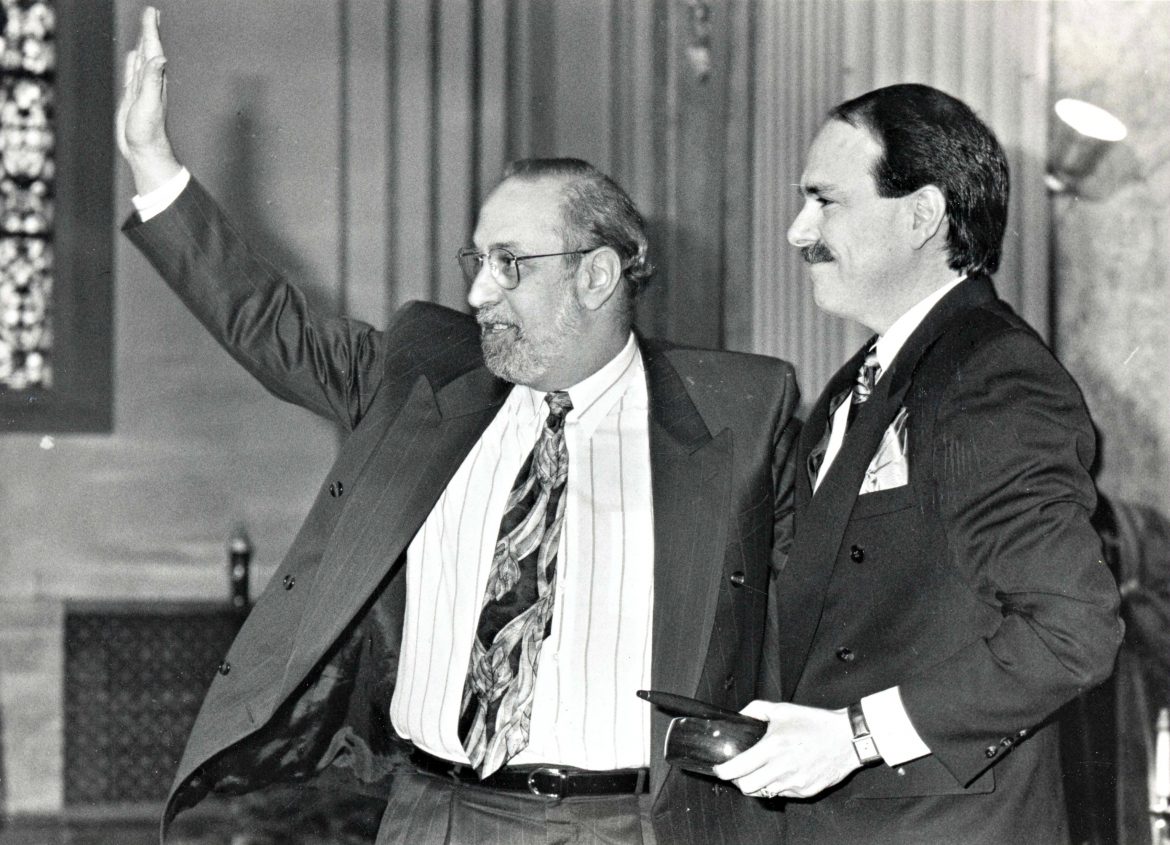 Jordan Levy and Ray Mariano in 1994 -- things were a little different for local politicians when these guys ran for office.

The first time I ran for public office was 1975. When I announced my candidacy for School Committee, I was 24 years old. Back then, local elections were vigorously contested. That year, there were 44 candidates for the nine available at-large City Council seats and 18 candidates for six seats on the School Committee.

The preliminary and final election campaigns were an enthusiastic mess. There were candidate forums in almost every neighborhood. Candidates spent anywhere from six months to a year campaigning across the city – most campaigned seven days a week. Every neighborhood civic club and veterans post had a parade of candidates regularly dropping by to seek support.

If you went to Water Street to buy bagels on a Sunday morning, there would be a gauntlet of candidates waiting to shake your hand on your way into Lederman’s or Widoff’s bakeries. The same was true for people who attended bingo, church and ethnic festivals, and just about every other public activity and event. Candidates were everywhere.

In those days, candidates and their supporters took everything very seriously. I can remember opposing candidates and supporters having to be separated from each other to avoid fistfights. At one event, if my memory serves me, City Council candidates Jordan Levy and Joe Casdin almost came to blows. The passion and enthusiasm were palpable!

Today, local elections are a snoozefest.

Along with fewer candidates seeking office, voter participation in local elections has dropped to about 10 percent of those registered.With so few people running for office, it hardly seems worth the cost and the effort to hold the election. Maybe they could just draw straws. 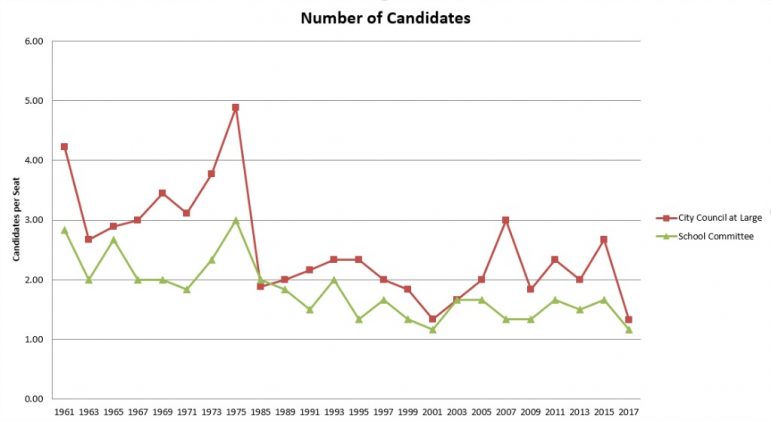 Interest in the School Committee is even worse. During those same 11 potential elections, not a single year produced enough candidates for a runoff. In five of those years, only seven or eight candidates’ names were on the final election ballot to fill six positions.

So what happened? Why are so few people interested in running for local office?

According to former Mayor Jordan Levy, “People no longer see politics as public service.” Levy pointed out that politics had become “a gotcha game” where colleagues who normally played by a certain set of rules of propriety are now “more interested in personal destruction than getting things done for the community.”

Another former mayor, Tim Murray, a generation younger than Levy, cited the significant time commitment placed on elected officials. He emphasized the lack of civility and the impact of social media as reasons that people decline to run for office.

Of course, the reasons why people shy away from seeking local public office are many; here are those I think are most common. 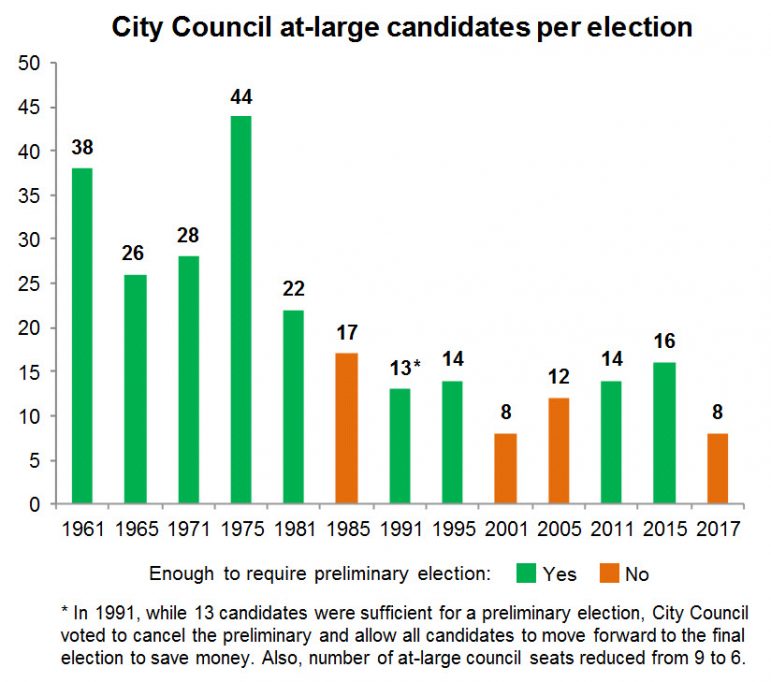 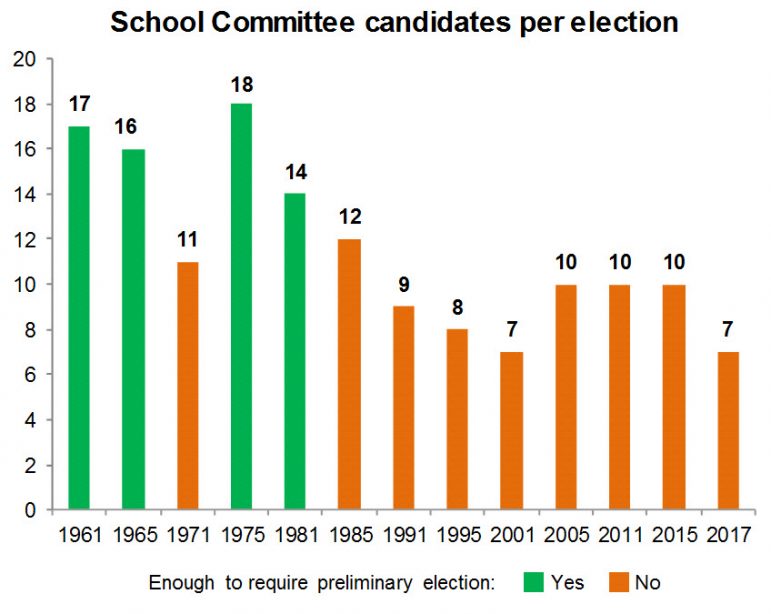 Millennial mobility.  I asked a group of young people, 25 to 35 years old, all of whom are politically engaged, what would stop them from running for local office.

Most of the respondents pointed out that young people today are much more mobile than their parents and grandparents. In decades past, young people grew up and then settled in the same city or town as their parents. But today, millennials are more likely to go away to college and then stay away after graduation. It is not uncommon for them to move again in a few years.

The mobility of young people makes running for local office highly unlikely. When a young person, who has grown up in a community, decides to run for public office, they can rely on family, friends and classmates to encourage them and support their campaign. That support is typically not available when you move to a new community.

Even those who settle into a new community shortly after college or graduate school say that it takes years before they can feel comfortable enough to even consider running for an office and representing their neighbors.

It is not the pay!  Yes, I realize that when you figure it out on an hourly basis, the amount of pay that a local elected official receives is not very much. But, in 1975 when I first ran for office, School Committee members were not paid a dime and we had plenty of highly qualified candidates.

The City Council substantially increased its pay and the pay of the School Committee in 2008 with the stated hope that it would encourage more people to seek local office. It did not work.

It takes an enormous time commitment. Mounting a successful campaign takes a great deal of time and energy – not to mention personal sacrifice. Then, if you are fortunate enough to win, it will take equally as much time to serve.

A good elected official is on call 24 hours a day, seven days a week. There is no getting away from the job. It is not just the hours at work, but also the hours away from your family – especially nights and weekends.

When I was mayor, I would try to sneak home for supper. After I gobbled down my food, my wife often had one of our three children dressed and ready to head out with me. They brought a book, a doll or another toy with them to play with while dad was talking to one group or another.

Respect for the office has diminished.  For a host of reasons, there is less respect for people who hold public office. When I started out, even if people disagreed with you and would never vote for you, an elected official was often treated with a certain level of respect. Today, you are more likely to be called a “political hack” or a “corrupt politician” by people you have not even met and who know little or nothing about you.

In years past, the respect for the office was an attraction for people willing to devote the time to public service. Without that respect, there is less reason to run.

Lack of neighborhood stability.  In the past, everyone knew almost everyone else in a neighborhood. Community meetings were as much a social event as anything else. These tight-knit neighborhoods generated candidates who were well-versed in neighborhood issues and who could then count on their neighbors to campaign and vote for them.

As millennials leave a neighborhood, they are replaced by newcomers. These newcomers do not know their new neighbors. They have not lived there for decades and gone to local neighborhood schools and churches. Generally, they are less committed to that neighborhood.

Beyond that, today, everyone is busy and few have the time or the inclination to get to know their neighbors. The number of neighborhood groups and civic associations is only a tiny fraction of what they once were. People interested in running for office no longer can count on a solid “base” of support from people who live near them. Facing a citywide campaign without a neighborhood base makes a campaign a bit more difficult.

It is an invasion of your personal life.  The personal lives of candidates used to be off-limits. If a local public official wanted to keep his or her personal life private, to some extent, they could. Today, that is almost impossible. Social media makes any degree of privacy virtually impossible.

Given all of the reasons stated here, you might ask: Why would anyone want to serve on the City Council or School Committee?

Looking back, even with all of the challenges, I have to say that it was more than worth it. I am certain that Jordan Levy, Tim Murray and all the others who have served our community would say the same thing.

For me, a kid who grew up in public housing, went to public schools and attended a public college, the opportunity to repay my debt to my community, through public service, was very important. Serving my community was an incredible honor.

3 thoughts on “Mariano: Why no one wants to run for local office”