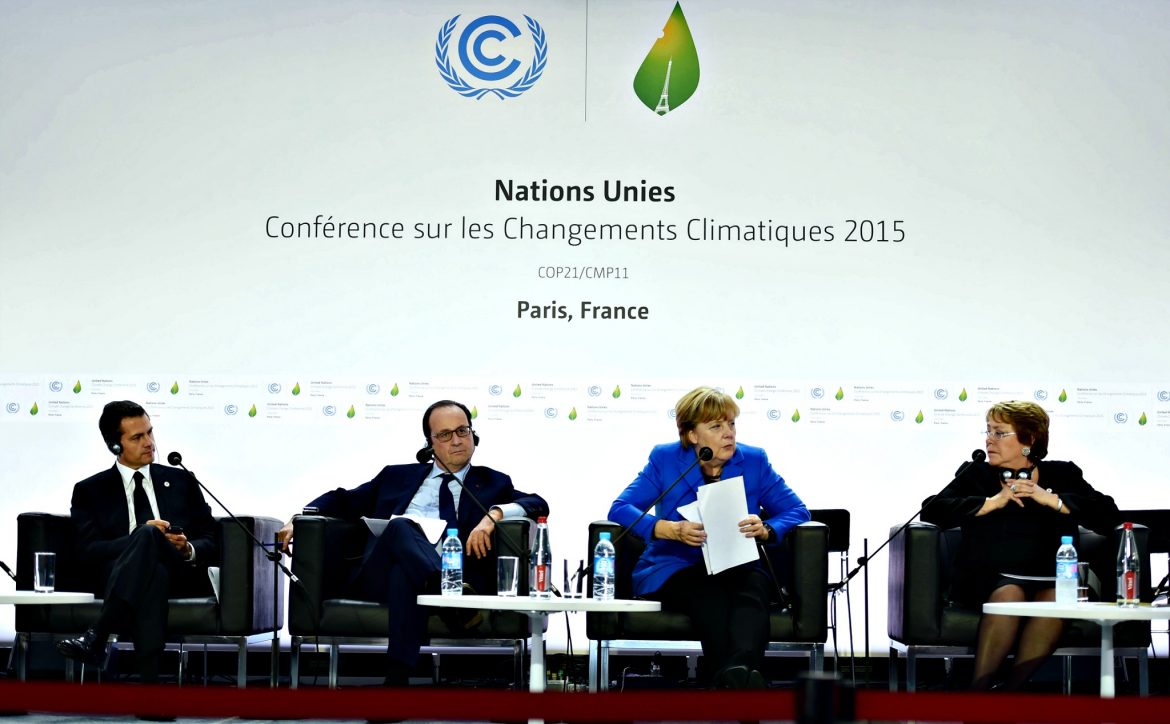 World leaders gathered in late 2015 to draft what became the Paris Climate Agreement.

Sadly, the media doesn’t focus on the science at all, but almost exclusively on the politics of climate.

Much ink has been spilled and many BTUs of hot air generated since President Trump announced on May 25 that the United States will pull out of the Paris climate accord, but it wasn’t until Worcester Mayor Joseph M. Petty declared his support for the deal — joining dozens of other mayors nationwide — that I realized just how ridiculous the whole thing is.

Look, there is plenty of evidence that climate change, or global warming (or whatever term is in vogue this week) is taking place. I don’t want the Earth’s flora and fauna to die. I have nothing against residents of the Netherlands, 47 percent of whom are threatened by rising sea levels. And while I’ve never been to the South Pacific, I hope the low-lying island nations there do not sink beneath the waves.

But the Paris climate deal was never going to save the planet — and never will — regardless of what the United States does.

As you’ll soon see if you try to read the text, the Paris accord drowns in oceans of meaningless prose. Counting the title and explanatory notes, it takes 16,616 words to say what I can summarize in six: Things are bad, and getting worse.

My journalistic genes usually demand I read every word of whatever it is I am writing about, but I confess that this time I engaged in genetic self-engineering, suppressed the gene, and read only until waves of nausea threatened to ruin my breakfast. I mean, 16,616 words is nearly six months of these columns, and I’m not as young as I was when I started reading the darn thing.

The first sign that this agreement isn’t worth bothering about is the fact that 195 of the world’s 197 sovereign nations agreed to it. If the leaders of North Korea can set aside their paranoia long enough to ink the document, what value can it possibly have?

As Wikipedia says, “… the Paris Agreement, with its emphasis on consensus-building, allows for voluntary and nationally determined targets. The specific climate goals are thus politically encouraged, rather than legally bound …”

Now any student of history knows that voluntary international agreements, including feel-good, unverifiable and unenforceable deals like the Paris accord, usually end badly. But what makes this one a certifiable stinker is that the agreement itself admits it cannot work on its own.

Here’s the relevant language from Paragraph 17, where the accord “… notes with concern that the estimated aggregate greenhouse gas emission levels in 2025 and 2030 resulting from the intended nationally determined contributions do not fall within least-cost 2 degrees Celsius scenarios but rather lead to a projected level of 55 gigatons in 2030, and also notes that much greater emission reduction efforts will be required …”

[Editor’s note: 2 degrees Celsius refers to the goal of limiting global warming to no more than temperatures of 2 degrees Celsius above pre-industrial levels. A gigaton is one billion tons, in this case of greenhouse gas emissions.]

Sadly, the media doesn’t focus on the science at all, but almost exclusively on the politics of climate. So you have probably heard Trump’s declaration that “I was elected to represent the citizens of Pittsburgh, not Paris,” and Steel City Mayor Bill Peduto’s response, told to CNN’s Wolf Blitzer, that his city will follow through on its carbon reduction goals anyway.

And you’ll have heard Petty’s “me too” declaration, as echoed by the presidents of Clark University and the College of the Holy Cross.

But such statements make no difference. It’s all well and good for Worcester and private colleges to push green technology, but markets and consumers decide whether such technology is adopted.

Related Sina-cism: The word on Trumpian truths from Assumption

As Humphrey Bogart said to Ingrid Bergman in “Casablanca,” knowing full well their relationship was at an end, “We’ll always have Paris.”

Well, cherish or lament Paris as you will, but understand that it means little.

If you really want to save the world, you need to continue research and development of new energy technologies. You need to continue to supplant coal with natural gas, as the United States has succeeded in doing for years. And you really need to take another look at the case for nuclear energy as a moral imperative, as laid out by Gwyneth Cravens.

Did the Paris agreement express the last, best hopes for the long-term survival of Earth? Perhaps. But signing on to hopes and dreams is easy. Solving the planet’s energy challenges is much harder, and is much more likely to happen through science than politics.

From the archives: Hey Paris, we’ll always have science