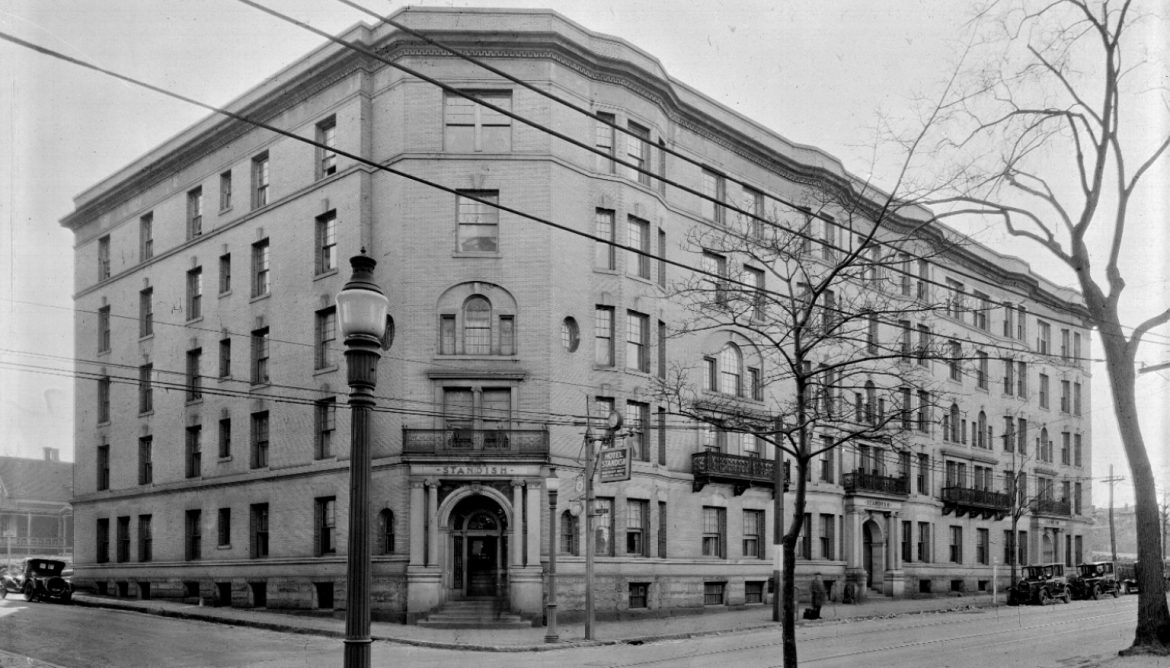 The Standish Hotel, at the corner of Jackson and Main streets, holds a significant place in literary history.

While there is much historical information about Freud’s visit, fiction has a role, as author Tim O’Brien puts it, “… for getting at the truth when the truth isn’t sufficient for the truth.”

There’s nothing like encountering a reference to Worcester in a novel or film. There’s that flash of recognition of the places, people and events the author is describing. It can be a way of discovering something new about one’s native place through the eyes of an outsider.

The 2013 crime drama “American Hustle” offered that, with its scenes outside Union Station, inside the Worcester Art Museum and along Millbury Street.

Another work that references Worcester — less well known, perhaps, but of greater importance — is “The White Hotel,” a 1981 novel by D.M. Thomas. It begins with a series of fictitious letters, the first by Hungarian psychoanalyst Sándor Ferenczi, who accompanied Sigmund Freud on his 1909 visit to the United States and attended his colleague’s lectures at Clark University.

The letter is headed “Standish Hotel, Worcester, Massachusetts, U.S.A. 8 September 1909,” and is addressed to Ferenczi’s wife. He tells her how “Brill and Hall are excellent fellows, and everyone at Clark University has overwhelmed us with kindness and compliments. Freud astonished even me with his masterly skill, by delivering five lectures without any notes …”

For insight into Freud’s 1909 visit, this is a promising start.

A.A. Brill and Clark President G. Stanley Hall were important academic figures who helped boost Freud’s reputation and career. While there is much historical information about Freud’s visit, fiction has a role, as author Tim O’Brien puts it, “… for getting at the truth when the truth isn’t sufficient for the truth.”

Alas, the remainder of Thomas’ novel contains nothing about Worcester.

There was a Standish Hotel in the city, as you can see in this image from the Worcester Historical Museum. Or drive down Main Street toward Clark and, on the left and just past the intersection with Jackson Street, you can see a five-story apartment block that is what remains of the original hotel.

The Standish plays no further role in the novel, and the “white hotel” of the title is not modeled on it. But the absence of Worcester references is no great failing. “The White Hotel” is a fascinating blend of eroticism, psychoanalysis, history and horror. Some critics (see this 1986 Cal Tech paper for one example) rank it among the finest novels of the 20th century.

If so, Thomas’ work was not without controversy. Critics also noted that portions dealing with a vision of the Holocaust strongly resemble passages from Anatoli Kuznetsov’s work on Babi Yar. Thomas denied plagiarism, arguing that he used Kuznetsov’s material in a postmodern fashion.

Be all that as it may, the “The White Hotel” certainly held my interest, and got me thinking about Freud and his legacy.

It is impossible to overstate Freud’s importance to the understanding of human consciousness, including his pioneering work in developing talk therapy for the treatment of various mental disorders. At the same time, there is now widespread recognition that he was wrong on many points.

I might add that in college I read Freud’s “The Future of an Illusion,” in which he dismisses religion. It seemed to me then and ever since terribly misguided, offering an unpersuasive account of religion’s origin, and failing to account for the persistence and value of religion worldwide.

But my plunge into Thomas’ novel did lead me to another fact about Freud and his colleagues.

Among the attendees at those 1909 Clark lectures was James Jackson Putnam, a Harvard professor, a leading American neurologist, and a co-founder in 1911 of the American Psychoanalytical Association.

Following the Clark lectures, Putnam invited Freud — along with Carl Jung and Ferenczi — to visit Camp Putnam in upstate New York, where they spent several days and developed a lasting friendship.

“There are obvious limits to its usefulness,” Putnam would write of Freud and his theories a year later, “but nevertheless it strikes deeper than any other method now known to psychiatry …”

Perhaps that is a fair assessment of Thomas’ novel, as well. For all its difficulty and controversy, it has enduring value as an exploration of human consciousness and the meaning of life.

And it will remind readers for years to come of the important roles that Clark University, Freud, and the city of Worcester played in the development of modern psychology.