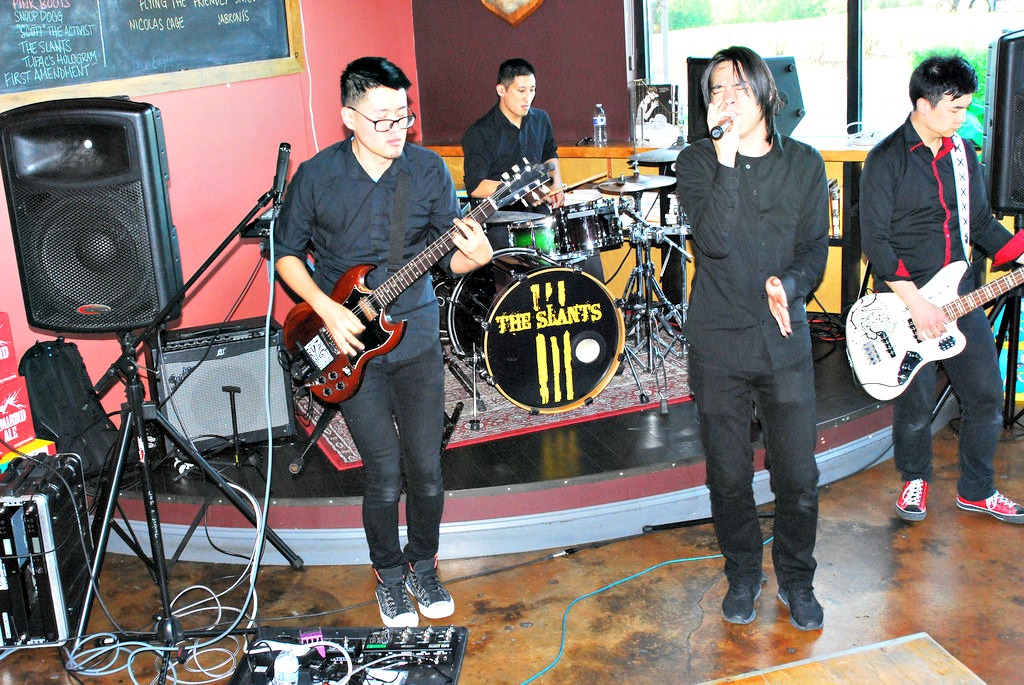 The Slants, performing in April.

Although the First Amendment may be back in vogue at The New York Times, at least for now, not everyone agrees with Matal v. Tam.

Last Monday was a very good day for the First Amendment. In Matal v. Tam, the U.S. Supreme Court ruled unanimously that the disparagement clause of the Trademark Act of 1946 is unconstitutional.

The case involved Simon Young, aka Simon Tam, the 36-year-old lead singer of “The Slants,” an all-Asian-American band whose members chose their name as expressive of three things — their views on life, their music, and their desire to reclaim and empower a phrase traditionally seen as derogatory.

After the U.S. Trademark and Patent Office sought to deny the band a trademark on the grounds that its chosen name was offensive, Tam went to federal court and won on appeal. The Supreme Court ruling affirmed that decision.

In the December 2015 appeals court ruling, Judge Kimberly A. Moore wrote: “It is a bedrock principle underlying the First Amendment that the government may not penalize private speech merely because it disapproves of the message it conveys.”

In the minds of activists and their lawyers, of course, there are always other considerations, including the idea that trademarks are government speech.

But if that’s true, Justice Samuel Alito wrote, “the Federal Government is babbling prodigiously and incoherently. It is saying many unseemly things. It is expressing contradictory views. It is unashamedly endorsing a vast array of commercial products and services.”

The ruling almost certainly means that the NFL’s Washington Redskins will prevail in its legal fight to reverse the USTPO ruling that invalidated its trademarks on “Redskins.”

But whether Redskins or other such controversial names remain in use is another matter, to be decided by public opinion as to what is commercially, socially and politically acceptable.

Here in Massachusetts, lawmakers are now considering a bill that would ban the use of Native American school mascots. Most recently, the issue flared in Tewksbury, where residents rejected an effort to change the high school’s “Redmen” mascot.

While a state ban on Native American mascots is legally distinct from a federal refusal to issue trademarks, Massachusetts lawmakers should read Matal v. Tam. The issue is much broader than whether some Native Americans are offended. Almost any nickname worth using is probably offensive to someone, somewhere, for some reason. This is why we have free speech to begin with — literally as the First Amendment.

This much is certain: The day we remove the last reference to native peoples from the last pee-wee hockey team in a remote burg in the Berkshires, someone is going to complain that there is not a single school or team honoring the proud native peoples of Massachusetts.

I note in passing the nearly unanimous approval that Matal v. Tam has received from major opinion shapers. The New York Times editorial board, which only in 2014 opined that “Slurs Don’t Deserve Trademark Protection,” declared “We still regard the Redskins name as offensive. Based on this case, however, we’ve since reconsidered our underlying position.”

Although the First Amendment may be back in vogue in Manhattan, at least for now, not everyone agrees with Matal v. Tam.

Elizabeth King, a principal at Sutton McAughan Deaver PLLC, told worldtrademarkreview.com that the Court wrongfully dismissed the notion of trademarks as a federal subsidy, and that the ruling “is going to do tremendous damage to minorities, women, the oppressed of all backgrounds and, of course, most urgently the Native American community in the Redskins case.”

In fact, Alito and the other Supreme Court justices tackled and correctly disposed of the subsidy argument. And would any potential harm outweigh the harm to the First Amendment if the Court had ruled otherwise?

In my opinion, the Court in Matal v. Tam was correct not merely in a narrow, legalistic sense. This is not a situation where we should grudgingly accept the legal reasoning while lamenting the practical effect.

We should cheer this ruling, which reaffirms that we Americans are stuck with freedom. Civility, good taste and tolerance will have to see us through. We will have to talk to one another. Ultimately, neither courts nor politics can save us from ourselves.

As Justice Anthony Kennedy wrote in his concurrence:

“A law that can be directed against speech found offensive to some portion of the public can be turned against minority and dissenting views to the detriment of all. The First Amendment does not entrust that power to the government’s benevolence. Instead, our reliance must be on the substantial safeguards of free and open discussion in a democratic society.”

Americans — Native, Asian, whatever — neither want nor need a Ministry of Truth. We can handle this ourselves.