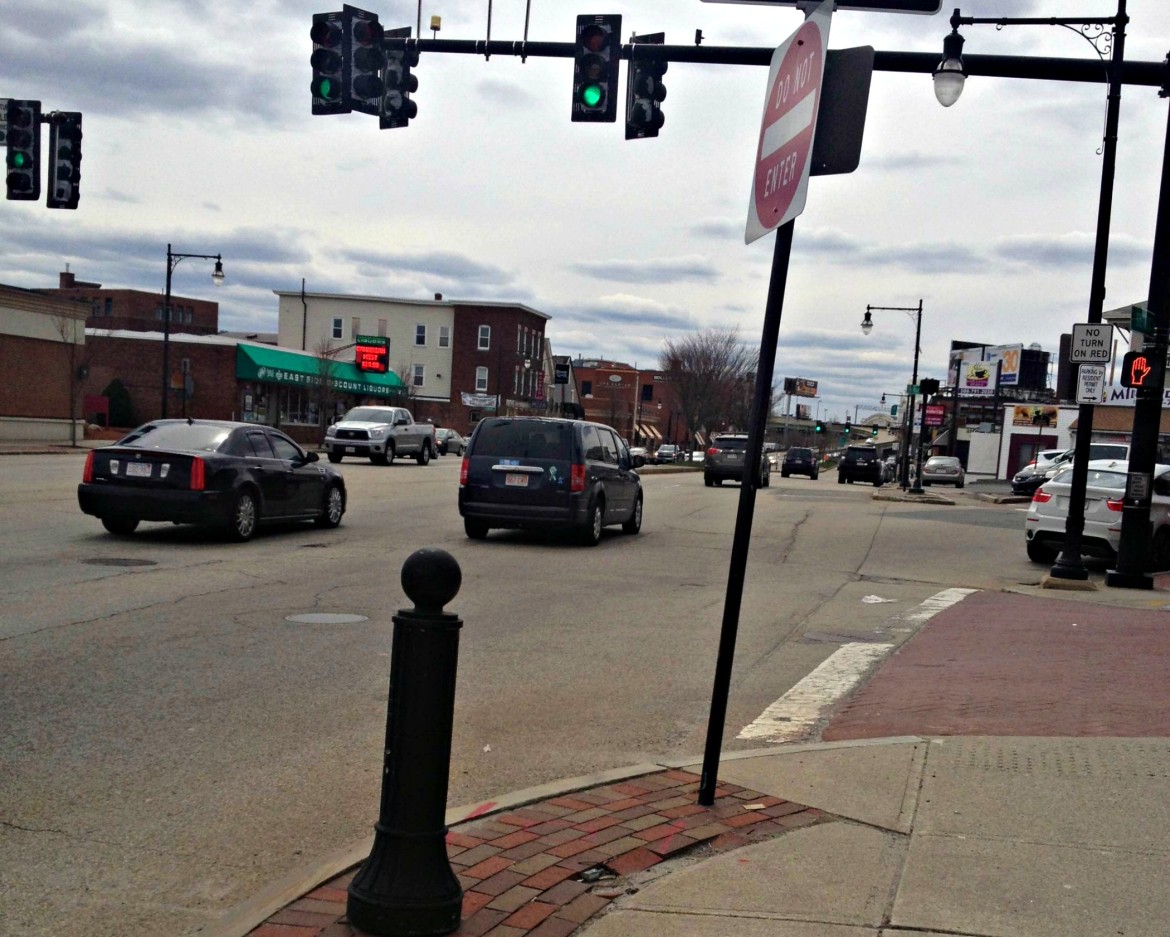 Where Cross, East Central and Shamrock streets meet Shrewsbury -- cross at your own risk.

Streets that are as safe as they can be for drivers and pedestrians is an obvious and important goal for any community.

Not so obvious is how best to achieve this.

Reducing the citywide speed limit to 25 miles per hour — a measure the City Council mulled last week — is one way to proceed. But we question whether that would be a truly effective route toward better safety.

The idea is allowable under the broad Municipal Modernization Act, enacted last year. The legislation allows cities and towns in Massachusetts to establish a 25 mph speed limit on roads that are not state highways and that lie within thickly settled or business districts.

Municipalities may also, if they choose, designate “safety zones” on such roads, with a posted speed limit of 20 miles per hour.

At the suggestion of Councilor-at-large Kathleen M. Toomey, chairperson of the City Council’s Public Safety Committee, the council at its July 18 meeting asked the city administration to study lowering the citywide speed limit. The idea has already been adopted by Boston and several other municipalities. Springfield jumped on the 25-mph bandwagon last week.

First, a clarification is in order, as the term “citywide” speed limit can be misleading. A 25 mph city speed limit means that roads not otherwise designated with speed limit signs would have a speed limit of 25 mph. These are generally roads through residential neighborhoods and some business-heavy sections of the city.

Second, a question: Raise your hand (not while you’re driving) if you know what the citywide speed limit currently is in Worcester. It’s 30 mph — the kind of fact we all should know, of course, but more importantly, the kind of careful, moderate speed we all know we should not be exceeding when in thickly settled areas, or in commercial stretches with traffic tending to dart in and out.

Lowering the citywide speed limit from 30 mph to 25 mph is probably worthy of study. Publicity from the measure might raise awareness for a while about our responsibilities behind the wheel. Conscientious drivers might indeed drive a little slower — 5 miles per hour slower — than they did before, thus reducing the risk of accidents and injury in areas where children play, and people live and work.

We suspect, though, that unless traffic rule enforcement were to increase once the speed limit went down, the change would make little difference in how safe our roads actually are.

Clearly — and this bears repeating and remembering — the most important safety factor is people. Our personal commitments to alertness, caution, respect for others, freedom from distraction, and following the law work a collective wonder in helping counteract the dangers inherent in being out on the roads and sidewalks.

And then there are smart measures that physically alter the streets (speed bumps, turn lanes and the like); or improve the flow of traffic, such as through-traffic light synchronization, pedestrian signals and helpful signage. Many Worcester thoroughfares work well in perhaps scarcely noticeable ways because of the thought and foresight of urban planners and engineers.

We would urge the city to put more trust and effort in targeted street improvements to address safety issues, particularly at tough traffic spots in the city. Speed limits and other restrictions — and enforcement of them — are keys parts of the picture, too. And rules should be reasonable. Drivers tend to more readily obey speed limits that make sense for the spot they’re in.

Toomey said she raised the idea of lowering the citywide speed limit from 30 mph to 25 mph because constituents have been complaining of speeders on residential streets. (Of course, skeptics would say this has the strong and familiar aroma of a certified Election Season Issue®.) Nonetheless, residents are pointing out what can be a serious problem, and one that seems to worsen at this time of the year.

We urge Worcester police to step up patrols and ticketing on residential side streets when possible, particularly where residents have reported problems with motorists going too fast.

“Everybody’s mad blind,” Jose Antonio told the Telegram & Gazette about drivers on Belmont Street, near Memorial Hospital. Those drivers have helped make the street among the most harrowing in the city — and the state — to cross.

The article referenced an eye-opening new report indicating that Worcester is the most dangerous city in Massachusetts for pedestrians.

The report, released by Boston law firm Sweeney Merrigan, analyzed data on crashes involving pedestrians from 2001 to 2014. It found that the state has 496 intersections at which five or more pedestrian accidents occurred in that 13-year period. Worcester, where 50 of those danger spots are located, had more intersections on the list than any other city or town in Massachusetts.

The report ranked the intersection of Belmont and Edward streets the most dangerous in Worcester, and the seventh most dangerous in the state between 2001 and 2014. Downtown on Main Street, between Hermon and Exchange streets, is another area for pedestrians to beware; as are stretches of Grafton Street, Pleasant Street, Park Avenue, Highland Street and Vernon Street, according to the report.

We can do better.

Still, we say to the city: Not so fast on the proposed speed-limit change. There are better ways we can do better.

Officials must focus on improving traffic safety using their most effective tools: street and signalization improvements, enhanced public awareness, and enforcement of existing speed limits and other regulations.

Safety on the streets is a complex issue requiring a range of approaches. If the city deems that changing the speed limit from 30 mph to 25 mph on residential streets and some commercial stretches will be worthwhile, we’ll be fine with that. We just don’t expect it to make that much of a difference.

Drivers, meanwhile, would be well advised to slow down a notch on their own — wherever they are. No hurry to get somewhere matters more than hurting someone else, or yourself, in an accident.