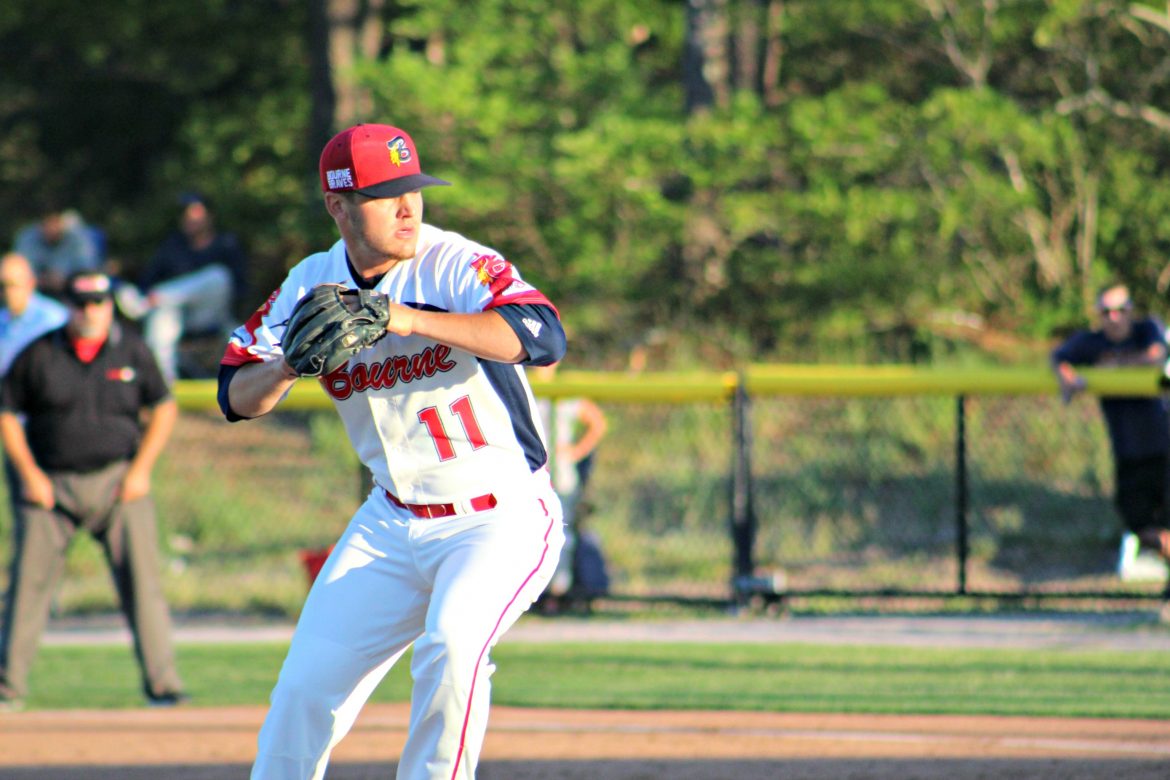 Nick Johnson, now featuring a 93-mile per hour fastball, is a key member of the Bourne Braves pitching staff.

Worcester native Nick Johnson has big-league dreams, so the soon-to-be 22-year-old is taking the next step in order to further his baseball career.

Johnson, a rising senior at the University of Rhode Island, has climbed to the highest rung on the summer ball circuit, pitching in the Cape Cod Baseball League for the Bourne Braves.

“It’s definitely a privilege to be down here,” Johnson said last week in an interview at Wareham’s Spillane Field. “Growing up, I used to come down here and watch these guys play. It was always a goal of mine to be here.”

Johnson, 6-foot-3 and 205 pounds, had a similar experience last summer, pitching for the Ocean State Waves — and being named a midseason all-star — of the New England Collegiate Baseball League. 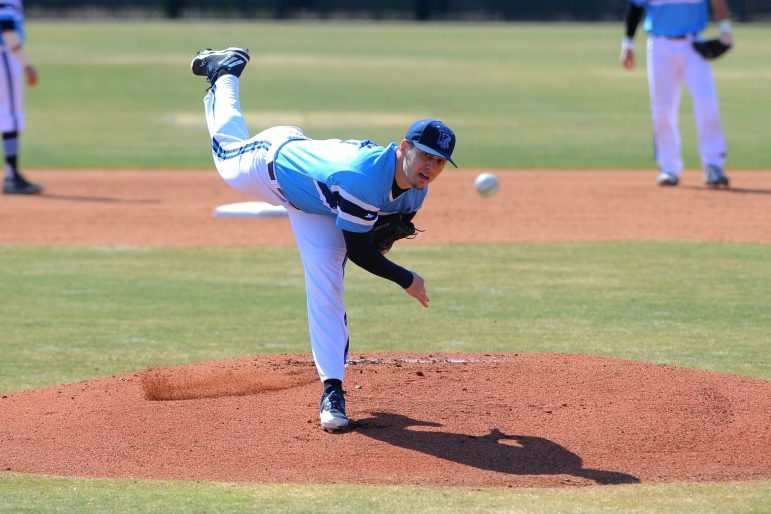 Nick Johnson, who played baseball and football at Worcester Academy, was a weekend starter for Rhode Island this past season.

The biggest difference between the leagues, however, is the skill level. Most of the players who are on Cape League teams end up being drafted by a Major League team and playing professional baseball. In contrast, typically a handful of players from the NECBL are drafted each year.

“It’s kind of like moving up the ranks,” Johnson said of playing for a Cape League team this summer. “You talk about moving up the ranks of the minor leagues to the big leagues and that’s how I see it. It’s about the highest you can be for collegiate summer ball.”

Johnson was listed sixth among the Atlantic 10 conference’s top MLB draft prospects by Baseball America prior to his junior season this past spring at Rhode Island.

Albeit the league gives Johnson an opportunity to further showcase his ability in front of pro scouts, playing on the Cape also gives him the chance to improve his game and continue developing as a ballplayer.

“I’m just out here trying to master all the tools that I have in my toolbox,” he said. “I’m going out there and getting live innings. I’m using all my pitches and trying to work on the command.”

In order to limit his innings this summer, Johnson has been pitching in relief. The primary reason is not necessarily because he prefers relieving games. Instead, it is simply because every pitcher in the league is on an innings limit and does not want to be overworked, since that risks an injury.

“You’ve got to be selfish in a way so you don’t injure yourself, since your primary focus is school,” he said. “You’ve got to stay healthy.”

In five outings (through July 7) for the Bourne Braves, Johnson had a 3.85 ERA over 9.1 innings. In that span, he struck out 10 men and walked only two batters. 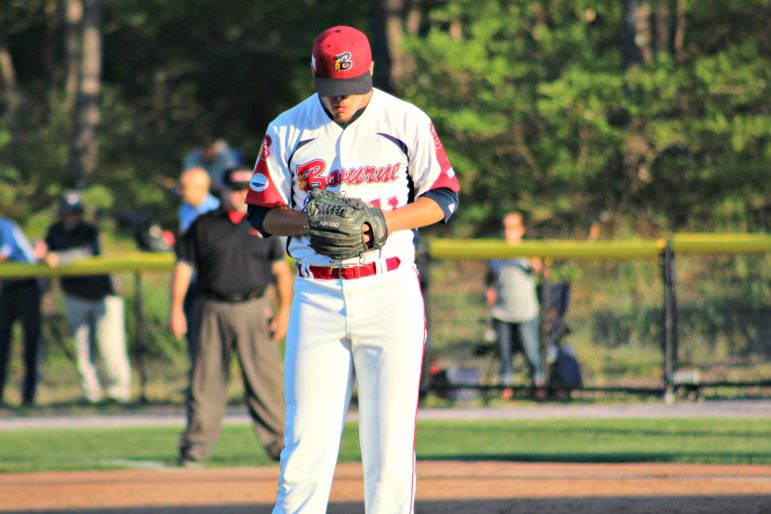 This past season at URI, Johnson took on a bigger role. He went from being a valued member of his team’s bullpen in 2016 to being a weekend starting pitcher in 2017. In all, he made 16 outings, including 10 starts, and struck out 61 batters in 62.2 innings.

“It was nice to be in a routine every day,” he said of being one of the Rams’ two top starting pitchers all season. “You’ve got a set schedule of what you’re doing days one through six and then you’re starting on the seventh day. It was good to be one of the guys who people looked up to for leadership, too.”

It was not the first time Johnson stepped up his game and got a bigger role at school. A seldom-used reliever as a freshman, Johnson worked hard to improve his fastball velocity from 85 mph to 93 mph going into his sophomore year so that he could earn a regular role on the staff.

“Probably a little kick in the butt,” he said of why he focused on trying to improve his velocity. “I just had a little bit of motivation on the field and off the field to get better. I was working harder and trying to get better every day.”

Specifically, Johnson said it was a mix of weight training, conditioning and baseball specific training that allowed him to throw harder.

Jim Sauro, Johnson’s coach last summer with the Ocean State Waves, was not surprised by Johnson’s unrelenting attitude. He told ESPN Boston last August, “He has that football mentality because he played football at Worcester Academy.

“When you play 50 games in the summer, in the hot sun, he never complains,” Sauro said. “He always does his running and is tough as nails. He’s a bulldog.”

In the next year, Johnson said there are more steps he wants to take in moving his career forward.

“The goal is to sign as a senior after the spring,” he said, in reference to next year’s MLB Draft. “Of course I’m going to go into the offseason and train as hard as I can.

“The other goal is going to be to make it to the Atlantic 10 tournament again and come back with a vengeance,” he added.

Despite giving up a first-inning, two-run home run, Johnson pitched well (5 innings, 2 runs, 3 strikeouts, 1 walk) in the Rams’ 4-2 playoff loss to St. Louis in the third round of the A-10 tournament in May. URI was 31-22 last season, including 17-6 in the conference. 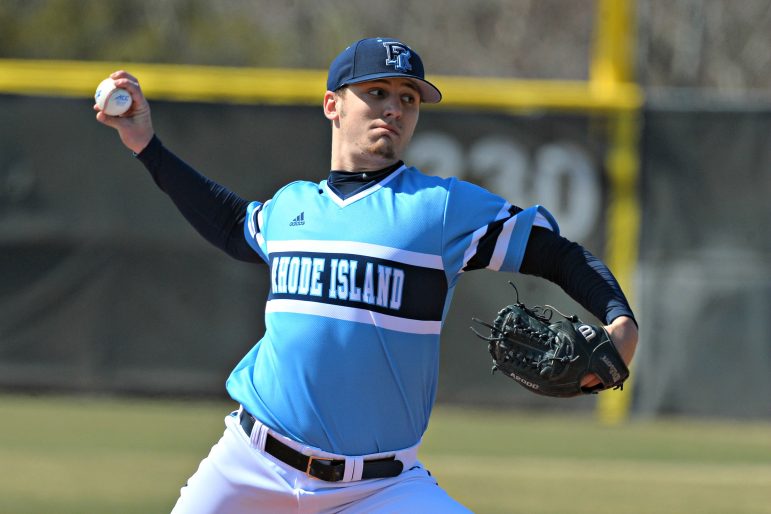 Johnson struck out 61 batters in 62 innings for the Rams.

“It’s a strong group of guys. We went through a lot on and off the field and behind the scenes. … For what we did, we were proud of it. And next year, it’s looking very promising for us.”

Off the field, tragedy struck Johnson’s life in January when his mother, Angela Demake, died at 52 after a battle with cancer.

Demake was the daughter of Frank and Joanne Prizio, who for decades have owned and operated the Regatta Deli on Lake Avenue. In 2015 she partnered with her brother, Frank III, to revive another renowned city eatery, Shrewsbury Street’s Wonder Bar.

It was certainly tough for Johnson, but he said having baseball and his teammates around has been helpful in his own healing process.

“Yeah it’s nice,” he said, “especially being a pitcher. I get to go out there and throw something as hard as I can and that helps me take some anger out.”

It also might just help him climb that last rung on the baseball ladder — all the way to the big leagues.