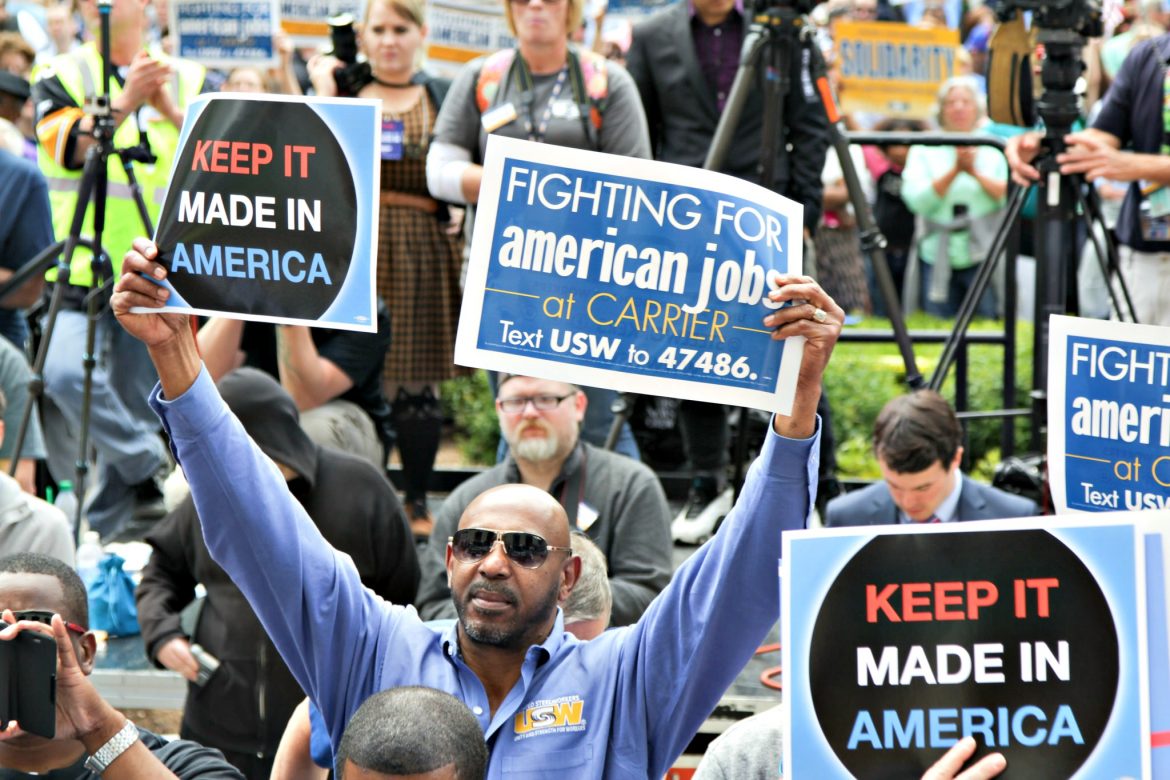 Carrier is not the only American manufacturing company the president has disappointed.

The hypocrisy of Donald Trump’s “made in America” bluster is overwhelming. Pakistan, Mexico, Indonesia, China, Bangladesh, Honduras and Vietnam are among the countries that benefit from the Trump brand. So much for leading by example!

Sure, it hurts when your own president does not believe enough in America that he would risk a few dollars of his multi-billion dollar empire to try to manufacture products right here in the good old U.S.A.

Trump’s empty rhetoric is a slap in the face to any American who would dearly love a chance to roll up their sleeves and work for an American manufacturer. Many of these Americans are the immigrants that Trump mocks.

Last week’s Mariano: A badge of honor for Worcester Police

And don’t get me started about Trump’s phony White House theme week for “Made in America.” Seeing the Hypocrite-in-Chief sitting in an American-made fire truck and then standing at a podium complaining that “we don’t make anything in America anymore” made we want to gag.

So that I am clear, the products, companies and personnel on display at the White House’s “Made in America” week are something every American can truly be proud of, especially Worcester’s own St. Pierre Manufacturing Corp., a 97-year-old maker of tire chains and then horseshoes that was selected as Massachusetts’ representative for the accompanying expo showcase.

But Trump’s actions simply do not match his words.

Unfortunately, Trump’s hypocrisy extends beyond his personal business greed to government operations. Trump and his allies want to gut the funding of the low-profile Bureau of International Labor Affairs, which monitors the treatment of foreign workers and helps American workers compete fairly in a global economy. 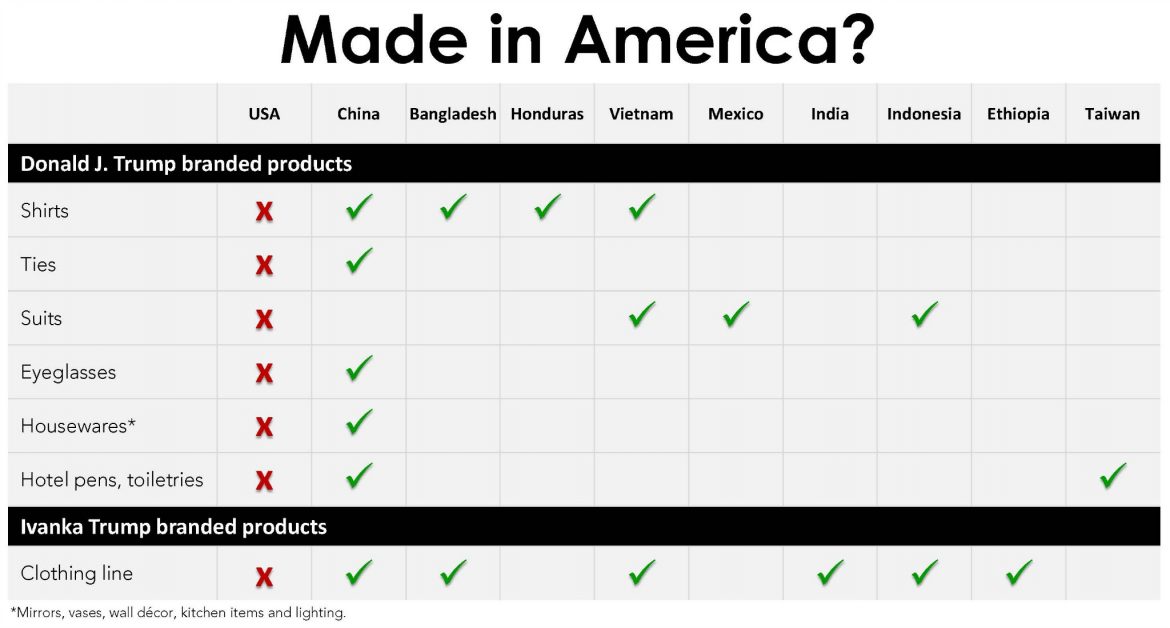 Major American manufacturers like Gap, Hanes, Nestle and PepsiCo have all urged Congress to restore the 80 percent funding cut.

But the truth is much worse.

The truth is that much of the mechanism of our state and federal government uses American tax dollars to fill the coffers of foreign manufacturers when it could be using at least some of those dollars to help bolster American manufacturers.

It doesn’t have to be that way. Doing what we can to support American manufacturers makes sense – and it should start with the goods purchased with our tax dollars by our government.

Look at it another way. Imagine that you own a struggling small business. A large chain has located in the area, and is hurting your business to the point that you have had to lay off workers and cut your own income. You have cut your prices and done everything possible to remain competitive, but you are still struggling to stay afloat.

Now, just imagine that your spouse, or a brother or sister, decides to spend a few hours shopping at your competitor and brings home an armful of packages that could have been bought at your store. When you asked why they would shop at someone else’s store, they told you that they could save a few pennies on each item.

Everyday in America, our government does the exact same thing. Our government takes money from taxpayers and then spends it on products made in other countries while manufacturers all across America go out of business. In some instances, taxpayers are actually paying the government to put them on the unemployment line.

Fixing the overall manufacturing problem will not be easy. It will require complex and dramatic shifts in trade and tax policy. Nevertheless, I propose that we start with a small but important step – the goods purchased by our own government. I propose that, for all government purchases, at all levels of government, we give a preference to any and all goods made here in America.

Certainly, what I propose is not a panacea. But it is a starting point.

First, let us admit that our current system is failing. It was not all that long ago that the United States was the world’s largest creditor nation. Today, we are among the largest debtor nations. More to the point, manufacturing, which used to make up nearly 30 percent of our economy, today makes up less than 10 percent — last month, a record low 8.47 percent of overall employment.

For the first time since 1900, we are in danger of seeing our once-dominant economy replaced by China as the world leader. People who oppose Buy American programs have been watching our manufacturing base erode without offering a reasonable alternative.

Second, many of the world’s most powerful nations already practice some form of preference. China, for example, subsidizes solar energy production with high tariffs and incentives to equipment manufacturers, and today dominates what should be an American market.

What I am proposing is nothing new. Why should we sit on our hands while China gives its companies an unfair advantage and then dominates our market? If the marketplace were truly free, then there would be no need for programs like this. But the market isn’t free. It’s time we evened the playing field a bit.

Third, what I propose is not a tariff or fee on all imports. In fact, if taken to its most extreme conclusion, where every governmental organization gives a preference to American-made products, our proposal represents only a small portion of those goods purchased when compared to the total American economy. The vast majority of goods purchased in the American market would not be impacted.

The details in any “Buy American” proposal are critically important. I would model legislation after the provisions used in the American Recovery and Reinvestment Act. That act spells out in detail the criteria for determining what is actually an American-made product. For example, I am not talking about a product that is only assembled here in America, but one that is predominately made here in America.

Legislative language should give a preference to American-made products but leave room for non-American purchases under any of the following conditions:

In Massachusetts, you are not allowed to prioritize or give an advantage to an American-made product. Your only option is to accept the lowest possible bid.

As executive director of the Worcester Housing Authority, I tried to get state legislation passed giving the WHA permission to provide a priority, under strict conditions, to American-made products. The WHA would serve as a test site for this idea. We would monitor the results and report our findings back to the state Legislature. That legislation never made it out of committee.

The federal government has the Buy American Act, which was passed in 1933 and applies to specific products. It is negated by a range of existing trade agreements including NAFTA, and the World Trade Organizations’ 1996 Agreement on Government Procurement.

There is also the Buy America Act, which was passed in 1983 and applies only to mass-transit related purchases (iron and steel) valued over $100,000.

Yes, it may cost a few pennies more. Yes, there will be times when there are no American-made products available. But, the bottom line, at least for me, is that doing nothing while millions of Americans stand in the unemployment line is unacceptable.

In my opinion, giving preference to American-made goods makes a great deal of sense. It is time that we support the men and women who work for an hourly wage, whose sweat helped build this country and whose hard-earned tax dollars pay for all that our government is able to do.

To be successful in the long run, we should admit that many low-end manufacturing jobs will be performed in other countries. American policy should focus on supporting value-added precision manufacturing and working with vocational schools and community colleges to develop the highly-skilled workforce needed.

America does best when it is leading the world. To that end, we should focus our manufacturing on those products and industries where other countries would struggle to compete.

As a part of our policy, we should prioritize the working men and women in America by giving them a preference in government purchases.

Ultimately, I could not care less if someone wants to use their own money to buy a Trump-branded tie made in China or a Trump suit made in Mexico or Indonesia. But when it comes to my tax dollars, I want them to be used to support American businesses and American workers.

2 thoughts on “Mariano: An idea: Our government should give preference to American products”