[UPDATE: Sean Rose and Ed Moynihan advanced to the November general election after being the top two vote-getters in the Sept. 12 preliminary.]

I have a special interest in District 1 — it is where I have lived for most of my life (even before there was a District 1).

The district includes all of Ward 1, which is predominantly residential with middle- and upper-middle-income homes. It also includes all of Ward 2, which has a mix of single-family homes, three-deckers and high-density subsidized housing such as Great Brook Valley and Lincoln Village.

There are large strips of commercial property like Lincoln Plaza. Assumption College, Indian Lake and the Saint-Gobain complex are also in the district [see maps below].

The four candidates to fill the seat held by Tony Economou, who is not seeking re-election, are a solid group. Here is an initial look at their strengths and weaknesses.

Candidates spend considerable time telling voters about their experience and professional background. While there are no prerequisites for the position, having a strong background can certainly be helpful when tackling the complexities of government operations.

Bill Coleman:  Over the years, Bill has been a candidate for multiple offices including City Council and state representative. He studied for the priesthood and holds a degree from Worcester State University. He worked in Washington, D.C., as an aide to former U.S. Sen. Edward Brooke. He is a retired educator from the University of Massachusetts at Amherst and has volunteered for a wide range of community groups.

Ed Moynihan:  Ed is currently chair of the city’s Community Development Advisory Committee. A longtime volunteer in athletic programs for young people, he holds a bachelor’s degree from Holy Cross and a master’s degree in history from Providence College. He owns a constable processing service business in the city. Ed also served as an elected member of the town council in Vernon, Connecticut.

Sean Rose:  Sean is executive director of Justice Resource Institute Connecticut, a nonprofit human service agency. He also owns a small private counseling practice for victims of abuse and neglect. He holds a bachelor’s degree from Lesley University and a master’s degree in education from American International College. He has volunteered for athletic programs and community organizations.

Gerardo Schiano:  Gerardo is a member of the city’s Citizen’s Advisory Council. He holds degrees from Alfred University and the New England School of Law. He was admitted to the bar in 2012 and is a practicing attorney at Lawson & Weitzen in Boston. He specializes in healthcare and medical malpractice matters.

ADVANTAGE:  All of the candidates have solid credentials and service. I would give a slight edge to Ed Moynihan.

While at-large city councilors certainly get many phone calls and requests, district councilors handle the bulk of the calls for city services (e.g. potholes, sidewalk maintenance, plowing, trash collection). The current district councilor said he spends 35 to 40 hours a week representing the district. Economou was emphatic: “This is not a part-time job!”

How will each candidate handle the duties while balancing their full-time job and family responsibilities?

Coleman:  Bill is retired. He said he would be a full-time district councilor.

Moynihan:  As a small-business owner, Ed says he has flexibility with his time. He said he would also be available evenings and weekends.

Rose:  Sean said he plans to slow down his private practice and also will eliminate his volunteer coaching of eight to nine different youth athletic teams to free up time. He also said that his work affords him whatever flexibility he needs.

Schiano:  Although he works for a law firm in Boston, Gerardo insisted he had the available time to meet the demands of a district councilor. He mentioned he has flexibility in his job, including the ability to work from home, and handle calls and emails during the day.

ADVANTAGE:  While they may not fully realize the demands of the position, I am certain that all of the candidates are willing to work hard to make themselves available when needed. The edge goes to Bill Coleman because he is retired. Gerardo Schiano and Sean Rose have a slight disadvantage in that they work in Boston and Northern Connecticut, respectively. Getting back to Worcester in the middle of the day might be a problem.

Willingness to take on the establishment when needed

Which candidate will have the fortitude to stand up and take on the mayor or city manager when that is in the best interests of their district? I asked each candidate to share an experience from their professional life that might illustrate their ability to stand up to authority.

Coleman:  Citing the old political adage, “Politics is the art of compromise,” Bill said he would seek compromise rather than confrontation, and that he would try to find a way to work cooperatively with others in authority.

Moynihan:  In 2003 as part of the Municipal Relief Act, the city instituted a 25 percent tax on summary process serving. Since this had a direct impact on his business, Ed refused to pay and then sued the city. An agreement was reached where he and other constable servers only paid the new fee on a small portion of their work – service that could only be provided by constables.

Rose:  Sean said that conflict is a “common occurrence in his day job.” As an example he mentioned rewriting practices on how to manage kids physically and de-escalate issues for children in a K-6 setting. Those new practices ruffled a few feathers.

Schiano:  “As a litigator, I stand up to people all the time,” Gerardo said. He mentioned standing up to opposing counsel and the court when his client needed his advocacy.

ADVANTAGE:  The advantage here goes to Gerardo Schiano. As an experienced litigator, he is used to mixing it up when necessary. He does not seem like a rubber stamp for anyone.

Understanding the needs of the entire city beyond District 1

Unlike an at-large councilor, the first job of a district councilor is to advocate for their district. But they also have to vote on matters that affect the city as a whole. So, what would they do if what is best for the city is not what is best for District 1?

Coleman:  Sounding very much like a seasoned politician, he said that if the city was going to benefit, he would work to get something for his district.

Moynihan:  “When the city is stronger, we all benefit as a part of the whole,”

Schiano:  As a lawyer, Gerardo said his client’s interests always come first. As a district councilor, he said it would be District 1 first.

ADVANTAGE:  Each of the five council districts needs a champion, someone who will put the interests of that district first. The advantage goes to Gerardo Schiano in understanding that.

Tell us something we don’t know about you.

Candidates are careful to tell us about their education, professional background and community service. I asked each one of them to tell me something, not listed in their campaign materials, that might give us a bit more insight into who they are.

Coleman:  As a member of the Worcester Infant Mortality Reduction Task Force, Bill started a campaign to help impoverished families get cribs for babies. Called “Cribs for Kids,” his efforts helped purchase cribs for more than 400 area families.

Moynihan:  Eleven years ago, Ed developed kidney cancer and lost a kidney. With the help and support of his family, friends and faith community, he was able to maintain his business and work his way back to health. He described it as a very “humbling” experience.

Rose:  Between kindergarten and sixth grade, Sean and his family moved 13 times from town to town on the South Shore. Growing up in a family of modest means, he remembers his mother cooking two Thanksgiving dinners, with the second one delivered by family members to area homeless individuals.

Schiano:  As a law student, Gerardo worked as a volunteer attorney providing free legal services. His first client was a non-English-speaking immigrant from Belarus who was working to bring his family to America. The man was illegally evicted and became homeless. Gerardo was able to successfully represent him in court. “In this case, it was a person down on his luck that was treated unfairly by someone who held way too much power over him,” he said. 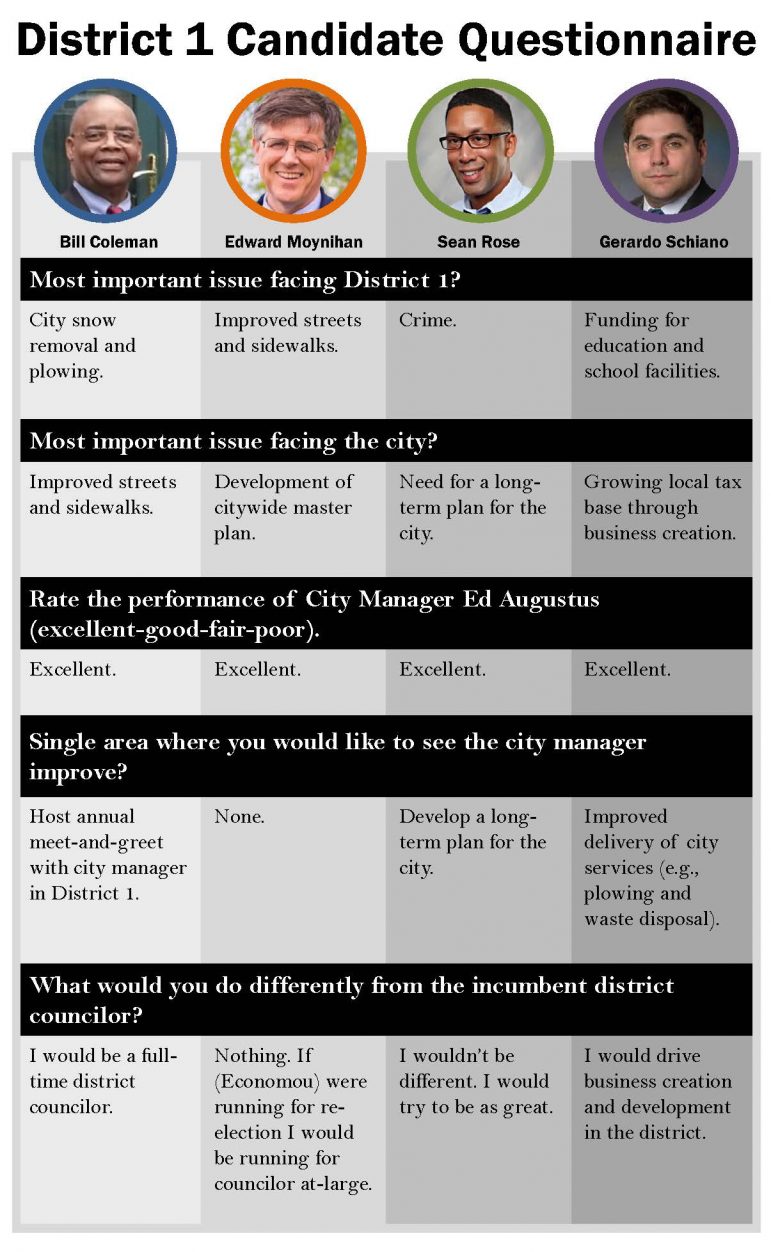 Each one of the candidates brings strengths to the job. The question is, which candidate will best represent the people in District 1?

Those of us who live in the district need to spend a little time getting to know them. This summer, there will be candidate forums in the district. You should attend one. When a candidate knocks on your door, as most of them will, answer the door and ask them a few questions.

I plan to offer my opinion as to who would best serve the district closer to Election Day.

This is our community, our district. We have a responsibility to question the candidates and make sure the person we select will work to strengthen our neighborhoods, keep us safe, and improve our schools while working with the other members of the council to move Worcester forward.

More Mariano: Why no one wants to run for public office

7 thoughts on “Mariano: Which City Council candidate has the advantage in District 1?”