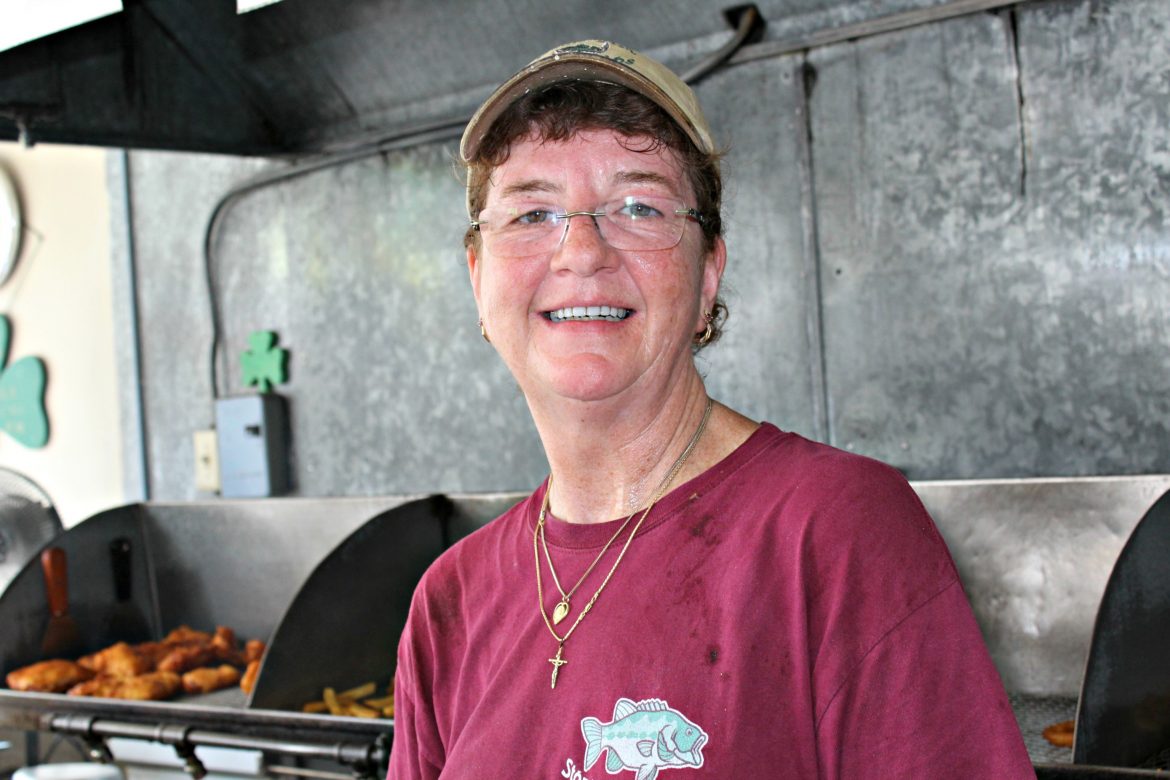 Back in 1967, the original Foleys – Evelyn and Eugene – thought it was a pretty sure bet that one of their five sons would want to be part of their new business. So they hung a sign above their shop at the corner of Franklin and Plantation streets that read Foley & Son Fish and Chips.

Fifty years later the shop and the sign are still there, but it’s their youngest and their only daughter, Patti J. Foley, with assistance from a few others each week, who is running the show – balancing the books, cutting the fish and sweating by the fryolators.

“When my mom opened it in 1967, she also sold grinders and pizza in addition to fish and chips. But the combination never really took off. So she decided to do only fish and chips,” Foley said. “This was her part-time job when we were all growing up.” 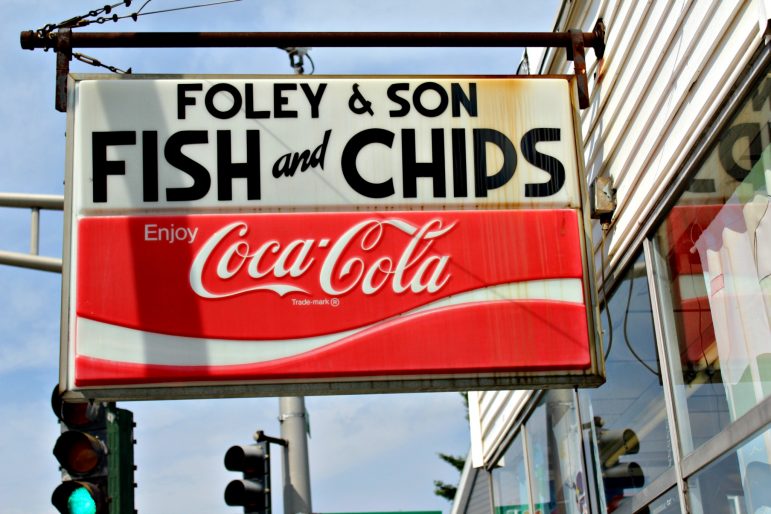 Foley said, “My mother and he were best friends and he had about eight restaurants on one time, all named after members of his family. My mom ran his Belmont Street store for years before she landed at the Plantation Street location here. And the rest is history.”

When Foley’s mother decided to retire in 1996, Patti purchased the business from her to keep it going the same way it had been for the previous 29 years.

“This is all take-out, Fridays only, as well as Ash Wednesday, and cash-only,” Foley explained.  “We don’t want to bother with credit card fees … then customers have to pay interest on the credit,” she said. “If we did accept credit, we’d have to increase our prices.”

Her father retired, too, in 1996, but her mother worked with her daughter for two years during the day. “She’d cut the fish and made sure I have everything under control,” Foley said.

The business still gets its fish from A.P. Fish Co., on Millbury Street and Grafton Street in Worcester. And they get their supply from the Boston docks. 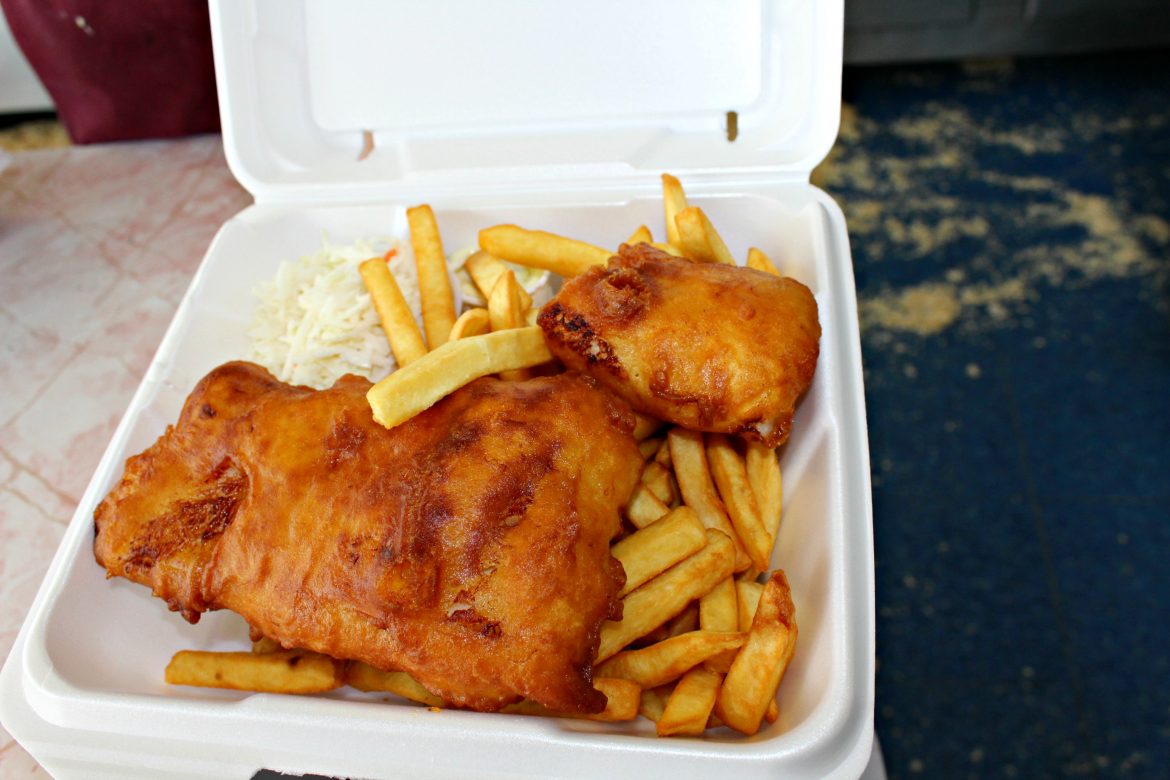 What else would we order but the fish n’ chips?!

Foley said, “I get my order on Thursday … and cut the fish that afternoon and get it ready for Friday morning. The sea scallops come in Friday morning. So everything is really fresh.”

It also has homemade coleslaw and tartar sauce.

Foley recalled, “In 2008, the Worcester Telegram & Gazette featured us on the front page of the Living section right before the Lenten season in spring.”

But nothing could prepare them for the crush of people on that Ash Wednesday, which is the first day of Lent for Catholics.

Historically, Catholics usually ate fish on Fridays as a vestige of the “no meat on Fridays” rule, which still applies to the Lenten season.

Foley said, “On that day (Ash Wednesday), I got calls from people in towns that I’ve never heard of, so I couldn’t give them directions on how to get here — such as, ‘How do we get to your place from Westminster?’

“I didn’t even know where Westminster was,” Foley said.

“Apparently we were a big hit,” she said. “We were out straight every Friday of Lent … with lines out the door every week.”

Over the years, “I usually have four people that work with me every week, and during Lent, two more people come in to help,” Foley said.

And during that Lenten season, the business will sell between 400 and 500 pounds of fish on Fridays. “It’s basically remained the same throughout most seasons. Summer might be a little slower due to people having cookouts and vacation plans. And a few decades ago, factories in Worcester would close for two weeks in July, so it was slow then, too,” she added. 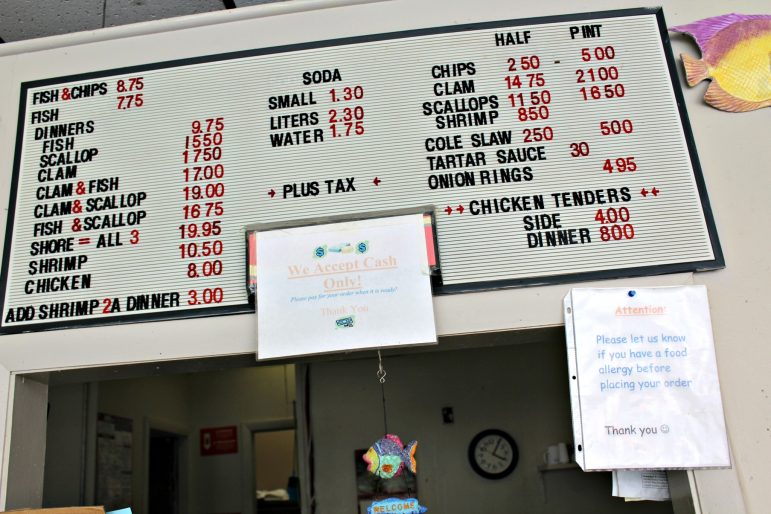 The Foley’s menu has rarely changed over the years.

Same as it ever was

“Basically everything is the same as it was in 1967. The fryolators, counter and back room are still in the same location. Of course, we’ve had some upgrades over the years but the layout is exactly the same as the original.”

Clams and scallops come in a distant second and third place as the most popular items. The dinners that feature fish, scallops or clams come with french fries, coleslaw and tartar sauce.

There are no booths or chairs, although you could find a makeshift resting spot on the carpeted top of the radiator that secures the window looking out onto Plantation Street. In fact, it would be against the law if people began to make themselves at home with a folding table or chair in the waiting area. The business never sought to serve customers like a traditional restaurant, which requires another type of common victualer’s license. And so it remains today.

According to TripAdvisor comments online, several customers of Foley & Son have found comfort crunching the batter-laden fish in their cars. Or they found refuge under a canopy as a makeshift umbrella while contently chewing on the sun-tanned whole body fried clams, scallops, chicken tenders and fries.

“I’m very fortunate and blessed that we keep going. I have a lot of regular customers. So without them, I’d never be here,” Foley said.

She’s even warned her “regulars” that they better not change their order on the way. “As soon as I see them coming, I’ve already got their meal waiting for them,” she said. 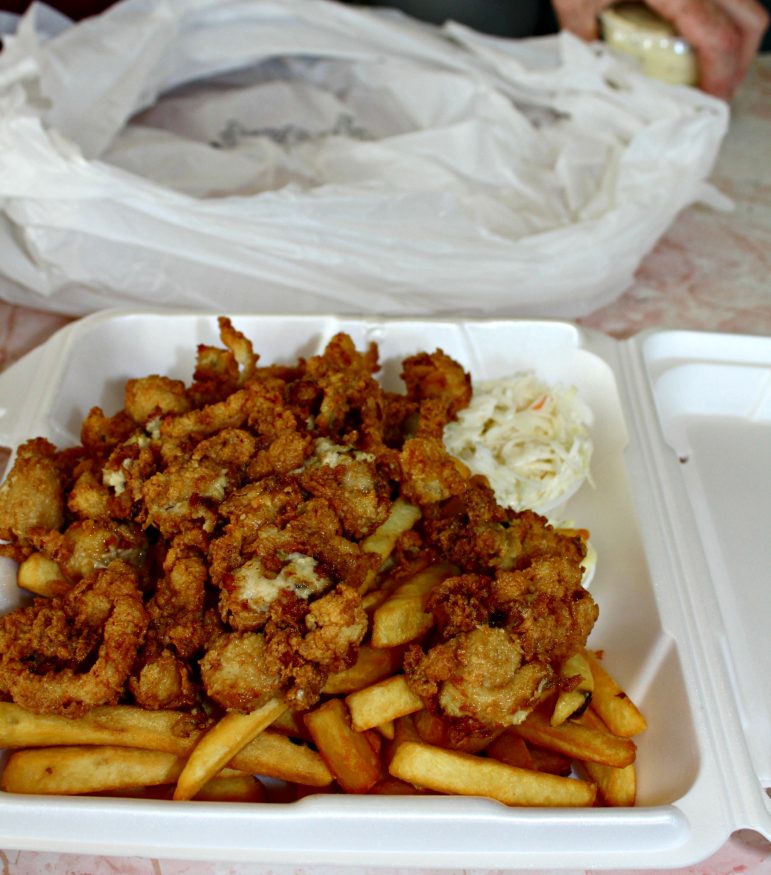 Who ordered the whole belly clams?

Foley said she grew up on Grafton Street, and rents the space for the restaurant, as her mother did when she ran the business.

The landlord, Ralph Ferraro and his wife, Bernadette, own the restaurant building and the garages, and live in the three-decker in the back of the restaurant.

“They’ve been very good to me … and I’m very fortunate,” Foley said.

Asked how long she plans to keep on serving fish and chips, Foley said, “Well my mother kept working into her 80s, so I guess I’ll be doing the same, if I can.”

There isn’t anything “official” planned for a 50th anniversary.

“I don’t even know the month when it officially opened in 1967. So no, there is no big party planned,” Foley said.

But there are still plenty of Fridays left in 2017 for all Foley’s regulars to celebrate.

3 thoughts on “The daughter also rises: 50 years of family at Foley & Son Fish and Chips”