Charlottesville showed us an almost unrecognizable country over the weekend.

“It’s disturbing and sickening to turn on the news and see that there are people in this country who believe that the color of their skin or their place of birth makes them superior to their neighbors, and we as a commonwealth flatly denounce and reject this intolerance,” the governor said during a press conference about what could be a similar rally planned for Saturday in Boston.

The events in Charlottesville were also unusual. Unlike a surprise attack, such as when Dylann Roof slayed nine African-Americans in a Charleston, S.C., church two years ago, a sense of foreboding grew starting Friday night. The frightening clashes that erupted then and the next day sent people across the country into an unmooring sense of helplessness — and then, thankfully, for many, the opposite of helplessness.

What millions saw happen in a proud, college city with a population of less than 50,000 stirred large numbers in Worcester and throughout the nation to gather, reflect, rally, write passionate messages on placards and social-media posts, and in other ways do something deeply needed and long desired: Unite.

Hate has no place in our country! Great to be here with the people of #Worcester standing up for love & peace #Charlottesviille pic.twitter.com/p8UUOkNgbA

If that sense of unity coalesces, grows and lasts, the events in Charlottesville — by their sharp contrasts between right and wrong playing out before our eyes — could help put America back on course.

This is not too much to hope for.

Americans are already strongly tied by abiding beliefs in equality, fairness and peace.

In the face of ongoing and alarming instances of hate crimes and hatemongering in this country — where fringe elements seem increasingly emboldened to step out of the shadows, show their faces, shout their messages and even kill — we are learning that our fundamental national unity isn’t simply a comfortable assumption. We must show it, and show that we share it. Even more, we need to foster goodness in our own hearts and actions.

We are also learning, especially since President Trump took charge, that we can’t leave outrage, guidance and productive responses up to our leaders. As disappointing and frustrating as that is, it also deepens the awareness of what has always been true: It is up to good Americans, each one of us, to step up and help each other, and our country, in the ways we can.

“Warrior of love,” read one teenage girl’s sign at Worcester’s Rally Against Racism Sunday night, the Telegram & Gazette reported. We can use, and frankly need, many more people like that.

We are proud that rally was held, and that so many young people attended. The young know very well what kinds of qualities and actions matter most in life. They are often especially scared by events such as Saturday’s in Virginia; and can be especially heartened by shows of community and solidarity that result.

America has always had faults. Diverse as we are, and dynamic and free, struggles and disagreements are a given. But underlying all this — millions of us know and feel to our bones — our fundamental, founding values are rock-solid. Because we have a country that strives to do right, we strive to follow suit. Tolerance is interwoven into the meaning of being American.

Built-in, too, to being American is that we have something wonderful to come together over, agree on and protect: our integrity as a nation in which everyone is accorded dignity and opportunity.

In this light, here in this place we cherish, the apparent rise in extremist factions is deeply unsettling.

White supremacy is wrong. The idea in any of its ugly versions is appalling, and its effects — slavery being the starkest example in our country — leave horrible scars.

The vast majority of us utterly reject neo-Nazism, the Ku Klux Klan, Alt-right ideologies and other forms of far-right thinking. These ideologies are destructive and indefensible, and very far afield of the values most Americans hold, no matter their political affiliation. 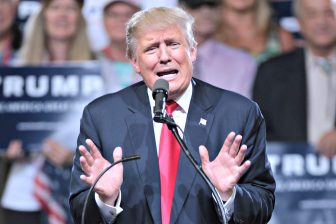 There are times where both sides are to blame. What happened in Charlottesville was not one of those. There’s no gray area about what happened in Virginia last weekend. But there are glimmers of hope in the horror and resolve that has flowed in the wake of that dark display.

Despite the divisive political discourse we have unfortunately grown accustomed to, we can’t let our country descend that far in the wrong direction. Freedom of speech is of course to be respected — but we don’t have to respect, nor listen to, those who would urge us backward.

Moderates on both sides of the political aisle should come together and form a courageous core in Washington, realizing they are ideologically closer to each other than to the extremists who profess to share their beliefs.

In this way, one thing extremism might do is help consolidate the many millions in the “middle” — people with all kinds of backgrounds who believe in equality and decency.

The extremist rally in Charlottesville got called off before it began, after Virginia’s governor declared a state of emergency. But that was not before menacing images and messages had reached millions of eyes and minds.

However, we might not still be talking about this large demonstration of hate in America — brought on by Charlottesville’s decision to take down a statue honoring a hero of the Confederacy, Robert E. Lee — had it not been for the death of a woman who was part of a throng of peaceful protestors, when a car allegedly driven by someone from the other side plowed into her and others. Later, two state troopers monitoring events from the air died when their helicopter crashed.

There are times where both sides are to blame. What happened in Charlottesville was not one of those. There’s no gray area about what happened in Virginia last weekend. But there are glimmers of hope in the horror and resolve that has flowed in the wake of that dark display.

Let’s not forget these extraordinarily senseless deaths. Extremism, hate and violence are not acceptable, and most especially not when they target who we are as a nation.

There’s no accounting for the anger and appalling ideas expounded by extremist groups and individuals. But there is a powerful countermeasure: Each of us who are on the side of good can be a force for good in every way we know how.

We can do this. We can unite against wrong. Along the way, we could rediscover all that we have in common in this country.

One thought on “Editorial: When will we say, ‘Enough!’ ?”