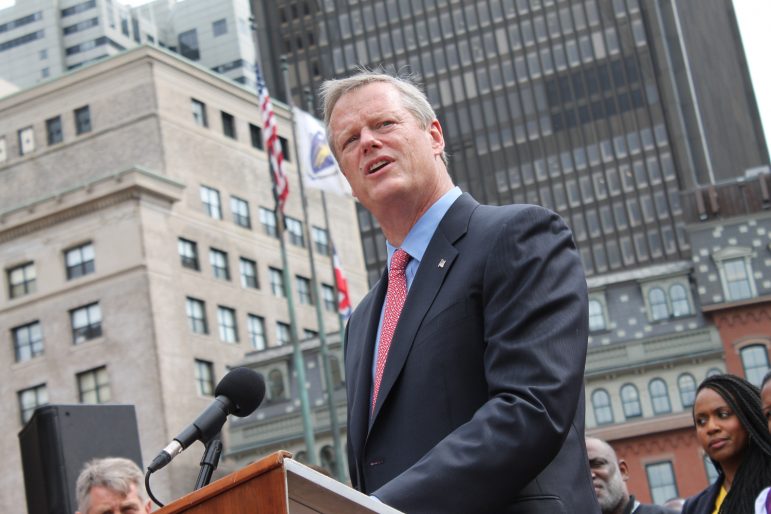 Gov. Charlie Baker said that “there is no place here for that type of hatred — period — that we saw in Virginia.”

State and city officials denounced the racial violence in Charlottesville, Virginia, over the weekend and pledged to keep Boston safe during a planned rally this Saturday, while acknowledging they know very little about the event or its organizers.

With an event billed as a “free speech rally” planned for Boston Common on Saturday, Boston Mayor Martin Walsh on Monday said he discourages the organizers from coming to the city while the “emotion and the wound and the pain are very fresh” after three people died in Charlottesville.

“Don’t hand hatred a megaphone and pretend you can’t hear it,” Walsh said at a press conference on City Hall plaza surrounded by a diverse group of civic leaders. “Leaders call out hate and reject it before it becomes violence. That’s why we’re here today. That’s why this weekend myself and the governor spent nearly about 10 or 15 different phone calls talking about how do we reject hate in the commonwealth and the city of Boston.”

A flyer posted to Facebook by the group Boston Free Speech describes Saturday’s rally as a gathering of the “New Free Speech Movement” to “reassert their right to the most basic necessity of civil society” and encourages “Libertarians, conservatives, traditionalists, classic liberals” and supporters of President Donald Trump to attend.

In a post on Facebook, the group claims it is not affiliated in with the Unite the Right rally in Charlottesville. However, NECN reported yesterday that three speakers scheduled to speak in Boston were in Charlottesville last weekend and have canceled plans to come to Boston.

The group wrote: “This Free Speech Movement is dedicated to peaceful rallies and are in no way affiliated with the Charlottesville rally on 8/12/17

“While we maintain that every individual is entitled to their freedom of speech and defend that basic human right, we will not be offering our platform to racism or bigotry. We denounce the politics of supremacy and violence. We denounce the actions, activities, and tactics of the so-called Antifa movement. We denounce the normalization of political violence.”

It concludes: “We look forward to this tide-changing peaceful event that has the potential to be a shining example of how we, in the city of Boston, can come together for the common goal of preserving freedom of speech for all and respectfully discussing our differences of opinion without engaging in violence.”

The group, Walsh said, is different from an organization with a similar name that has worked with police and obtained permits when they held free speech events on the Common in the past.

The commissioner also noted that the possible threats the police must take into account when preparing for a large event have evolved, now to include the possibility of a person using a car as a weapon.

Evans said BPD will have a “sufficient number” of police on duty Saturday, but declined to say how many officers could be assigned to work the rally. Boston police and the State Police, Evans said, will have “public order platoons” standing by on buses that can be called in if necessary.

Boston will also have undercover officers “working the crowd anticipating any anarchist type groups who might try to bring the march to a different level,” Evans said.

He said he expects very large crowds around the Common on Saturday and said he is confident his department can handle the crowds.

“We’ve handled major demonstrations in this city — whether it be Patriots celebrations, parades, Occupy Boston, Black Lives Matter,” Evans said. “I am confident that people who do come down and are going to march are going to be safe.”

Asked at what point Boston police officers would intervene between the ralliers and the groups expected to stage counter-demonstrations, Walsh said, “I think right off the bat. Our intention is not to let the two groups together.”

Evans confirmed that officers will attempt to keep groups with opposing views apart so as to minimize the chance of a violent clash.

“We’ll separate them, clearly. We’ll have barriers, we’ll have our pedal bikes, we’ll have plenty of assets to keep them at bay,” he said.

The commissioner said that “if things get ugly” police officers would remove ralliers from the situation and “get them out of there as quickly as we can.”

“We’re not going to tolerate anyone getting hurt or any acts of violence,” the commissioner said. “If we see that start to happen, the rally’s going to end real quick.”

The clashes in Charlottesville grew out of plans for a protest of the city’s decision to remove a statue of Confederate Gen. Robert E. Lee. Heather Heyer, a 34-year-old Virginia woman, was killed and 19 people were injured when a car allegedly driven by an Ohio man slammed into a group of people protesting white nationalist groups. Two Virginia state troopers were also killed when the helicopter they were using to monitor the rally crashed.

Baker said he spoke with Virginia Gov. Terry McAuliffe to express “our concerns and our outrage and our solidarity.”

“I want to be clear, what happened in Virginia was a tragedy and an act of terror, a tragedy perpetrated by white supremacists that disturbed, as it should, Americans everywhere,” Baker said. “As governor of the commonwealth of Massachusetts, I want to be clear that there is no place here for that type of hatred — period — that we saw in Virginia.”

Asked during the press conference if he would commit to attending a counter-protest Saturday, Baker said he would have to check his calendar and noted he preferred to describe it as a “unity rally.”

A coalition of Boston area community groups — including Violence In Boston, the Black Lives Matter Network, Black Lives Matter Cambridge and Black Lives Matter Boston — is planning a counter-march on Saturday to “send a message to white supremacists that their hateful rhetoric, physical violence, and fear mongering will not go uncontested.”

The group is planning to march about two miles from the Reggie Lewis Track and Athletic Center in Roxbury at 10 a.m. to Boston Common to “demand justice and stand in defiance of white supremacy.”

House Assistant Majority Leader Byron Rushing, who represents parts of Boston’s South End and Back Bay, said there needs to be a response to the rally, but said it must be measured.

“It’s a very, very difficult time when the right wing, especially the violent right wing, gets so much publicity and does such dastardly things. So we have to have a reaction to that, but we have to be calm about that reaction. We don’t want to act like they do,” Rushing said. “People are ready to do that. There are lots of people talking about what kinds of responses there should be, but on the other hand, we want to be ready for them not showing up.”

Rushing added, “We don’t know if they’re coming or not. It won’t be a problem if we have a big, fun, pro-diversity, pro-love, pro-what-democracy-should-be demonstration without them.”

Earlier in the day, U.S. Sen. Edward Markey said he had “great confidence” in Mayor Walsh and the Boston Police Department to keep the peace this weekend, but said it will be incumbent on U.S. Attorney General Jeff Sessions to take strong actions to prosecute hate crimes after what he described as a “too late” response from the White House to the violence in Charlottesville.

One thought on “In wake of Virginia violence, officials leery of Saturday “free speech” rally [with video]”