After reading this column some of my conservative readers will likely call me a “snowflake.”

The Merriam-Webster dictionary describes “snowflake” as “… a disparaging term for a person who is seen as overly sensitive and fragile.” It notes that “in the lead-up to the 2016 U.S. elections it was lobbed especially fiercely by those on the right side of the political spectrum at those on the left.”

I am no snowflake!

I do support many liberal positions – but not exclusively. For example, I strongly support equal pay and equal treatment, but I also believe that those able-bodied adults receiving public assistance need to go to work or attend school to receive their benefits.

And, in my entire life, I have never been referred to as overly sensitive or fragile.

But the callous, insensitive and damaging actions of Donald Trump are hurting so many that I am truly heartbroken.

Psychologist Elisabeth Kübler-Ross has postulated “five stages of grief” for the emotions experienced by terminally ill patients prior to death and others experiencing loss. In dealing with Donald Trump’s nomination and election, I, like so many others, have gone through several of those stages.

Stage 1: Denial. Yes, I admit that I never thought Trump would get the Republican nomination. I was well aware of Trump’s lying and cheating in his business life. I was aware that he stiffed contractors, defrauded students and manipulated his way through multiple bankruptcies to earn a fortune.

But I was wrong. He destroyed his opponents and won the nomination.

I was stunned when he picked a fight with a Gold Star family and criticized a Mexican-American judge, and furious when he had his wife humiliate herself while trying to explain away his boorish and likely criminal behavior when he bragged about grabbing women by their private parts.

But more and more, since the election, I find myself feeling a great sadness – for our country and for those who are easily picked on. 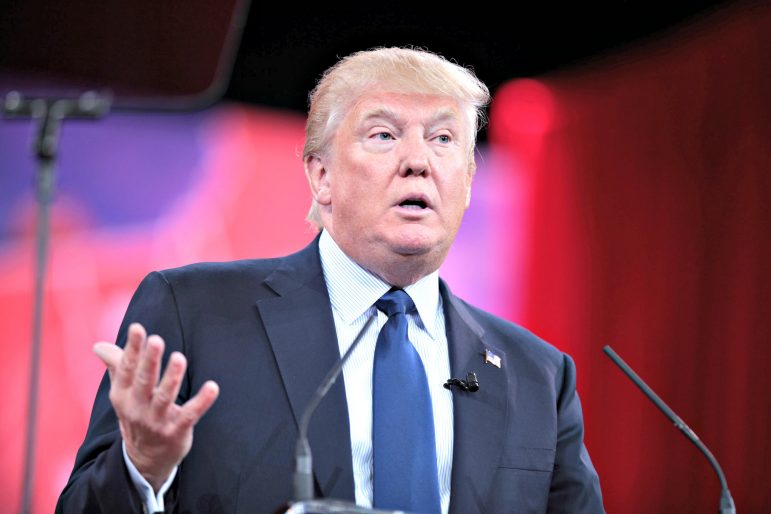 Destroying the respectability of the presidency

I never liked Richard Nixon much. As it turned out, he was a criminal. And although I was a big Bill Clinton supporter, I have to admit that his personal behavior was beyond unseemly. These and other presidents have done things that tarnished the presidency.

But in just six months in office, Donald Trump has created an indelible stain on our great nation’s reputation and the institution of the presidency unmatched in recent history.

Most politicians know how to “spin” the facts. Some actually lie outright. But Donald J. Trump is the Liar-in Chief! No one has ever lied so much about so little. He lied about the size of his inaugural crowds, about the size of his election victory, about signing more bills than almost any other president, and he even claimed he actually won the popular vote when the clear truth is that he lost by 2.9 million votes.

He also lied repeatedly about things that mattered.

President Trump has literally shoved other world leaders out of the way to get his face at the front of the line. He has belittled our country before the entire world and made us a laughingstock. It is not that his positions are all wrong – I support having the members of NATO pay their fair share – but his childish behavior, his need to be flattered and his complete capitulation to the Russians has brought our international reputation to an all-time low.

It is heartbreaking to see the damage that Trump is doing to our great and proud nation and its reputation. We have been the envy of the world. Under Trump’s leadership we are becoming a punchline.

Donald Trump made so many promises during the election that he had no intention of keeping. He lied about getting Mexico to pay for the wall and he lied about tearing up the Iran nuclear agreement.

President Trump needed to find a promise that he could keep to show that his presidency has not been a total failure. So he picked on the Affordable Care Act. It did not matter that he had no plan whatsoever (“Nobody knew health care could be so complicated”).

The Congressional Budget Office showed that each version of the repeal and replace effort would strip millions, even tens of millions of our fellow citizens of their health care. These proposals were especially cruel to families struggling with pre-existing conditions.

He frightened families and the elderly, all to score a few political points.

But it was truly heartbreaking to see desperate families being interviewed who were frantic to keep their loved ones’ health care.

And now that he has lost the battle to repeal and replace the ACA, rather than fix the existing law, Trump’s advice is to let the ACA fail and allow millions of his fellow Americans to suffer just so that he can take political credit – cruel.

Recently, I came home and found my wife with tears in her eyes. She looked at me and asked, “How can he do this?” It seems that morning Trump had tweeted that transgender persons would not be allowed to serve in the military.

There were no public hearings on this subject, no public outcry to change existing policy. His comments to the contrary, Trump did not even consult with his top military advisors. He just tweeted out a dramatic change in policy that left thousands of loyal Americans, who presently serve their country honorably, stunned.

It took me a few minutes to read about what he had done and a few hours to process the impact. I was heartbroken.

A young friend posted a poignant political cartoon on his Facebook page. The cartoon showed three identical coffins, each draped solemnly with an American flag. The posting asked the question: “Which one is Trans?”

Indeed. Americans who have been willing to fight and die for their country were now being told that somehow they are no longer worthy.

Just as I was pondering the plight of one group of Americans, the Trump administration assaulted another. The U.S. Justice Department under the leadership of Attorney General Jeff Sessions said that federal civil rights law does not protect lesbians and gay men from workplace discrimination. They argued that Congress has not extended Title VII to include sexual orientation.

This despicable assault on a group of our fellow citizens, who have faced such incredible levels of discrimination over the years, was breathtaking in its callousness.

I remember shortly after I was first sworn in as mayor of Worcester, a group of gay and lesbian citizens invited me to a service at a small church near the Worcester-Leicester line. In those days, mayors never made public appearances at gay events. In fact, I was advised by other mayors not to attend such events. I went anyway.

At the church, my wife and I could hear sobbing and softer crying by people who were overwhelmed just because we had attended their service. On the ride home, I could barely drive – I was the one with tears in my eyes.

I could never understand why anyone would treat someone differently because of who they are or who they love.

Why would President Trump and his administration go out of their way, with little or no political groundswell of support, to hurt their fellow Americans? During the election campaign, candidate Trump promised to “protect” and “defend” the LGBTQ community. Once he became president, Trump led the assault on their rights.

Stage 3: Bargaining. If only President Trump would be impeached – or get bored and leave. But I realize that if either of those things were to happen, and that is still a real long shot, it would come only after so many people have been hurt.

Stage 4: Depression. Part of the sadness that I feel likely comes from being from Massachusetts. Given the makeup of our delegation to the Congress, there is not much I can do to help. I cannot imagine that protesting in front of Congressman Jim McGovern’s office would be helpful – he would likely come outside and join us.

I am waiting for the next big event in Washington so that I can go and show my support. Yes, I will send a campaign contribution to a campaign or two to help elect men and women who respect our institutions and care about our fellow citizens.

It hurts to see so many of my fellow citizens living in fear, being abused, and unable to stop this callous assault. It breaks my heart that I cannot do more to help them.

Stage 5: Acceptance. The final stage of the Kübler-Ross model is “Acceptance”. At least for this American, that will never happen – never!

8 thoughts on “Mariano: Donald Trump is breaking my heart — the five stages of Trump”