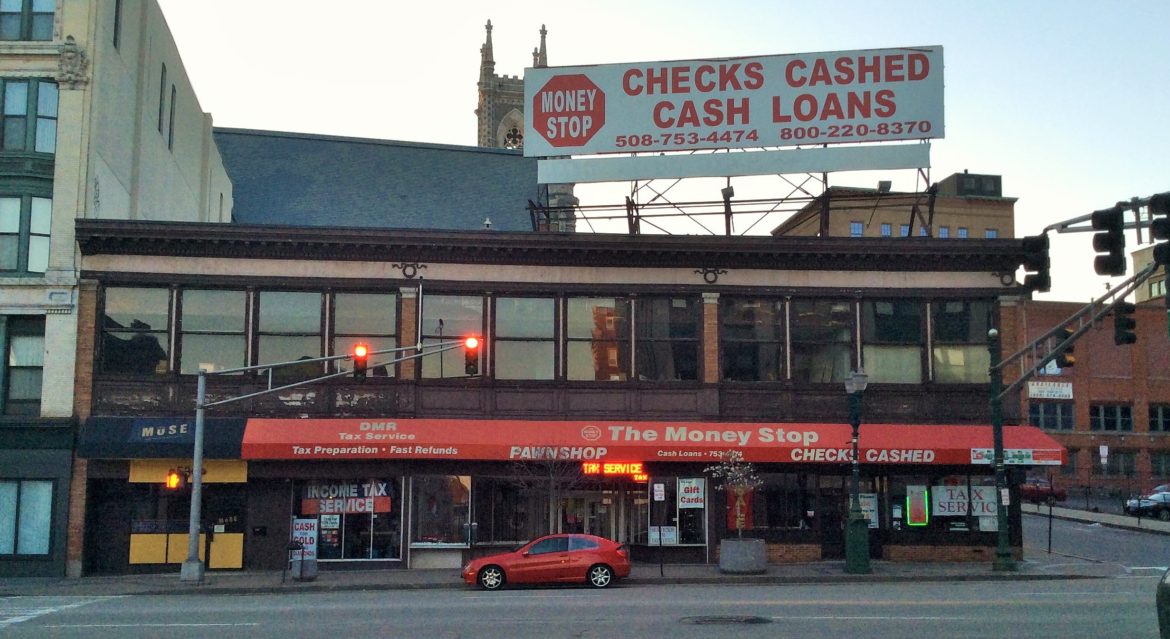 MassDevelopment bought the Money Stop building downtown in June. Now it's looking for a permanent owner.

A Main Street building that was identified as a target for acquisition and redevelopment by the Worcester Redevelopment Authority’s ambitious downtown renewal plan has been sold.

The building at 526-538 Main St., known for its primary tenant, The Money Stop pawn shop — and its conspicuous billboard — was sold to Massachusetts Development Finance Agency for $800,000 in a sale that closed May 31.

The WRA’s Downtown Urban Revitalization Plan listed 28 parcels or properties. The Main Street building, also home to popular new bar The Muse, is the first one to have sold.

“TDI Equity Investments spur transformative development, inspire private investment, and catalyze lasting growth in Gateway Cities,” MassDevelopment Executive Vice President of Real Estate Richard Henderson said in a press release. “MassDevelopment is excited to work with the City of Worcester and its TDI Partnership to support its economic vision and build on the momentum generated by investments in the city.”

According to the release, Mass Development plans to make moderate façade repairs and identify developers by soliciting interest through an RFP-like process. The RFP can be viewed on the MassDevelopment website.

“Building by building, downtown Worcester is being re-imagined and reinvigorated, and I want to thank MassDevelopment for their role in this ongoing revitalization,” Worcester City Manager Edward M. Augustus Jr., said in a release.

“This project, and others being developed by private companies and our state and local partners, will help inject even more vitality to our blossoming Theatre District, continuing to build density in the core of our city. These projects, combined with the upcoming $11 million redesign and reconstruction of Main Street, are what will take downtown Worcester to the next level.”

“We are completely thrilled about this purchase because we feel that the billboard and building have been holding the [Theatre] District back from all that we know it can be,” Hanover Theatre director of marketing and public relations Lisa Condit said. “We look forward to seeing what this project will make possible in Worcester.”

Also known as the Ransom F. Taylor Block and built as early as 1894, the building was added to the list of targeted properties because of “vacant upper or lower floors that could be developed for housing, commercial or office space.”

The authority’s expansive plan proposes retail use on the first floor and commercial use above.

The city’s Theatre District Master Plan, drafted in 2012, noted the building’s prominent location but took issue with, among other things, the billboard atop the building.

Among the challenges listed in the Theatre District Master Plan are roof signage, “retail not responsive to downtown existing office clientele” and the vacant second floor.

That plan called for the removal of the billboard, retail or a restaurant on the first floor, “storefront improvements including [removal of] bars and signs in windows, [and replacing the] awning,” and office or residential space on the second floor.

“[Worcester Business Development Corporation] is thrilled to welcome MassDevelopment to the neighborhood! Once again, MassDevelopment has stepped in at the right time to make an investment in our community that will change the landscape of Main Street,” WBDC Vice President of Projects Roberta Brien said. “MassDevelopment has purchased a highly visible downtown property and will position it for new ownership and new uses consistent with The Master Plan for the Theatre District.

“WBDC looks forward to working with all partners involved in the redevelopment of this transformative building to complement the positive, ongoing revitalization taking place downtown.”