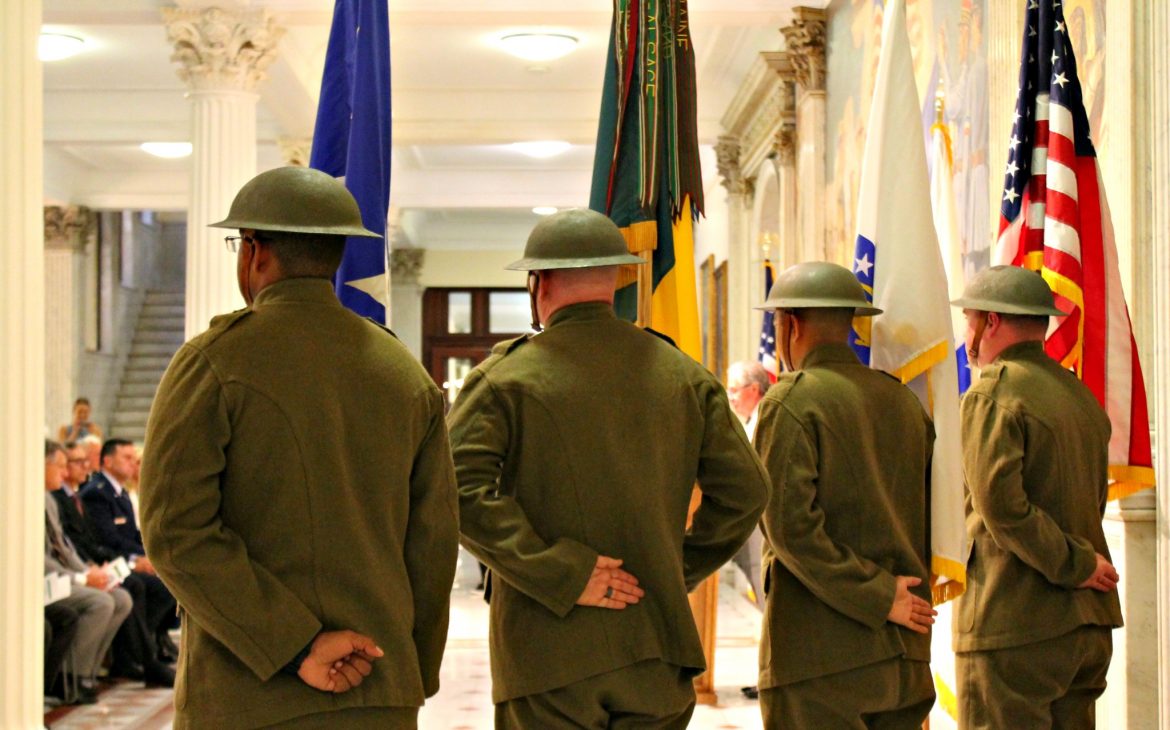 YANKEE DIVISION CENTENNIAL: A color guard dressed as doughboys from the First World War stood at attention Tuesday at the State House during a program honoring the 26th Maneuver Enhancement "Yankee" Division's activation 100 years earlier. The YD endured 210 days in combat fighting alongside French allies and was honored with the French Croix de Guerre.

BOSTON — When the stars align, sometimes the unexpected can happen.

The summer continued to serve up surprises as the sun went into hiding, a new multi-millionaire was made and career doors for past and present figures of the Massachusetts political-scape continued to open and close.

Former Mass. Lottery director and Mitt Romney aide Beth Lindstrom got last week started as she officially entered the U.S. Senate field as one of four Republicans now angling for Sen. Elizabeth Warren, while state Rep. Susannah Whipps threw everyone a curveball Tuesday when she announced the Republican Party was no longer for her.

Whipps, in something Beacon Hill has not seen in a long time, posted a statement on her website detailing reasons the Athol resident’s decision to unenroll from the GOP, including the overwhelmingly independent makeup of the electorate in her Western Massachusetts district.

What truly motivated Whipps to leave the party remains somewhat of a mystery, as she declined comment beyond her written statement. And despite voting against the small Republican bloc in the House this session on several key issues, she didn’t pick a fight on her way out as she said she hopes to work closely with both parties in the future.

Whipps might well be the first unenrolled elected official in the Legislature since Lawrence’s Willy Lantigua (before he became a Democrat), and now party leaders will have to figure out where she fits into a party-dictated committee and leadership structure.

But the afterglow of the eclipse and curiosity of Whipps’ decision quickly gave way to Powerball fever and the realization that one Bay Stater had beaten the 1-in-292,201,338 odds.

Mavis Wanczyk, the 53-year-old holder of the $758.7 million winning Powerball ticket did what every hopeful lottery player says they’ll do should they strike it rich — quit their job. Immediately.

Wanczyk worked her last graveyard shift at Mercy Medical Center in Springfield on Tuesday night, telling her bosses the next day not to expect her back after she became the largest lottery winner in Massachusetts history.

The Chicopee resident wasted little time coming forward to collect her prize, hoping to turn the spotlight off as soon as possible so, as she put it, she could go home and “hide in bed” while she figures out what to do with her overnight wealth.

Wanczyk wasn’t the only big winner from the Powerball jackpot.

State Treasurer Deborah Goldberg and others pointed out that the state will do pretty nicely as well, taking home $25 million in income taxes that could have gone to another state had the winning ticket not have been printed here.

The race to build a regulatory structure for the newly legal marijuana industry and position retailers to begin selling the leafy green plant by next July should get going in earnest by the end of this week, when the remaining four appointments to the Cannabis Control Commission are due.

Baker, Goldberg and Healey will also have to agree to two consensus appointments to the pot panel.

When they rejected the governor’s proposed Medicaid reforms last month, Senate Democrats laid out a plan to produce a bill of their own by the fall.

McGovern speaks out against continuing war in Afghanistan

America’s war in #Afghanistan is the longest in our country’s history. Trump must end it and bring our troops home. https://t.co/xgKGvKF3fh

Live from D.C., it’s Warren and Franken on big banks

.@SenFranken and I need your help to stop Congress from giving away your right to hold big banks accountable. Watch: https://t.co/fiITw5IdZn

Sen. Jamie Eldridge, D-Acton, one of the most progressive Democrats in the upper chamber on Beacon Hill, has decided to forego a chance at a seat in Congress he once coveted in order to seek re-election and remain in the state Legislature.

Eldridge, in a recent phone interview with State House News Service, described it as a “tough decision” to not try for a second time to win the U.S. House seat, one of nine in Massachusetts, that suddenly came open this month with U.S. Rep. Niki Tsongas’s retirement announcement. 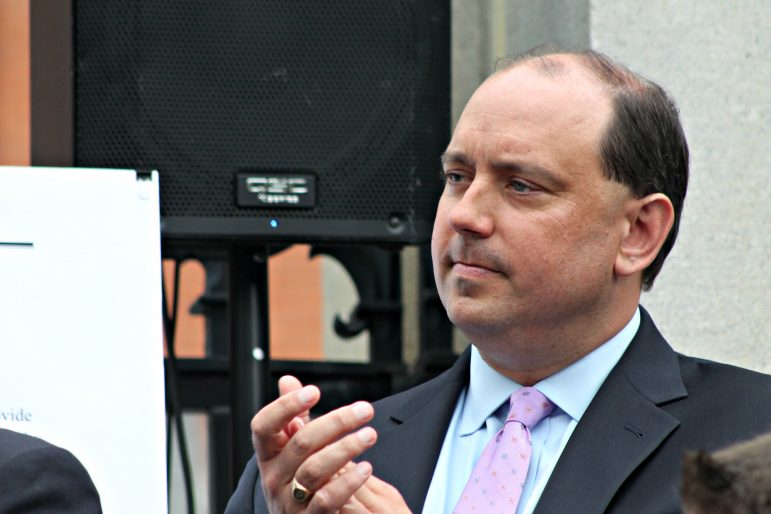 “Tough decision, but I’m very happy with my place in the Senate and really proud to be part of growing momentum on a number of issues in Massachusetts, from the Safe Communities Act and single-payer health care to criminal justice reform,” Eldridge said.

Eldridge was one of five Democrats to run in what was then known as the Fifth Congressional District in 2007 when Marty Meehan, who is now president of the University of Massachusetts system, left Congress to become the chancellor of UMass Lowell. Eldridge finished third in the Democratic primary behind Tsongas and Sen. Eileen Donoghue of Lowell.

He said he believes next year’s contest in the Third Congressional District, which was renamed after the last round of redistricting, will be “competitive,” but feels his place is in the Senate.

“I take satisfaction working closely with the grassroots, and it might be different if I were to run for a federal seat,” he said.

DeLeo details what’s next for Legislature

Sen. Jennifer Flanagan, a Leominster Democrat, will resign her seat this week to become one of five members of the new Cannabis Control Commission, tapped by Gov. Charlie Baker to help take on the responsibility of regulating the burgeoning recreational marijuana industry and licensing retail pot shops.

Flanagan, who voted against the 2016 ballot question legalizing pot for adults and has made mental health and substance abuse issues her main focus in the Legislature, will assume her new duties Friday, Sept. 1.

She is the second senator to leave that branch this year for a new job, and the special election to fill the seat will be the third in the Senate since the session began in January.

Baker called Flanagan a “champion and important partner” to the administration in its efforts to expand access to substance abuse prevention and treatment and combat the opioid epidemic.

“Her experience and service will be invaluable to the Cannabis Control Commission and to the people of Massachusetts as the Commission, our administration, the Treasurer, Attorney General, lawmakers, educators and public health and safety professionals work together to ensure the effective, responsible and safe implementation of the adult use of marijuana in the Commonwealth,” Baker said in a statement.

Based on the law passed by the Legislature and signed by the governor earlier this summer overhauling the legal marijuana ballot law, the governor’s appointee to the board was to have a background in public health, mental health, substance use or toxicology.

Apart from her work in the Legislature, Flanagan has a master’s degree from Fitchburg State University in mental-health counseling.

Flanagan is the first selection to the powerful new Cannabis Control Commission. In addition to the governor, state Treasurer Deb Goldberg gets to appoint the chairperson of the new commission, and the remaining slots will be filled by Attorney General Maura Healey and two consensus picks of the governor, attorney general and treasurer.

Flanagan served four years in the House before being elected to the Senate in 2008 to represent the Worcester and Middlesex District that includes the cities of Fitchburg, Gardner and Leominster, and the towns of Berlin, Bolton, Lancaster, Lunenburg, Sterling, Westminster, Townsend and two precincts in Clinton.

The position on the Cannabis Control Commission for Flanagan will come with a salary expected to be about $120,000 a year.

Last October, she told The Sun, of Lowell, that she planned to vote against Question 4 legalizing marijuana because of “many unknowns and unanswered questions about what this would mean for the commonwealth.”

Flanagan could not be reached for comment, but in a statement said, “I look forward to serving on the Commission as Massachusetts moves forward in responsibly regulating this new industry.”