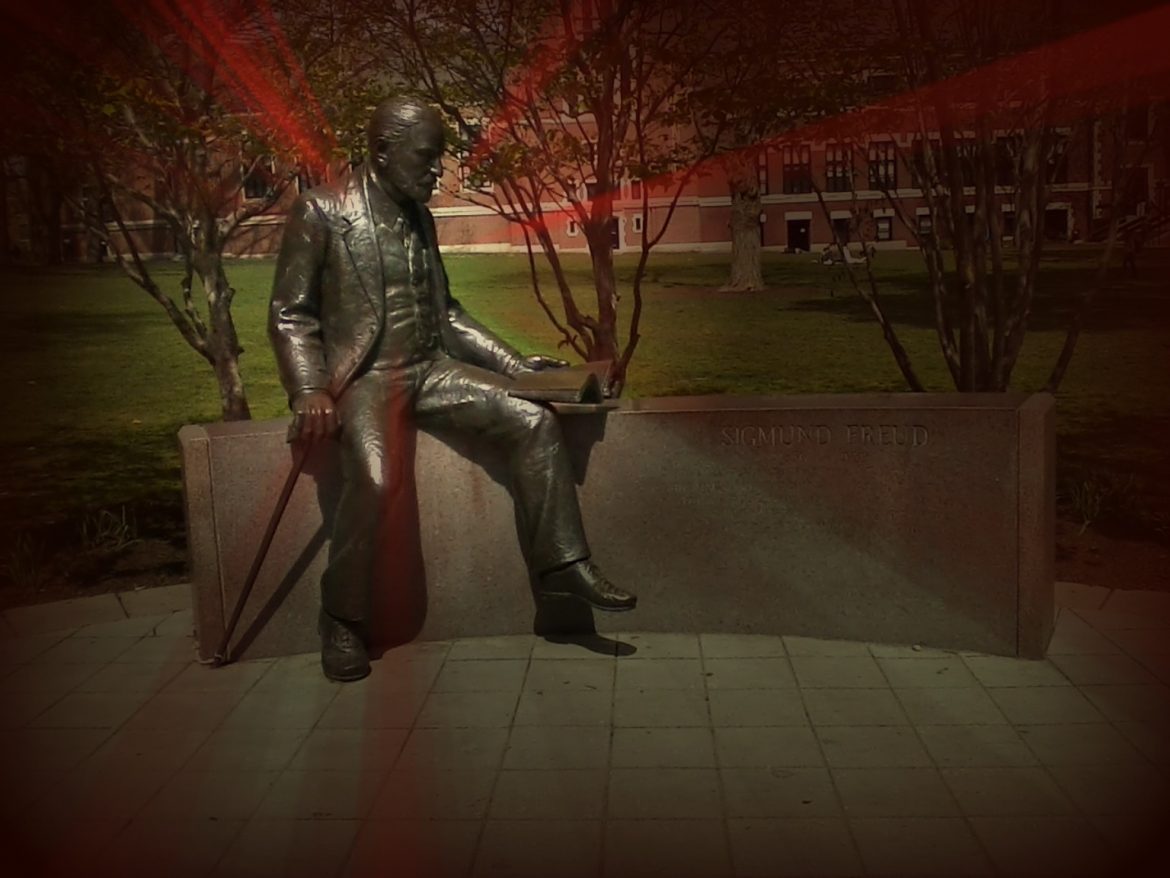 What if ... Clark's beloved Freud monument fell victim to protesters hungry for change?

Wondering what the future could hold for activism and divisive protests in our city? Find out with author BJ Hill in the Sun’s serial glimpse into the fantastic, sometimes troubling (and mostly fictional) possibilities of a not-so distant tomorrow.

WORCESTER, Aug. 24, 2063 — He had been sitting there for decades, but in the end, it took just a minute for Dr. Sigmund Freud to be ignobly yanked face-first to the concrete. The doctor’s statue, which until yesterday sat amiably on a low bench in Clark University’s open Red Square, was the latest victim of protesters lashing out against the culturally promoted, but environmentally destructive, practice of eating meat.

As temperatures across the country topped 105 degrees for the 13th straight day, protesters nationwide have embarked on campaigns to eradicate monuments and memorials to anyone who had both contributed to the current climate change by consuming meat and passively committed aggressions against animals.

Next to burning fossil fuels, raising livestock for meat consumption is regarded as the second-largest contributor to climate change.

“Previous generations had a moral obligation to not harm the earth or its animals. But every meal, they ignored this and did the opposite!” exclaimed one woman, Maria, who seemed to be one of the rally organizers. She asked that we not use her last name.

Maria continued through her megaphone, “We think about how many of earth’s creatures were slaughtered inhumanely. We think about the genetic monstrosities that passed for poultry and were engineered to squeeze out an extra pound of flesh. We think about the sows trapped in metal pens in which they can’t turn or even sit down. Or how much grazing land was cleared and how much damage was done to our environment, just so some people could eat prime rib.

“Tonight, Worcester says ‘No’ to the evil that was oh-so-casually committed. That excuse that it’s just what people did back then doesn’t work anymore. … If people stood up back then for what was right, our planet wouldn’t be in this situation it is right now.”

During Maria’s speech, an early model, human-driven red pickup truck rumbled from Main Street into the square. About a dozen attendees took straps from the truck’s bed and quickly tied them around the Freud statue. The driver, a man in his early 20’s dressed in black, gunned the motor and Freud lurched from his seat, balanced for a second on the low bench, and dropped to the ground with a dull metallic clang.

The crowd whooped approvingly and took photos before dispersing about 10 minutes later.

More What if … Worcester: UMass technology leads to ‘babies in a blink’

Counter-protesters were scarce. A recent Gallup poll reports that only about 7 percent of Americans still admit to eating non-synthetic meat regularly, and 23 percent admit to eating it occasionally. Fully 65 percent of respondents identify themselves as “completely vegetarian.”

Meat fell out of favor in the 2050s as correlations, previously researched but not widely known, were brought to light regarding meat consumption and climate change.

In 2051, a virtual-reality documentary transported viewers into slaughterhouses and packing facilities. The disturbing, graphic footage went viral and was shown at schools and churches around the country. Shortly thereafter, Hollywood celebrities denounced eating meat.

Worcester’s other sculptures that have been removed by the city or ripped down by protesters in recent weeks are the Honorable George Frisbee Hoar Monument and the Congressman Jim McGovern Bust, both outside City Hall, and the Major Taylor statue outside the Worcester Public Library. The Christopher Columbus Monument, which was once located in front of Union Station, was removed for cleaning in 2026 and has not yet been returned.

Relying on drones, biometrics and Implanted Chip Identification (ICID), law enforcement officials identified 243 of the 257 protesters and bystanders. Police are building cases against nine people for vandalism. Of the others, police have notified their employers of their attendance at an unauthorized public gathering. Police have also sent their families referrals to Social Adjustment Clinics.

As of Saturday afternoon, Freud’s bronze body was still lying on the ground.

“Well, I have to admit, I walked by this statue a thousand times and never stopped to appreciate it,” said Mikhail Ekomov, a Clark University history professor who was cutting through the square on the way to his office. “When I was a kid growing up in Russia, I remember the statues of our Communist leaders being removed because they represented something people no longer believed in. Or needed. History is human and humanity is fluid. What we put on a pedestal today might be consigned to the dustbin tomorrow.

“I suppose the good thing,” Ekomov noted, “is Freud died long before this statue was dedicated. So he never knew there was a monument here for him, and he’ll never know it was torn down.”