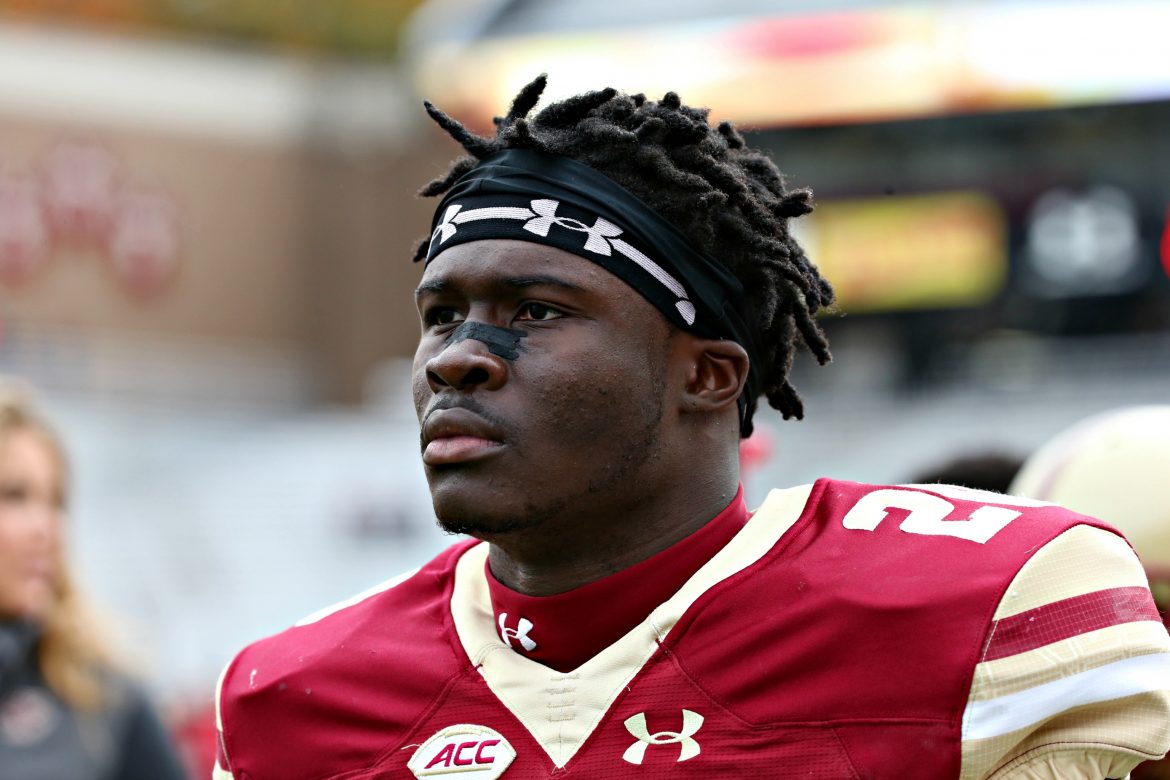 Isaac Yiadom, a senior defensive back at Boston College, is on the rise for the Eagles.

From the moment he stepped foot on Boston College‘s campus, Isaac Yiadom has done his part for the Eagles.

That part may get significantly larger this season, however, as the former Doherty Memorial star has been getting talked up by national media, and perhaps more importantly, by fifth-year BC head coach Steve Addazio.

Ever since Addazio mentioned that Yiadom had the potential to be an all-conference player in an interview with ESPN, Yiadom’s name has come up a lot more in talks about the powerful Atlantic Coast Conference, and college football in general.

But to the Worcester native, that’s all just noise.

“I don’t really listen to any of that, I just have to keep doing what I always do, and that’s work on what I’m not good at,” Yiadom said.

A humble thought, though it does bear mentioning that, when asked what he isn’t good at, Yiadom responded with a smile and said, “Not much.”

Indeed, Yiadom has every reason to be confident. He was an immediate contributor on special teams as a freshman in 2014, and has started 15 games over the past two seasons. Now a senior, Yiadom is entrenched as a starter at cornerback, and seems primed for a breakthrough season.

“(Isaac has) developed physically and fundamentally, but there’s also a mental part of the game,” Addazio said. “Sometimes when you’re a young guy, the enormity of (the game) can weigh you down. Or, maybe you get beat on a route and you can’t stop thinking about it and move on. When you’re a veteran guy, you know what that’s like, and you can move onto the next play. It’s the experience factor.”

The physical part of the game has come quickly to the 6-foot-1 Yiadom, who has a unique blend of long limbs, quick feet and fluidity that make him a natural defensive back. Once considered too light, Yiadom has put in work in the weight room and bulked up to about 190 pounds, and he’s never been shy about coming downhill to take on the run.

In fact, a stop in run support may be the biggest play of his career so far, and the moment that inspired the confidence of coaches and teammates. 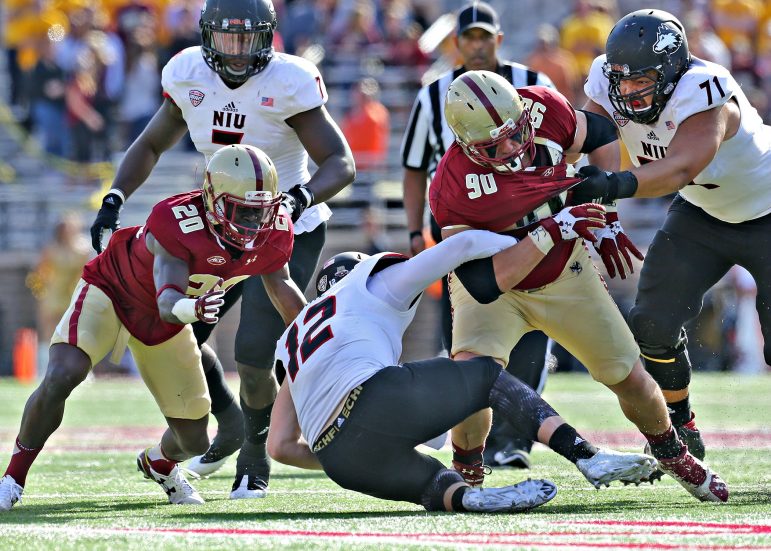 Isaac Yiadom gets in on a sack against Northern Illiinois last season.

On a critical 4th-and-1 for Maryland, BC’s opponent in last year’s Quick Lane Bowl, Yiadom stayed at home on a broken play, and managed to corral a Maryland ball carrier who received a desperation pitch from his quarterback. Yiadom’s tackle gave the ball back to BC with a nine-point lead and 10 minutes to play, and the Eagles held on for a 36-30 win, their first bowl victory since 2007.

“Being a senior now, things are different and a little easier,” Yiadom said. “I know the playbook, so I don’t have to stress about that, and now I’m the one talking to the younger guys, telling them they have to study, they have to learn.”

Most local fans will remember Yiadom as one of the most electric players to ever come through Central Massachusetts.

During his senior campaign, Yiadom led Doherty to the Division 4 state championship, culminating in a big win at Gillette Stadium against Dennis-Yarmouth. As a senior, Yiadom starred on both sides of the ball, as a receiver and defensive back for the Highlanders, and he even played quarterback in certain “Wildcat” packages.

Yiadom still carries the pride of that historic Doherty team, and takes great pride in having played in the Heart of the Commonwealth.

“Me and Davon (Jones), are really close here,” Yiadom said of the former St. John’s star and likely top running back for the Eagles. “I think of him as my little brother, and I take care of him, and he takes care of me. It’s great to have someone from Worcester on the team, cause the [New] Jersey guys always talk smack about Mass. football.

“We just tell them, ‘Worcester is different.’ ” 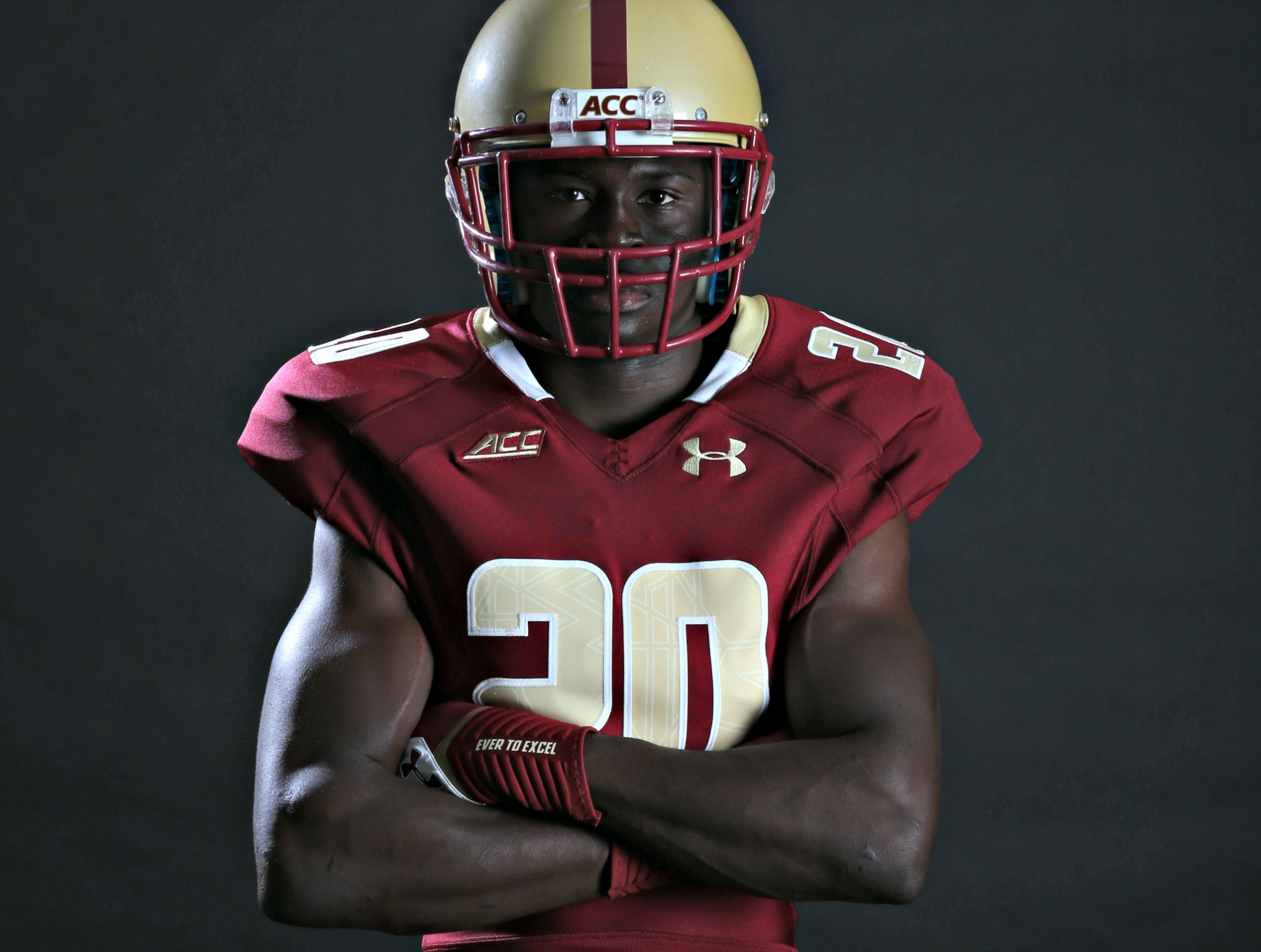 Isaac Yiadom, BC defensive back 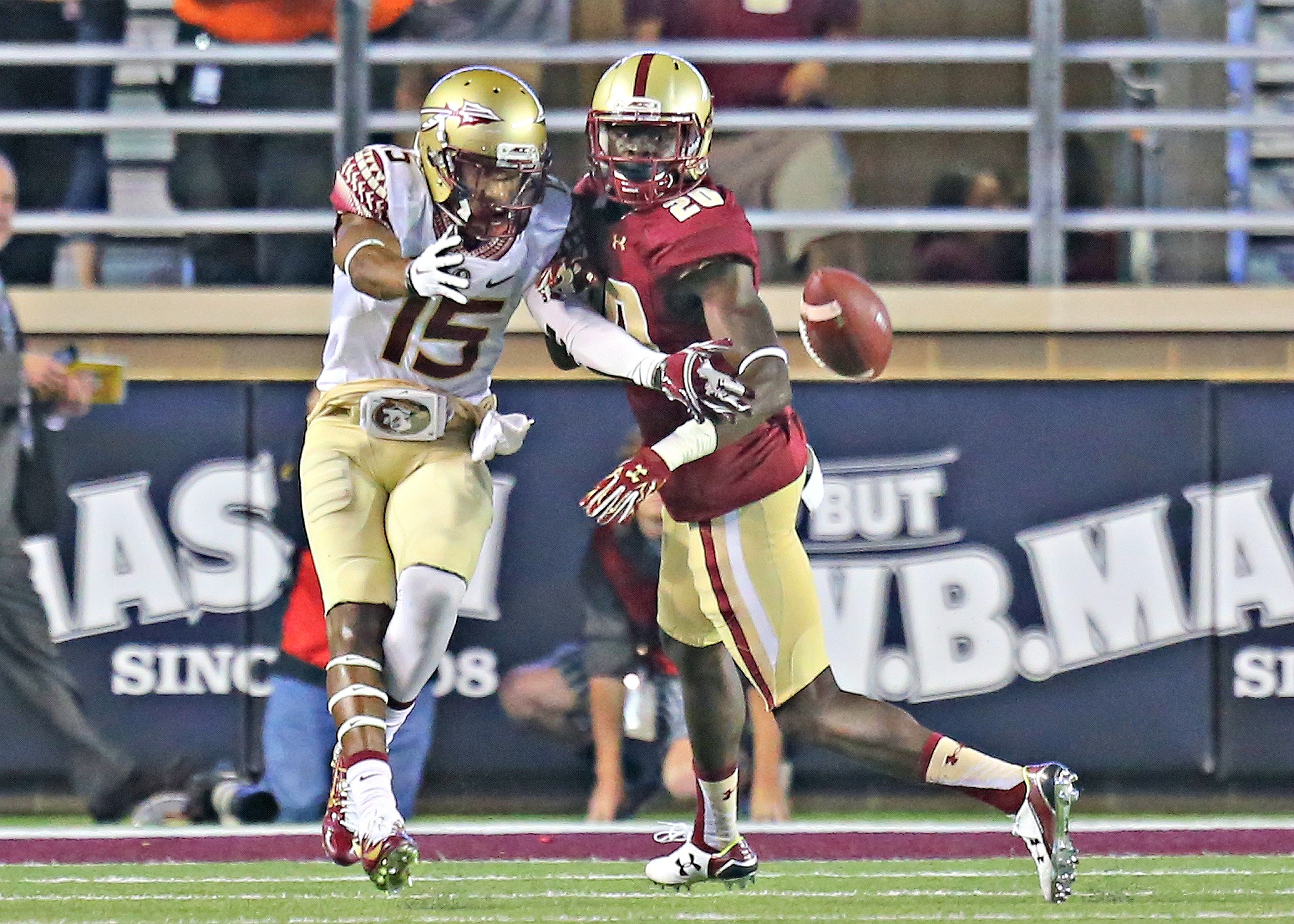 Isaac Yiadom breaks up a pass against Florida State. 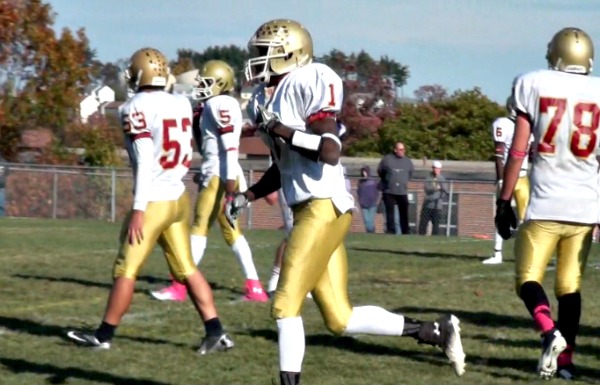 Isaac Yiadom, after scoring a TD against SPM for Doherty in 2013. 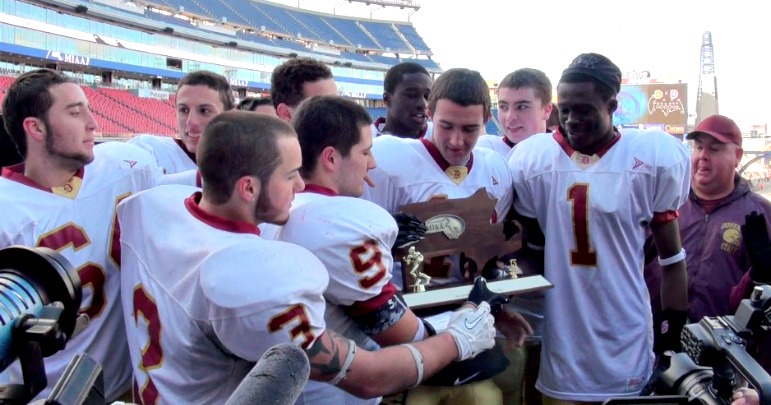 Isaac Yiadom (1) and his Doherty teammates celebrate the 2013 state championship.