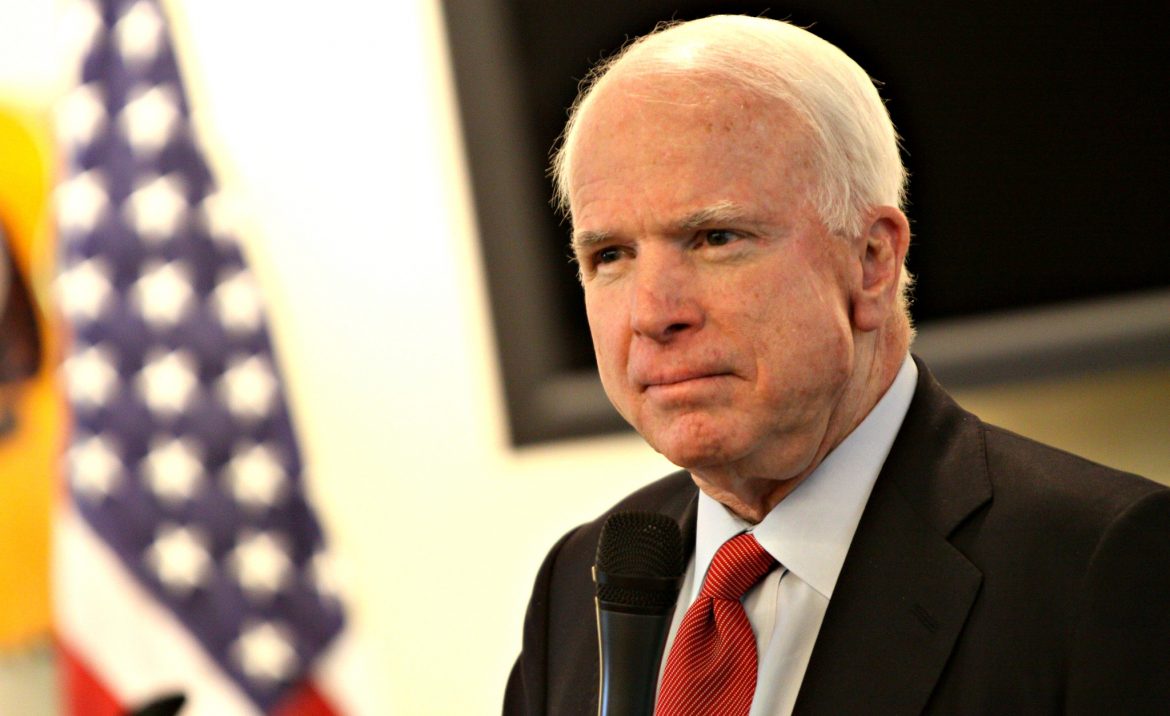 Healthcare reform needs heroes to cut through the nonsense.

Friday, it got one.

Sen. John McCain, explaining his lack of support for the Senate’s latest healthcare bill, had one of the bluntest, most helpful takes on this issue we’ve heard lately.

“A bill of this impact requires a bipartisan approach,” the Arizona Republican said in a statement.

Peel away all the arguing, rushing, concealing and maneuvering of the last few months and years, and that is the prescription: a bipartisan approach. As McCain understands — along with a few other courageous leaders in Congress, both Republicans and Democrats — our government has to stop dodging that approach or dooming its occasional stabs at it, and begin cooperating in earnest.

No fan of the Affordable Care Act, McCain nevertheless recognized and spoke up against the harm of sweeping legislative changes crafted hurriedly and behind closed doors. McCain rejected a bill that — like its failed predecessors in recent months — seems driven by an overriding, come-what-may obsession to fulfill President Trump’s campaign promise to repeal and replace Obamacare.

With midterm elections arriving next year, another driving force is vulnerable Republicans’ need to succeed in the party’s seven-year-old promise to upend Obamacare — or face angry conservative constituents.

“This issue is too important, and too many lives are at risk, for us to leave the American people guessing from one election to the next whether and how they will acquire health insurance,” McCain explained.

And then he used a powerful word: conscience. “I cannot in good conscience vote for the Graham-Cassidy proposal. I believe we could do better working together, Republicans and Democrats, and have not yet really tried.”

McCain’s statement struck needed notes of calm and wisdom on healthcare reform. The issue has been a thorn in the side of Republicans — and controversy and uncertainty over it a deeply unsettling matter for Americans — for far too long.

Right now, a budget reconciliation “deadline,” so to speak, of Sept. 30 is bearing down on Senate Republicans. After that date (unless senators vote to change it), the chamber would need a filibuster-proof 60 votes, rather than 50, to pass the Graham-Cassidy-Heller-Johnson healthcare bill.

But the rush is artificial; on the other side of Sept. 30 — Oct. 1 and the weeks and months beyond — health care will remain a matter in serious need of hard work.

The bill is named for its co-sponsors, Republican Sens. Lindsey Graham of South Carolina, Bill Cassidy of Louisiana, Dean Heller of Nevada and Ron Johnson of Wisconsin. It was a surprise Sept. 13 filing, resurrecting the GOP’s ACA overthrow push at a time of immediate and pressing concerns, including tax-policy reform and North Korea’s threatened aggression.

Graham-Cassidy, as the bill is usually called, would so severely alter the framework of the ACA that President Obama’s signature accomplishment would be all but unrecognizable. Gone would be the mandate requiring the purchase of health insurance. Medicaid expansion in states would be eliminated, as would ACA tax credits; states would develop their own systems — creating a situation of complexity times 50 — and receive federal block grants. Depending on the state, protections could fall away that block insurers from charging more for customers with pre-existing conditions.

While calling for drastic changes to the existing healthcare law, the bill is loosely understood even by lawmakers; and its timing did not allow time for the Congressional Budget Office to score its long-term financial implications.

Massachusetts Gov. Charlie Baker, a Republican well-schooled on the topic of health insurance, opposes Graham-Cassidy, as do other powerful governors.

Baker said during an interview with NPR’s “Morning Edition” Thursday: “… [O]ne of the things it does is it establishes this notion that healthcare costs be the same across all 50 states, and it goes to kind of a national average for determining how this block grant proposal works. … I don’t see how you can say that health care, which — 75 percent of the cost of health care is typically wages — how you can say there’s one cost of health care for service delivered for the entire country and make that work. And any high-wage state, of which Massachusetts is one, gets absolutely slammed under a proposal like that, unfairly.”

Indeed, the proposed legislation would mean an estimated $8 billion loss for Massachusetts by 2026, according to a report by the healthcare consulting firm Avalere Health. Other states that expanded Medicaid — fellow “blue” states such as California and New York, which would lose a combined $123 billion by 2026 — would almost all suffer financially. Meanwhile, most states that chose not to expand Medicaid would do well, especially Texas, which would pick up $35 billion.

The Republicans’ partisan, slapdash and even greedy approach to such a vitally important issue is utterly unacceptable.

Whether the outcome is outright healthcare reform or modifications and improvements to Obamacare, we all must realize that any effort on this issue isn’t going to work until it’s done right.

With the near-certain failure of Graham-Cassidy, we fervently hope healthcare reform has found its turning point, and that conscience, calm and leadership will at last begin to heal the divisiveness in D.C. and throughout the country.

Unlike McCain, we support Obama’s Affordable Care Act and would like to see it strengthened through careful addressing of its faults.

But we admire McCain’s straightforward words and his call for time and reason. For an issue of the magnitude and impact of healthcare insurance, a bipartisan approach is essential. It has always been the answer.