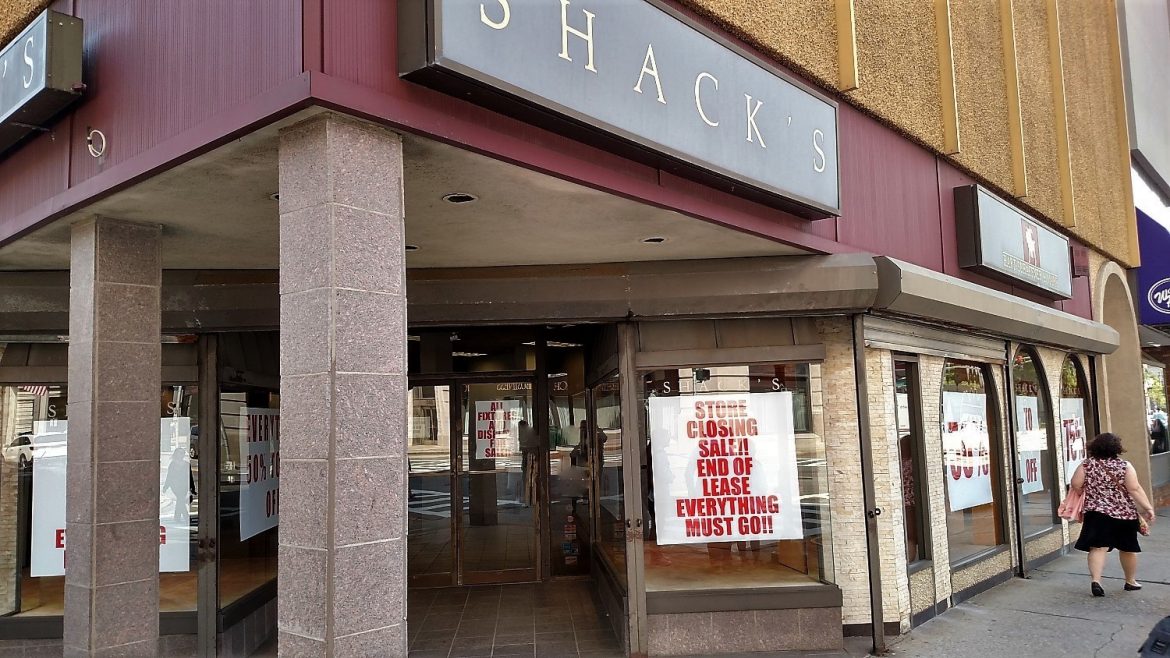 Shack's clothing store is not long for Main Street -- after nearly nine decades in business.

The revitalization of downtown as a retail center and destination has been dealt a double dose of disheartening disclosures in the past week.

The first was the announcements that Shack’s, the iconic clothier at Main and Mechanic streets, will close its doors for the final time on Sept. 30.

The second was that its bookend on North Main Street, Elwood Adams Hardware, 156 Main St., will also close as early as the end of September.

It is too soon to tell whether these closing are harbingers of more bad news or simply unrelated events. However, the history of the businesses that are closing — Shack’s has been in business 89 years and Elwood Adams opened in 1782 — should give us pause.

The departure of such longstanding businesses breaks an impressive streak of hopeful announcements about North Main Street. A little more than two months ago, in the span of 19 days:

As each of these developments was trumpeted by City Manager Edward M. Augustus Jr., as “another piece of the puzzle of what’s happening in the renaissance in the city of Worcester and downtown,” retailers on Main Street face economic headwinds that come from not yet having a dense urban retail sector or permanent residents nearby.

Unfortunately, those headwinds will get stronger as the start of the long-planned two-year reconfiguration of Main Street is imminent.

Most concerning, however, is what comes after the redevelopments and the reconfigurations.

The Institute for Local Self-Reliance is a group that “works with citizens, activists, policymakers and entrepreneurs to design systems, policies and enterprises that meet local or regional needs; to maximize human, material, natural and financial resources; and to ensure that the benefits of these systems and resources accrue to all local citizens.”

In Its paper “8 Policy Strategies Cities Can Use to Support Local Businesses,” ISLR noted “Between 1997 and 2012, the number of independent retailers fell by about 108,000 … Even more alarming than the overall decline in small businesses is the fact that it appears to have become much harder to launch one: The number of new firms created each year has fallen by nearly half since the 1970s, a trend that economists say is slowing job growth.”

Among the most startling of ISLR’s findings about the reduction of independent local business is how “public policy and concentrated market power” work against it.

“Banking consolidation and the decline of local financial institutions has left more entrepreneurs struggling to obtain the capital they need, a barrier that is especially acute for Black, Latino, and women entrepreneurs.

The paper points to eight possible solutions to ensure that independent local business can survive and thrive in a redeveloped environment. Among those are expanding access to capital and reorienting economic development incentives.

The redevelopment of North Main Street is underway. As we lament the loss of two longtime Worcester business, we look forward to what is ahead. However, we do so cognizant that if it is devoid of unique local businesses it may well be a place not worth visiting.