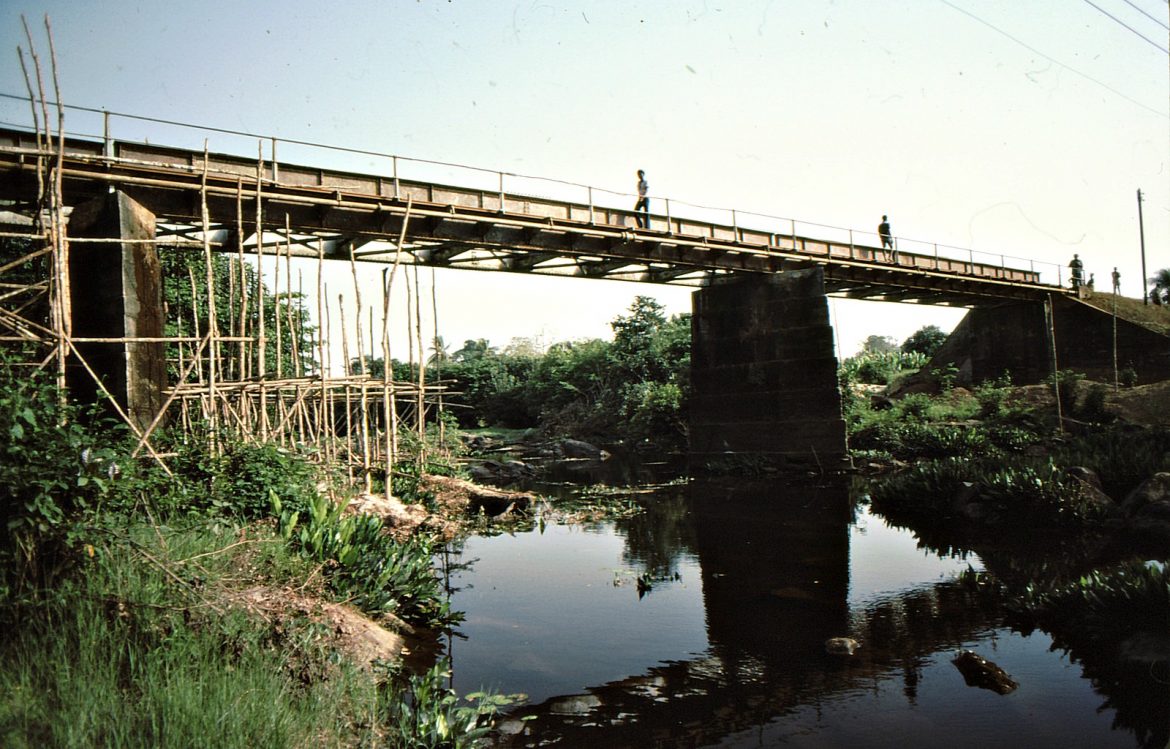 The Daru bridge in Sierra Leone afforded Augustine's uncle a measure of respect from his military colleagues.

All my classmates in Motema, and even in Daru, had secured placement for their next school year, but I remained locked in battle with what was next on my agenda at home.

My brother’s friends were all astonished at my excellent school exam results, but none of them could help me gain acceptance to a good school. Maybe they could help me get to Bo, where the school officials from Segbwema suggested I should go for high school because my mom and step-dad lived there.

I did all my brother Duran’s domestic work for him. He was not married, and lived alone before convincing my grandmother I should move to Daru and attend the nearby secondary school. He was always ready to flog me for simple mistakes. I was only 12, but he expected me to behave like a mature man.

I decided to walk to freedom one day, just five days after my interview at the Wesley Secondary School. I went to the military barracks junction looking for any military personnel going to Freetown — Bo, in the center of the country, was on the way. A truck was going by at11 a.m.

My brother had gone to work at the barracks by 8 a.m. and he’d asked me to bring his lunch by noon. I had spoken with Mr. Lahai, his bingo comrade. He gave me the hint about the 11 a.m. truck. I took Duran’s food to him and I sat a little. He blasted me for bringing his food early. He asked me to go back home and wash his uniforms. “Yes, sir!” I said, and ran out quickly.

I pretended I was heading home. He looked toward the back of his office to watch me go by. My direction quickly changed, and soon I was in the military truck ready to set off. It was 11. We left and I looked back at the barracks and River Moa. I said I will never return there. But was it true?

Augustine’s last chapter: Beyond My Limit  Or scroll down to catch up on earlier posts in the remarkable tale.

I refused to engage with the big, fat soldiers who talked only about their girlfriends. I think they had chosen to ignore that I was only 12 years old. I kept quiet, and laid still pretending not to be listening to their conversation. They mentioned how my brother loved women. His life revolved around bingo, girls, food and his job. The first two choices would make any man poor. The next two choices, I thought then, would make you work endlessly, with nothing to show for it.

It all seemed he was only living hand-to-mouth. But he was respected among his comrades for being brave. In fact, he earned his respect when crossing the high Daru bridge with a 50-kilogram (more than 110 pounds) bag of rice. Once, he could not maintain his balance near the end of the bridge, with no water below. He tumbled down the ledge before finally landing on the bag of rice. He took the bag and made the treacherous climb back onto the bridge.

He earned admiration because his comrades would expect anyone falling that far to die. It is the highest bridge in Sierra Leone.

We went past beautiful towns on our way to Bo. It was my first time seeing beautiful houses, a supermarket, many people walking past each other. We arrived in town about 1:45 p.m. I alighted and thanked them with nothing in my hand.

They had asked me a lot of questions about my school, test results, and why I was heading to Bo. I told them of my ordeal and they felt sympathetic. One of them gave me 30 cents, which was substantial for a small boy, plus the three Leones I already had.

They left me near the police station in the center of town. That was the wrong place.

They told me to go to the No. 3 barracks; if I was lucky I would meet my stepfather, a policeman, there. In haste, I asked them, “Where has he gone to?” One of them pondered before remembering that he was on transfer to Port Loko. This was in the north of Sierra Leone.

I was in tears. I knew then I would have to move back to Motema again, since my mom and step-dad were not there and the schools near Daru wouldn’t accept me because of Duran’s lack of support.

I asked for the direction of Christ the King College (CKC), a powerful secondary school that everyone there knows — where the teachers in Segbwema thought I should go. I walked toward there and it was evening. I joined a group playing soccer. I had no shoes or appropriate pants for games, never mind the interview that I had set for myself. I got to play because I was quite skillful in soccer.

I was smelly with sweat that had dried on my skin without a shower for two days running. I had nowhere to sleep. I walked in town aimlessly, and came back to the school. It was late.

The school campus was fearful. It had a cemetery in the back. I had seen the graves in the evening and feared going to that side. There was a very large crocodile in a small pond between the dormitory and the graves. Some graves were quite close. I refused to go near them. My heart said, “Just sleep here in front of the principal’s office.” But my instincts said, “If the night watchman comes by, he may kill you — so, look for a better place to sleep. If the night watchman knows you are a stranger, he may slay you and dump you to the crocodile at night.”

All sorts of thoughts came to my 12-year-old mind.

It soon started to rain heavily with a gusty breeze blowing, shaking the old roof. I said it was a good thing, because no animal or man would trek out in the rain to capture me. I went to one of the classrooms, but it was locked. I sat in front of the classroom. But I feared for children coming to meet me sleeping at their door. I sleep more in the morning hours. That would have been a disaster.

They would have judged me a street boy, a homeless child, and anything could happen. They could have amused themselves, with my obvious hunger, my mostly tattered clothes and no shoes. I looked like a mad boy. So, I decided not to sleep, but to stay awake.

The breeze was cold with no blanket. I kept praying for daybreak.

It was time for a doze-off. I woke up quickly each time it came. I had no watch to tell the time nor did I have any idea of time without it. I could notice the morning brightening up. I was happy. I started seeing students rushing to their bathrooms through the dormitory windows. They were boarding students preparing for school.

I moved from that position and went around to the pitch out back. The school held its assembly and students dispersed to their classes. I looked for a tap to wash my face and drink some water for a breakfast. Schoolwork had started and the principal was in his office talking with teachers.

I moved toward the office with confidence despite my appearance. I waited at the door. The principal was Mr. Gabriel Amara. His secretary saw me and called to me.

“Can I help you?” she asked in a very loving voice. I explained my ordeal, gave her my name, and she searched for my exam results (which had been sent along from Wesley Secondary). She found them and the principal had written on the envelope, “Admit to attend.”

I saw it and I was pleased — but in tears. Where would I live to go to school? Who feeds me? Who buys my clothes? God will provide, I told myself. What will the interview be like, I wondered within?

The secretary made my case a priority, and I was called into Mr. Amara’s office.

The first question he asked was, “How did you come here?” I explained my whole ordeal, from my previous interview that brought me there and everything in between. He was shocked.

“Do you have someone to live with?” he asked.

“No, sir. My mom and dad lived here but have been transferred to Port Loko. I came on the pretext of living with them, but they’ve gone.”

“You have a very beautiful result,” he said. But, like the other school leaders, he knew I couldn’t live on my own and attend school. I should take my interview fees and head back to my grandmother in Motema. The Yengema Secondary School (YSS) was one of the best Catholic schools in Kono District, he said.

I was happy again. Happy that I was returning to my original place, where they understood my poverty, a place where I could grow and become an educated person someday. My hope was high with the thought of seeing my grandmother again and going to play soccer with friends rather than strangers.

Mr. Amara, as it happened, was leaving to head the Yengema Secondary School (Saint Andrew’s Secondary School was its real name, but people named it after the town). He was looking forward to leaving that weekend. The secretary assured me I’d be accepted in the school if I went in time to see him there. The secretary gave me 50 cents. That plus the 20 cents I had left from earlier was good enough to beg drivers. It was one Leone going to Kono for big people. I was small, so I thought they would take 70 cents.

I left the office. I was heading home from my tour of schools.

It was 10:30 a.m., and I was hungry. I walked to a car park and got a space on the bus for 70 cents. I sat hungry, until an old lady by me bought food and shared with me. I grabbed it and thanked her.

It was satisfying. My journey back to Motema was short. I arrived by 4:30 p.m.

146 thoughts on “The incredible journey of Augustine Kanjia continues … Will My School Dreams Become a Nightmare?”